The Incredible History Of The Late Show's Ed Sullivan Theater 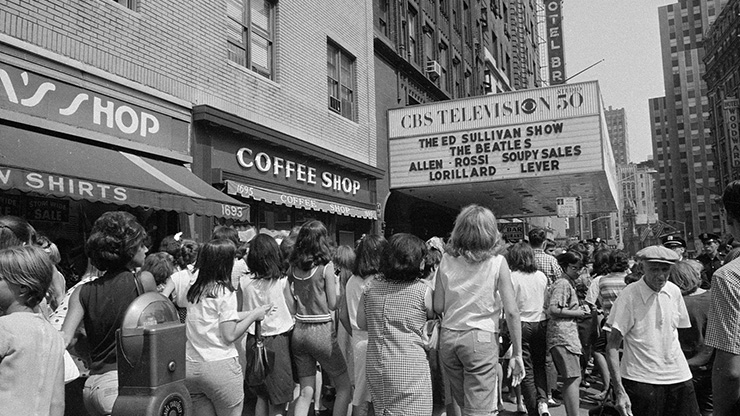 History was built on Broadway.

The historic 13-story theater was built in the 1920s by Arthur Hammerstein. It was initially named the Hammerstein Theatre. Located at 1697 Broadway in Manhattan, the theater first opened its doors on November 30, 1927, after which time it housed performances of musicals. From its inception, the theater has been a place for the highest quality performances and talent, staying true to its mission to celebrate the arts on the busy street of Broadway.

Hammerstein's ownership of the theater ended in 1931. It found a home with CBS in 1935. It was originally used as a radio broadcast station, so CBS tested out names such as Radio Theater #3 and CBS Radio Playhouse.

In 1950, CBS once again transformed the the space. With broadcast television becoming increasingly popular, CBS turned it into a television studio. For the next 17 years, the theater held the name CBS-TV Studio 50. 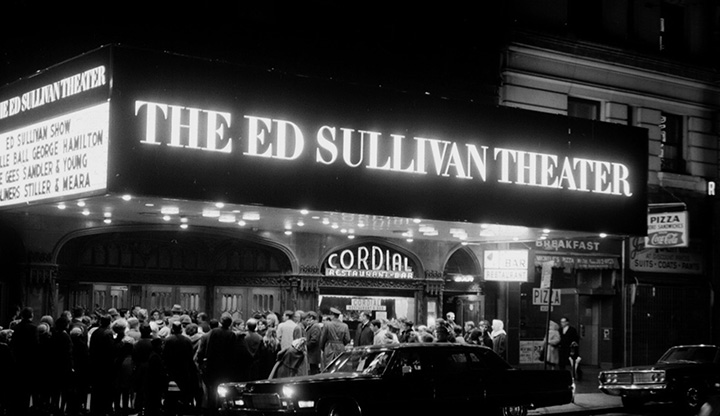 The Ed Sullivan Show was born.

In 1953, CBS welcomed a new face to Studio 50. Unbeknownst to them, this man would one day become not only a household name, but also a historical figure. That man, of course, was Ed Sullivan.

Before he started out at Studio 50, Sullivan had been hosting the show Toast of the Town at CBS's Maxine Elliott Theater. He eventually made the move to Studio 50, and then swapped out the old show name for something much more iconic: The Ed Sullivan Show. The broadcast would go on for 23 years, touching the lives of millions across the nation.

On the show's 20th anniversary, CBS honored Sullivan's legacy with the renaming of the entire theater: it was now called The Ed Sullivan Theater. While many changes would be made to the theater over the next 50 years, the name would remain the same. 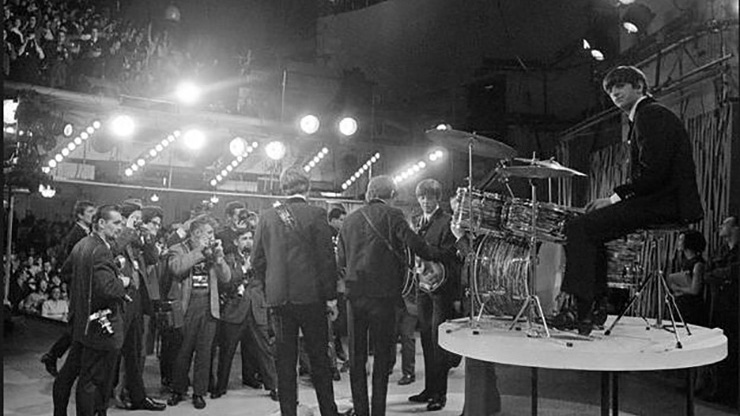 The Beatles made their U.S. debut on The Ed Sullivan Show.

Arguably one of the biggest moments in musical history took place in the Ed Sullivan Theater on February 9, 1964, when The Beatles made their United States television debut. Approximately 73 million viewers tuned in to watch as the boys from across the pond rocked the stage—nearly half of all television-holding households in the country. The band performed hits such as "All My Loving," "Till There Was You," "She Loves You," "I Saw Her Standing There," and "I Want to Hold Your Hand." 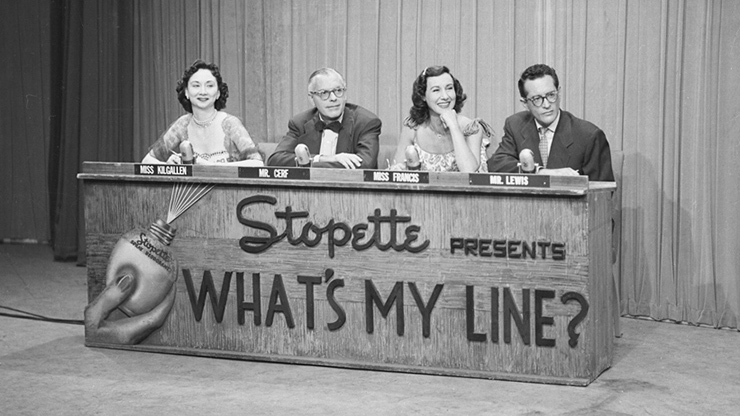 Stars lined up to play on What's My Line?

One of the most popular shows to broadcast out of Studio 50 was a game show named What's My Line?, which aired from 1950 to 1967 on CBS. The show featured a panel of famous authors, actors, poets, politicians, and comedians, all of whom were tasked with determining what visitors did for a living.

The four celebrity panelists would ask the contestant a series of questions in order to narrow down the results. While there was a $50 cash prize available, the game was always intended to be more about fun than money. 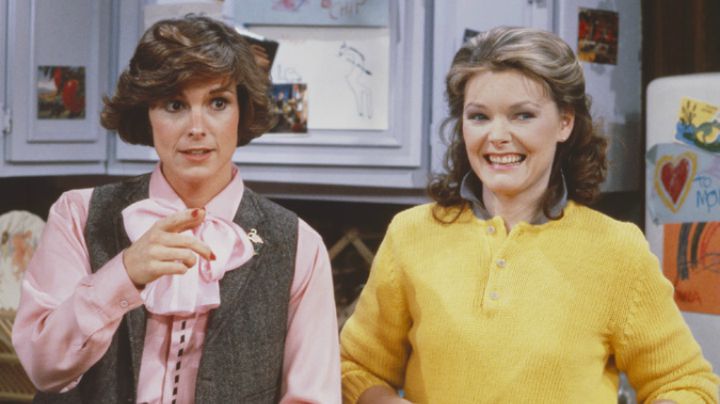 In 1984, CBS welcomed a new show to the Ed Sullivan Theater called Kate & Allie. The sitcom starred Susan Saint James and Jane Curtin, who portrayed two single mothers who chose to move in together to raise their children in Greenwich Village, New York.

For five years, Kate & Allie kept America laughing and celebrating strong women and the beauty of friendship and motherhood. 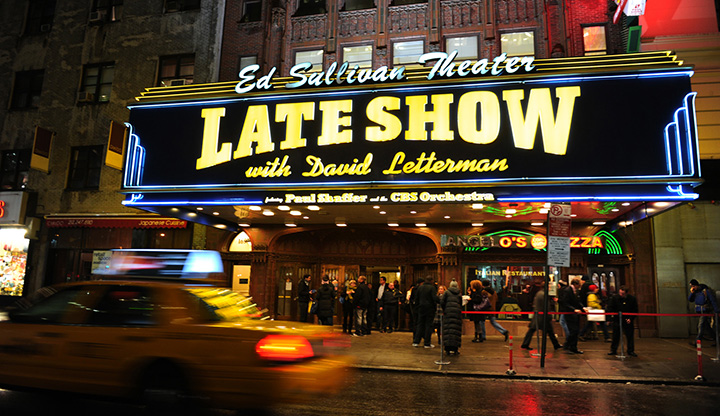 CBS purchased the iconic building for $4 million in 1993 to accommodate its newest headliner, David Letterman. The studio was redesigned to fit 400 audience members, and The Late Show with David Letterman was born.

For the next 22 years, Letterman would air out of the Ed Sullivan Theater. With his timeless humor and hard-hitting interview questions, Letterman will be remembered as one of the most influential men in late night television. 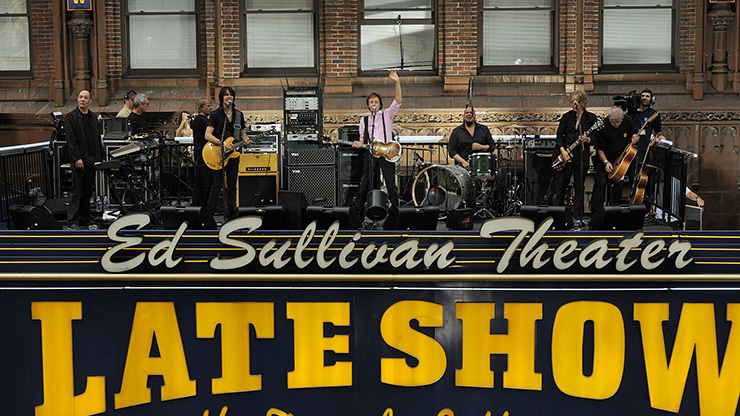 From The Beatles to The Rolling Stones, the Ed Sullivan Theater has featured a number of talented musical appearances in house. But did you know that the theater is also home to rooftop concerts?  Some of the lucky artists who got to perform atop the marquee include Dave Matthews Band, Phish, Sir Paul McCartney, Eminem, and Jay-Z. 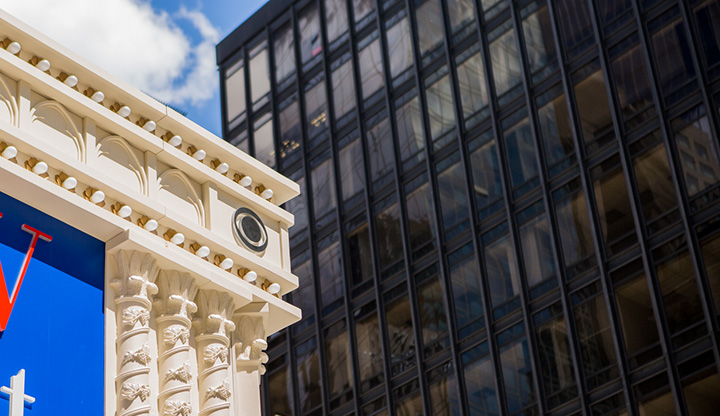 The theater welcomes its newest star.

Letterman ended his 22-year long stint hosting The Late Show at the Ed Sullivan Theater on March 20, 2015. Stephen Colbert would be taking over the nightly slot and carrying on Letterman's Late Show legacy. Today, Colbert's marquee illuminates Broadway as fans eagerly await the debut of The Late Show with Stephen Colbert on September 8, 2015.

It's been over 60 years since Ed Sullivan first filmed his show. During that time, Americans have marveled as thousands of talented people passed through the Ed Sullivan Theater—television hosts, stars, and guests. Despite all of the changes, one thing has remained the same: The theater continues to inspire millions, keeping the magic of late night going.

Next week, the full marquee for Stephen Colbert's new show will be unveiled. Come back then for your first look at this historic changing of the guard!