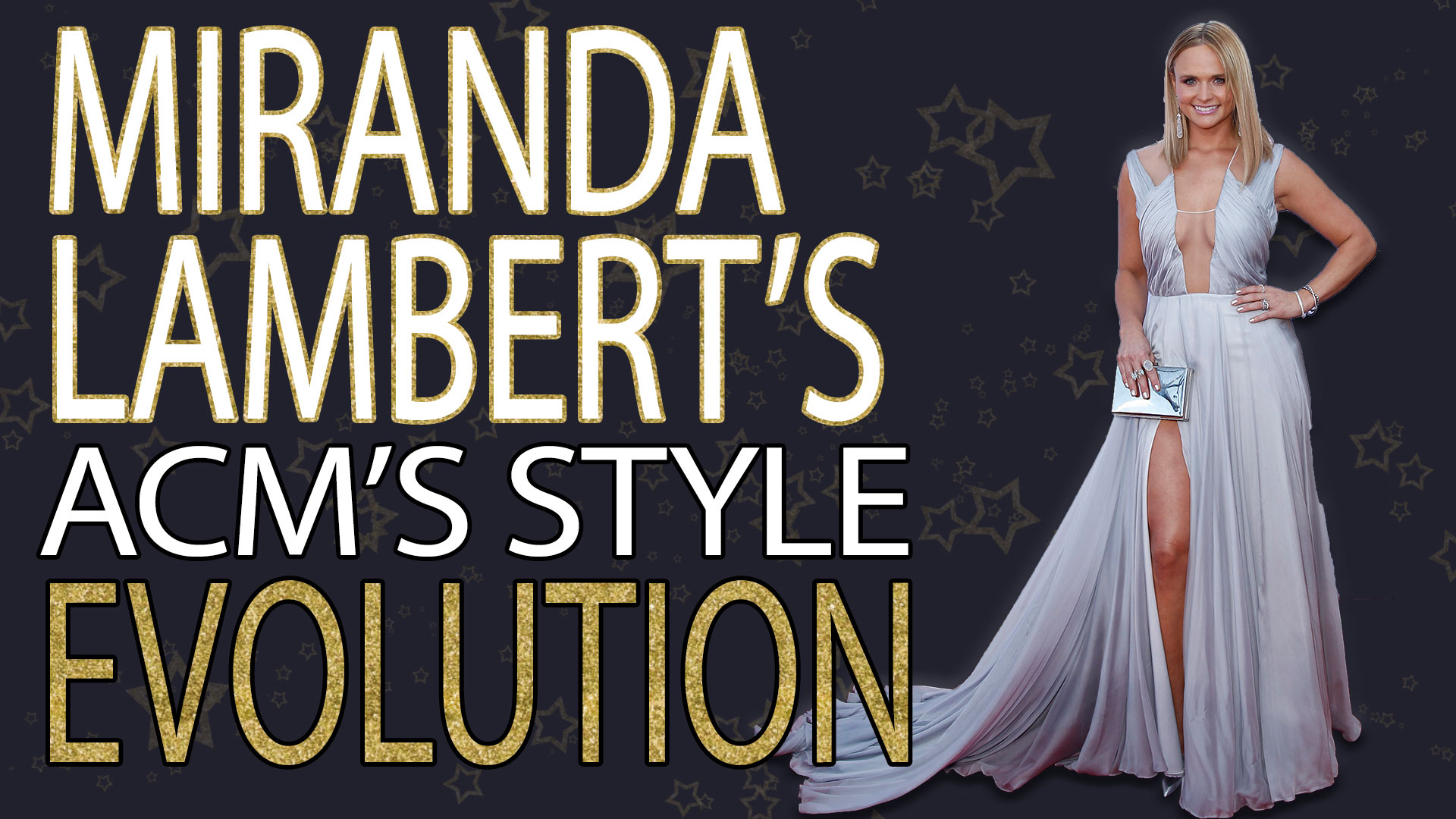 Ever since Miranda Lambert exploded like "Gun Powder & Lead" onto the country music scene in 2005, she’s been a fixture on the Academy of Country Music Awards red carpet.

While Ran Fans will have to wait until April 3 to see her latest ACM look, there’s no doubt that she’ll be hotter than Kerosene. Let's take a look back at some of Ms. Lambert's hottest ensembles before she inevitably gets jaws droppin' on the red carpet before the 51st Annual Academy of Country Music Awards on Sun, April 3 at 8/7c or stream it live on CBS All Access. 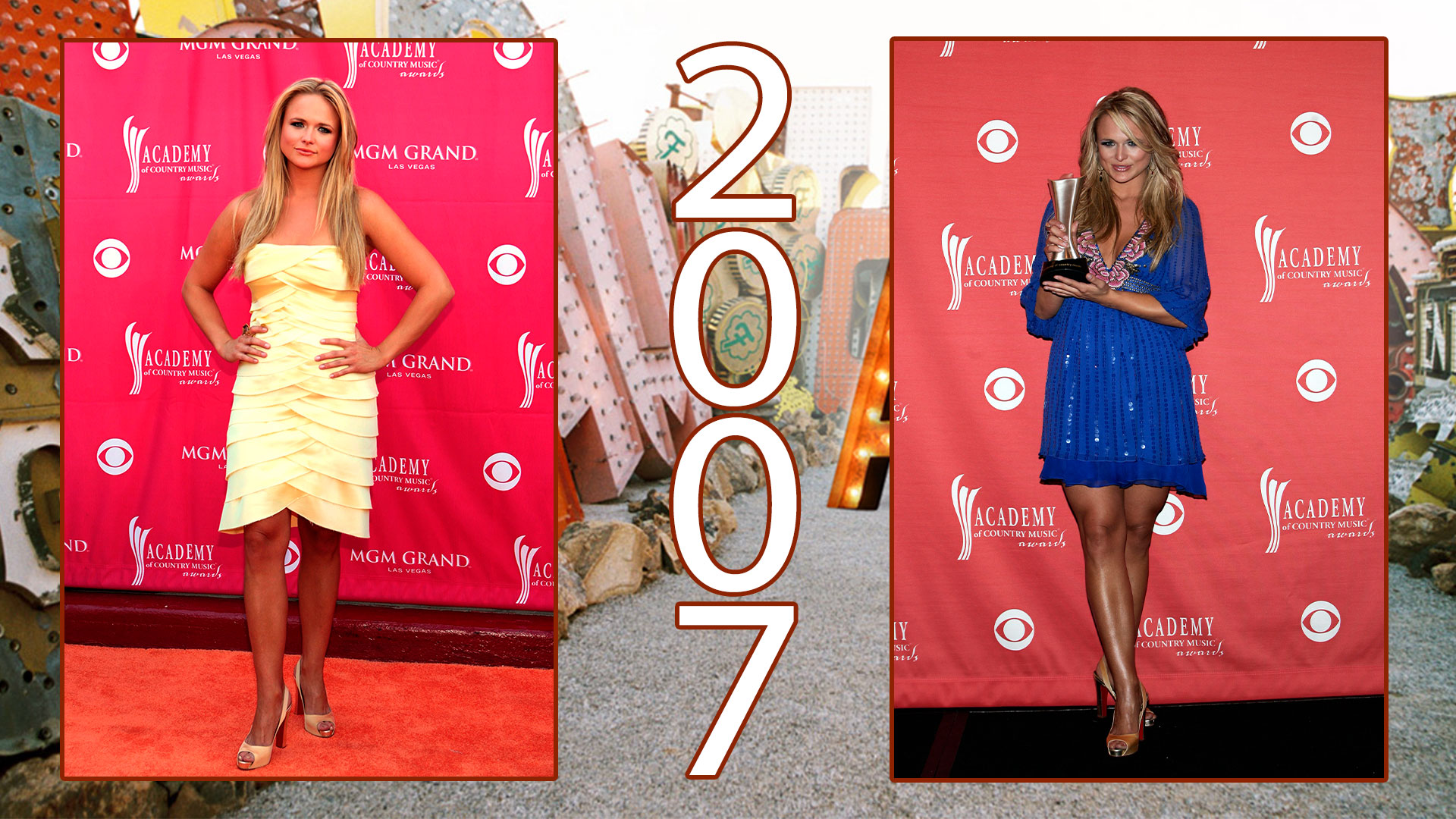 Pre-show: Before the show, Miranda walked down the ACM orange carpet in nude heels and a light yellow minidress with layered ruching.

Post-show: Miranda showed off her Top New Female Vocalist Of The Year trophy while wearing a blue Jenny Packham minidress with a plunging neckline that featured detailed floral embellishments. Cinched at the waist, the flowy, long-sleeved dress was paired with simple hoop earrings and nude heels. 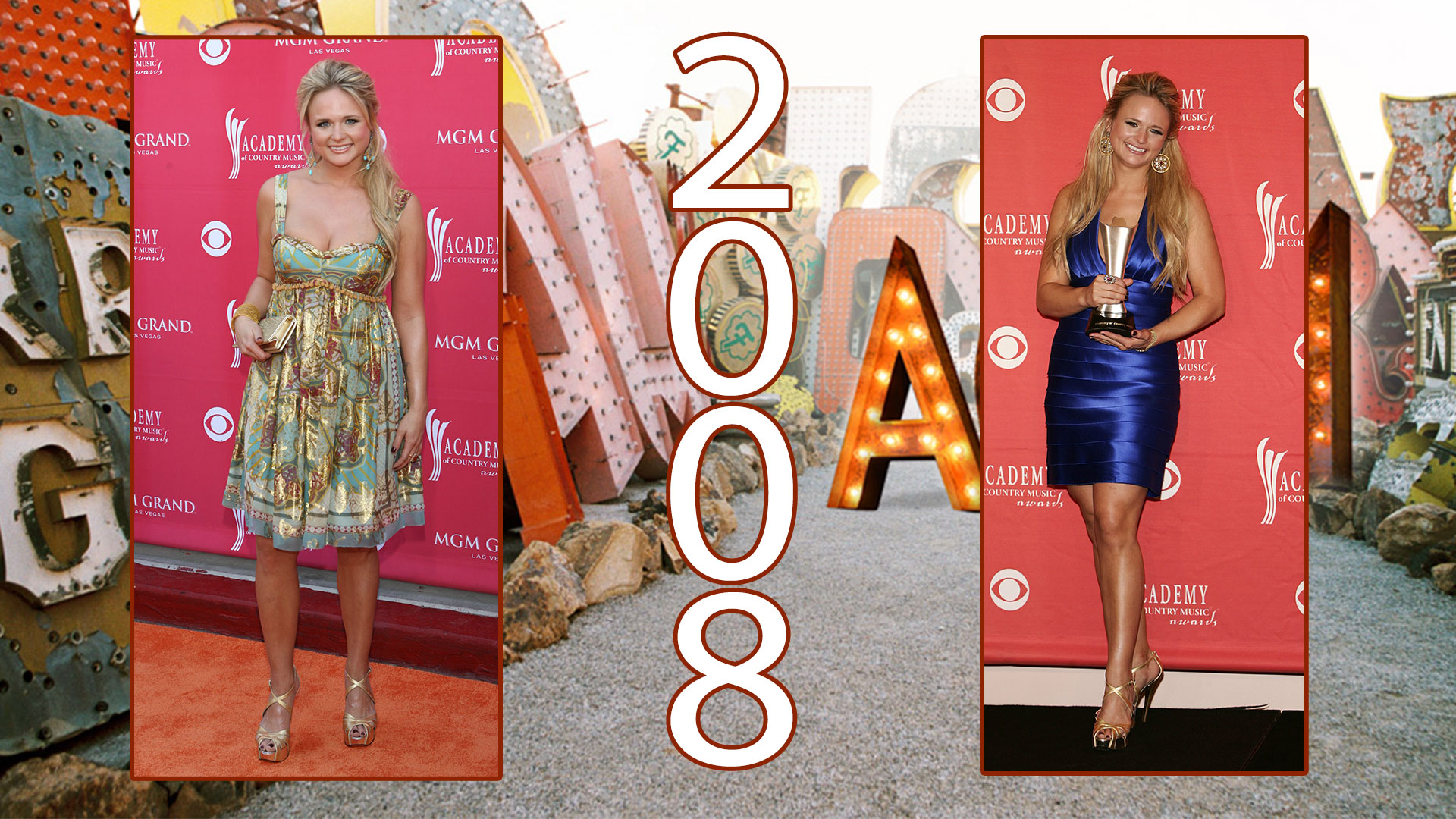 Post-show: Lambert clutched her Album Of The Year trophy for Crazy Ex-Girlfriend while donning a cobalt-blue, body-hugging minidress. She accessorized the outfit perfectly with shiny gold shoes, sparkly earrings, and, of course, that impressive ACM Award. 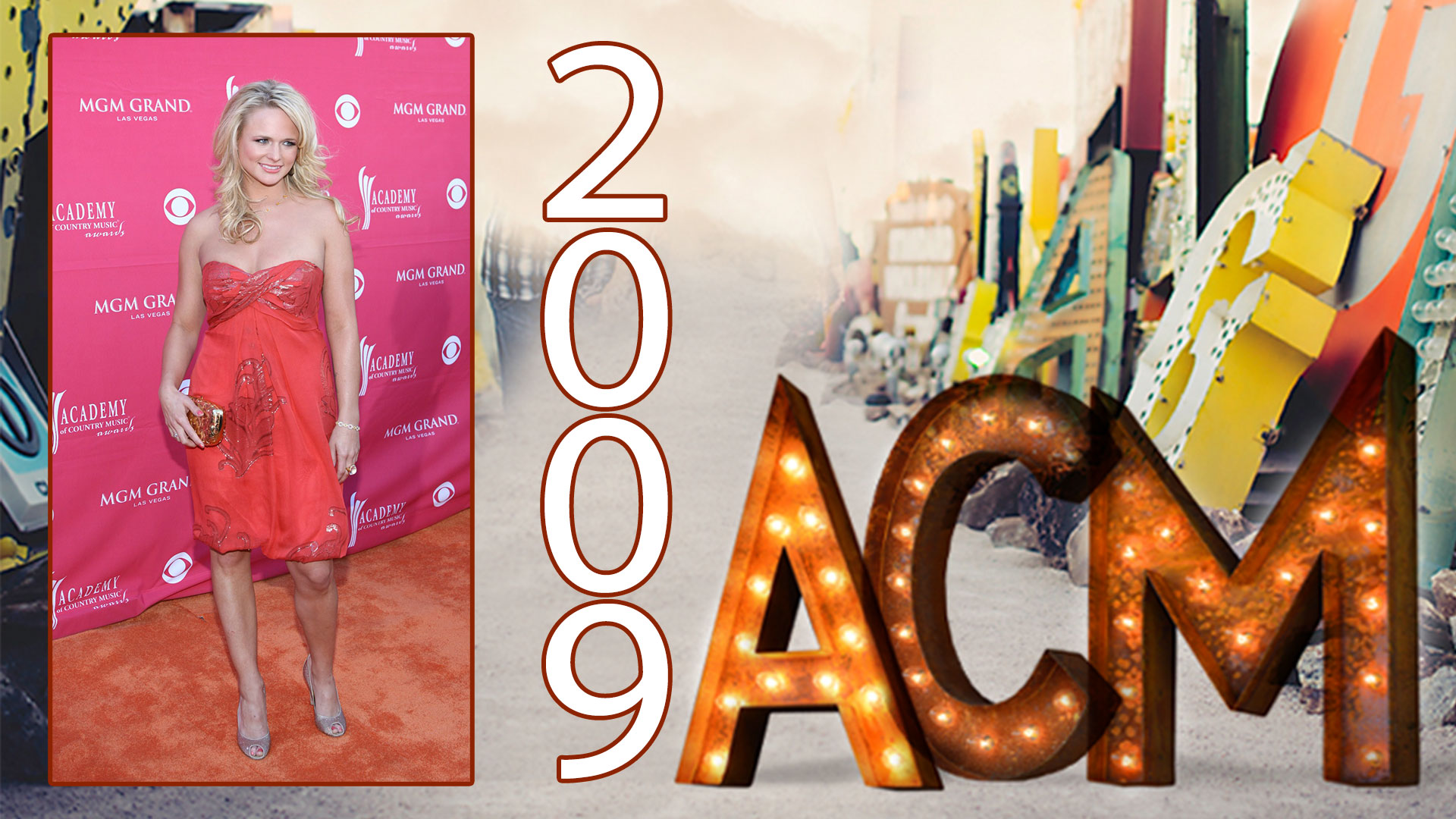 Miranda Lambert was the "Virginia Bluebell" of the ball in 2009. 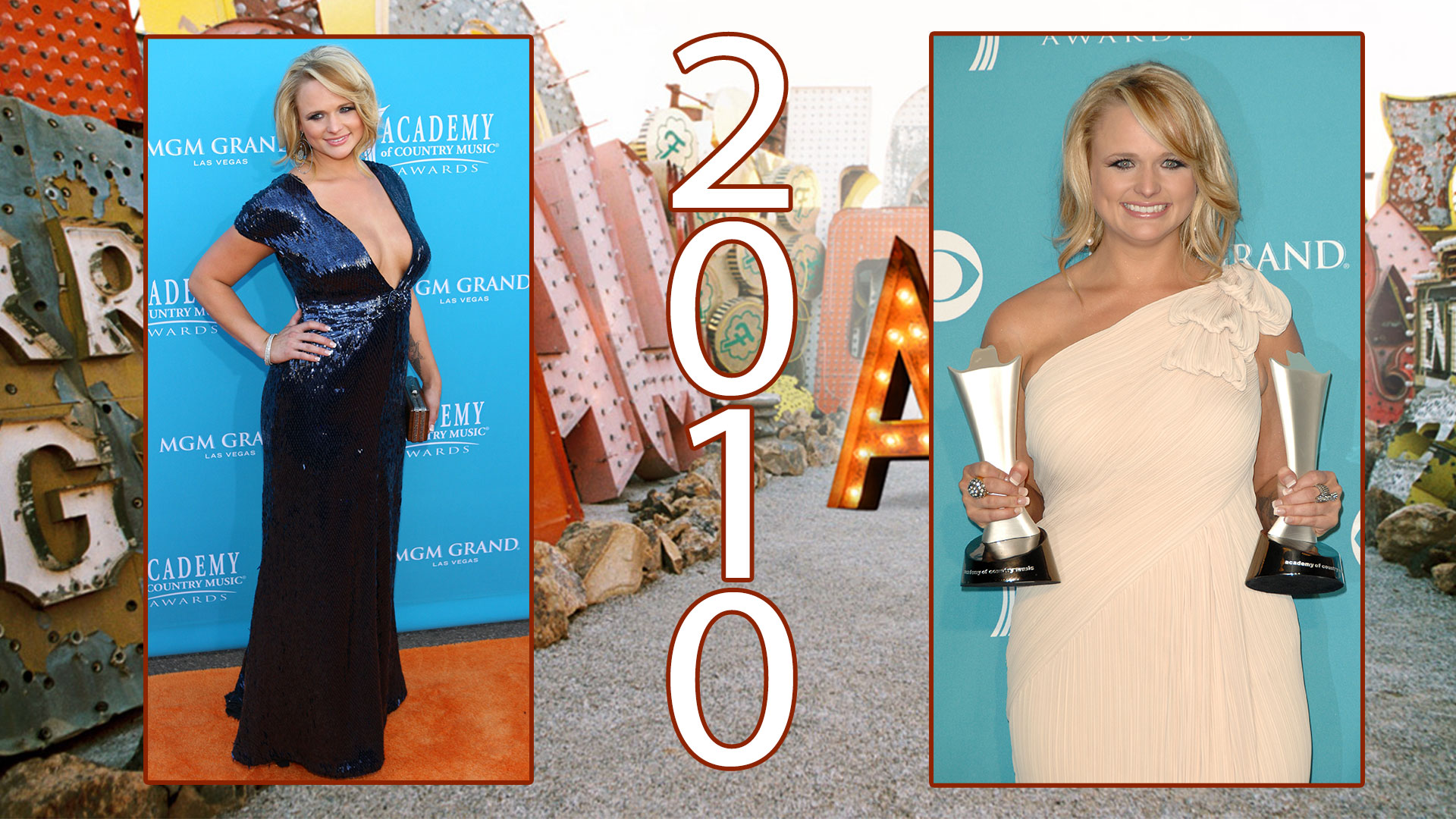 She continued her fashion revolution 2010.

Pre-show: In 2010, all eyes were on Miranda as she shimmered down the ACM red carpet in a blue sequin-adorned Pamella Roland v-neck gown.

Post-show: After accepting ACM Awards for Album Of The Year Award and Video Of The Year, Miranda posed with her statues in a one-shoulder, beige column dress by Tadashi Shoji. 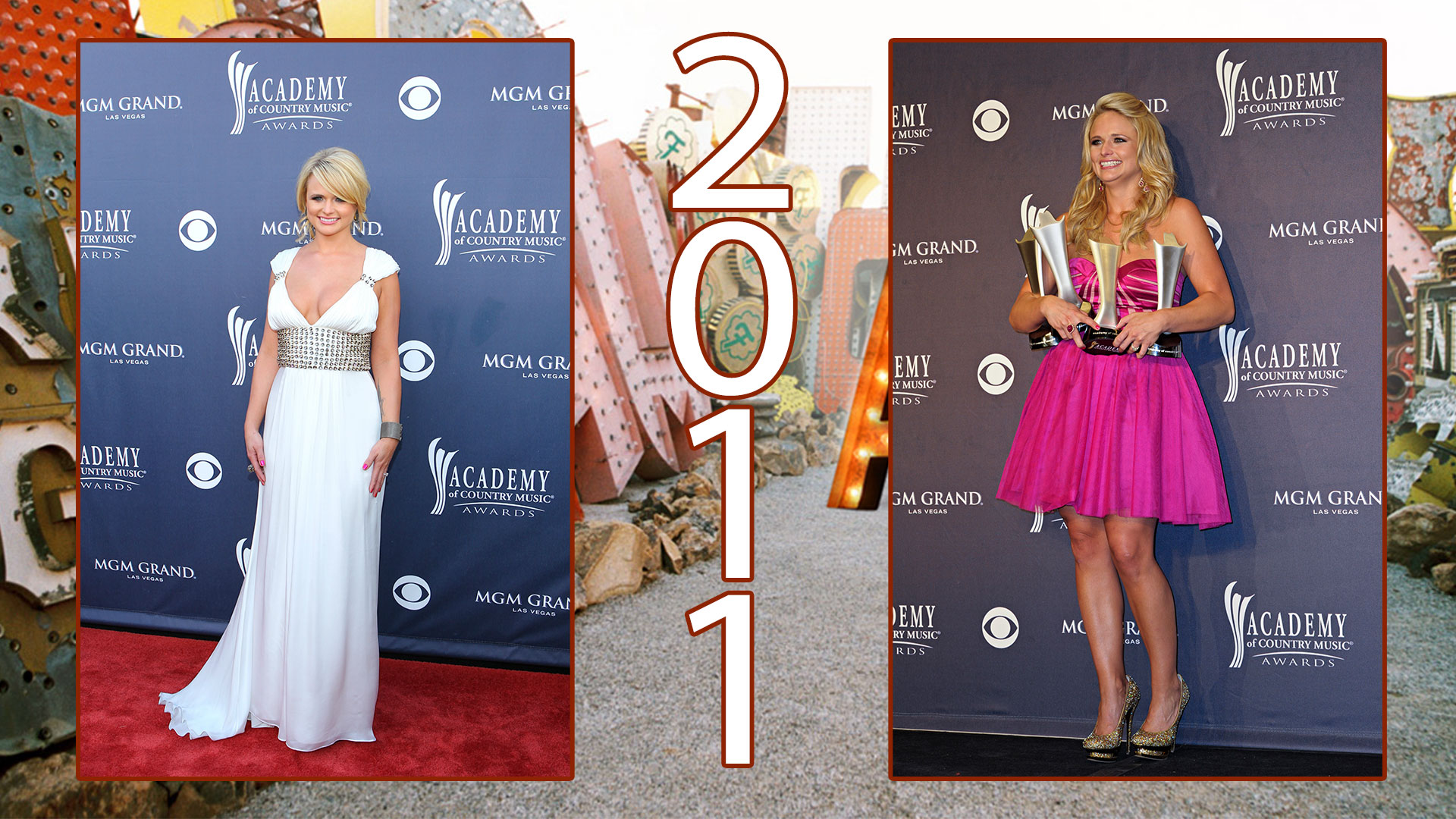 It's easy loving both of Miranda's 2011 ACM looks.

Pre-show: All tied up with a dramatic studded belt, Miranda posed for the red-carpet cameras in a white, empire-waist Lorena Sarbu gown. The blonde songstress accented the dramatic v-neck dress with silver pumps and a matching cuff bracelet.

Post-show: At the end of the night, Miranda let her hair down and put on a hot-pink, sweetheart-neck dress designed by Aidan Mattox. The only things that almost out-shined this satin strapless frock were her four Academy of Country Music Award trophies, including wins for Single Record Of The Year, Song Of The Year, Video Of The Year, and Female Vocalist Of The Year. 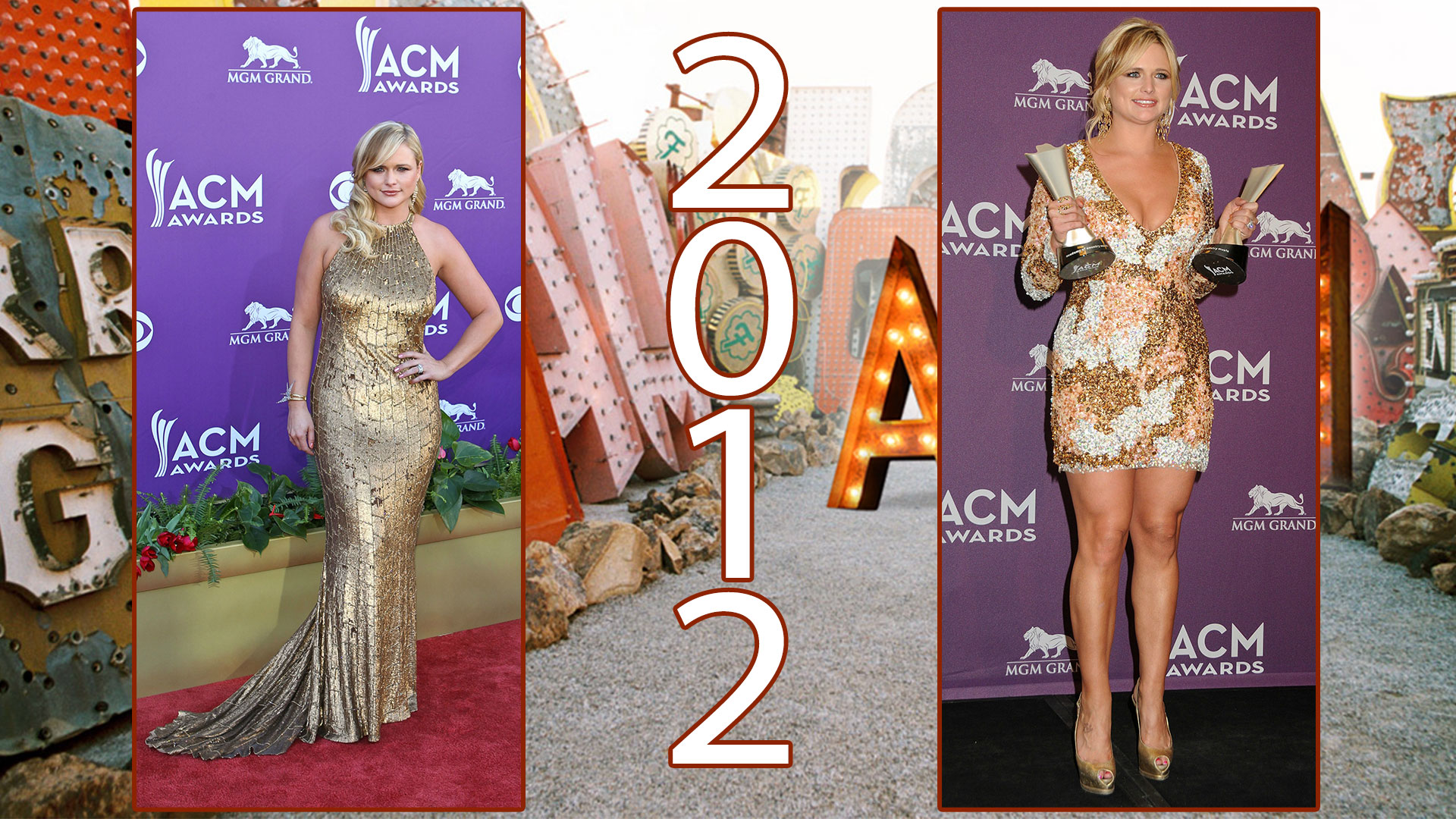 Miranda looked nearly too good to be true in 2012.

Post-show: Wearing gold pumps that matched her two ACM trophies—one for Female Vocalist Of The Year and another for Album Of The Year—Lambert stunned in a heavily-beaded, long-sleeved minidress designed by Jovani. 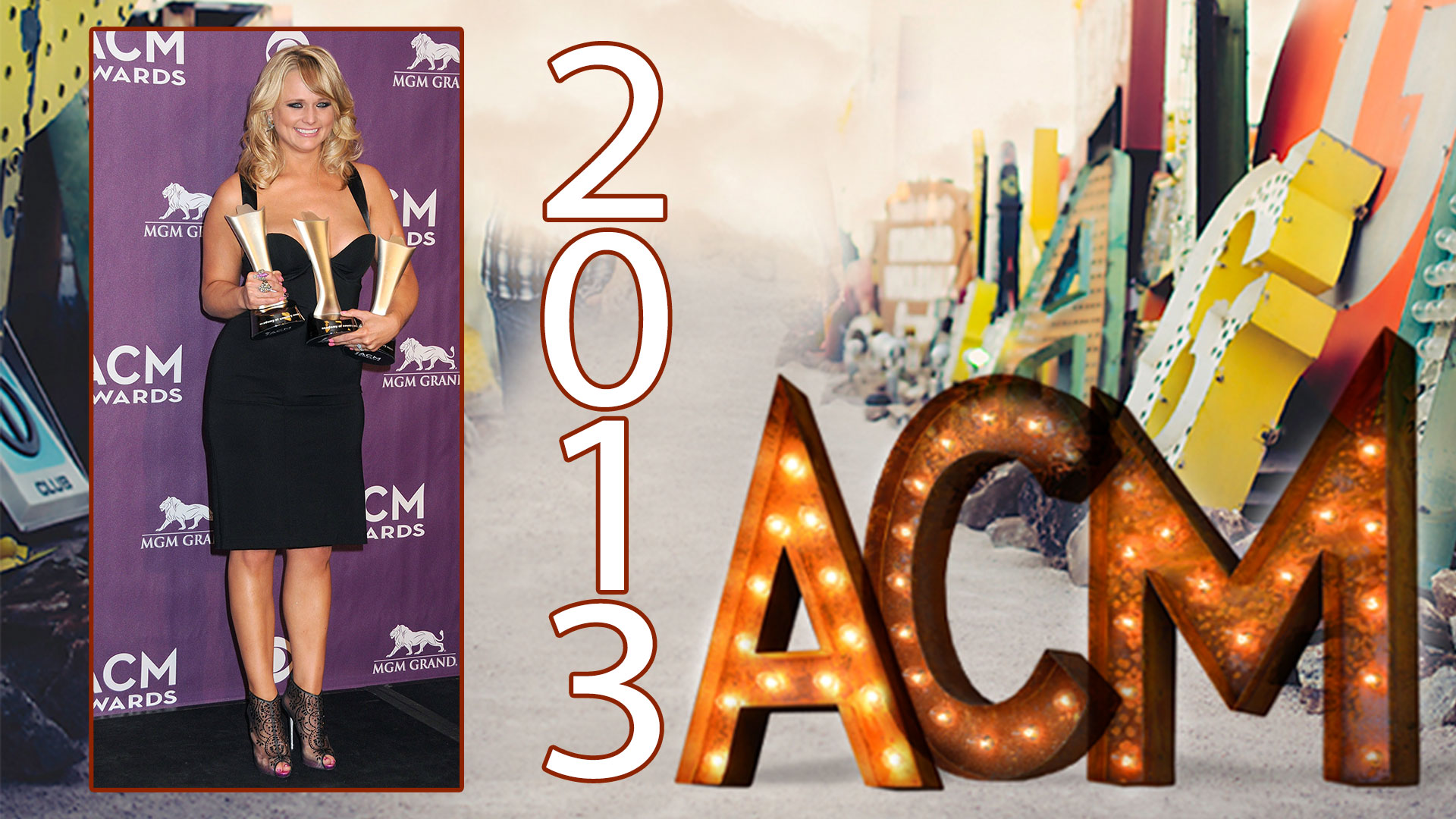 In 2013, Miranda proved her style just keeps getting better.

It's no wonder the Southern beauty was all smiles on the post-show red carpet; she won three Academy of Country Music Awards, including Female Vocalist Of The Year Award for the fourth consecutive year. Rocking a LBD by Willow paired with black lace René Caovilla booties, Miranda couldn't stop beaming. 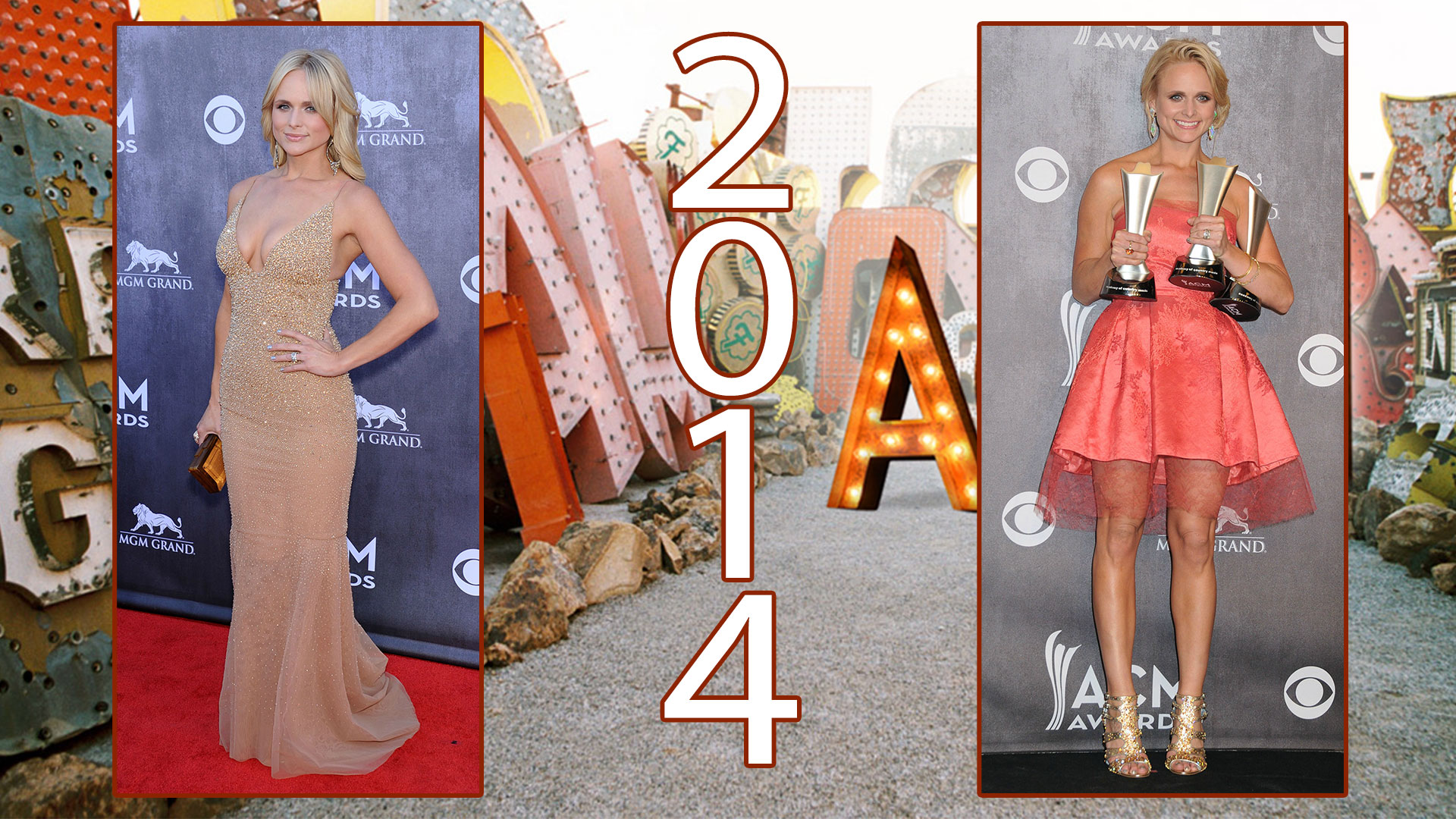 Pre-show: With a small box-shaped clutch and shoulder-length earrings, Miranda started the evening in a nude, crystal-embellished Randi Rahm gown with a plunging neckline.

Post-show: In the press room after the event, the blonde songstress held on to three new ACM statues while opting for a strapless coral party dress, gold heels, and a low side chignon hairdo. 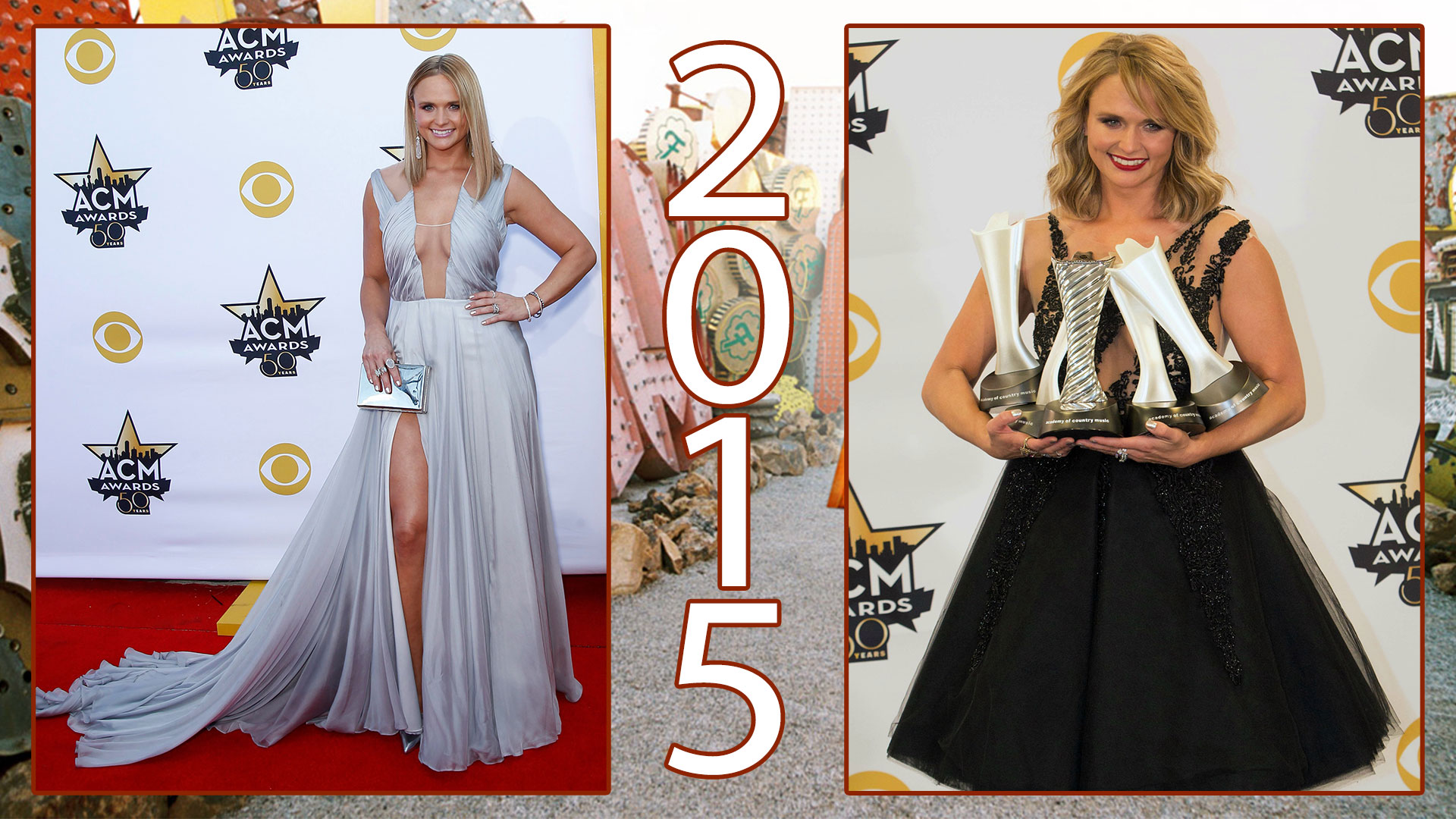 In 2015, Miranda proved platinum goes with everything.

Pre-show: Owning the red carpet at the golden anniversary of the Academy of Country Music Awards, Miranda opted for a plunging silver Bibhu Mohapatra gown from the Fall/Winter collection and accessorized the dress with Kimberly McDonald jewels.

Post-show: Following Country Music's Party Of The Year®, Miranda appeared in the press room carpet in a layered tulle, A-line black dress. The bodice was adorned with black beads that were placed perfectly and made Lambert's loose locks and red lipstick pop. Finally, Miranda paired her LBD with the ultimate accessories: five shiny new ACM Awards.

To see how many ACM Awards the Platinum songstress wins this year, watch The Academy of Country Music Awards when it's broadcast live from the MGM Grand Garden Arena in Las Vegas on Sunday, April 3 at 8/7c. Plus, the event will be streamed on CBS.com and CBS All Access. 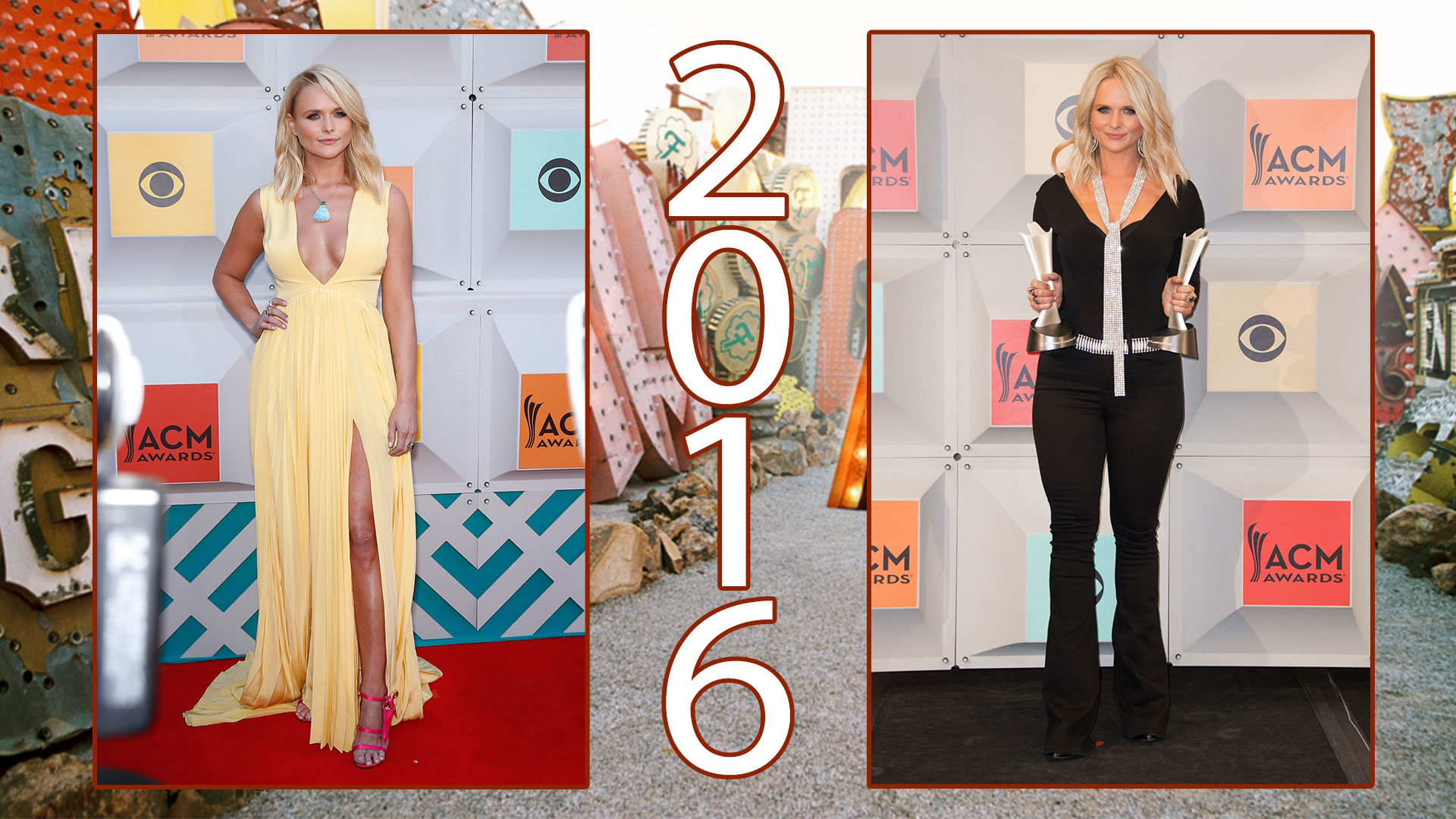 Pre-show: Miranda Lambert stepped onto the 2016 Academy of Country Music Awards red carpet in a yellow empire-waist Christian Siriano gown, which featured a dramatic plunging and a thigh-high slit. The 2016 Female Vocalist Of The Year winner—who won the award for the seventh year in a row!—then paired the dress with a turquoise statement necklace and hot pink Joyce Echols stilettos that had a tiny gun holster and shiny gold revolver.

Post-show: Later in the night, Lambert, in a Kimora Lee Simmons sexy black romper, partnered with Keith Urban and ZZ Top guitarist Billy Gibbons to perform the classic-rock anthem "Tush." With a silver sparkling belt and a matching necktie, Lambert looked every bit the rockstar singing the ZZ classic.