Use the form below to send us your comments. If you are experiencing problems, please describe them.
Player Help | All Access Help
S2 E5 46min  TV-14
The loss of life from the 1987 crash of Northwest Airlines Flight 255 was the second greatest loss in the history of US aviation. Yet there was one survivor, a four-year-old girl. Just as improbable and shocking as her survival is the reason why the plane fell to the earth just seconds after takeoff. Relive the aircraft's tragically brief but deadly flight, and discover, through investigators' painstaking research, the series of events and shocking blunders that claimed 156 lives. Air Date: Jul 15, 2012
Now Streaming 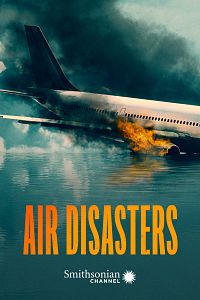 Subscribe
S2 E1 Cracks in the System
A sunny day in Miami Beach, 2005, turns tragic when a seaplane crashes into the water in front of hundreds of tourists. All 20 people aboard the flight are killed, including a VIP of Bacardi, Ltd. The rum company's outspoken stance against the Cuban government brings the FBI into the investigation, but the reasons behind the crash prove far more troubling. Unravel the mystery of Chalk's Ocean Airways Flight 101, and see how the first fatal incident in the airline's history ultimately grounds the company for good.
Jun 17, 2012 46 min TV-14

Subscribe
S2 E2 Target is Destroyed
In 1983, a downed passenger jet escalates tensions between two superpowers, the US and the USSR, to an all-time high. The plane in question: Korean Airlines Flight 007, en route from New York to Seoul. After being shot down by a Soviet fighter jet, an anxious investigation ensues, one mired in secrecy and deception. Would this disaster be the Cold War's version of the Lusitania, or were the Soviets justified in their attack? It's a race against time to find answers before this crash leads to an all-out war.
Jun 24, 2012 46 min TV-14

Subscribe
S2 E3 Cruel Skies
An invisible microburst within a mile of a runway. Volcanic ash 35,000 feet above the Indian Ocean. In a heartbeat, nature can turn a routine flight into a fight for survival. Relive four pivotal aviation disasters and near misses that ultimately forced the industry to better protect our planes from severe weather encounters. Enter NOAA's National Weather Service Aviation Weather Center, and see how dedicated meteorologists, using state-of-the-art tracking equipment, have become every pilot's first line of defense against Mother Nature.
Jul 01, 2012 46 min TV-14

Subscribe
S2 E4 Panic on the Runway
How does a survivable airline emergency turn into one of British aviation's most horrific disasters? Investigators face this question after 55 passengers perish aboard a plane that never even leaves the ground. Experience the tragic events that befell Airtours Flight 28M in 1985, and see how an engine fire proved far less deadly than the toxic fumes it produced. The findings of this catastrophe led to sweeping changes in the design of commercial aircrafts to increase passengers' survival chances in the future.
Jul 08, 2012 46 min TV-14

Subscribe
S2 E5 Alarming Silence
The loss of life from the 1987 crash of Northwest Airlines Flight 255 was the second greatest loss in the history of US aviation. Yet there was one survivor, a four-year-old girl. Just as improbable and shocking as her survival is the reason why the plane fell to the earth just seconds after takeoff. Relive the aircraft's tragically brief but deadly flight, and discover, through investigators' painstaking research, the series of events and shocking blunders that claimed 156 lives.
Jul 15, 2012 46 min TV-14

Subscribe
S2 E6 Cold Case
In March of 1992, a commuter plane fails to lift off from a LaGuardia Airport runway and plunges into the icy waters of Flushing Bay. For Canadian investigators, the news is as shocking as it is maddening. They had completed an investigation of an identical crash in 1989, and had outlined steps to prevent it from happening again. Witness the weather and operating conditions that doomed Air Ontario Flight 1363 and the exhaustive investigation that followed. Then discover why the disaster in New York, which claimed 27 lives, never should have happened.
Jul 22, 2012 46 min TV-14

Subscribe
S2 E7 Pilot vs Plane
It was supposed to be the pride of France but the Airbus A320 would become a national embarrassment after crashing at an airshow on its maiden passenger flight. Investigators are under heavy pressure to determine why the world's most sophisticated passenger jet failed. The conclusion they reach is a controversial one, and remains so to this day. Revisit the 1988 crash of Air France Flight 296, and see how hasty planning, a risky flight maneuver, and a high-tech computer designed to ensure a plane's safety, all contributed to the tragic accident.
Jul 29, 2012 46 min TV-14

Subscribe
S2 E8 System Breakdown
Our air traffic control system has reached a breaking point. There are simply too many planes in the sky and the tools on the ground are in dire need of upgrading. Take a harrowing journey into the past, aboard five flights doomed by communication breakdowns, and chart the changes these air disasters forced. Then peek into the future as we join FAA test pilots experimenting with NextGen, a whole new system of air traffic control. If successful, it will greatly ease the mounting stress in control towers, and ultimately save countless lives.
Aug 05, 2012 46 min TV-14

Subscribe
S2 E9 The Final Blow
Just minutes from Strasbourg Airport, an Airbus A320 crashes into a vast mountainous region. Before paramedics can search for survivors or investigators can search for answers, they must first find the plane. Witness how Air Inter Flight 148 became lost in the snowy forest of the Vosges Mountains and the alarming discoveries made once the wreckage was discovered. The findings reveal dangerous differences between the Airbus A320 and other passenger jets, leading to sweeping changes in pilot training and the cockpit console's design.
Aug 12, 2012 46 min TV-14

Subscribe
S2 E10 Cleared for Disaster
At LAX, one of the busiest airports in the world, the unthinkable happens. As one plane prepares for takeoff, another prepares to land - on the same runway. In 1991, the fatal collision of US Air Flight 1493 and Skywest Flight 5569 sent fear into the hearts of air travelers. How could two aircrafts be assigned to the same runway at the same time? How did the pilots not see the other plane? We go from the control rooms to the cockpit to the tarmac to reveal how this tragedy happened and what's being done to prevent it from happening again.
Aug 19, 2012 46 min TV-14
Show More