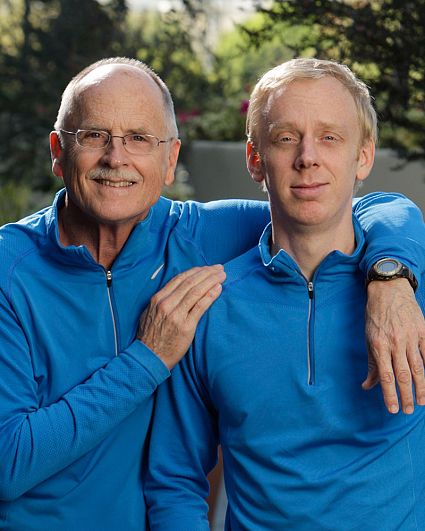 Mike and Mel had a pretty typical family life until Mike was 11 years old, which is when Mel told the family that he was gay. Mel and Mike’s mother remained married until Mike and his sister, Erinn, went to college. Mel is now married to his life partner of 27 years, Gary Nixon.

Mike works as a writer, director and actor in Los Angeles. His writing credits include the feature films "Nacho Libre" and "School of Rock," in which he also starred opposite Jack Black and Sarah Silverman, as well as the television series "Pasadena." Mike and Mel are eager to spend some quality time racing around the globe. Mike describes himself as entertaining, thoughtful and “ridiculously pale.” These two might not be the most physical team on the Race, but they’ll surely compensate with their wit and communication skills.

Mel, a gay-rights activist, has worked as a writer, professor, filmmaker and a pastor and is eager to have a once in a lifetime experience with his youngest child. He’s confident that his people skills will give him an advantage over some of the other Racers. He describes himself as energetic, caring and passionate and enjoys scuba diving and racquetball. When asked who he would model his style of game play after, he pointed to Season 7 winners Uchenna and Joyce, while Mike will model his game play after the "never say die" attitude of Charla and Mirna.

Mike and Mel are well-traveled, opinionated and huge fans of the Race.