Find Out How To Watch Big Brother: Over The Top On CBS All Access

Learn about the BB:OTT elements that are totally unique to this unprecedented multi-platform experience.
Sad that Season 18 of Big Brother has come to an end? Not ready to stop watching the Big Brother Live Feeds?


In addition to enjoying familiar BB events like Head of Household (HOH) competitions, Power of Veto (POV) competitions, and Live Eviction ceremonies, fans will interact with new BB:OTT elements that are totally unique to this unprecedented multi-platform experience:

Weekday Replay: A quick recap of all the crucial moments that happened throughout the day
When: Mondays, Tuesdays, Thursdays and Fridays at 10 PM ET / 7 PM PT

Weekly Full Episode: A rundown of the week's events, followed by the live eviction ceremony
When: Wednesdays at 10 PM ET / 7 PM PT

Safety Ceremonies: The HOH will reveal the Houseguests who are safe for that week, culminating in the live reveal of the nominations
When: Saturdays and Sundays at 10 PM ET / 7 PM PT

Live Diary Room Sessions: In a Big Brother first, fans will get a live look into the confessionals
When: Tuesdays and Fridays at 10:30 PM ET / 7:30 PM PT

Big Brother Winner Chosen By Fans: Fans will vote for the winner of Big Brother: Over the Top
When: Day and date to be announced soon

America's Vote: America will have the opportunity to impact the game like never before and affect nominations, evictions, and game-changing twists
When: See details below 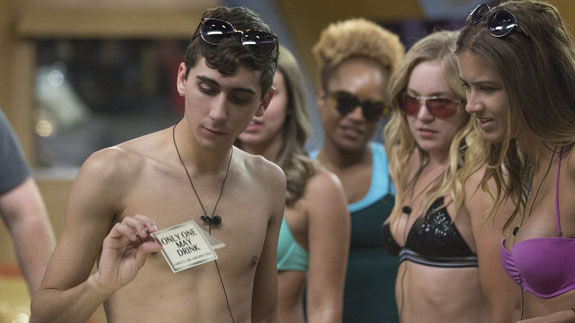 Here's a breakdown of each vote:

America's Nominee Vote: The HOH will nominate two Houseguests for eviction and, for the first-time ever, fans will have the opportunity to choose a third Houseguest to join them on the block.
Voting opens: Sunday at 11 PM ET / 8 PM PT

America's Eviction Vote: In addition to the house's eviction votes, fans will cast one united vote for which of the three nominated Houseguests should be evicted. The nominee who receives the most eviction votes from America will receive one extra vote during the eviction ceremony.
Voting opens: Tuesday at 5 PM ET / 2 PM PT

Through CBS All Access, Big Brother: Over the Top will be available to stream online at CBS.com, on mobile devices and tablets via the CBS App for iOS, Android and Windows 10, and on Roku Players, Apple TV, Xbox One, Chromecast, Android TV, Amazon Fire TV and Fire TV Stick, with more connected device platforms coming soon.