Scott And Jason Give Whitney A Birthday Lapdance On Big Brother: Over The Top

With some creativity and a few found items, the HGs did their best to make the big 2-2 a birthday Whitney wouldn't forget; and, thanks to a seductive display by Scott and Jason, we doubt she ever will.

In fact, we wouldn't be surprised if she continued to see some of these visuals in her dreams—and possibly her nightmares.

The Southern Belle's birthday fell under Scott's reign as HOH, so it's no wonder he decided to start his striptease perched at the top of the winding staircase, at which point he flung his Hawaiian shirt open to start his routine. 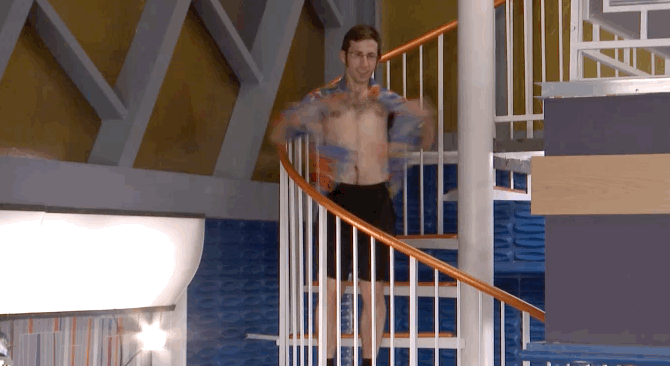 But the seduction didn't end there.

Things really started heating up when Scott dropped trou and shook his money maker while Whitney remained pleasantly mortified in her chair.

We're not sure if Scott was attempting to twerk or whether he thought doing the Funky Chicken was sexier, but, either way, Channing Tatum might want to take note of this... um... unique choreography for future Magic Mike sequels.

READ: Watch The Big Brother: Over The Top Houseguests Bust A Move

After Scott made his mark on Whitney's special day, Jason joined in the fun and busted out the kind of moves that would've made his Whackstreet Boys bandmates blush.

Has Jason been taking advantage of the yoga equipment, because homeboy is all kinds of flexible!

For more hilarious moments that include varying degrees of undress, check out the Big Brother: Over the Top Live Feeds, which stream 24/7.