All The Times America's Vote Rocked The Big Brother: Over The Top House

Ever since Big Brother: Over the Top started, the show's been all about including America in the game play. Let's look back at all the times America's vote rocked the BB:OTT house and rattled the Houseguests' strategies and expectations! 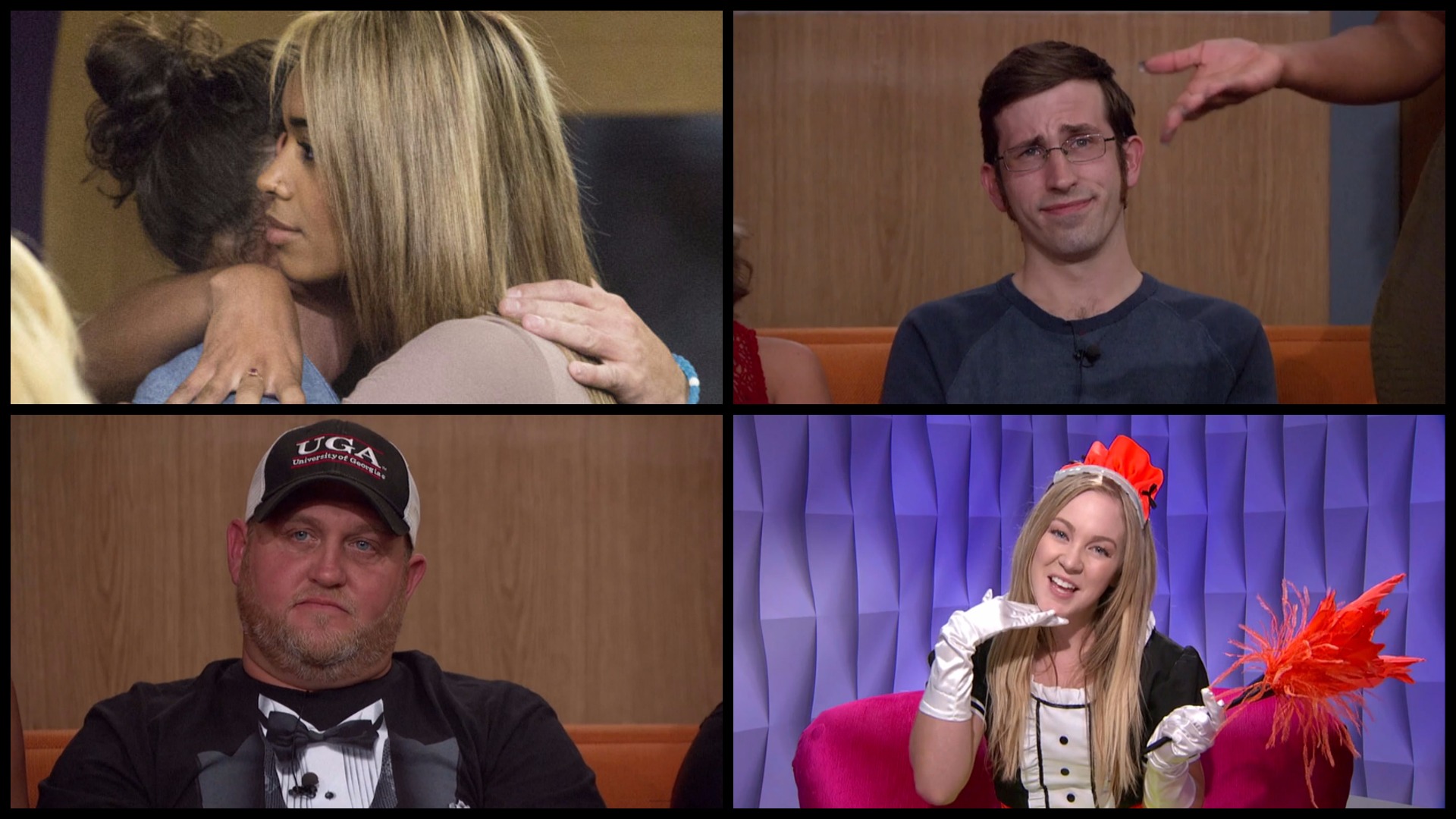 America sure knows how to shake things up.

Big Brother: Over the Top has given America a whole lot of power this season, from voting for a third eviction nominee each week and then placing an actual vote for eviction to giving away game advantages and choosing three Have-Nots each week.

As a result, with each big game move America has orchestrated since premiere night, the BB:OTT house has been left quaking in its collective boots.

Let's look back at the most interesting and unexpected moves made by America, so far, that rocked the house to its core! 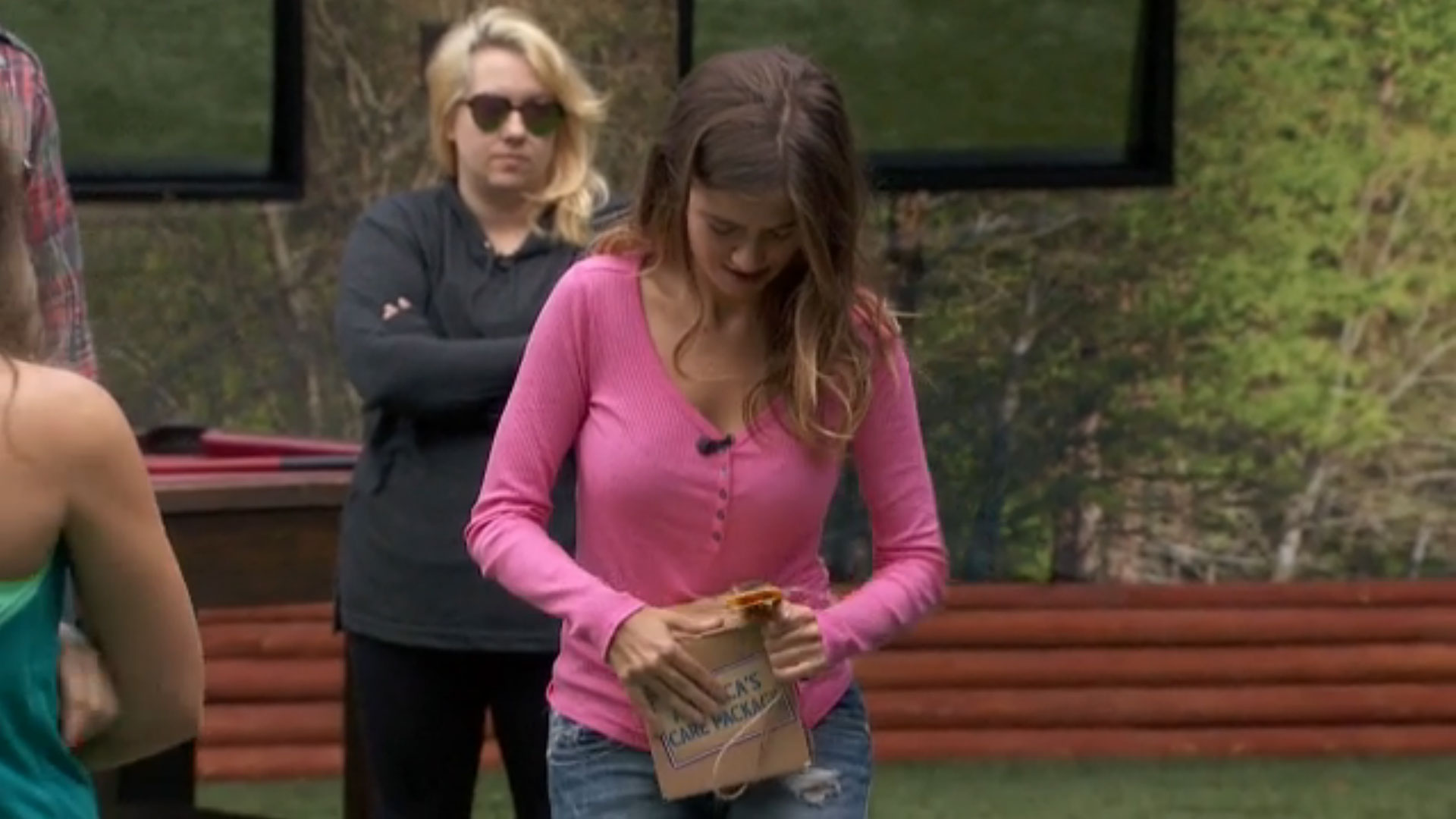 During Week 5 of Big Brother: Over the Top, America gifted Shelby with what might've been the biggest game-changer of the season, so far—the choice to eliminate three votes from the next live eviction ceremony.

After the 24-year-old law-school grad opened her Care Package and announced her advantage to the group, everyone's faces grew heavy and worrisome, especially those in the Late Night Jamboree.

At the latest live eviction ceremony, Shelby decided to eliminate Jason, Justin, and Kryssie's votes (Late Night Jamboree), leaving only Ball Smashers Alex, Whitney, and America to decide. Their three votes resulted in a unanimous decision to give Scott the boot from the BB:OTT house. 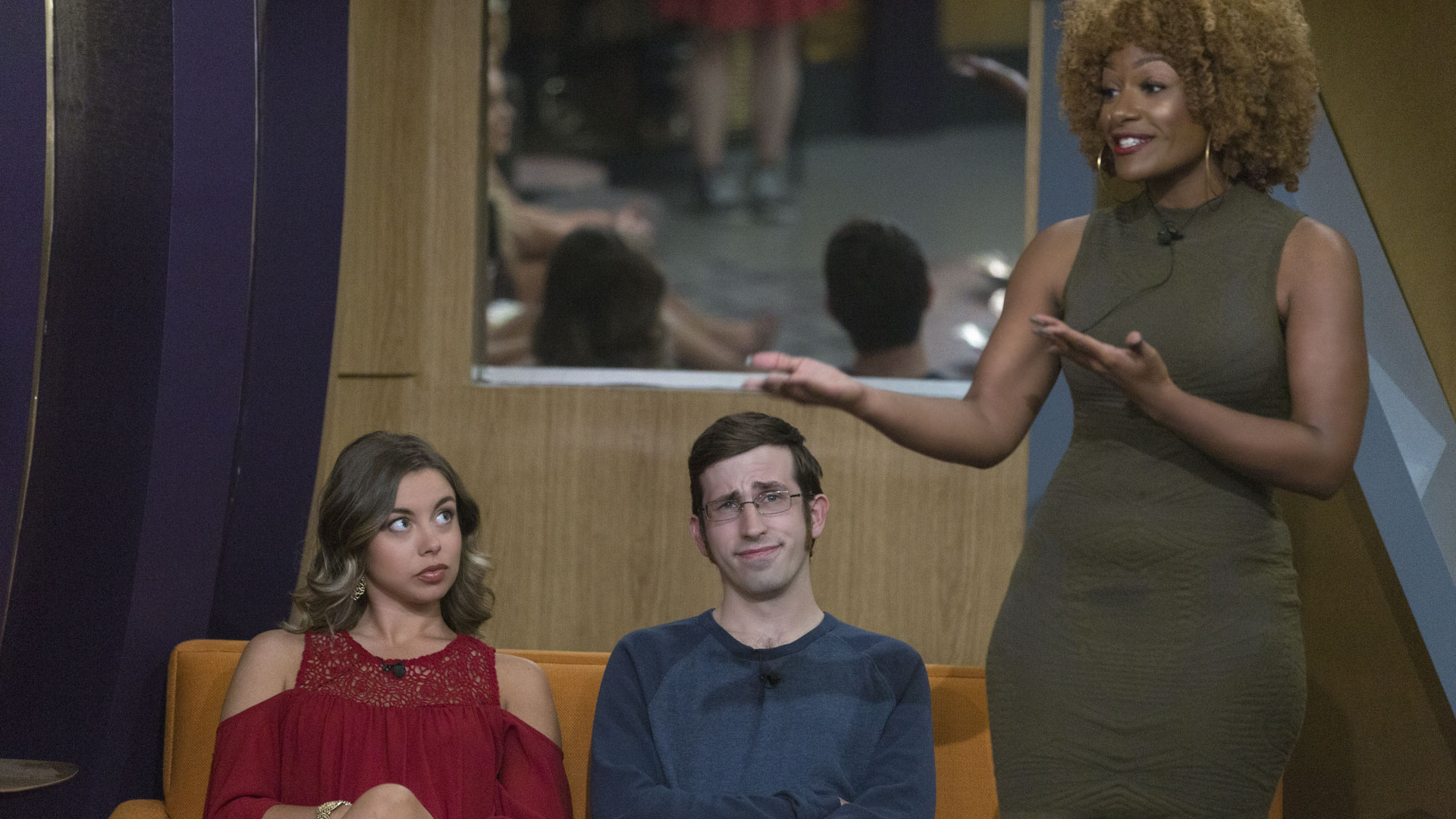 When America chose Neeley as their Week 4 nominee and, ultimately, she was sent packing.

During Kryssie's reign as HOH during Week 4, her closest ally in the house, Neeley, was nominated by America. And, though Scott was initially the main target for eviction, once America cast their vote, it looked more and more like the Texas sales associate might be sent packing, which inspired an extremely emotional live eviction speech.

Unfortunately for Neeley, her powerful plea wasn't enough to secure her safety that week and, with four votes against her, she became the fourth evicted HG of the season.

Not only did this particular eviction send shockwaves through the house because the Late Night Jamboree lost one of their own, but it didn't help ease the tension when Scott applauded Neeley's exit, which led to an all-out screaming match between him and Danielle. 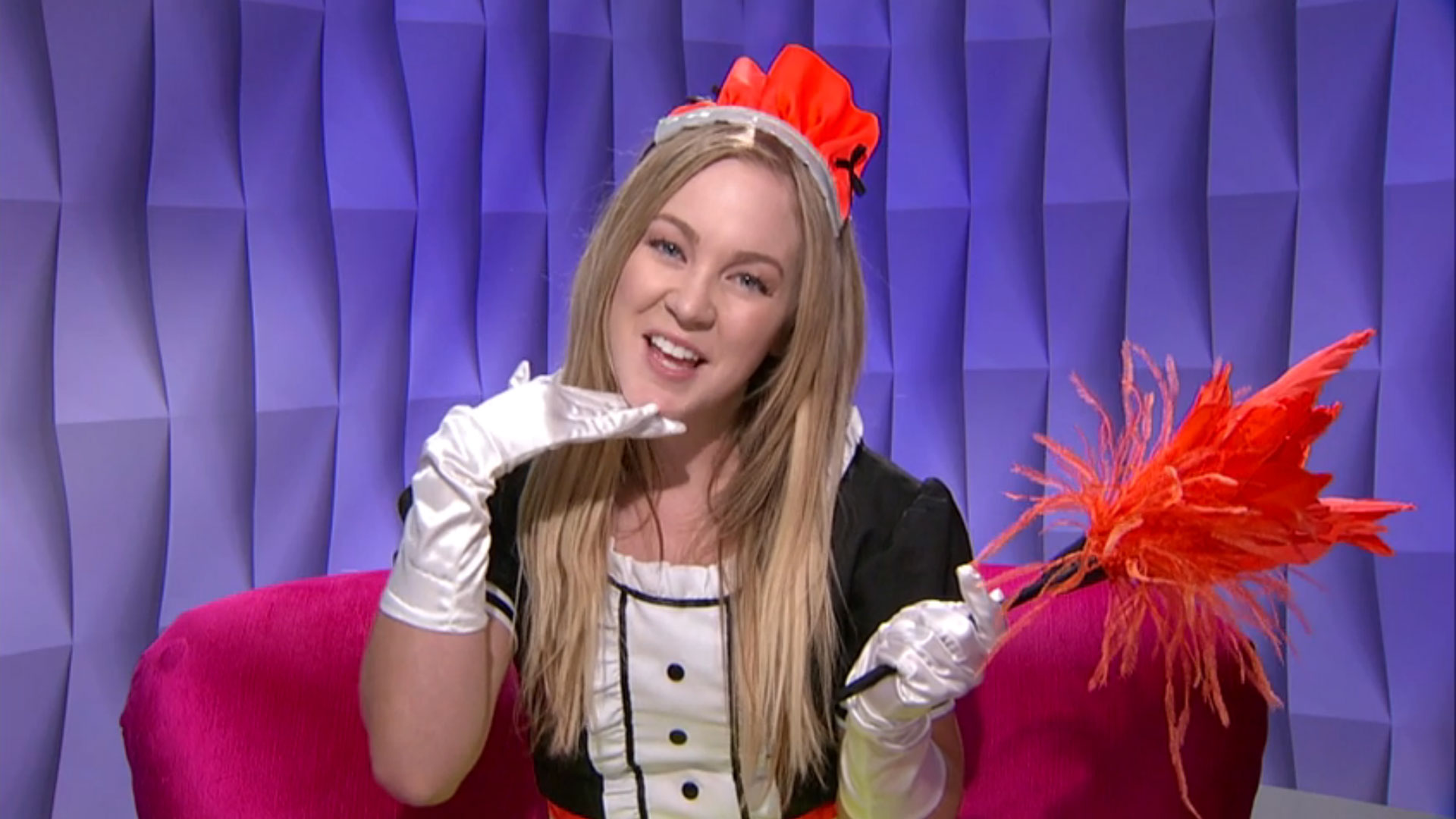 America's vote rocked the house again during Week 4 when Alex was given her "Safety Servant" Care Package.

Though the 25-year-old animation designer wasn't too thrilled to have to don the maid outfit and serve Kryssie's every need, she knew that by doing so, she'd safely float through another week in the game.

Plus, America's vote couldn't have come at a better time for Alex because, going into the week, she was definitely the Chicago rocker's No. 1 target. 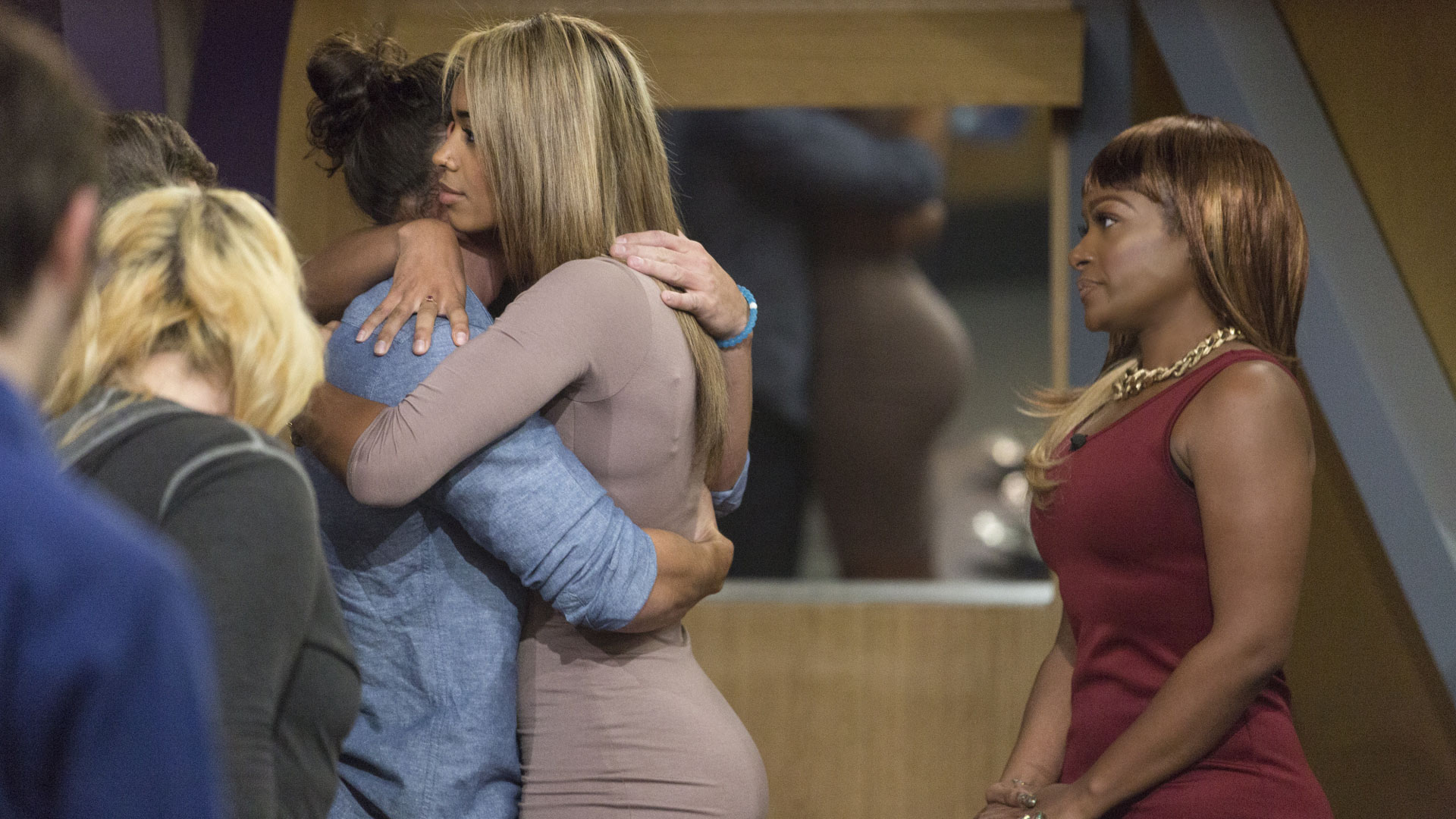 When America chose Danielle as their Week 3 nominee.

During Week 3, America chose Danielle as an eviction nominee and that was just the beginning of the drama in store for the BB:OTT Houseguests—and let's just say things didn't cool down when Scott, the reigning HOH, decided to put up Shane to join his Big Brother bae on the block, too.

As the days passed, the couple worried more and more that one of them would be going home, and they were right.

Each member of the affectionate showmance had four votes for eviction, which meant the power was thrown back to the HOH, whose tie-breaking decision led to Shane's sudden departure from the game. Many of Shane's allies thought the vote was an emotional move by Scott, but the HOH defended his reasoning with the disgruntled HGs, saying the North Carolina roofer was actually a huge threat to his game. 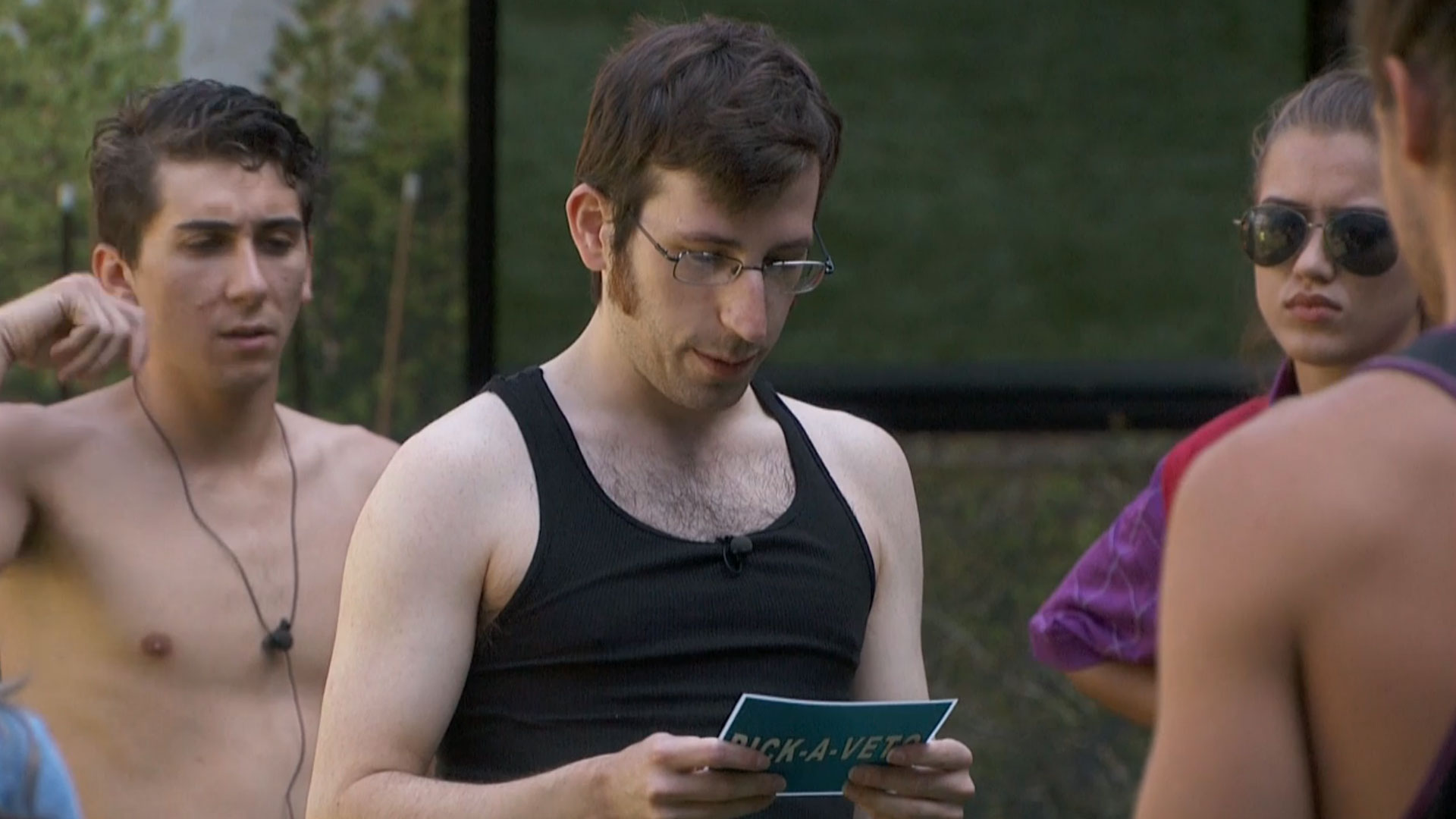 During Week 2, when Scott held the coveted Head of Household position, America also decided to gift him a special advantage in the game.

Not only did the 24-year-old debt collector have the power to pick two nominees that week—which ended up being Kryssie and Neeley—but the Care Package enabled him to choose what kind of POV leverage the participating Houseguests would play for.

After considering his options, the Maine native decided to pick the Double Veto, a comp that put two Veto medallions up for grabs, meaning two Houseguests would win POV holders and, in turn, each one could decide whether or not to play them.

Justin and Alex ended up winning the competition; Alex opted not to use her POV, but Justin used his POV to pull Kryssie down, which meant Scott had just minutes to choose another HG to go up on the block—Shane. 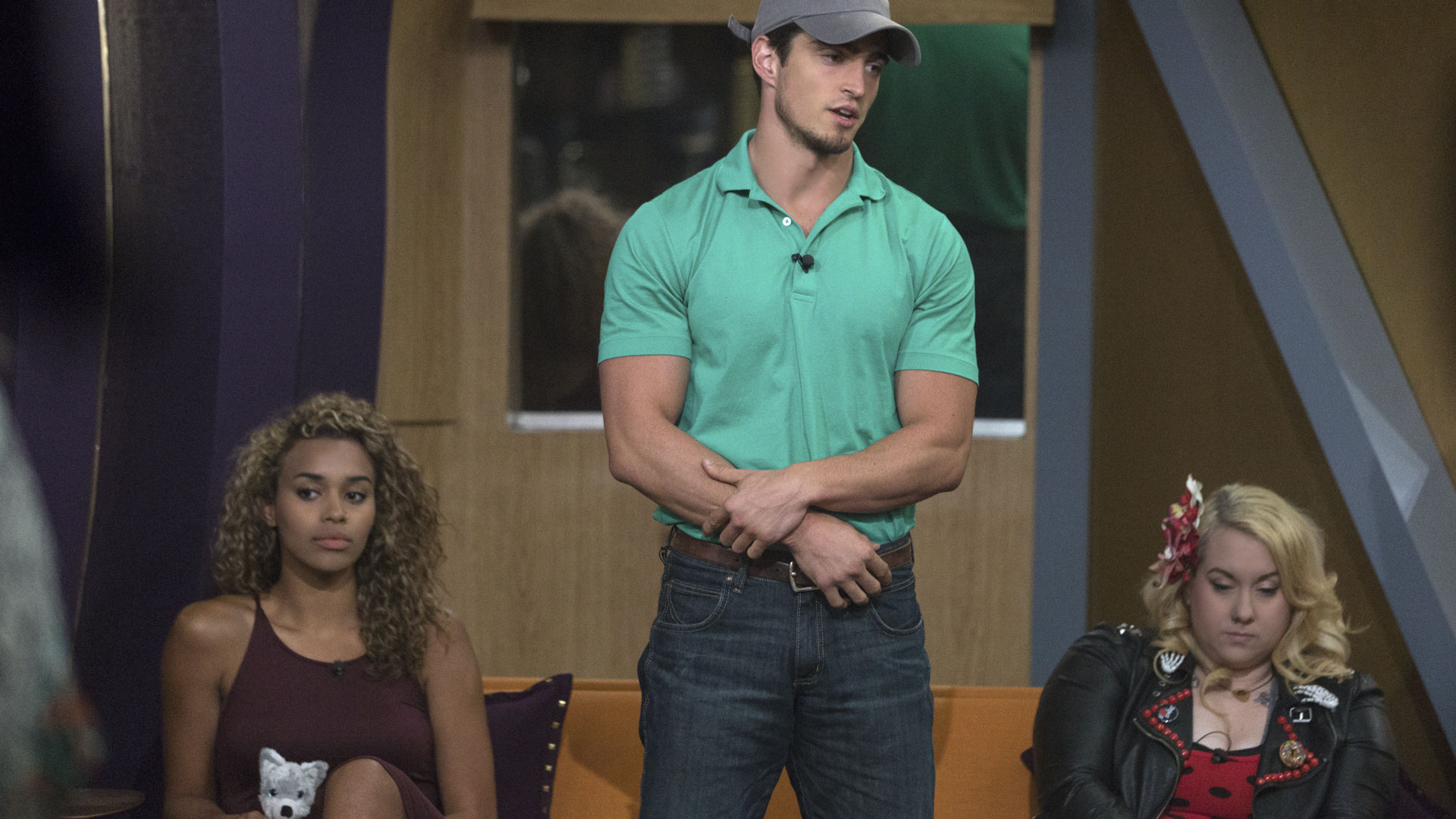 Before the Houseguests competed in Week 3's "Veto For Sale" POV comp, Monte learned he was America's nominee, which left him with a lot to think about on the block.

Monte tried to scramble for safety, but when it came time to vote, he was the one sent packing from the BB:OTT house. 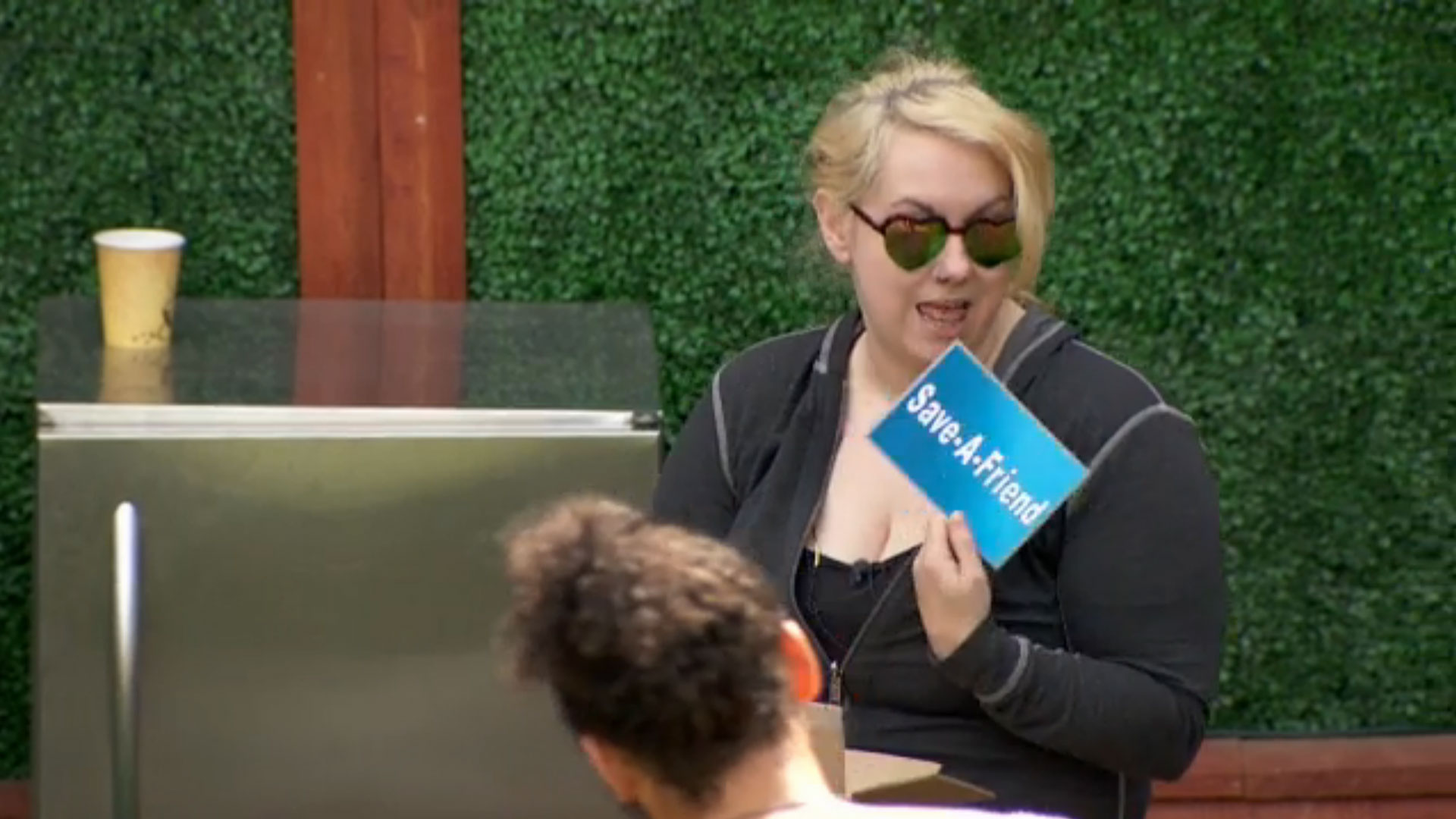 The second week of BB:OTT brought with it a special gift for one lucky Houseguest—America's first Care Package.

As the winner, Kryssie received the chance to save one person in the house from being eliminated that week; the catch, however, was that she couldn't use the power on herself, so she was still eligible for eviction.

The Chicago rocker took time to marinate on the idea of saving someone, knowing her decision could deeply impact her game moving forward. In the end, she chose to keep Jason, her friend and fellow Late Night Jamboree ally, safe because he had been the target in Week 1. 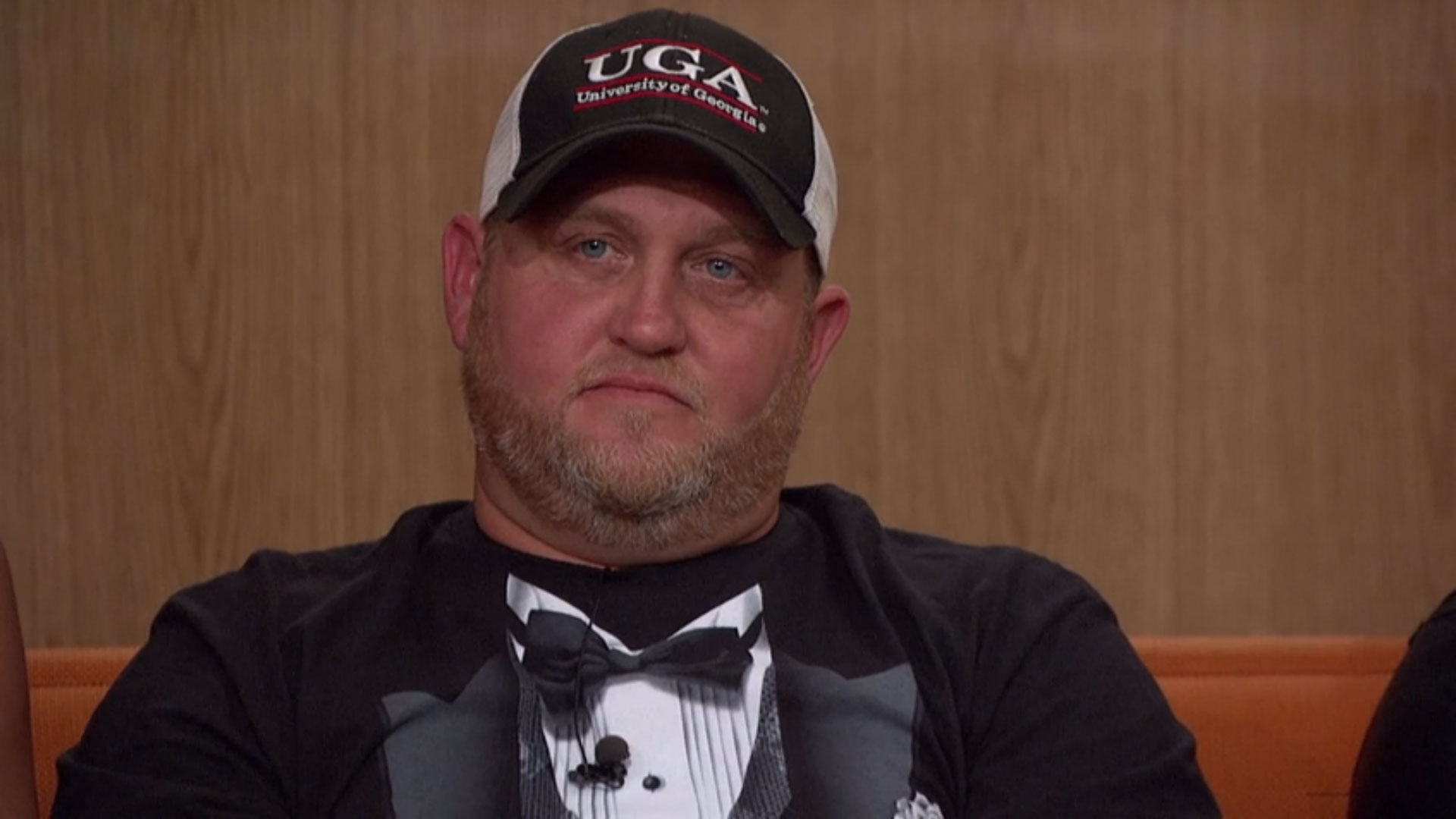 During the season's first live eviction ceremony, host Julie Chen informed the Houseguests that America would have a ton of power throughout BB:OTT, including a third HG who would be put up on the block each week.

Cornbread, a 41-year-old foreman from Georgia, couldn't hide his surprise as he took a seat next to Alex and Danielle, and was announced as America's nominee. Then, once the votes were eventually revealed, Cornbread was officially voted out as the first Houseguest evicted from Big Brother: Over the Top. 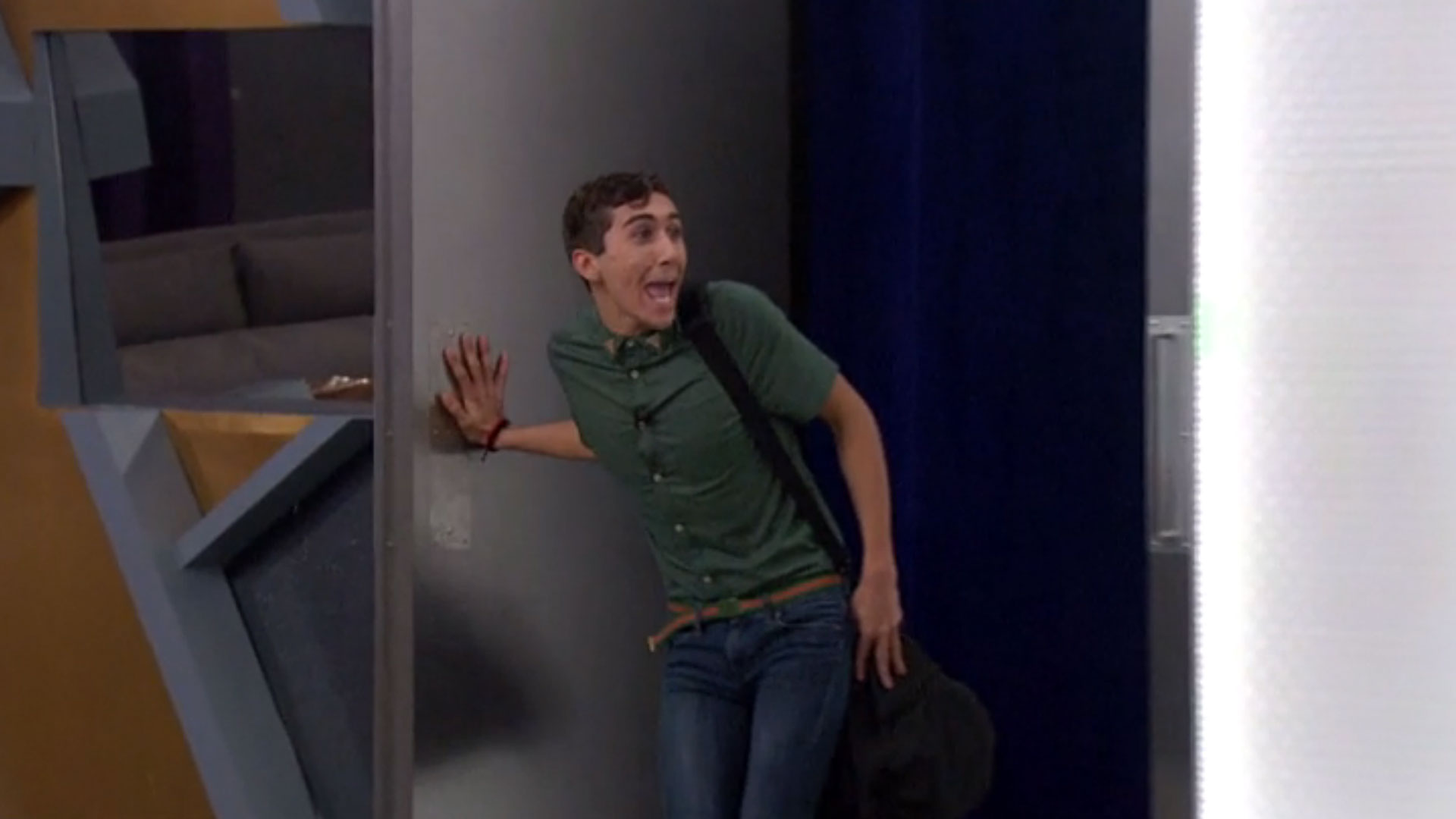 When America chose Jason from Big Brother Season 17 to compete in BB:OTT.

Before the premiere of BB:OTT, America was given the unique opportunity to vote who they wanted to be the game's 13th Houseguest—and, what made it even better was that the vote was between two Big Brother returnees, Jozea (Season 18) and Jason (Season 17).

When the final doorbell rang, America didn't know what to expect, but once we heard Jason's voice, we knew Big Brother: Over the Top was definitely going to live up to its name!