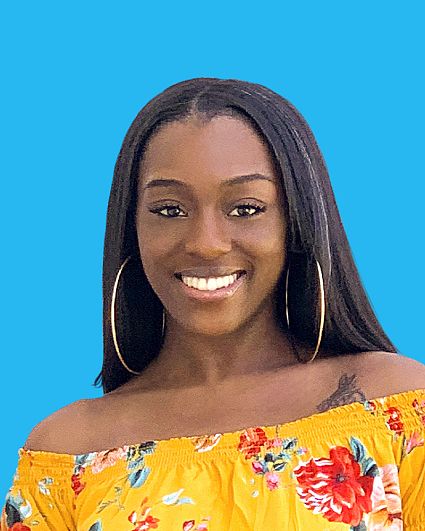 Three adjectives that describe you: Witty, outspoken, hilarious, and strong.

Favorite activities: I love doing things with my daughter. She's literally my best friend, the
coolest human in the world, and she's hilarious too. We do a lot of arts and crafts, science
experiments, board games, puzzles, painting, cooking, baking… she keeps me young. I
THOROUGHLY enjoy reading! Give me a good book, some rain, a fireplace, and some tea,
WHEW, I'm good to go. Outside of that, I honestly think it just depends on my mood. I enjoy
things as extreme as amusement parks, hiking, The Spartan Races, or as chill as shooting pool,
bowling, and a nice little comedy club.

Why do you want to play Big Brother again?
I genuinely LOVE this game. It's hard as hell and it will drive you crazy, but it's so much fun to
play. I've played Big Brother twice now, and I've lost Big Brother twice, but third time's the
charm, right? When I was evicted during Season 18, I told Julie that I'd play this game again
and again and again, and I meant that. With two seasons and no comp wins, my ego and my pride are
annoyed as hell right now, how did I go in there TWO TIMES and didn't win anything? I have
some things that I need to prove to myself. I'm fully aware of what my biggest errors were
during my first two seasons, so I know exactly what NOT to do this time around.

What do you think will be the most difficult part about living inside the Big Brother house?
We are in the middle of a pandemic, so of course it's going to be hard being away from my child
and my family. However, my family is like Master Level Quarantine Squad. I have peace in
knowing that my mom is protecting my daughter and God is protecting them all. Like every
other season, the hardest part for me is not being able to be around my daughter because we're
super attached to one another. She can't sneeze without me knowing about it, that's how
attached we are. Not being able to see her, hug her, kiss her, and pray with her is going to be
hard, especially now that she's older. She's five now, so she's fully aware of what is going on,
which makes it a lot harder this time

Which past Big Brother cast member did you like most and why?
It's definitely no secret that my favorite Big Brother players are Danielle Reyes and Dan
Gheesling. I will say it forever and always that Danielle was robbed of her win during Season 3.
She played the hell out of that season and if diary room sessions were private like they are now,
she would have definitely won her season. Dan's creativity when playing this game is
unmatched. I can honestly say that he takes all aspects of the game into consideration when
playing. His first season (Season 10), he played flawlessly. As much as I love both of them, I
would never want to play the game with them. I already know I would be blindly loyal to them
both, and ain't nobody got time for that, that's not how you win.

What is your strategy for winning the game?
You know what, I don't have a strategy this time. Both times I went into the house, I had these
strategies that I thought were going to work and then as soon as Julie hit us with the "but first..."
everything went out the window. So this time, I'm going to play as I go. One of my favorite
things to do with my students is improv, and there is a game called "Yes, and," which basically
means "yes, I receive what you're giving me and this is how I'm going to respond." That's
exactly how I have to play this game, I have to literally live in the moment of what's going on in
the house… and keep my damn mouth shut!

How does this strategy differ from the last time you played?
The last two times I played this game, I went into the house and was on game mode level 9,000.
Each time I failed, lol. So this time I plan to be more chill and relaxed. My antennas will still be
up, but I don't want to cloud my judgement this time by filling my mind with things I shouldn't
even be focused on. Play by play… step by step, and LIVE IN THE MOMENT.

Have you changed/evolved since the last time you were on the show?
My life has changed a lot since the last time I was on the show. I've grown so much as a person.
High-tempered, hot-headed Da'Vonne has calmed down a lot. Don't get me wrong, she's still
very accessible, but I try to keep her tucked away these days. I've done more TV shows and
branched out more with my acting. Life has really been great, I can honestly say the Lord has
blessed me.

My life's motto is…
Definitely one I took from my granny. She used to always say: "Say what you mean and mean
what you say. Be honest, direct, and stand in your truth because people can only do two things:
accept it, or reject it. At the end of the day, who gon' whoop my ass?"

Fun facts about yourself:
-I am an extremely sociable person but I can't be social for long periods of time. I ENJOY MY
ALONE TIME. I am the person that can go to an event, make my rounds, have an amazing time,
but there is definitely an alarm set on my phone that is going to set off my "alright y'all, it's been
real..." speech, so that I can make my exit.
-I do not like to watch myself on TV. I have not sat down and watched all of my episodes of BB
17 or 18, because I don't like watching myself. I don't know what it is, I'll start and then never
follow through with it.
-As tough as I am, I am terrified of insects and reptiles. The Season 21 competition with the
snakes and roaches… HELL NAH!
-I'm extremely shy which is weird because I'm also extremely sociable. For example, if I enter a
room with a lot of people, yes, I'm going to talk and engage, but for those first three or four
minutes, my palms are sweating and my heart is racing a million beats a minute. As soon as I get
past that four or five minute mark, I'm gold. The beauty about it is, I've learned how to mask it,
so until now, I'm sure no one really knew.