What started off as a simple squeeze between two Houseguests quickly turned into an awkward embrace.
If you're a Feeder, then you may've have already seen some flirty moments between Zakiyah and Paulie. However, there's been one somewhat intimate interaction between the two hot Houseguests that raised eyebrows—but not for the reasons you'd expect.

In this PG-rated clip, watch what happened when Zakiyah and Paulie participated in what felt like one of the longest single hugs in recent Big Brother history.

Plus, as if this moment wasn't weird enough, the pair clung together in front of an audience; while cradling each other for nearly 90 seconds, James sat at the kitchen table as a solo spectator. 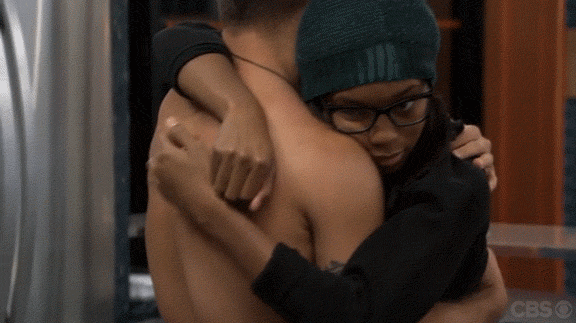 Can you spell "awkward?"

Craving more exclusive moments from the Season 18 house? Head over to the Big Brother Live Feeds now for 24/7 access of all the action.

Plus, don't forget to watch Big Brother on Wednesdays and Sundays at 8/7c, and Thursdays at 9/8c on CBS and CBS All Access.