Paulie's Tears Dry On Their Own Before Eviction: Big Brother Season 18, Episode 27 Recap

The Jersey boy's failed attempt to tug on the Houseguests' heartstrings scored him a one-way ticket out the door.
On the latest episode of Big Brother, Paulie's attempt to garner sympathy votes fell flat, "Brenchel" introduced their darling daughter, the group of recently evicted female Houseguests bonded in the BB18 jury house, and the remaining HGs learned who held the now-expired round-trip ticket.

While we think about how potentially awkward it'll be when Paulie's reunites with Zakiyah in the jury house, let's jog through some of the biggest moments from the latest episode.

As the eviction ceremony loomed, Paulie finally realized that his time in the house was likely limited. Overcome with emotions, the Jersey DJ sat in the backyard with James to clear his head, but his relaxation plans were thwarted when a butterfly unexpectedly crossed his path. 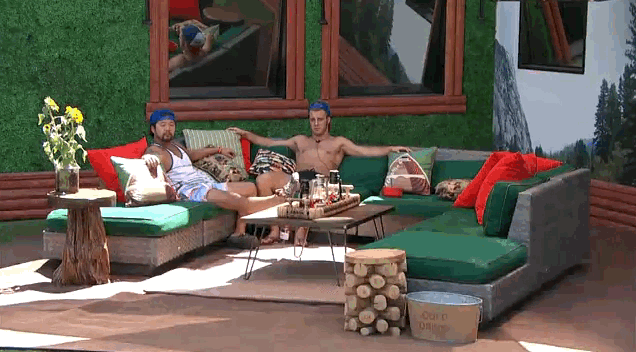 Paulie hoped these strategic emotional breakdowns would appeal to the empathetic side of the remaining Houseguests and, best-case scenario, they'd feel bad enough to toss him a sympathy vote... or three.

But, not everyone was on board with his strategy. 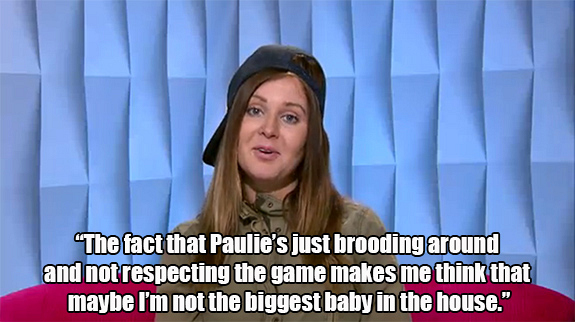 Of course, not everyone was as harsh as Big Meech.

Corey, for one, couldn't stand to see his best bro so down in the dumps and encouraged Paulie to put the apron on, get in the kitchen, and bake his handsome heart out. 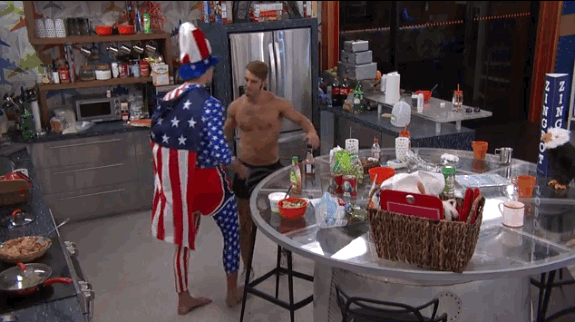 While the guys hugged out their feelings, fans got an inside look into the real lives of BB12's hottest showmance, Brenchel (Brendon Villegas and BB13 winner, Rachel Reilly), who recently became parents to a precious baby girl, Adora.

The fan-favorite couple talked diaper changes, showmances, and who they think could take it all.

But, the new parents weren't the only Big Brother alumni who shared their thoughts on the game.

For the first time this season, the jury house opened its doors so fans could check in with Da'Vonne, Zakiyah, and Bridgette, who filled each other in on their final hours in the BB18 house.

Back in the BB18 house, it was finally time for the Live Eviction, where the Houseguests unanimously voted to send Paulie packing—and, after a week of weeping, the competition beast exited the house with his head held high.

Once he took a seat next to Julie Chen, the elder Calafiore brother turned on the charm for a candid conversation about his game strategy, being betrayed by Paul and James, and whether he'd pursue a relationship with Z-Baby outside of the house. 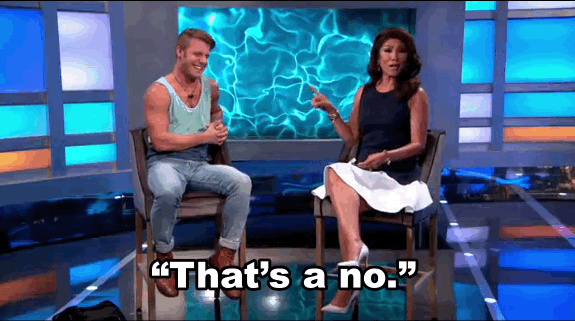 With the mystery card in hand, Julie revealed that Paulie didn't win the roundtrip ticket, which was no longer in play and meant the coveted card belonged to someone still in the game. But who?

That'd be Paul, who, not only discovered the secret room, but also picked the winning ticket on the first pick. Your boy knows how to book a trip!

Will Paul's lucky streak continue during the next HOH competition, and, if so, who will he set as his next target?

Watch Big Brother on Sundays and Wednesdays at 8/7c, and Thursdays at 9/8c—plus, a special bonus episode on Friday, Aug. 19 at 8/7c—on CBS, and stream full episodes on CBS All Access.