While we wish someone would cut us a slice of that pie, let's take a brisk walk through some of the greatest moments from the latest episode.

After a full week of eating apple pies and plotting to send Paulie packing, everyone was in need of a little carefree fun—and what better way to let loose than to frolic at a fair?

The backyard was transformed into a carnival-themed compound, complete with games, treats, and live music from legendary crooner Ziggy Marley.

Without the pressure of talking strategy, the HGs seemed ready to exhale, enjoy each other's company, and toast to some of the summer's most memorable (and sometimes dramatic) times.

They touched on Jozea's ego, cringed as they remembered the drama between Tiffany, Frank, and Da'Vonne, and giggled as they recalled Paulie's epic lapdance at Zakiyah's birthday party

But, they didn't just focus on the ghosts of Big Brother past. The HGs also dished on the summer showmances, sharing their favorite moments between Natalie and James, Nicole and Corey, and Zakiyah and Paulie. 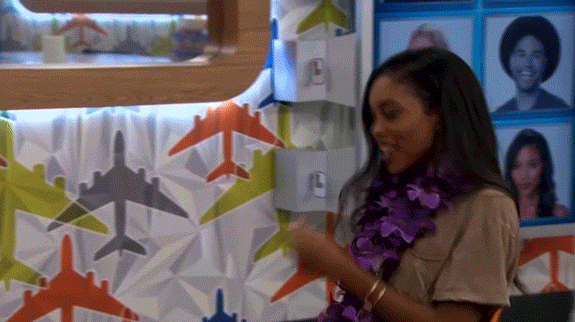 Once their hearts stopped fluttering, the HGs geared up for a series of messy games, which included a dart board, a dunk tank, and a welcomed appearance by Big Brother legend Jessie Godderz (aka Mr. PEC-Tacular).

Each game offered a range of prizes, including a tech gadgets, cold-hard cash, and a special advantage for the upcoming HOH competition.

Alas, the cotton candy-induced sugar-high had to wear off at some point.

Once fully stuffed with churros and popcorn, the Houseguests put their game faces back on and it wasn't long until they were beckoned back to the backyard where they discovered a daunting object which contained "The Black Box" HOH comp.

As the outgoing HOH, Victor explained to the participating HGs their mission: each player would have to make his or her way into the spooky pitch black box, where they'd be expected to hold onto their buttons while weathering rancid smells and gloppy goop until instructed to search for, find, and place a disc on a pole by their stations.

The first person to stack 10 discs in two hours would become the newest Head of Household.

Who will survive the chilling challenge and ensure their safety for one more week?

Watch Big Brother on Sundays and Wednesdays at 8/7c, and Thursdays at 9/8c on CBS, and stream full episodes on CBS All Access.