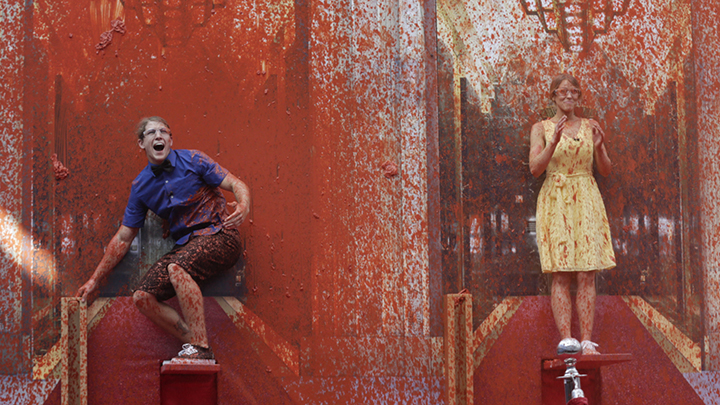 During Big Brother's premiere episode, the Houseguests competed in a HoH competition called "Flying Tomatos" that left them covered in red remnants.

Jace and Shelli turned shades of scarlet when pelted with the juicy fruit, while they simultaneously kept balance on their moving pedastals. Talk about multitasking!

Audrey was able to keep a cool expression as she was covered in tomato slosh. Looks like there was enough juice here to concoct one killer Bloody Mary as a way to celebrate the summer adventures ahead! 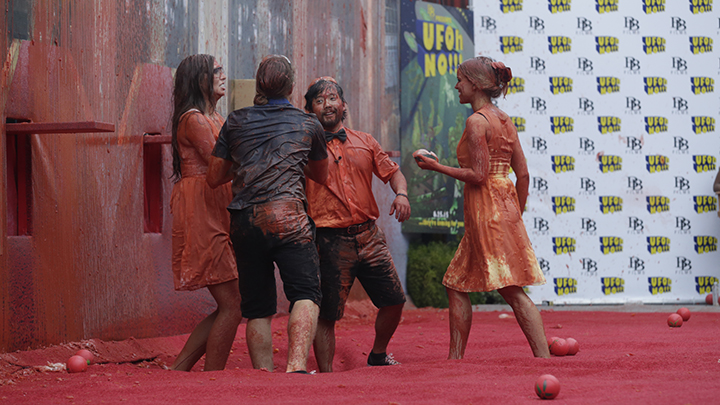 Everyone goes in for a messy, congratulatory hug ("Flying Tomatoes," HoH)

Jace, Shelli, and Audrey congratulated James as the season's first HoH with sloppy and sticky embraces. 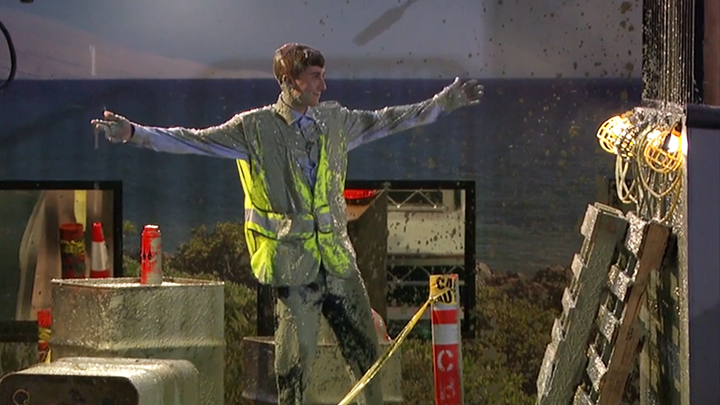 In Episode 3, Jason was dethroned as HoH and left looking like a muddy construction worker after the "DuBob" competition. 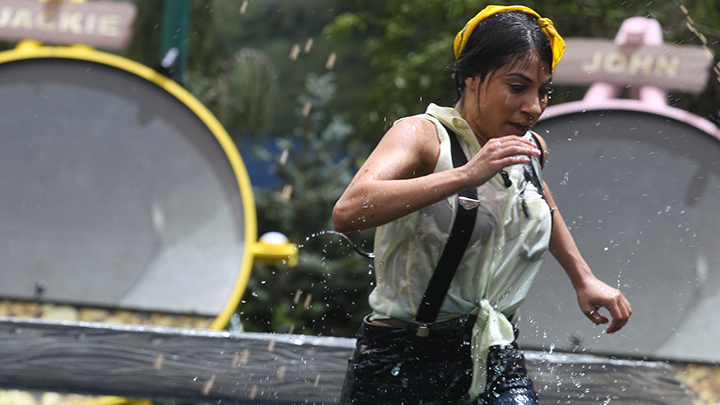 Jackie gives it all she's got ("Nose-a-Scotia," POV)

During Episode 4's POV competition, Jackie made a run for it so she could try and spell the word with the highest point value. 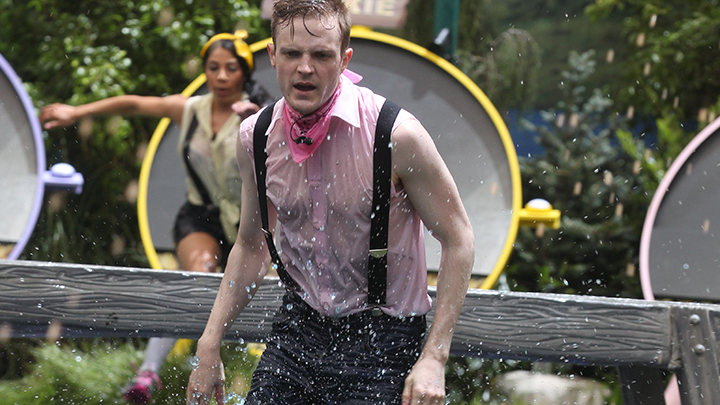 Johnny Mac had a wet and wild time ("Nose-a-Scotia," POV)

Looks like this dentist "nose" what to do as he pushed through all the dirt, water, and filth of the comp, and focused on that gold medallion. 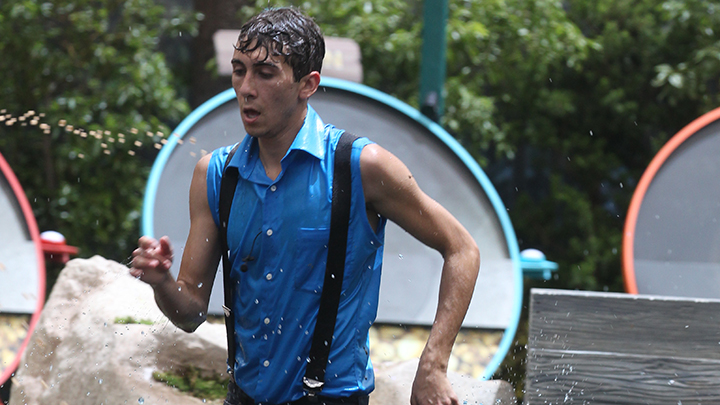 Jason tackles the mess before him ("Nose-a-Scotia," POV)

The Boston grocery bagger didn't hold back when he navigated through the gross, mucky terrain to try and retrieve as many golden nuggets as possible. 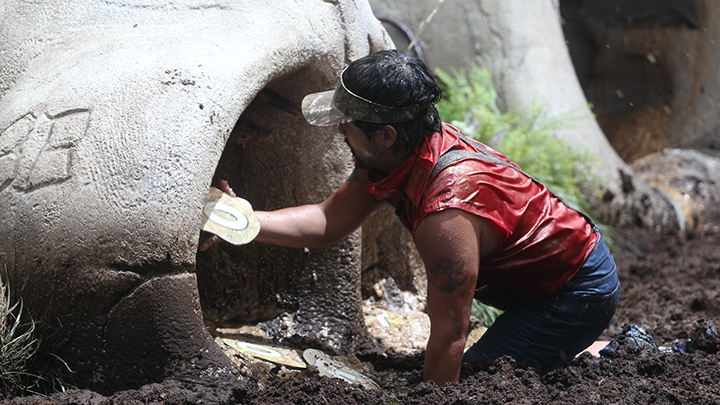 James is "snot" having a good time ("Nose-a-Scotia," POV)

We were a little squeamish when this Houseguest peeled away globs of goop in order to get closer to the final prize. 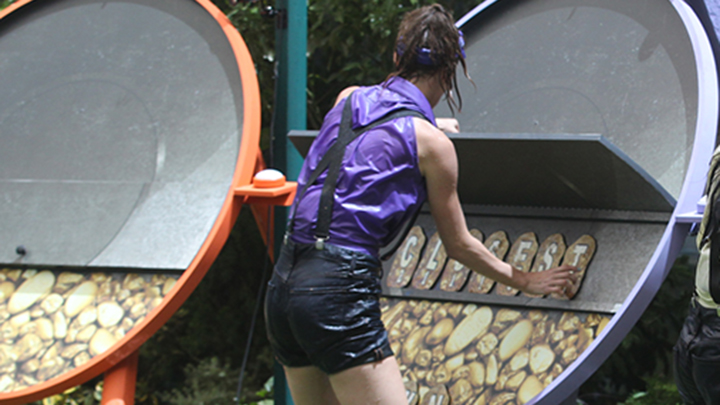 After Becky picked out her letters out, she sploshed her way over to the spelling board to share her word. 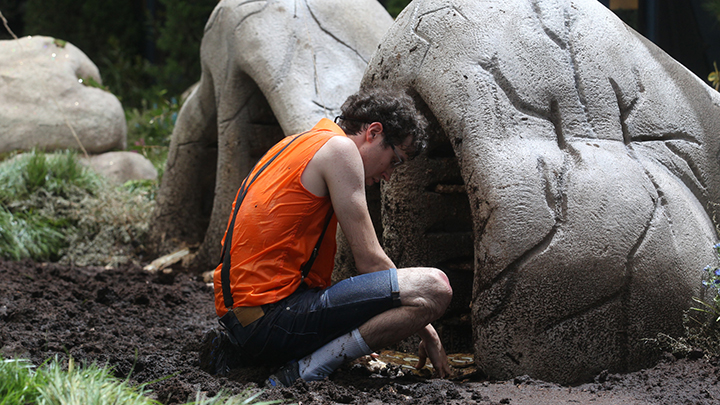 Steve might've been stuck in a sticky situation with this nostril, yet he was able to pull out a win by spelling "trombonist." 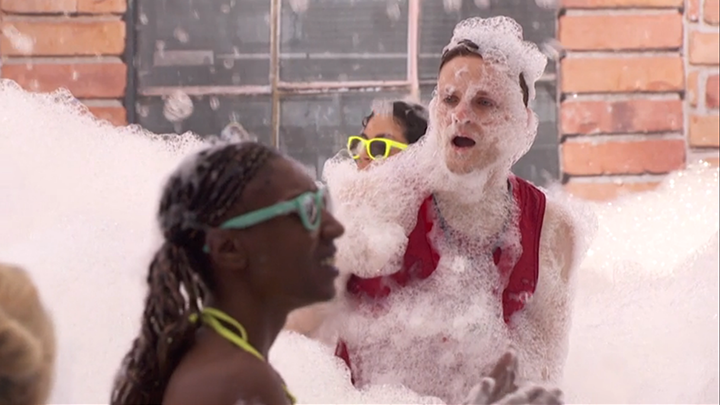 Johnny Mac was covered in sticky foam as he navigated his way through a maze of party people in "Gronk's Amazing Foam Party" challenge. 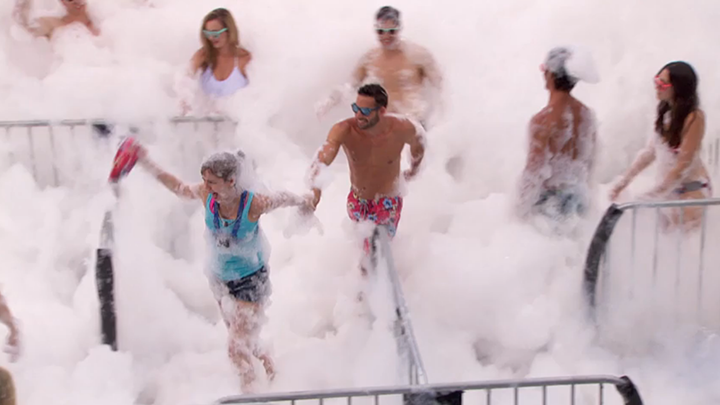 Meg kept it clean while she pushed through the blinding bubbles to bring her party goer to the designated VIP area. 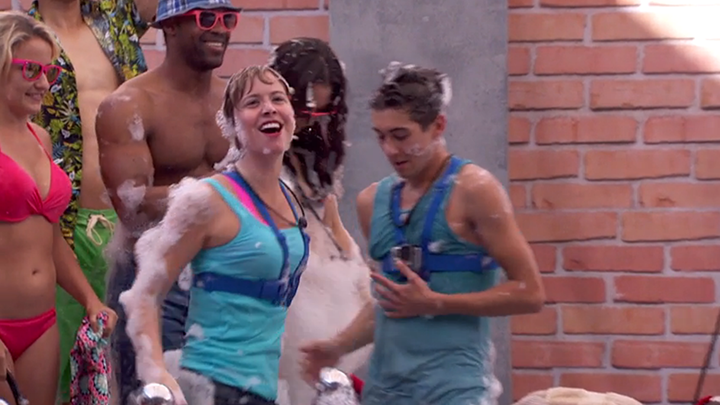 No mess is too big for these two ("Gronk's Amazing Foam Party," BoB)

Teammates Meg and Jason didn't let the bubbles get in the way of their 10-person VIP area. Their victory meant they were taken off the block and Vanessa remained HoH for the week. 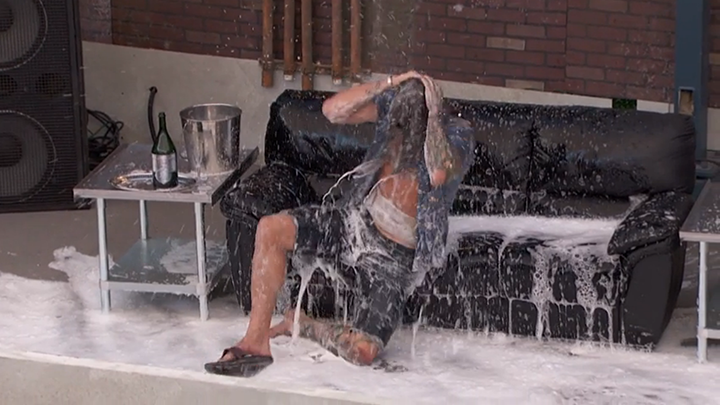 Shelli, host of the competition, broke the news that Austin had been dethroned before things got real sudsy. 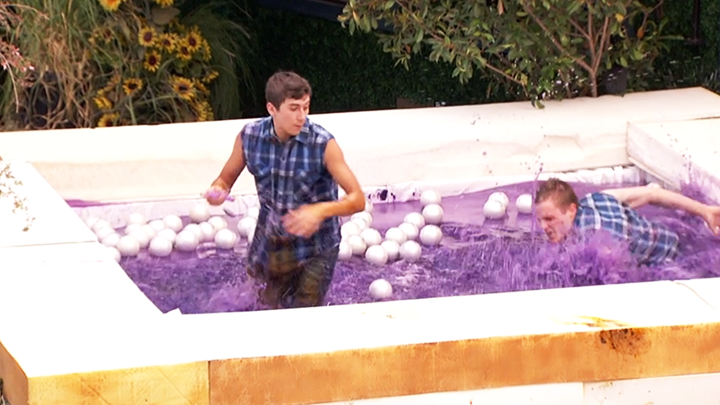 Wrestling for pearls in the jam ("Grunge BoB," BoB)

In the "Pearl Jam" area of this '90s-themed BoB competition, Jason and Johnny Mac wrestled the murky, purple water for a lucky key. 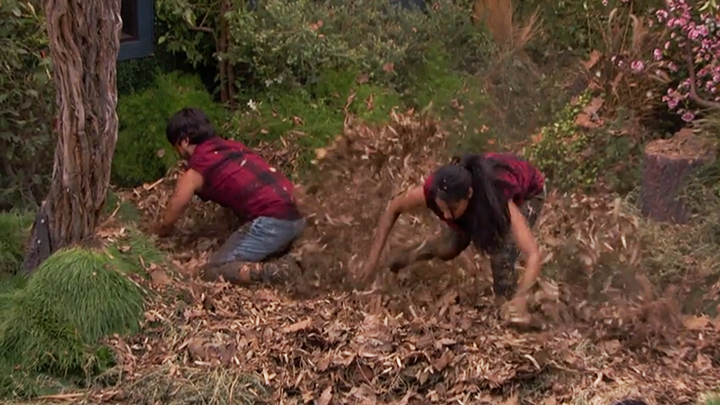 This pair got their hands dirty in the "Screaming Trees" area of the battle, searching through piles of mulch for a key to unlock Alice's chains.

Jason and Johnny Mac unlocked Alice and carried her through the trenches that led to nirvana. 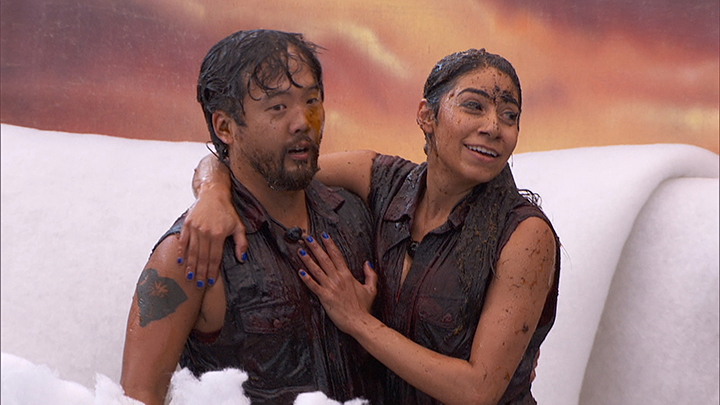 A messy win for the victorious duo ("Grunge BoB," BoB)

Jackie and James fought their way to the front and proved that grunge is still in. 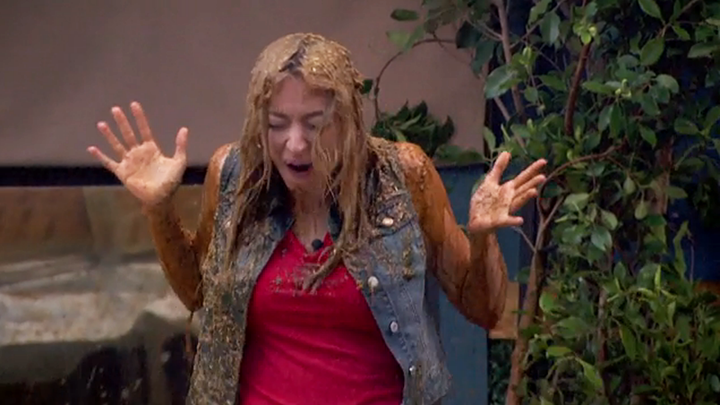 Liz gets drenched in all that slime ​("Grunge BoB," BoB)

Do you think Liz smelled like teen spirit after being dethroned as HoH? 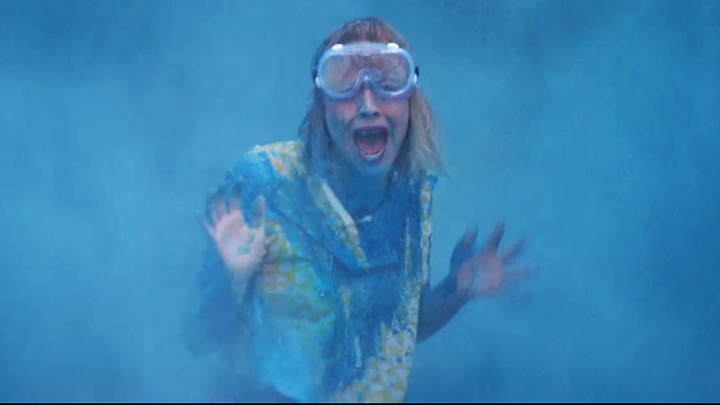 Meg let out a screech and turned blue after her chemicals exploded with a loud bang in this science-themed challenge. 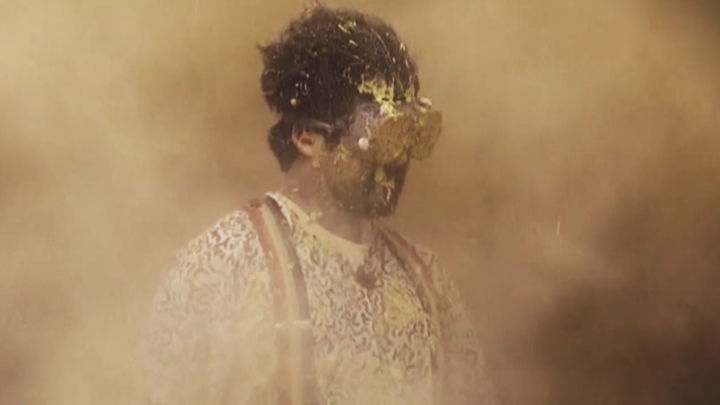 James gets blown away ​("BB Side High," POV)

After mixing together the wrong set of chemicals, the Veto competition blows up in James' face and leaves him covered in filth. 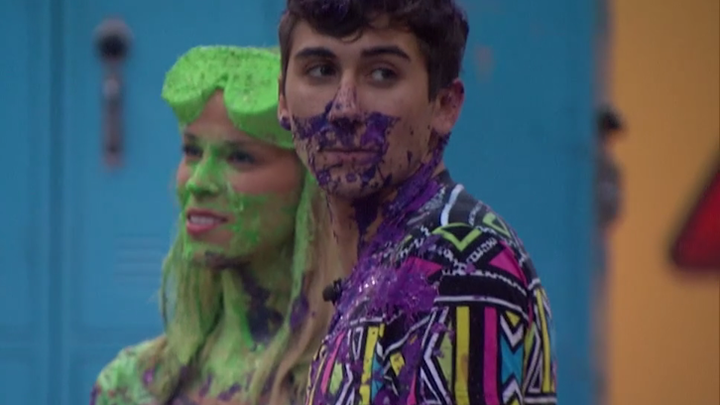 Shelli and Jason aren't afraid of a little color ​("BB Side High," POV)

These Veto competitors look good in neon after their flasks exploded right before their eyes. 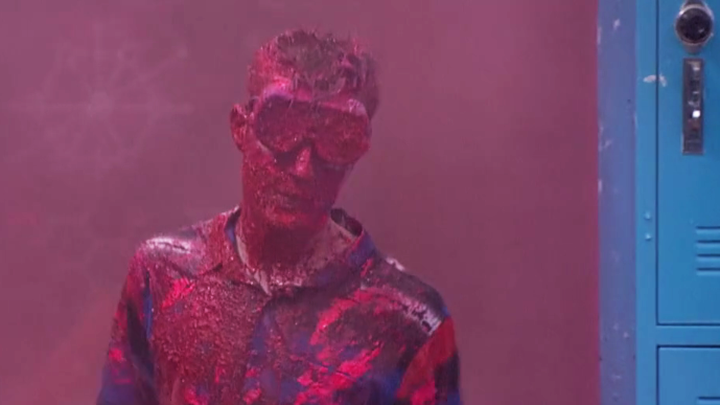 It's a paint attack for Johnny Mac ​("BB Side High," POV)

After giving his flask a good sniff, Johnny Mac's concoction erupts right before him, leaving his body covered in ruby red goo. 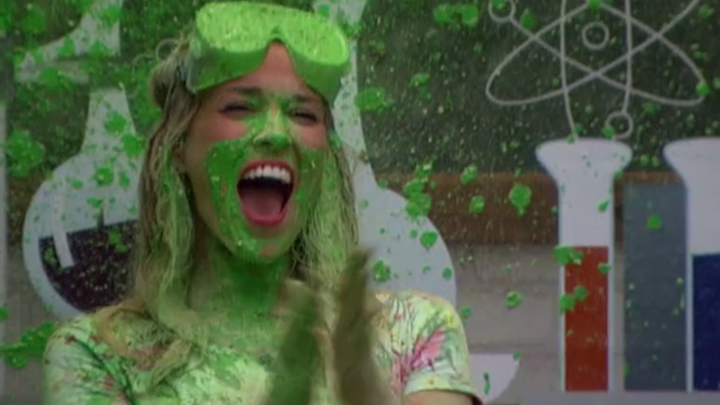 Shelli may be covered in green goop, but that didn't stop her from cheering on POV winner Vanessa from the side lines. 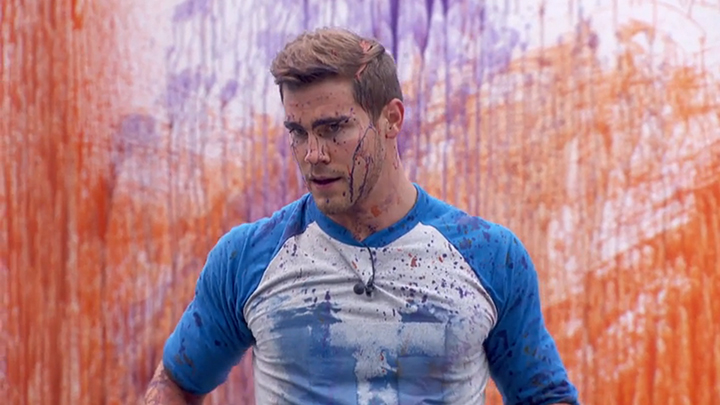 While competing alongside Becky in this BoB competition, Clay walked away—splattered head-to-toe in paint—with a loss.

Drenched in orange paint, Becky heads to the board and tries to solve the puzzle before James and Liz. 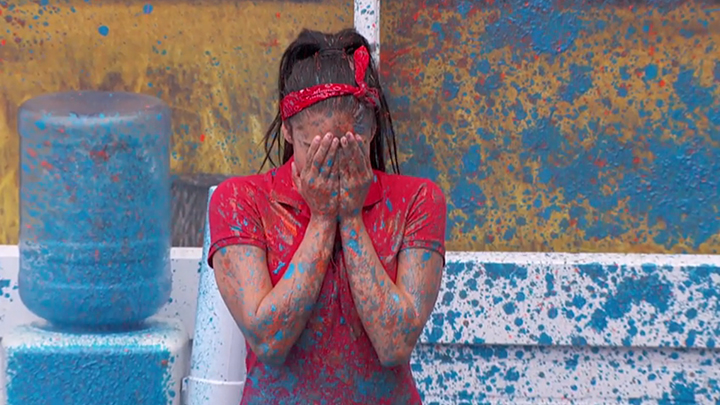 Jackie waves goodbye to her HoH title as she's hit with a crushing wave of paint at the end of the challenge.