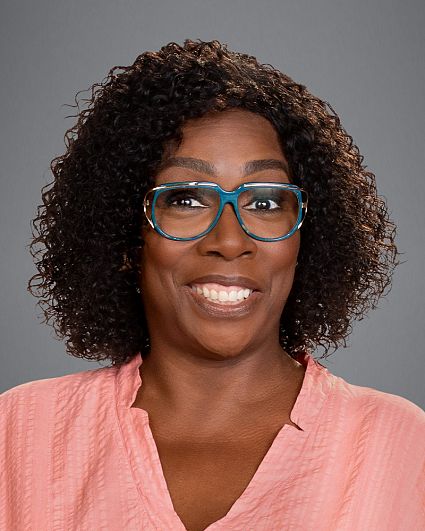 Kemi
Gina Yashere
Biography
Comedian Gina Yashere was born and raised in Bethnal Green, London to Nigerian parents. Prior to becoming a comedian, she worked as an elevator engineer for Otis.

In 1996 Yashere became a finalist in the Hackney Empire New Act of the Year, a British competition devoted to discovering and promoting new stand up comedians and variety talent. In 2000 she began creating and performing popular comedic characters on the series The Lenny Henry Show, and in 2006 and 2007 she co-hosted the MOBO (Music of Black Origin) Awards in the U.K.

Yashere broke onto the American comedy scene as one of 10 finalists on Last Comic Standing in 2007. She went on to be named one of the Top 10 Rising Talents in The Hollywood Reporter. In 2008 she became the first and only British comic to perform on Def Comedy Jam. In 2009 she performed a stand up comedy routine on The Tonight Show with Conan O'Brien and appeared on the BBC's Live at the Apollo. Starting in 2010, she appeared regularly on The Tonight Show with Jay Leno in a sketch comedy series called "Madame Yashere: The Surly Psychic," in which she gave fake psychic readings to unsuspecting people on the street. Also, she appeared as Flo in several episodes of the ITV drama Married Single Other. In 2010 her one-hour comedy special, Skinny B*tch, premiered on Showtime. In 2015 she was featured on Gotham Comedy Live and in 2016 appeared on Showtime's The Nasty Show with Artie Lange. She produced and starred in the comedy specials Gina Yashere: Laughing to America and Gina Yashere: Ticking Boxes, and performed on season two of the Netflix comedy showcase The Standups. In 2017 Yashere became the British correspondent for The Daily Show with Trevor Noah. As an in-demand voice artist, Yashere voiced the character of Keisha in the British cult hit Bromwell High and was the voice of Gravelle in the movie Early Man from the creators of Wallace and Gromit and "Chicken Run.

In addition to performing for audiences in Europe, the United States, and Australia, Yashere is a highly sought-after comedian in Asia, selling out shows in Singapore, Cambodia, Vietnam, Malaysia, and Hong Kong. The UK's Black Entertainment and Comedy Awards named her "Best Comedian" four years in a row, and she has performed several times at the prestigious Just for Laughs Comedy Festival in Montreal and Toronto.

Born in London, Yashere currently resides in Los Angeles. Her birthday is April 6. Her web site is www.ginayashere.com, and she can be followed on Instagram and Twitter @ginayashere and on Facebook @ginaisfunny.