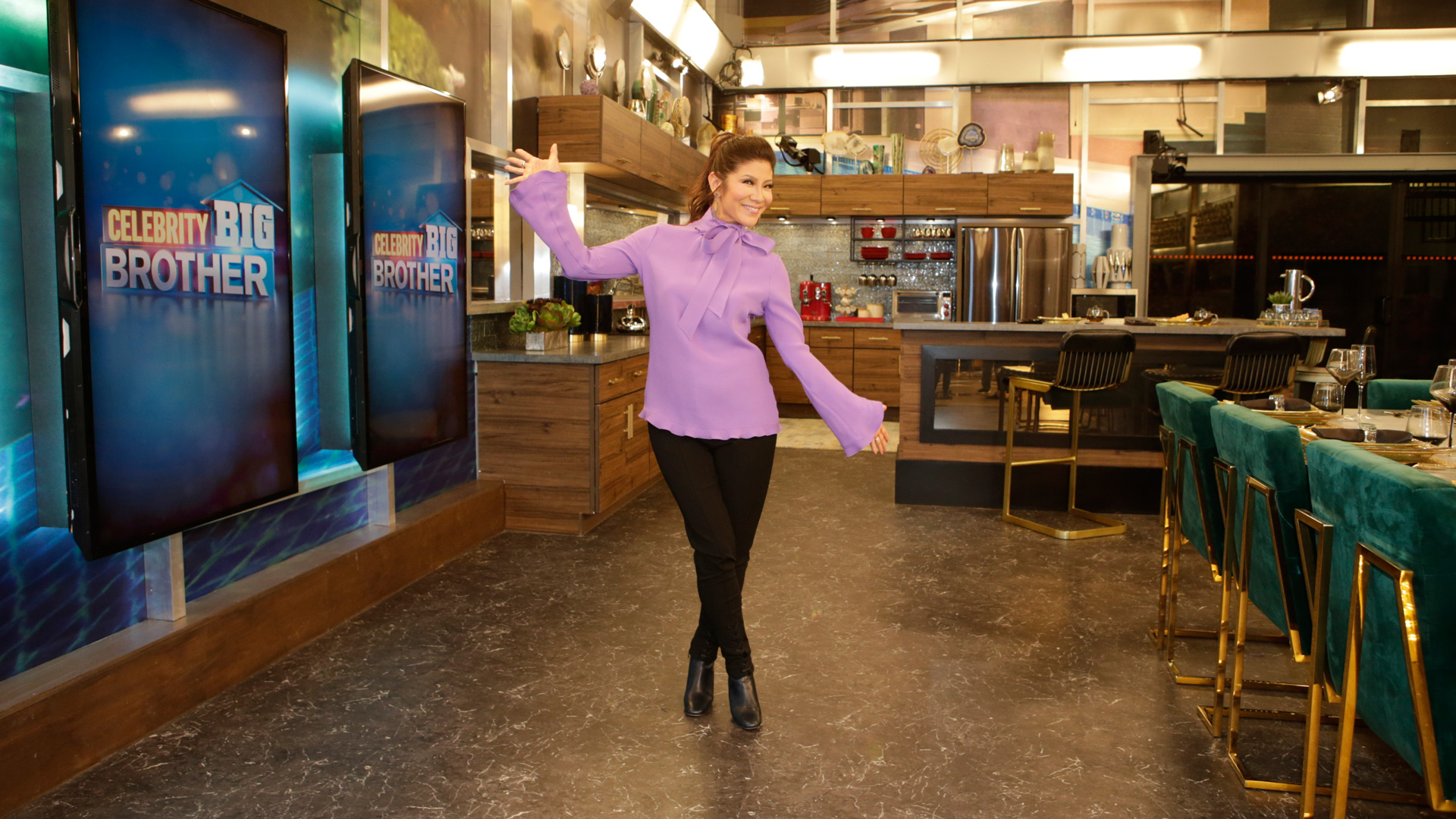 It's a season of "firsts" in the new, decked-out Celebrity Big Brother house!

All the interior details of the Celebrity Big Brother house have just been revealed—and guys, it's going to be a season of "firsts" in this swanky pad.

Not only is this season kicking off with a three-night premiere beginning on Wednesday, Feb. 7 at 8/7c on CBS and CBS All Access, but the house—which will have the 11 famous Houseguests living in the lap of luxury—will also offer some elements BB fans have never seen done before.

"We wanted to elevate the sophistication of the house design for the first-ever Celebrity Edition of Big Brother," said Allison Grodner, Executive Producer of Celebrity Big Brother. "Our Houseguests and viewers alike will be transported into the glamour of a Hollywood Hills home that embraces iconic Los Angeles and celebrity themes in every room."

Take a look for yourself when you click on for beautiful snapshots of the house.

Watch the three-night season premiere of Celebrity Big Brother starting on Wednesday, Feb. 7 at 8/7c CBS and CBS All Access. 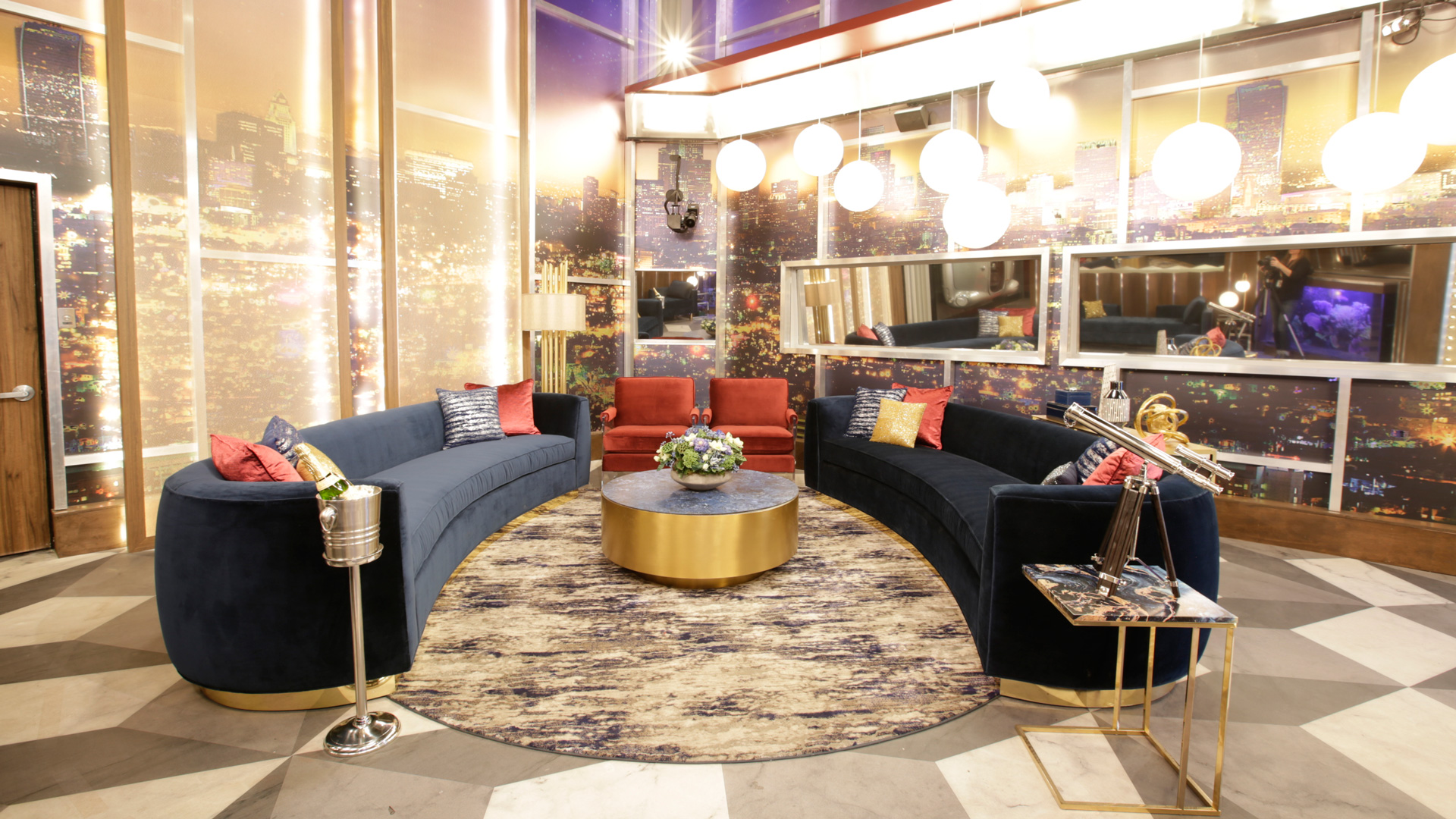 One stand-out "first" has to do with the overall theme.

For the first time, the living room, kitchen, and dining room will all share one cohesive theme—the Los Angeles skyline!

The skyline will span 64' wide across the entire living space and 23' tall, all the way from the floor to the ceiling in the two-story space.

What's even more brilliant is the fact that the impressive 2,768-square-foot mural of the skyline is printed directly onto mirrored plexi-glass to create the sparkle of a night sky. 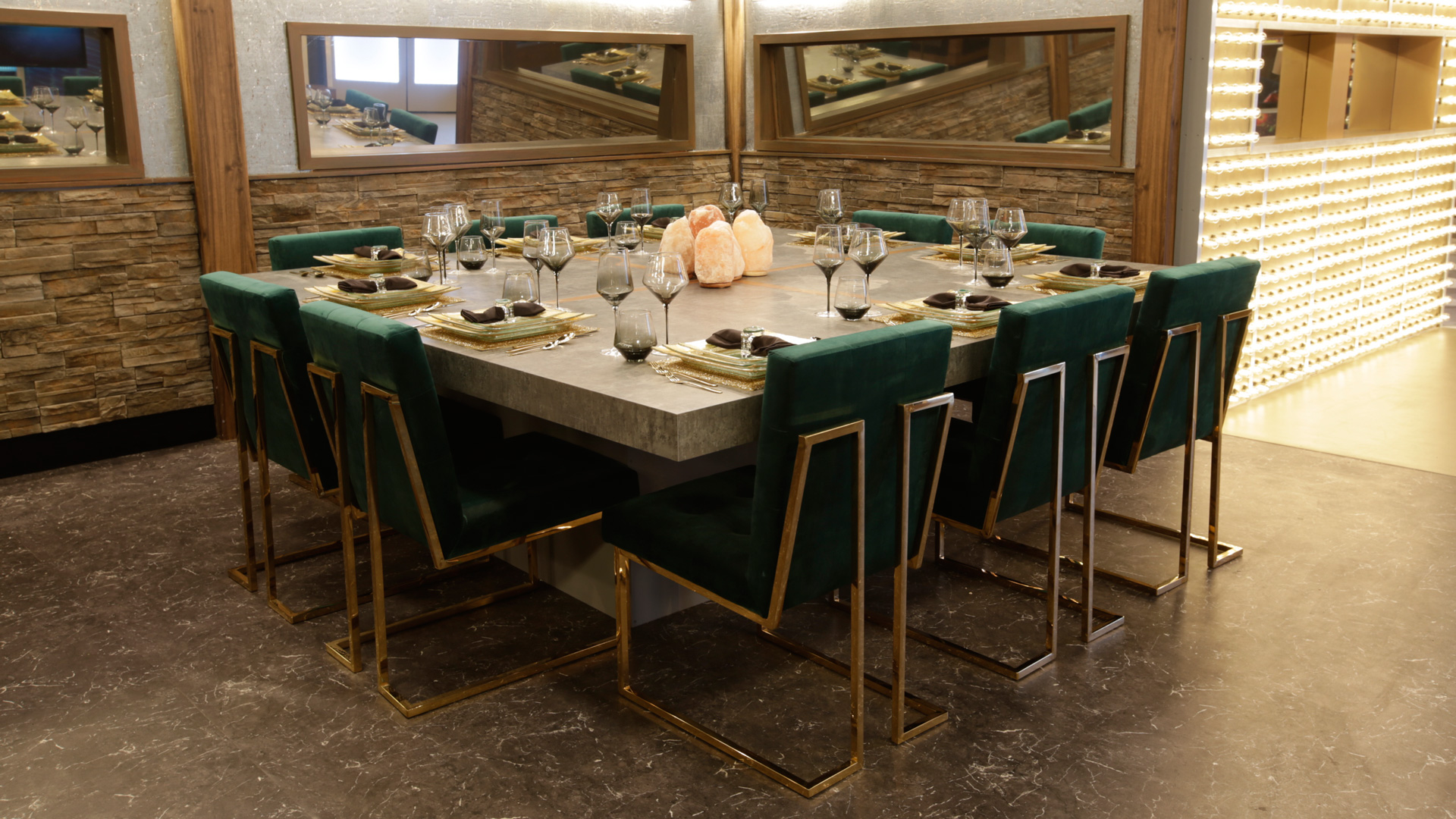 The next "first" can be seen in the dining room.

No, you're not seeing things.

Instead of the usual round dining room table, these famous Houseguests will all be sitting around one that's square in shape.

The table serves up a formal look of gold flatware and deep green velvet chairs.

Behind it, 108 powder-coated cameras are mounted over tabloid headlines that include the words "star," "headline," and "famous." 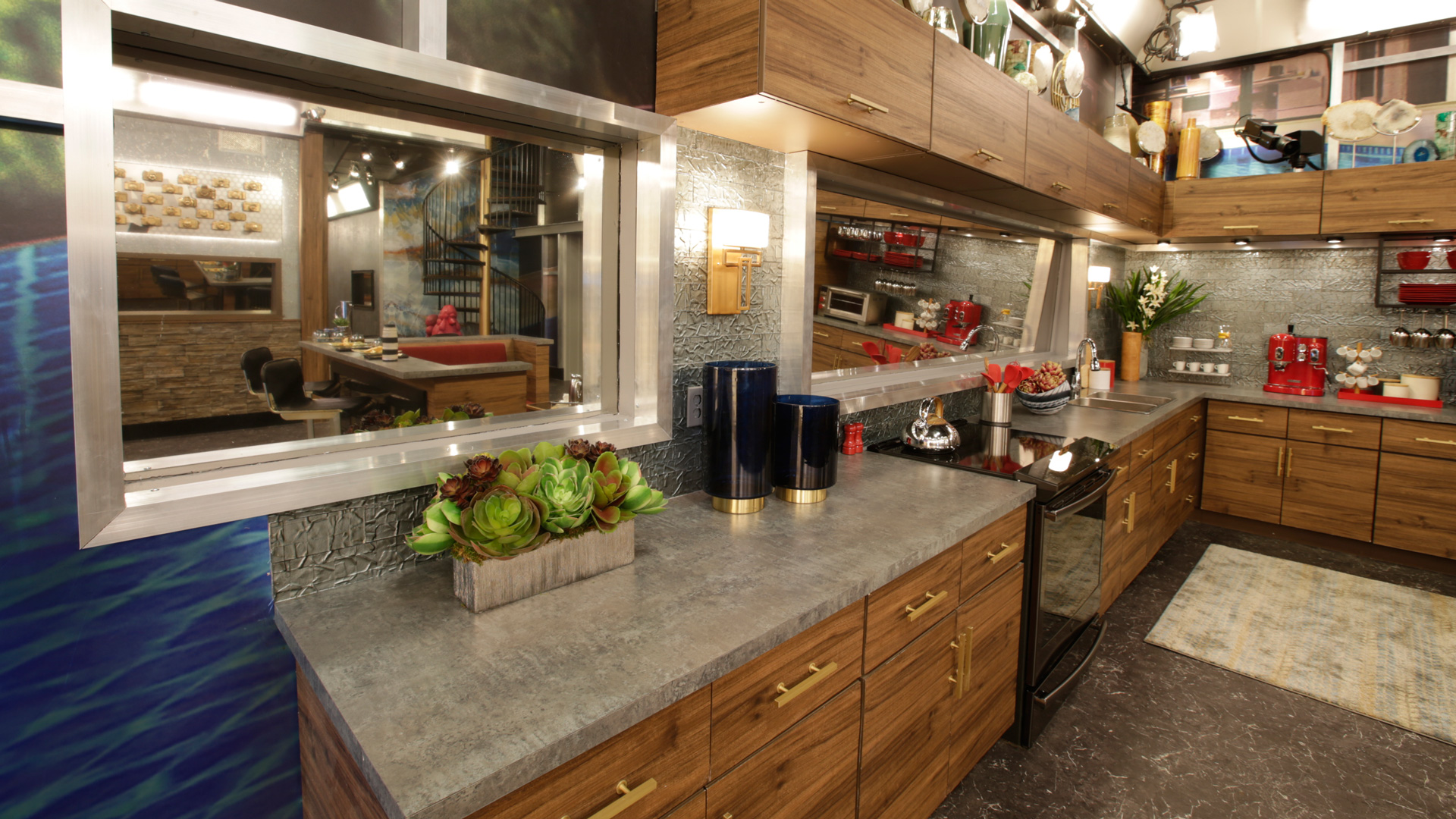 Speaking of the kitchen, did someone say "all new everything?"

The kitchen is outfitted in dark hardwood and features a unique eat-in banquette, unlike the island previous Houseguests have used.

The celebrity Houseguests will enjoy all-new appliances, including the house’s first espresso machine.

They're going to need all the caffeine jolts they can get for the competitions that are in store this season. 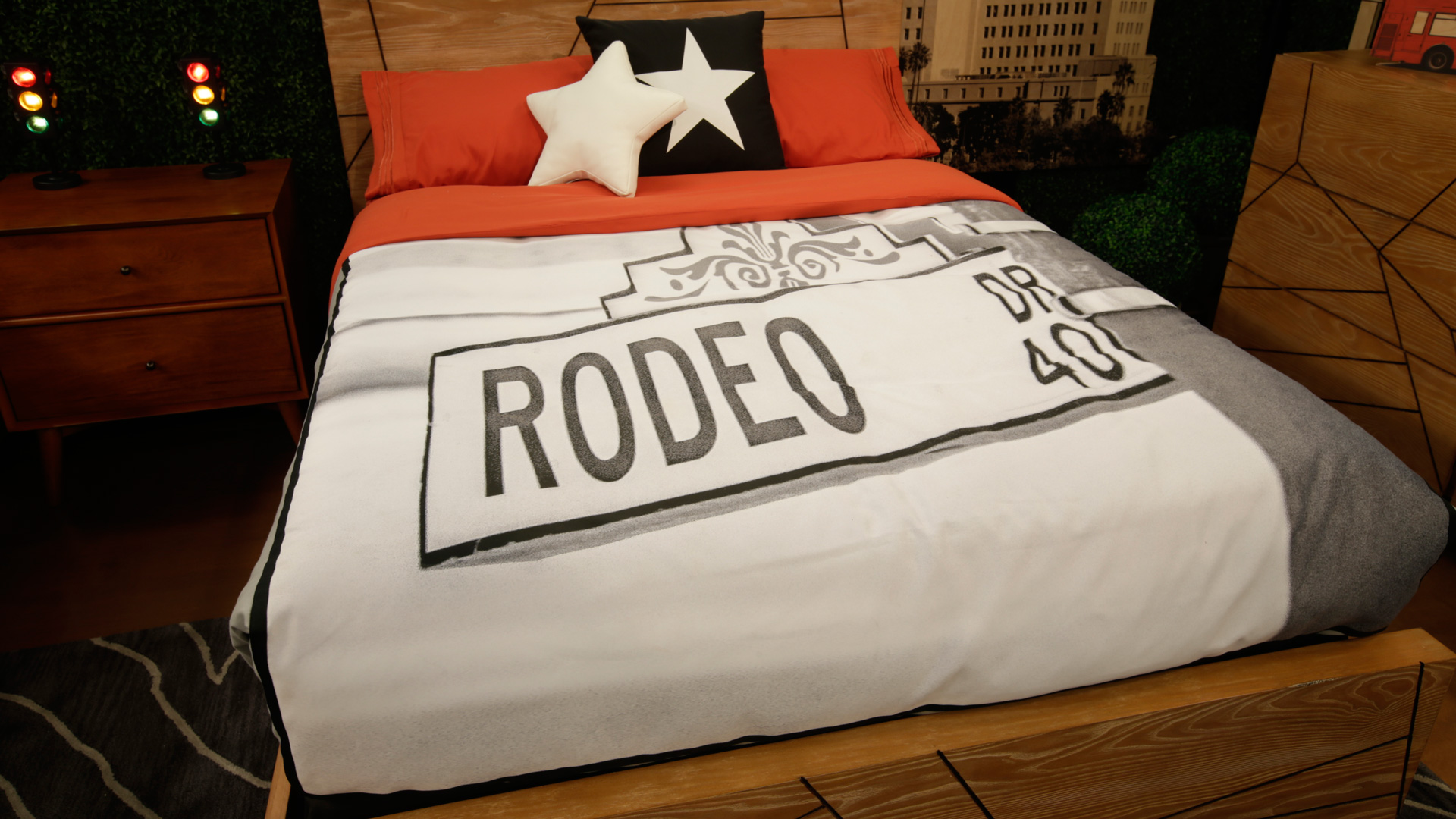 Another "first" will have each of the Houseguests sleeping in their own beds.

Each Houseguest gets a bed of their own. No sharing this season! 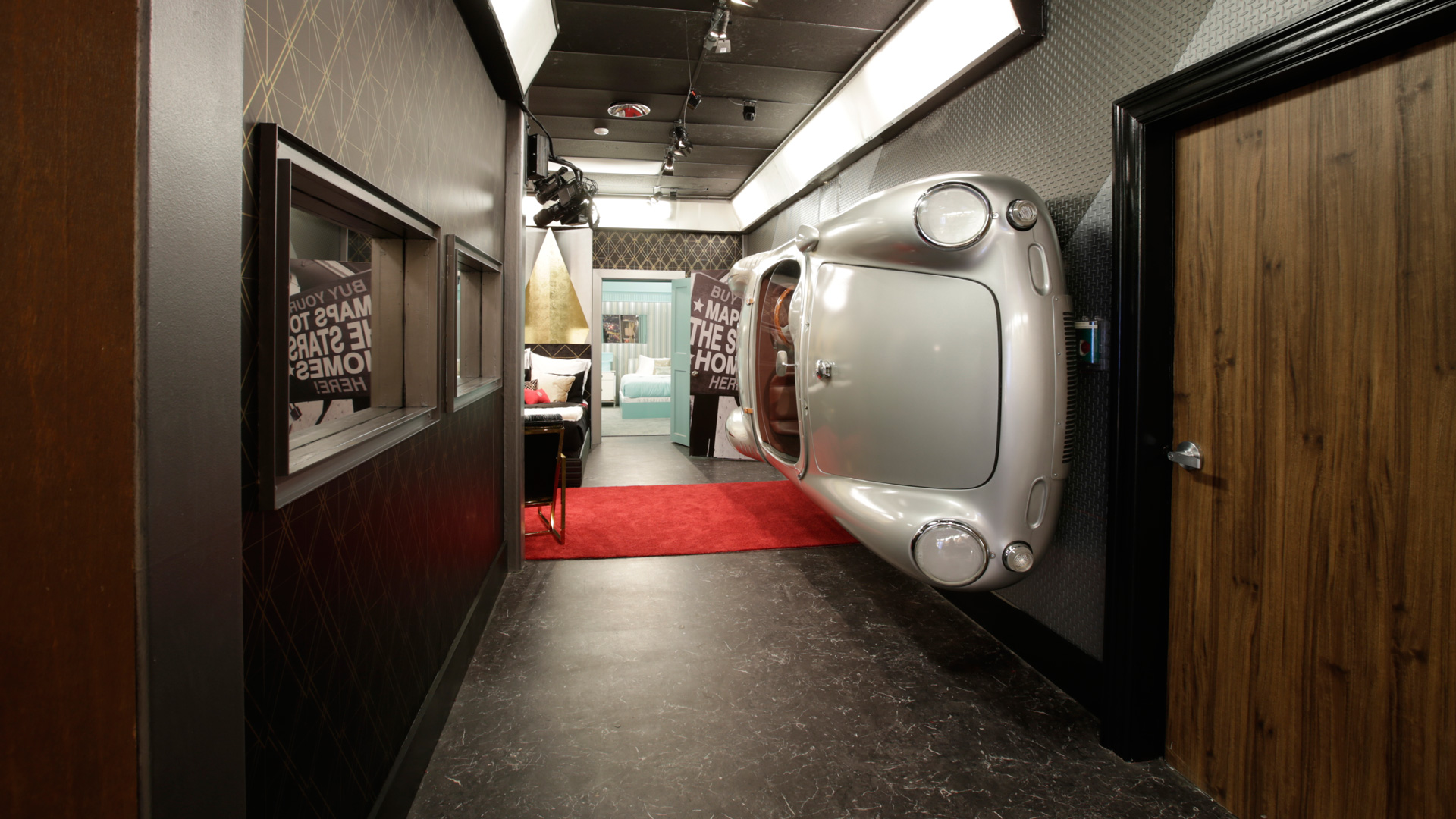 Wait, is that a car on the wall?

A classic Hollywood car will greet the Houseguests, with a detailed replica of a 1955 Porsche Spyder hanging from the wall of the bedroom hallway. In fact, the car was custom-built for the show!

Currently, the engine and all mechanical gear have been removed. Once the show is over, the car body will be returned to its creator and turned into an actual car. 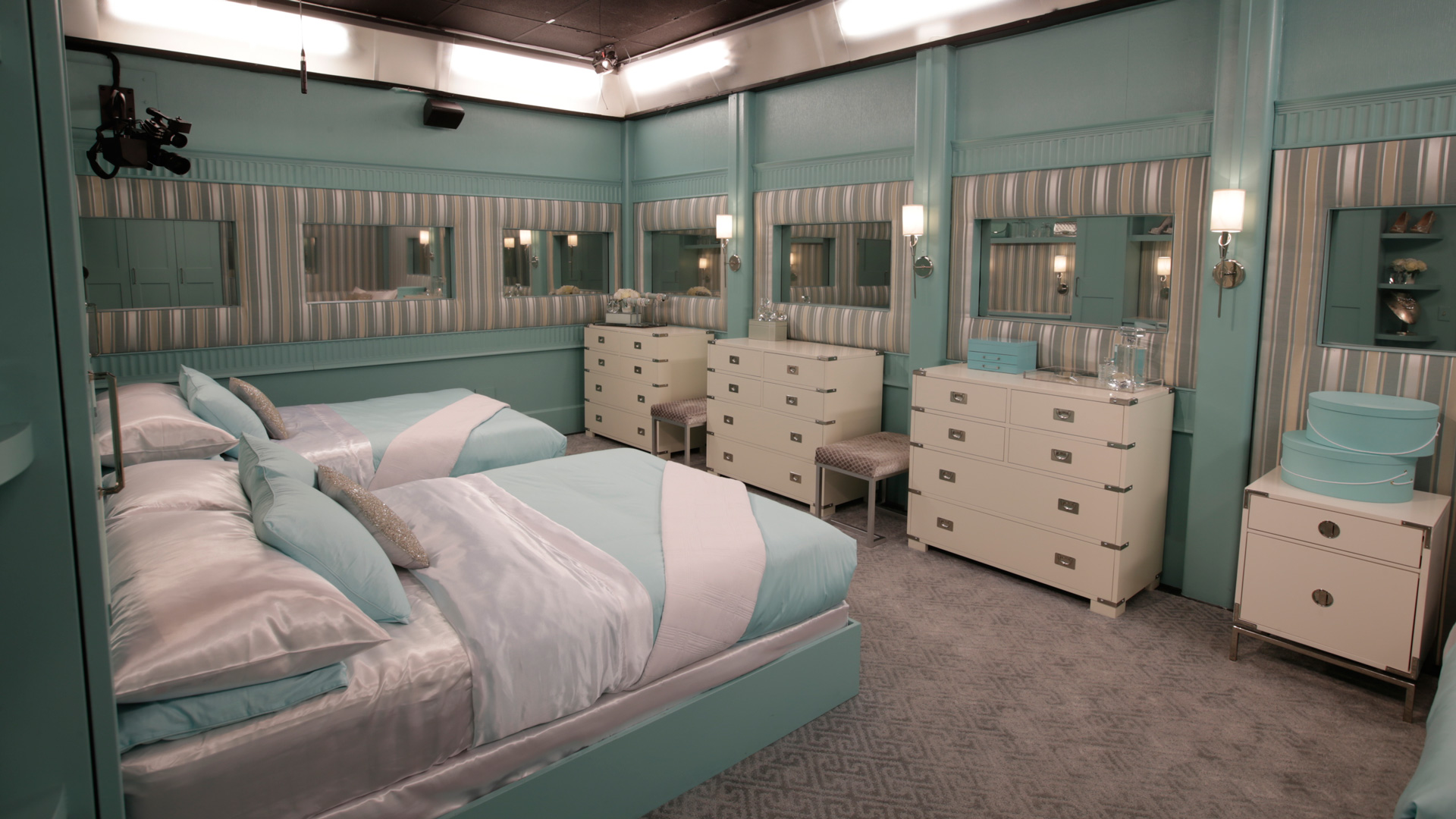 Take a look at the first of three bedrooms—the Blue Lavish Room.

This season, all the bedrooms will reflect the Hollywood Hills theme that is fitting for a cast so famous.

This blue bedroom looks like the inside of a celebrity closet with floor-to-ceiling closets, satin hangers, diamonds, and shoes. 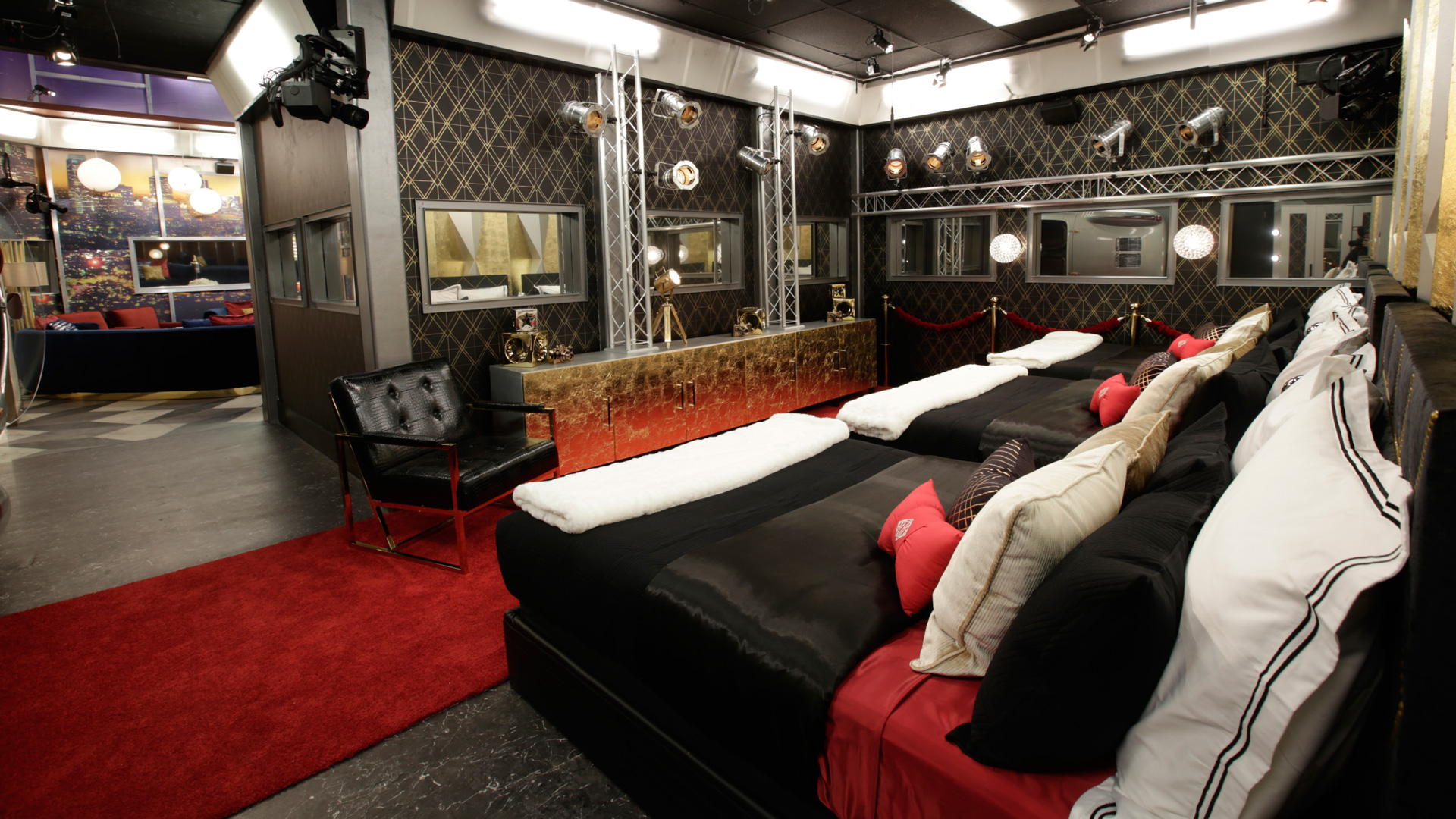 Roll out the red carpet to this room.

The Red Carpet Arrival Bedroom looks like a star-studded premiere event, doesn't it?

This space is outfitted with black-and-white satin sheets, a red carpet and gold stanchions, and even a glamorous step-and-repeat wall to tie the look together. 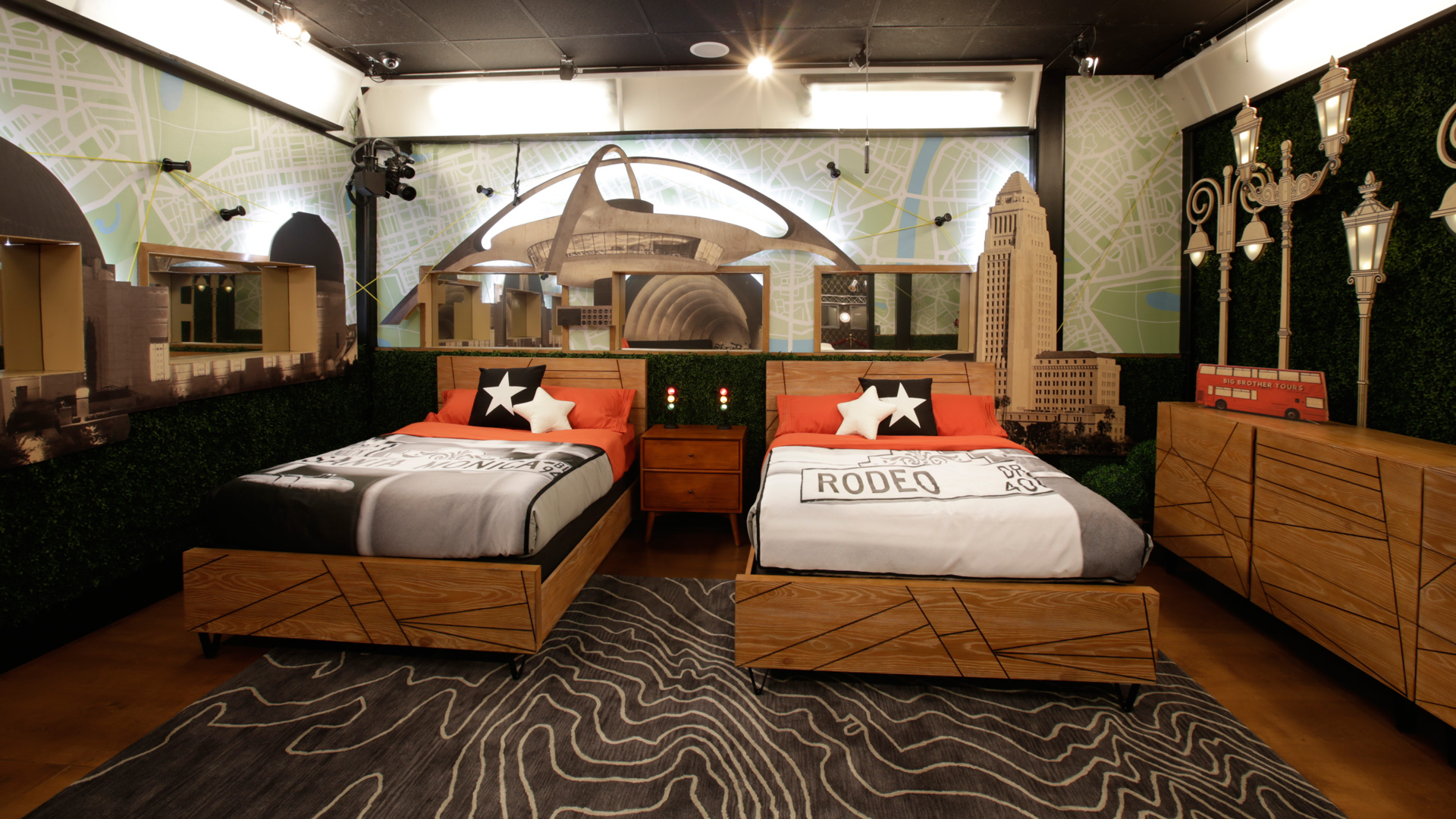 The third bedroom is focused on all of LA's famous landmarks. 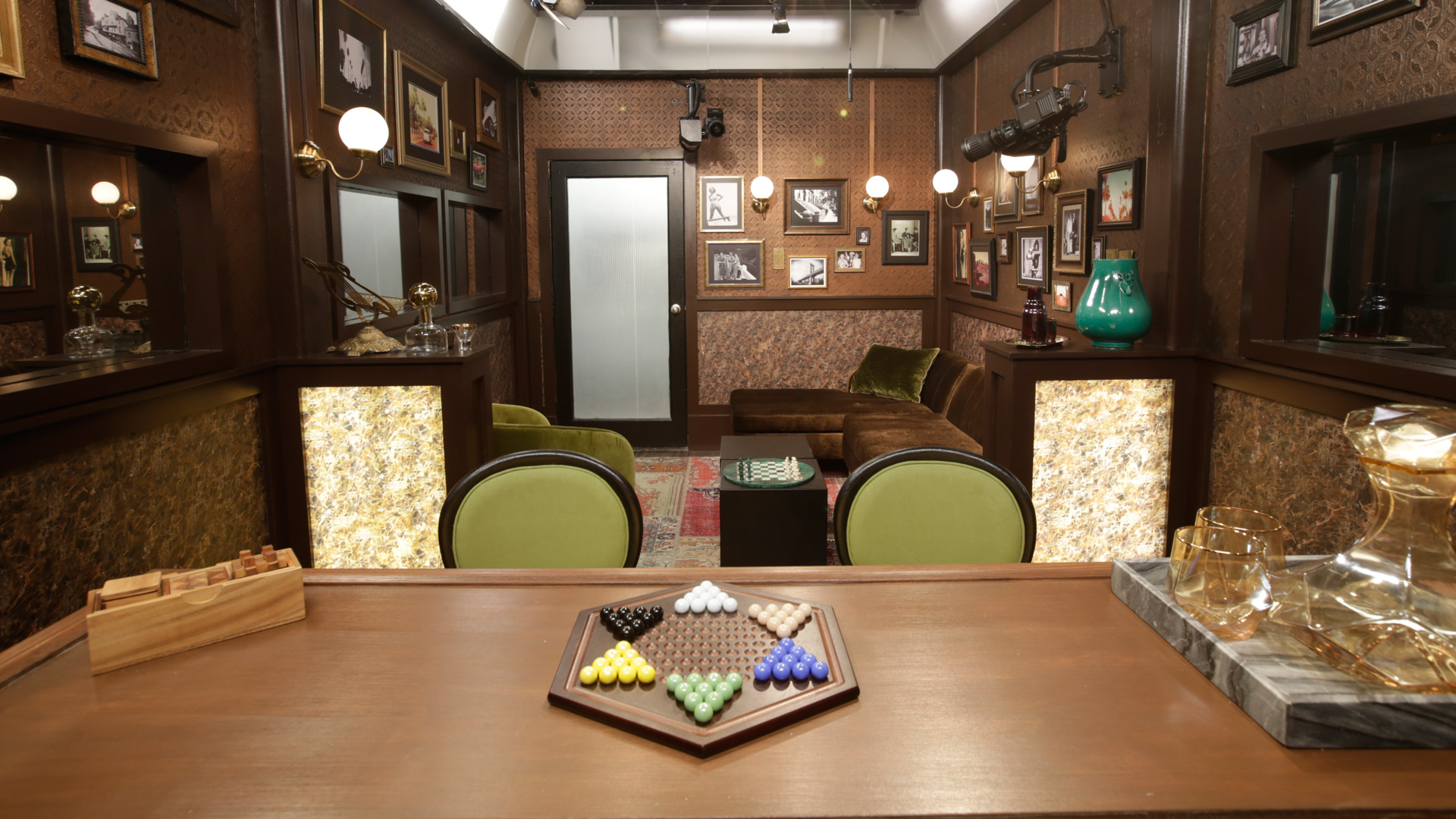 Alliances will most likely form in the Hollywood Speakeasy.

What better place for secret strategy meetings than this moody area?

This season’s Houseguests will probably spend the most time in the Hollywood Speakeasy. The walls are covered with photos depicting stars of classic Hollywood lore, and the dim lighting oozes intimacy and coziness.

The chess set, which is normally upstairs, is now located inside the speakeasy along with a new game, Chinese checkers. 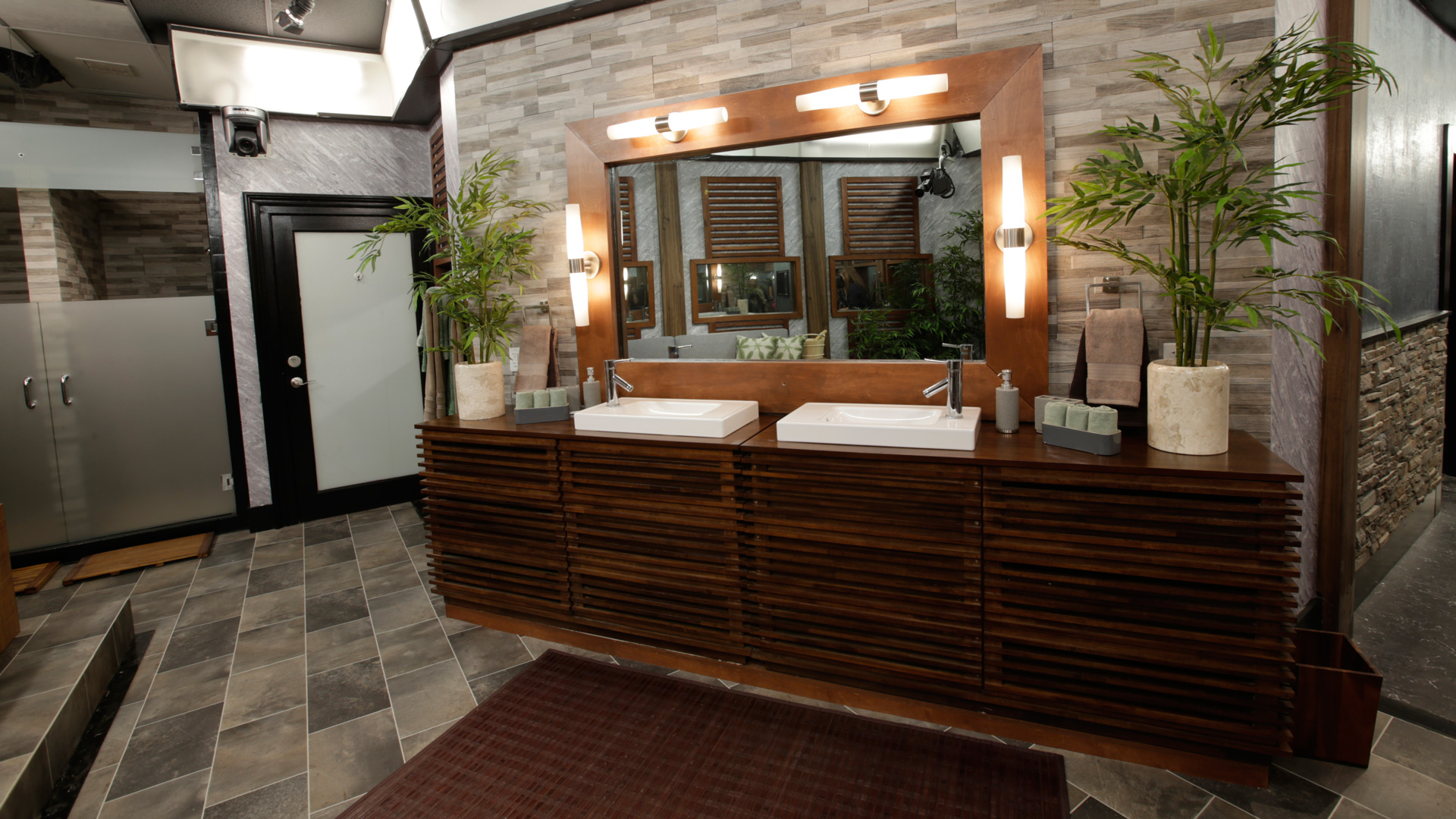 Wait—is this still the Big Brother house or have we been transported to an actual spa?

Luxury flows into the bathroom with this Japanese-inspired design.

The Houseguests might as well be in a five-star hotel spa with all this bamboo, a stone floor, black river rock, and an ample sofa.

This season, the group will have more privacy than former BB Houseguests, with a concrete wall that separates the two showers, along with two vanity stations. 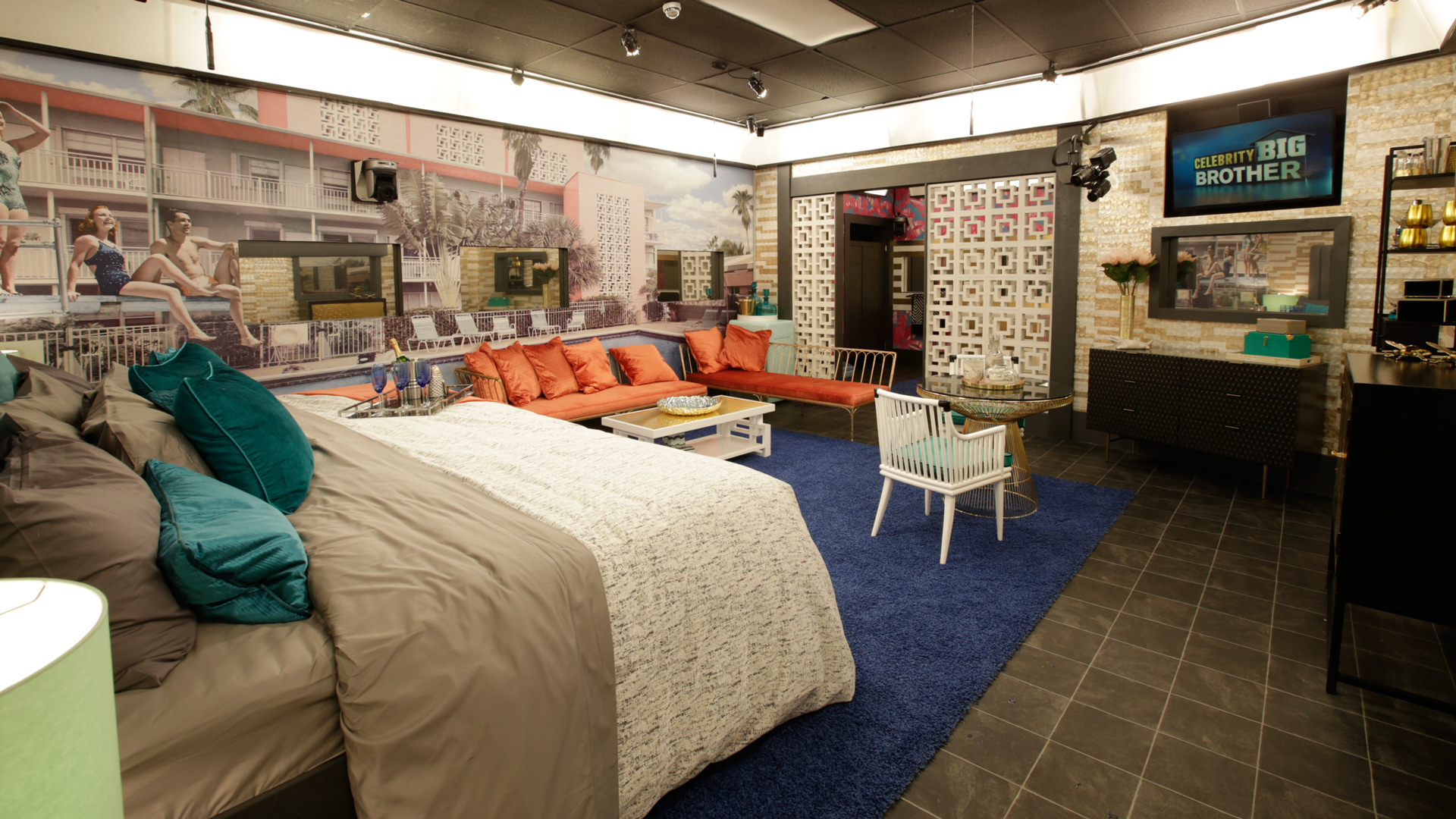 The Head Of Household Suite will feel just like a sunny retreat.

Upstairs, this season's HOH winners will enjoy a poolside cabana, with a vintage photomural that will make them feel like they just stepped out into their own little getaway.

The lucky HOH will also enjoy the biggest bed this room has ever seen: Two queen-size beds built together. 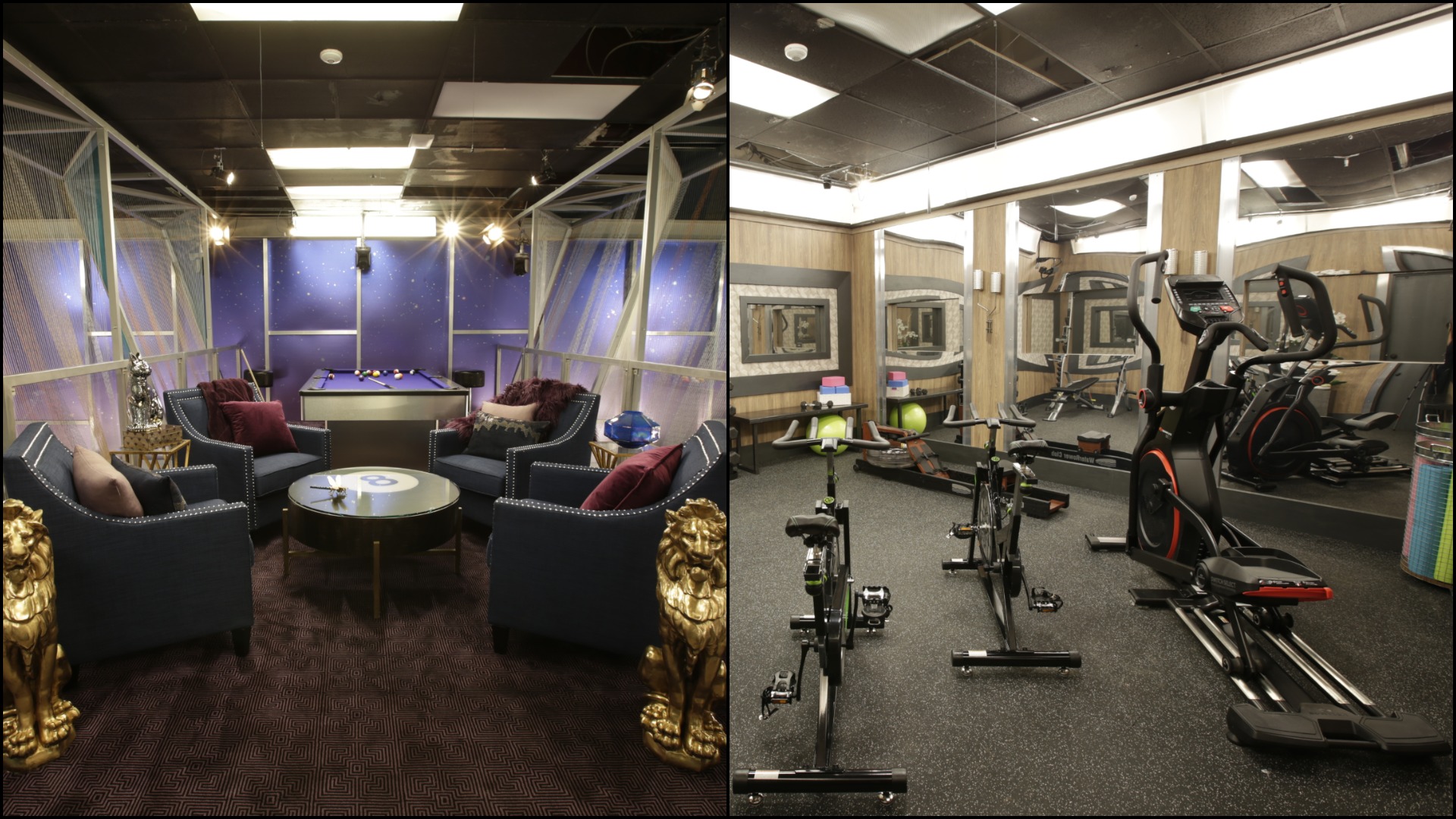 The Houseguests can break a sweat whenever they want in the 24/7 indoor gym.

With limited space in the backyard this year due to the constant competitions, a pool hall bridge has been created upstairs, as well as a new indoor gym which will be available to use 'round the clock. 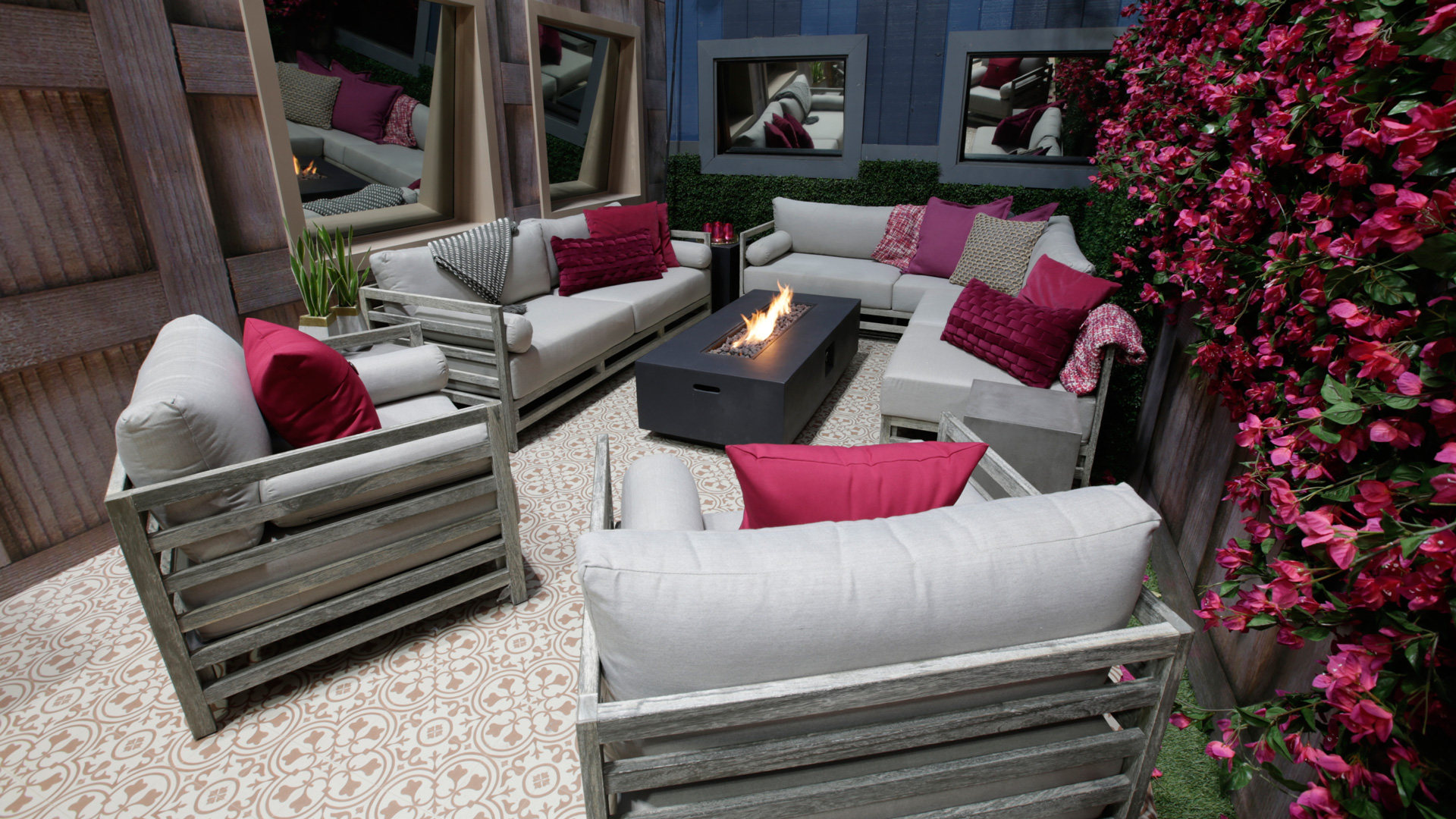 Let's travel to the backyard and see what's in store there.

The celebrity Houseguests will still be able to enjoy time outside for late night fire-pit chats and... 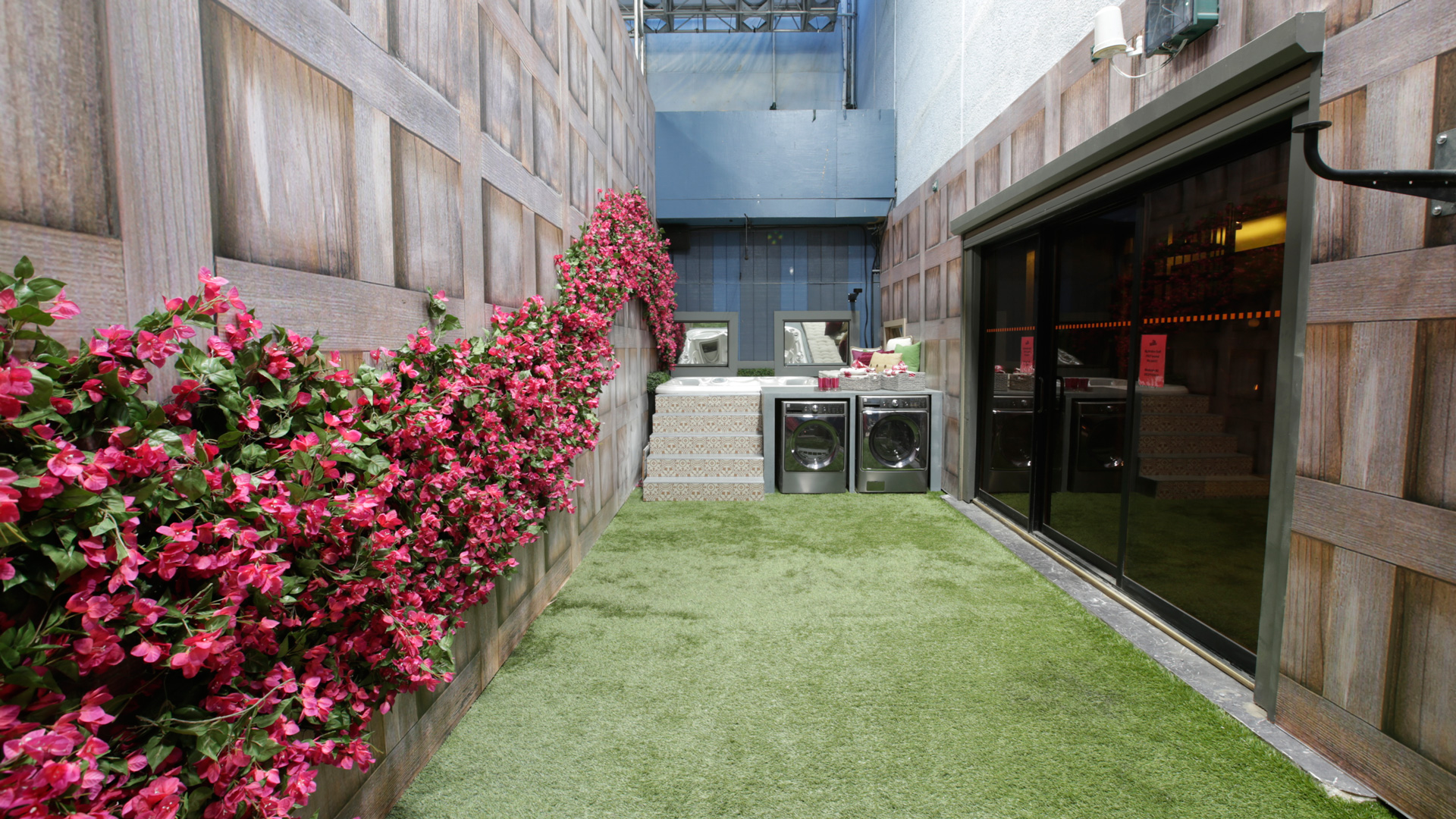 A jacuzzi to relax in.

It can't be all game talk and strategy.

How will this season's famous cast enjoy their new digs away from the comforts of home?

See all their reactions to the house when you watch the three-night season premiere of Celebrity Big Brother starting on Wednesday, Feb. 7 at 8/7c CBS and CBS All Access.