During the socially and politically charged night, the host brought some levity to the show.

After doing a stellar job last year, The Late Late Show host James Corden returned to host Music's Biggest Night®. The 60th Annual GRAMMY Awards® felt much different than last year's. The conversation around the entertainment has drastically changed and the awards show certainly reflected that.

Last year, James opened the show by falling down the stairs before launching into a goofy dance number. This year's show opened with a politically and socially charged performance by Kendrick Lamar, followed by a short monologue by James, where he joked, "We don't just have the most diverse group of nominees in GRAMMYs history, we also have, for the second year in a row, the least diverse host in GRAMMYs history.”

James seemed to step back a bit and allowed the music and musicians to do most of the talking. He did bring two prerecorded bits that injected the night with some needed humor to balance things out, though. 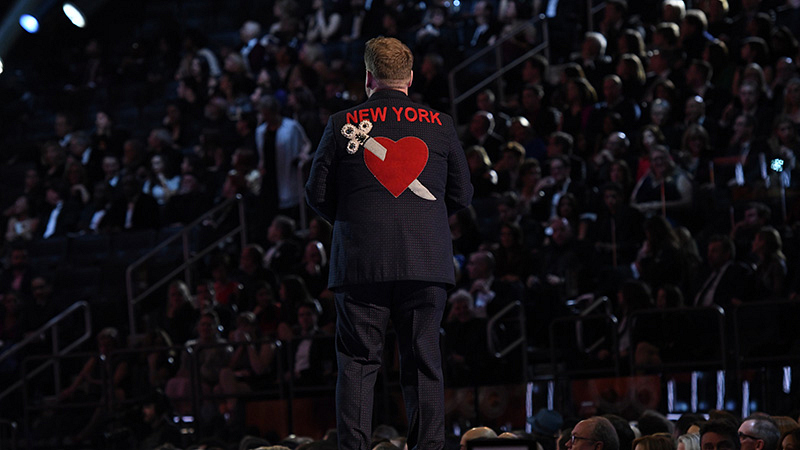 The first was Subway Car Karaoke with Shaggy and Sting. It didn't go quite as smoothly as the normal Late Late Show segment, though. Let's just say New Yorkers on the subway can't be bothered by performers, even famous ones.

The second video came after James set up the fact that all GRAMMY winners aren't musicians. The spoken-word category has been won by a variety of people, including Barack Obama and Hillary Clinton. So, James figured Donald Trump might like to get himself in the running for an award and held auditions to see who should voice the audio book of Michael Wolff's Fire and Fury. The people he got to participate were surprisingly great.

He didn't end there, either. Jerry Seinfeld, who was nominated for Best Comedy Album but ultimately lost to fellow comedian Dave Chappelle, earned a James Corden-gifted "consolation puppy."

James' parents, who stopped by last year to watch their son host the GRAMMYs, even showed up again this year—but not before their more pressing priority: Hamilton.

Overall, James did another strong job of hosting this year's show, and he'll no doubt continue to be in high demand for future awards shows.