Each year, the Recording Academy honors some of the industry's most influential and talented artists at the GRAMMY Awards; and while fans love seeing the golden statuettes and the glamorous red carpet fashion looks, the one thing we look forward to all year is seeing the stellar lineup of performances. After all, it wouldn't be Music's Biggest Night® without live entertainment and a few unexpected collaborations! Read on to see some of the jaw-dropping acts. 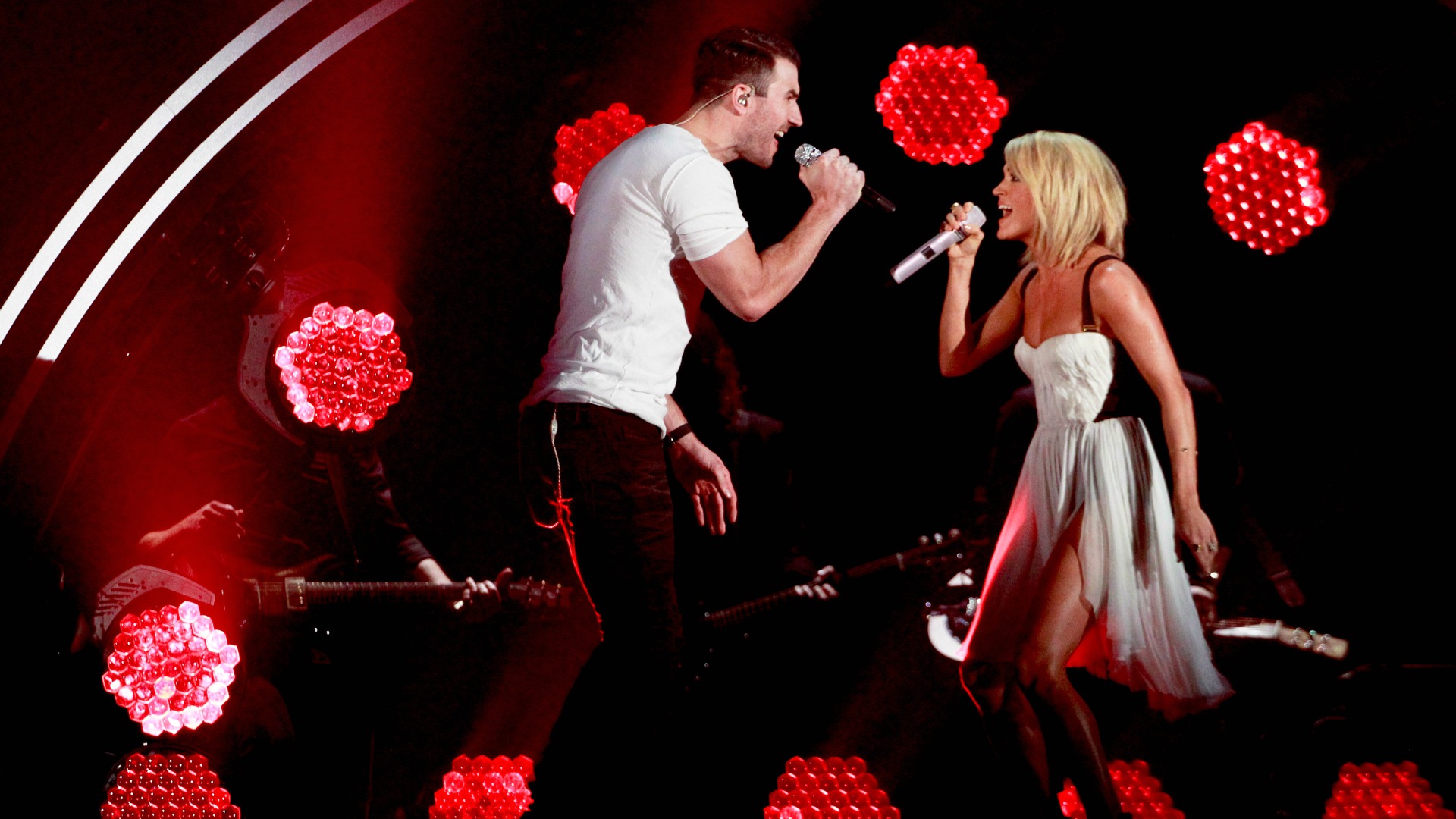 Each year, the Recording Academy honors some of the industry's most influential and talented artists at the GRAMMY Awards; and while fans love seeing the golden statuettes and the glamorous red carpet fashion looks, the one thing we look forward to all year is seeing the stellar lineup of performances. After all, it wouldn't be Music's Biggest Night® without live entertainment and a few unexpected collaborations!

One performance that had us stomping our feet was the epic collab of seven-time GRAMMY Award-winner Carrie Underwood and 2016 Best New Artist nominee Sam Hunt, who mashed their duet "Heartbeat" with Hunt's hit "Take Your Time."

With perfect harmonies and fiery passion dominating their performance, it's no wonder these two country crooners continue to top the charts! 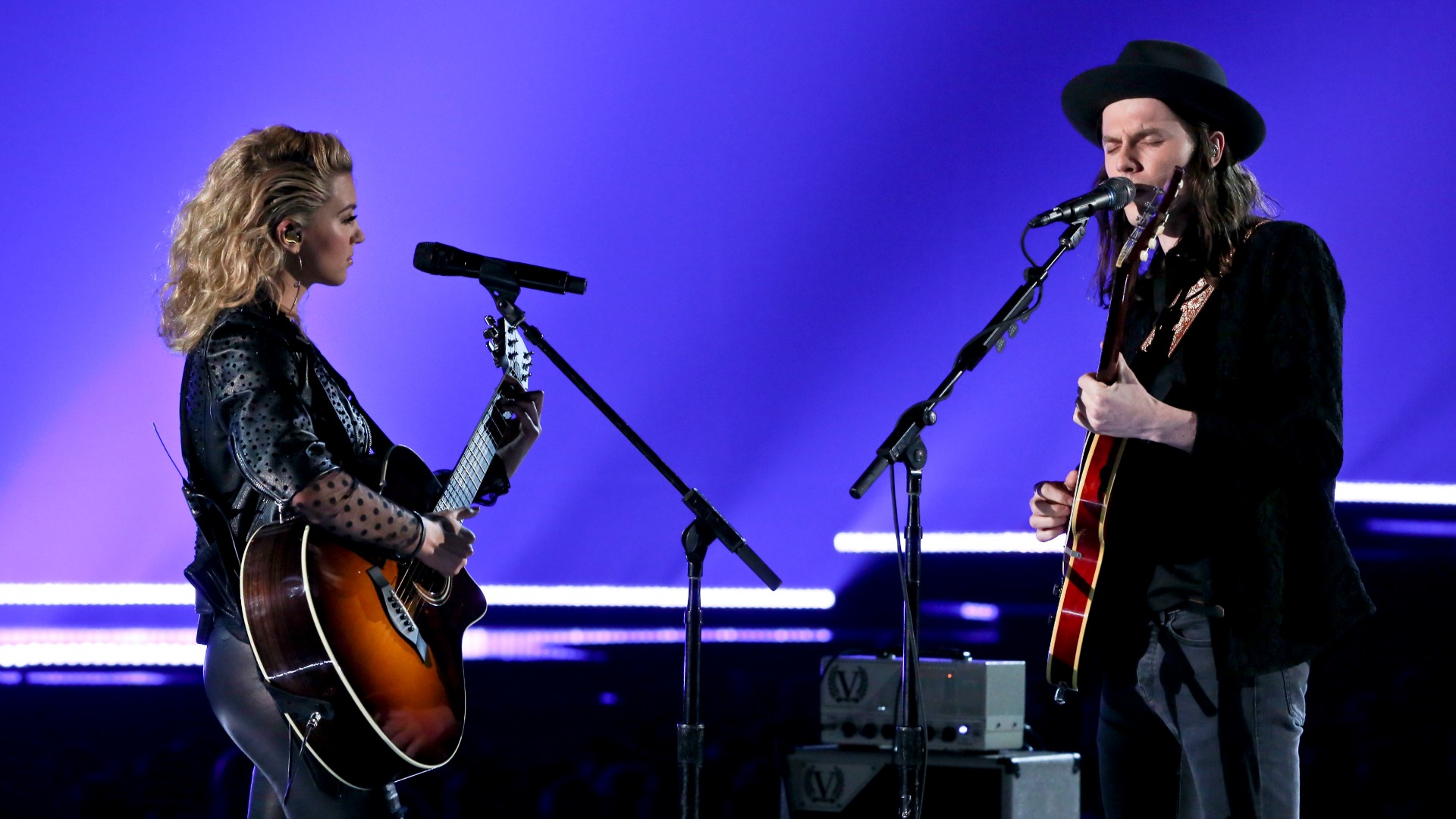 It's not often when two newcomers can walk onstage and command attention, but former YouTube star Tori Kelly and British crooner James Bay managed to leave the audience speechless at the 58th Annual GRAMMY Awards.

The 2016 Best New Artist nominees performed a soulful, moving mashup of two of their hit song—Kelly's "Hollow" and Bay's "Let It Go"—and filled Staples Center with only the sound of their guitars and incredible voices.

We'd be lying if we said we haven't watched this paired-down performance at least 15 times. Suppose you could say we just can't let it go! 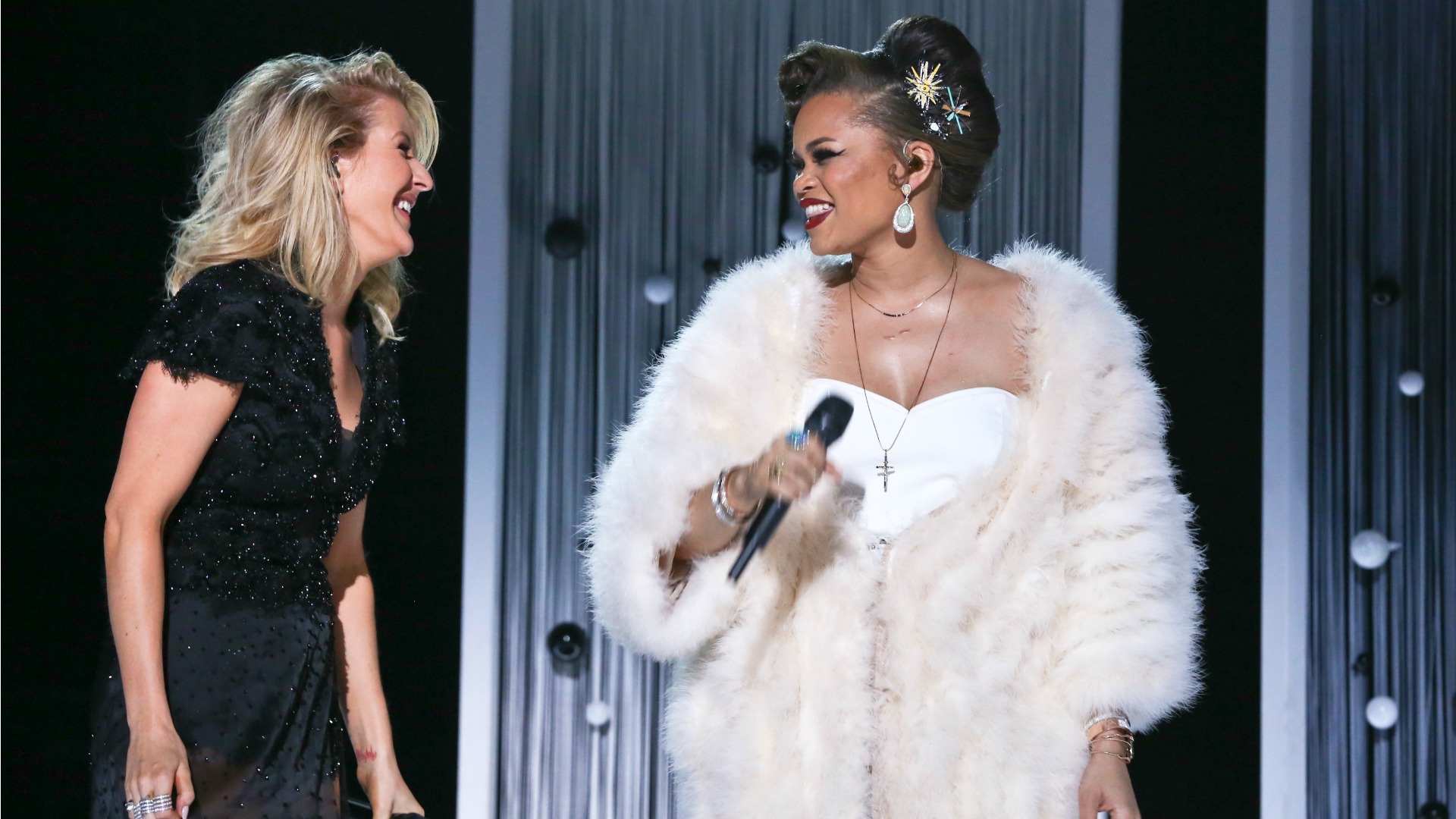 What do you get when you mix the upbeat sounds of EDM with the smooth flow of R&B? A transfixing performance from British singer/songwriter Ellie Goulding and vocal powerhouse Andra Day.

The dazzling duo captivated the crowd at the 2016 GRAMMYs when they combined Day's "Rise Up" with Goulding's "Love Me Like You Do," which received a GRAMMY nomination for Best Pop Solo Performance. 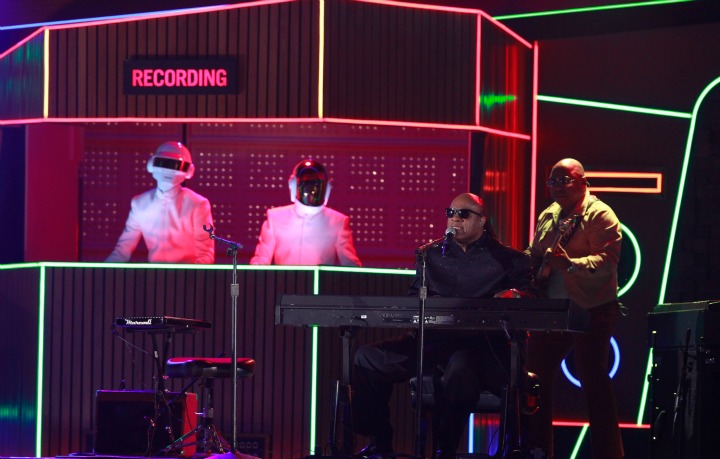 What happens when you put music icons Stevie Wonder, Nile Rodgers, Pharrell, and Daft Punk on the same stage? Well, besides an amazing performance, you get one heck of a party.

At the 56th Annual GRAMMY Awards, Pharrell (and the mini version of his famous 12-gallon hat) was joined by Wonder and Rodgers, who played a funk-heavy rendition of Daft Punk's GRAMMY Award-winning track "Get Lucky."

The French duo, who don't come out of robotic hiding for just any event, blew fans away when they appeared halfway through the song, decked out in white suits and robotic helmets. 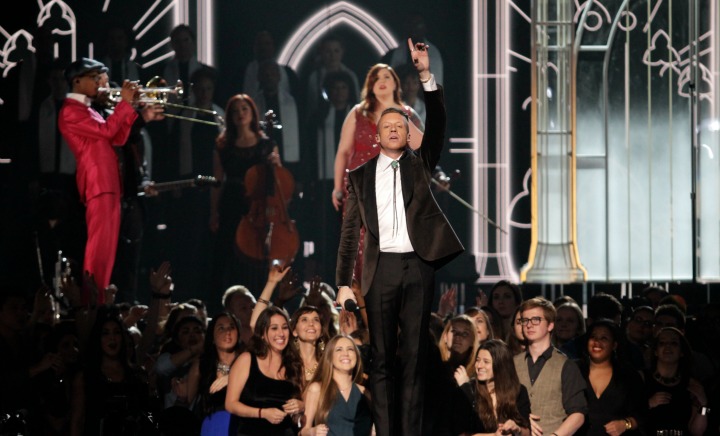 What makes this collaboration an unprecedented moment in GRAMMY history isn't just the incredible performance of the Macklemore & Ryan Lewis smash hit "Same Love," featuring Mary Lambert; it was how this marriage equality anthem united people in a real, tangible way.

Joined by jazz artist Trombone Shorty and pop icons Queen Latifah and Madonna, the hip-hop duo made both a musical and political statement as 33 couples—both gay and straight—exchanged vows on live television. With Queen Latifah officiating, Madge sang her '80s hit "Open Your Heart," sending a wave of hope and joy through a teary-eyed audience and serving as a reminder that both music and love can unite people. 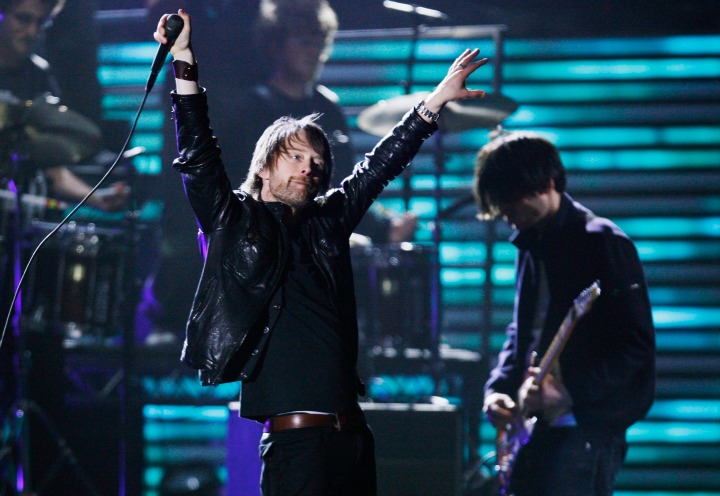 Radiohead and the USC Marching Band (2009)

Riding high on their five GRAMMY nominations in 2009, experimental-rock gods Radiohead delivered a groundbreaking performance of "15 Steps" at the ceremony. Accompanied by the USC Marching Band, singer Thom Yorke and guitarist Johnny Greenwood delivered both an ethereal and heart-pounding execution of the song from their GRAMMY Award-winning album In Rainbows. 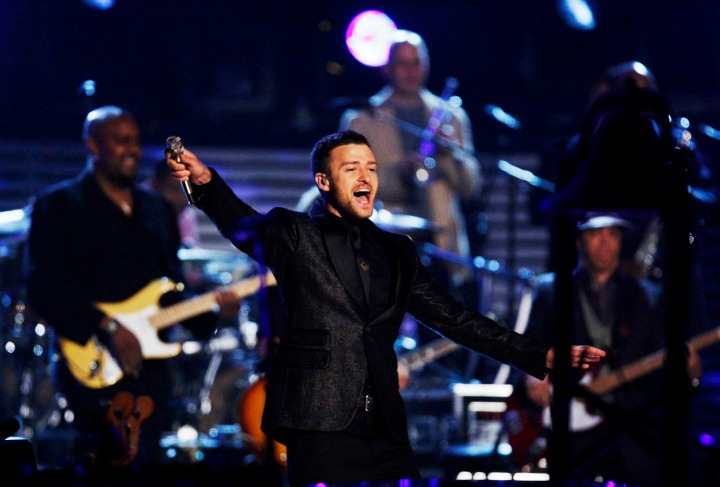 Without this performance of "Let's Stay Together," the 51st Annual GRAMMY Awards may've been a disaster. According to the L.A. Times, two acts dropped out from the performance roster unexpectedly, so GRAMMY Award Producer Ken Erlich found himself scrambling for replacements. On a whim, he asked Justin Timberlake to help fill the hole and was surprised when the star not only accepted, but went above-and-beyond to ensure a star-studded production.

JT called his friend Al Green, who happened to be in the shower at the time, and was able to recruit The Reverend to join that night's show, later adding Boyz II Men and Keith Urban to the lineup. With only hours until the ceremony, the men miraculously pulled off one of the decade's most memorable collaborations. 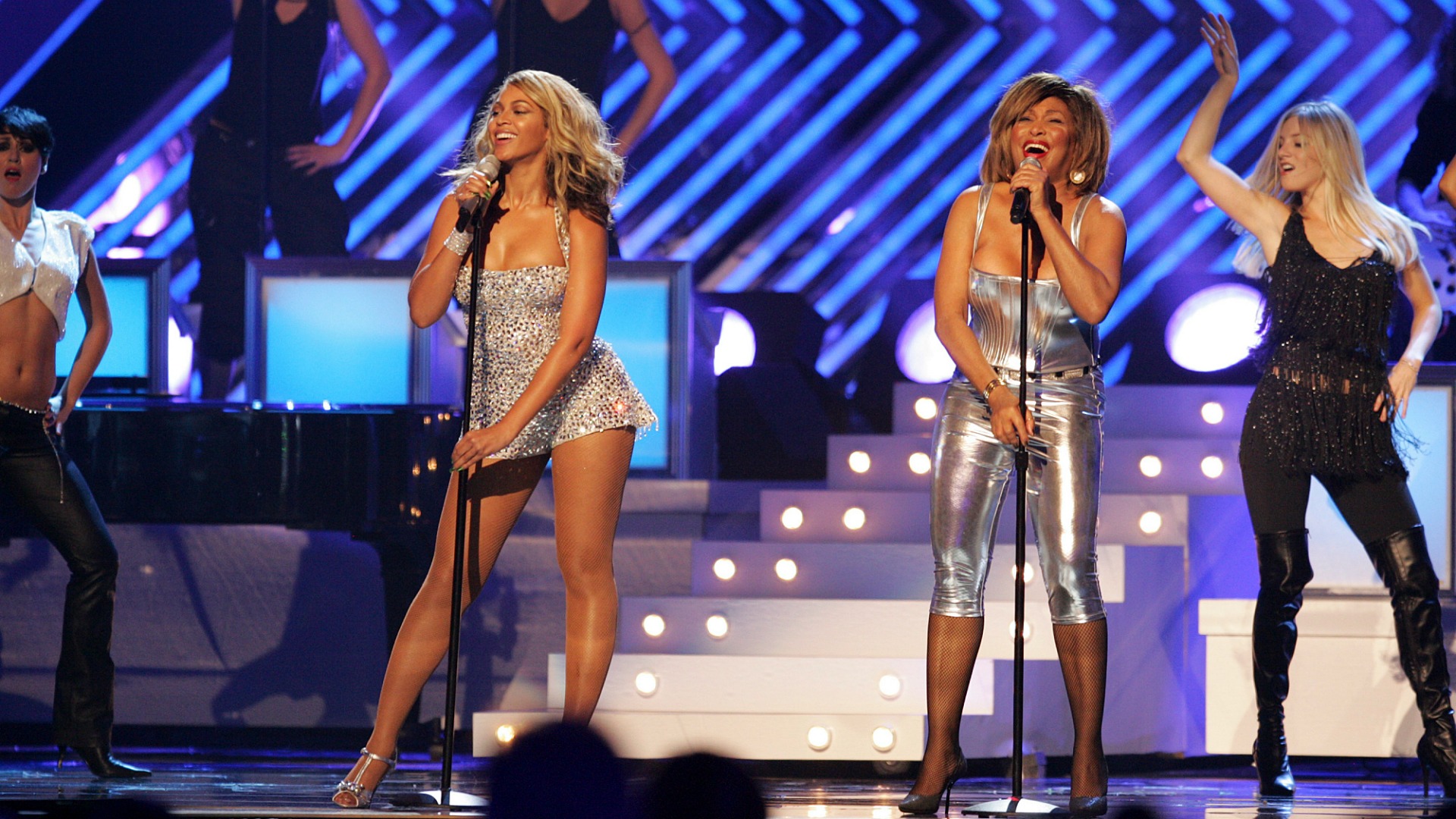 While she's revered as Queen Bey by millions of fans, Beyoncé bows down to another female music icon—Tina Turner!—so, when the two women performed "Proud Mary" together at the 2008 GRAMMYs, we couldn't help but curtsey to show our respect. 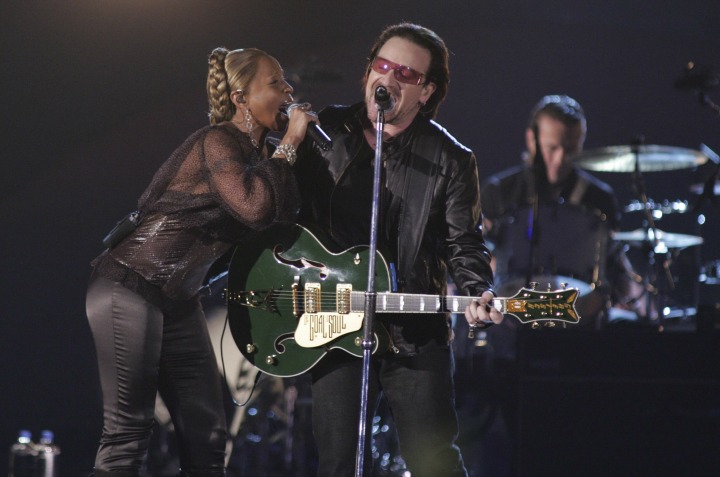 With vocals as smooth as his slicked back hair, Bono welcomed an angelic Mary J. Blige with a sweet introduction before the two mega-stars serenaded an electrified audience with a rendition of the Irish band's smash hit "One" at the 48th Annual GRAMMY Awards. 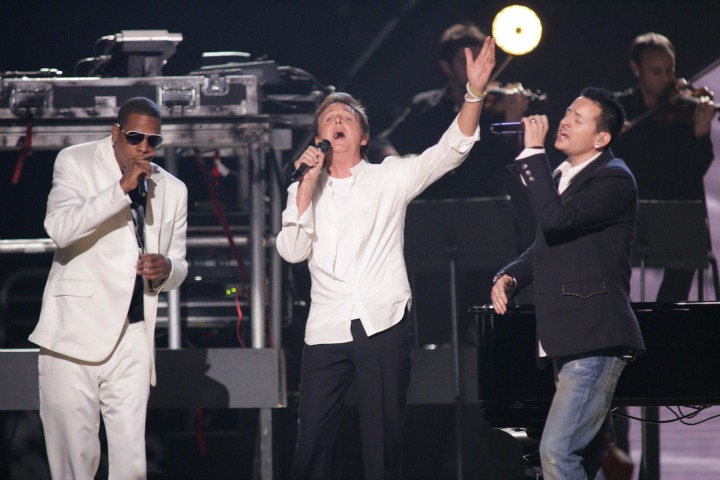 It feels just like yesterday that Jay-Z and Linkin Park teamed up to release their hits "Numb" and "Encore," yet this all-star collaboration actually took place a decade ago. Seeing this rap-rock mashup at the 48th Annual GRAMMY Awards was electrifying and the lights nearly burned out when Sir Paul McCartney walked on stage and launched into The Beatles' hit "Yesterday." 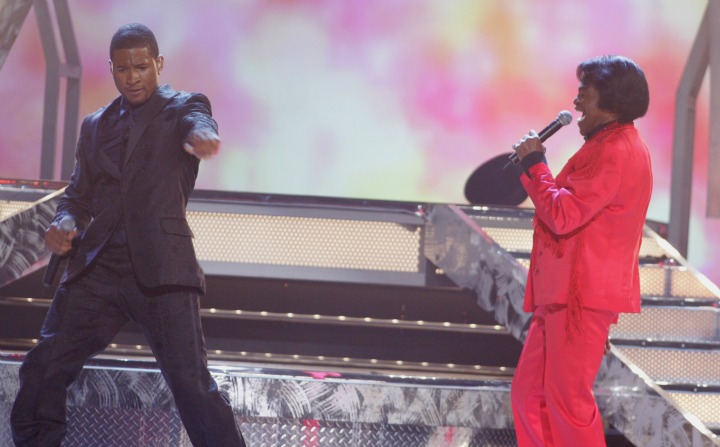 Usher solidified his role amongst the R&B greats at the 47th Annual GRAMMY Awards when he performed his single, "Caught Up," and then launched into a seductive duet of "Sex Machine," complete with vocals and side-by-side gyration from soul legend James Brown.

Anyone else think it's getting a little hot in here? 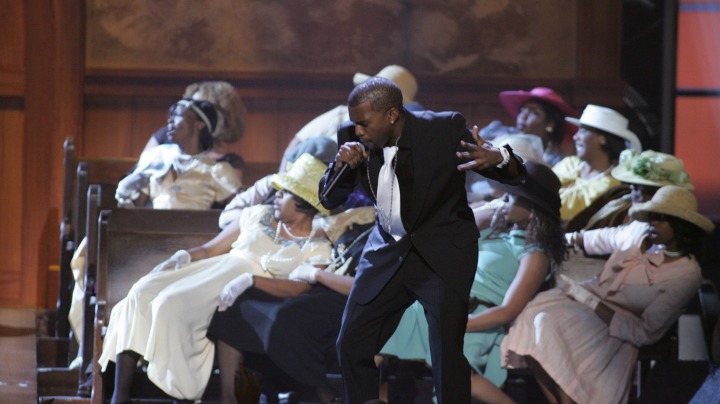 After losing Best New Artist to Maroon 5, Kanye West funneled his aggression into his first GRAMMY performance, which was a bold rendition of "Jesus Walks," supported by pews of choral singers and a live band. When the GRAMMY Award-winning track came to an end, Kanye briefly exited the stage as the focus shifted over to John Legend and The Blind Boys Of Alabama, who were standing around a coffin and passionately crooning "Old Glory"—but that wasn't the end for Mr. West.

For the collaboration's finale, the rapper reappeared in all-white, ending the song while suspended above the churchgoers and wearing massive angel wings. Praise Yeezus. 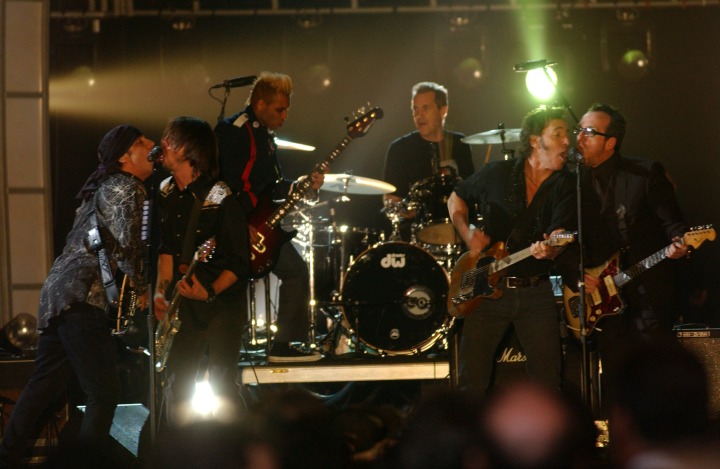 In 2003, rock legends Bruce Springsteen, Dave Grohl, Steven Van Zandt (aka "Little Steven"), and Elvis Costello dedicated an emotional performance of "London Calling" to The Clash frontman Joe Strummer, who passed away just months before the ceremony. Perhaps the most notable moment from the performance was when Costello paid homage to the late punk-rocker, spitting out the song's last line just the way Strummer always did.

Had he been alive, Strummer would have received his first GRAMMY that night alongside the rest of his band, who took home a golden gramophone for Best Long Form Music Video for "West Way To The World." 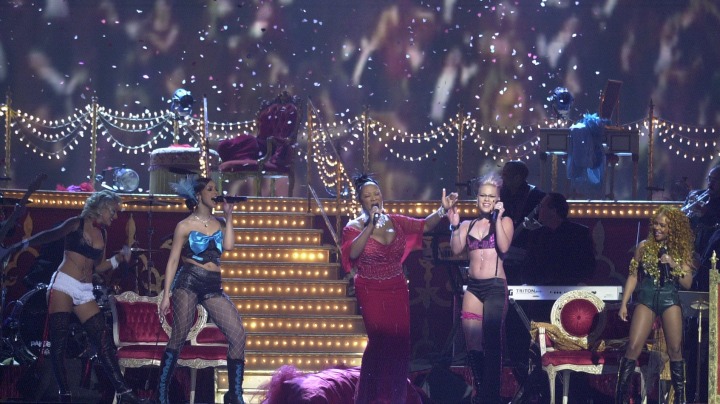 These powerhouse female vocalists transported the entire audience to Paris' Moulin Rouge when they performed their reboot of "Lady Marmalade" in sexy burlesque-inspired costumes at the 44th Annual GRAMMY Awards.

Fans were utterly entranced by the choreography and collective vocal talents. Then, just when you thought the number couldn't get any more exciting, the one-and-only Patti LaBelle took the stage by storm in a show-stopping red dress and statement-making diamond necklace. The disco diva joined in to sing the song that helped her rise to fame in the '70s—and we weren't the only ones fangirling, either. At the end of the song, all of the women bowed down to LaBelle. Literally. 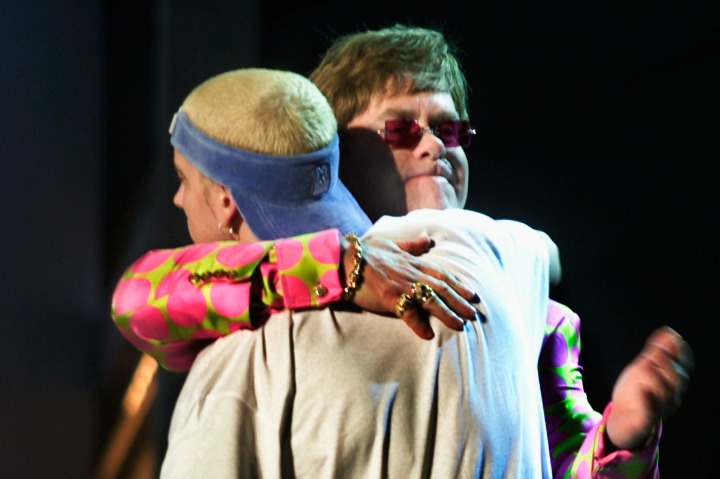 When Eminem performed at the 2001 GRAMMYs, no one anticipated him bringing along music legend Elton John. You don't get stranger musical—or fashion—bedfellows than these two. But, trust us, once this pair launched into the Detroit rapper's stalker hit "Stan," fans couldn't believe this was only the first time they performed together on stage.

Eminem's gritty lyrics were accompanied by Elton's award-winning vocals for a rendition of the song that still blows us away 15 years later. The most unforgettable moment of the performance, however, was when the two men embraced in a big hug at the end of the performance.