All Of The Most Shocking Moments In GRAMMY History

After more than five decades of watching the GRAMMY Awards, you'd think fans might be immune to the surprising wins, outrageous performances, and head-turning red-carpet outfits. But, each year, we find ourselves floored, yet again, as music's hottest stars still manage to find a way to shock. Stream the 2017 GRAMMY Awards on-demand. 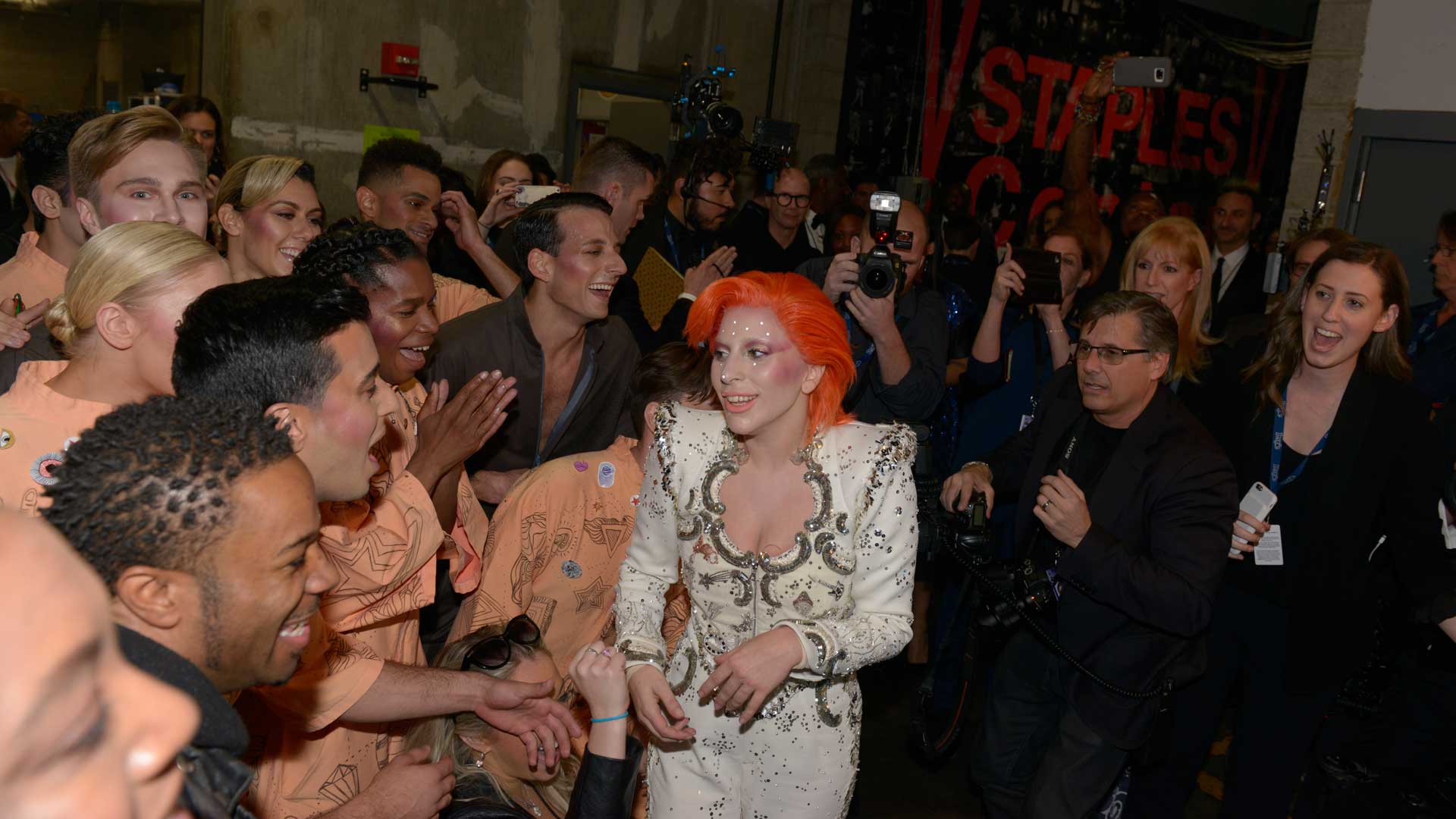 Lady Gaga's tattoo tribute to the late David Bowie in 2016.

After more than five decades of watching the GRAMMY Awards, you'd think fans might be immune to the surprising wins, outrageous performances, and head-turning red-carpet outfits. But, each year, we find ourselves floored yet again as music's hottest stars still manage to find a way to shock.

Let's take a look at some of most jaw-dropping GRAMMY moments from over the years, starting with an artist who always keeps viewers guessing: Lady Gaga.

Why jaws dropped:
Before Lady Gaga was set to the 2016 GRAMMY stage to pay tribute her idol, David Bowie, with a medley of his most beloved and legendary songs, she stopped by a tattoo shop to add some fresh Aladdin Sane-inspired ink to her torso.

Needless to say, when Gaga announced the news via social media the night before her epic performance, fans and fellow Bowie lovers went berzerk because it was the perfect way for Mother Monster to honor Ziggy Stardust. 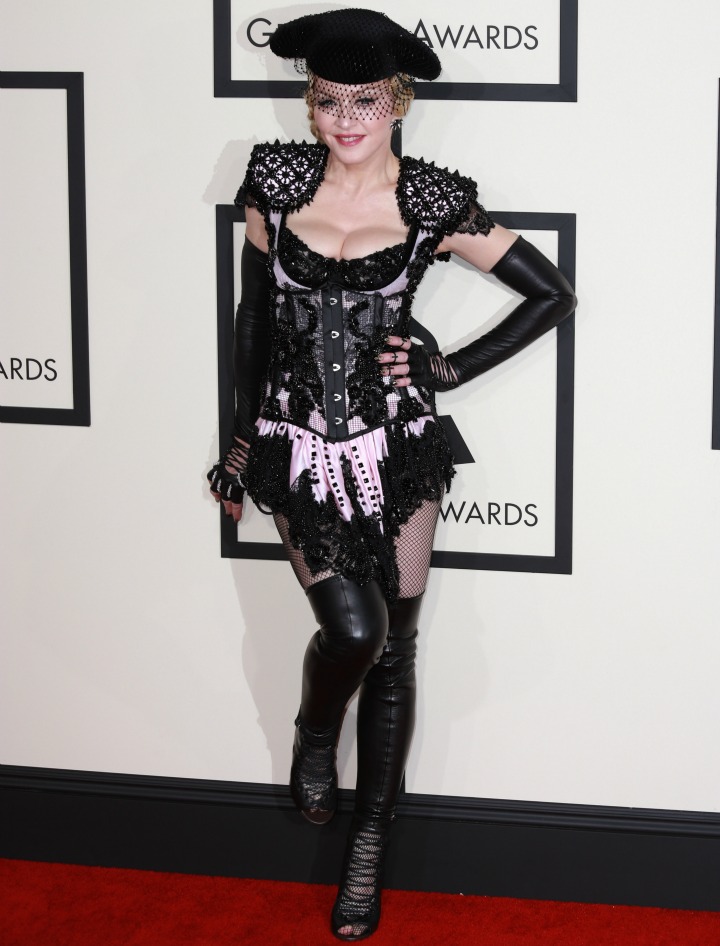 Madonna bared her bum on the 2015 GRAMMY red carpet.

Why jaws dropped:
Madge has titillated audiences since the '80s. From pointy bras to dropping F-bombs on live television, it seems there's nothing the "Queen of Pop" hasn't done. But when she showed off her buns to photographers on the 2015 GRAMMY red carpet, people everywhere went into a frenzy.

After entertaining the world for over 30 years, this rad 57-year-old icon still keeps us on our toes. 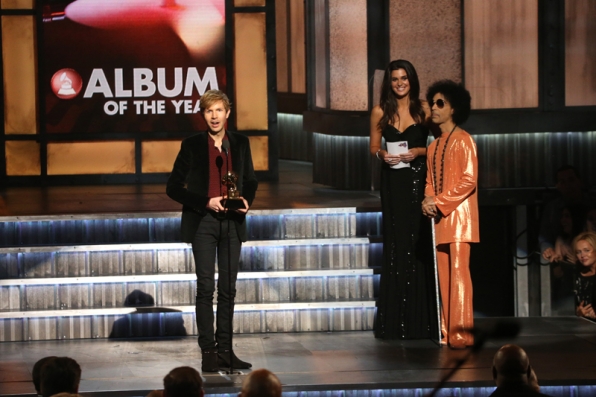 Kanye once again made himself the subject of someone else's win.

When pop icon Prince announced that indie-rocker Beck beat out a number of talented artists, including Beyoncé, to win Album Of The Year for Morning Phase, no one—including Beck—really knew how to respond. Looking more shocked than excited, Beck barely had the chance to open his mouth before Kanye West walked onto the stage, thought twice, and swiftly returned to his seat.

But, while he refrained from bad-mouthing the winner on stage, Kanye had no problem telling reporters after the GRAMMYs just how he felt, saying: "Beck needs to respect artistry, and he should have given his award to Beyoncé." 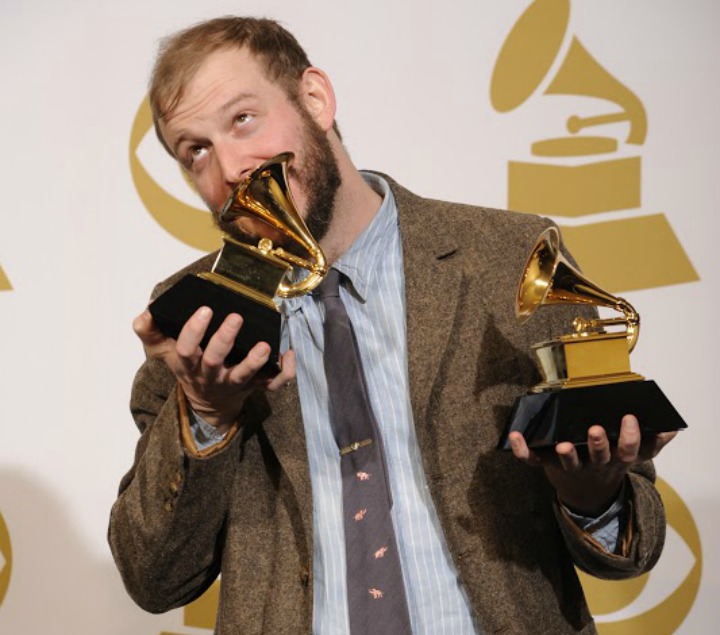 Why jaws dropped:
Over four years after the release of his debut album For Emma, Forever Ago, Bon Iver made national headlines for winning Best New Artist at the 2012 GRAMMYs, triumphing over Skrillex, J. Cole, The Band Perry, and Nicki Minaj, prompting people to spiral into a total freakout.

Unable to pronounce or spell Bon Iver, which translates to "good winter" in French, the term "Bonnie Bear" started circulating online with people tweeting questions like: "Who is Bonnie Bear?" Within minutes, someone had even created a Twitter account under the name @WhoIsBonnieBear for the sole purpose of sharing negative reactions to Bon Iver's win. 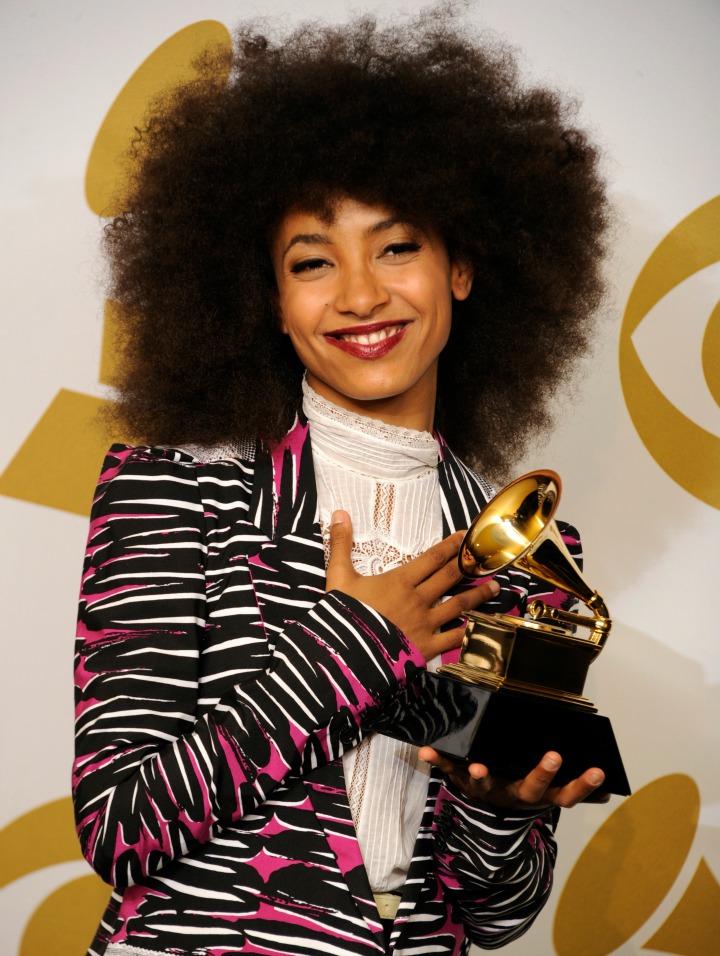 Why jaws dropped:
Bassist and singer Esperanza Spalding has made quite the name for herself in the jazz community with hit tracks like "I Know You Know" and "Black Gold." But when she took the stage to receive the award for Best New Artist in 2011, people everywhere scratched their heads, wondering who she was and how she could possibly have triumphed over Mumford & Sons, Drake, Justin Bieber, and Florence & The Machine.

Little did we know, the Berklee College of Music alum had already wowed audiences at the White House, a Nobel Prize ceremony, and as the opening act at Prince concerts. 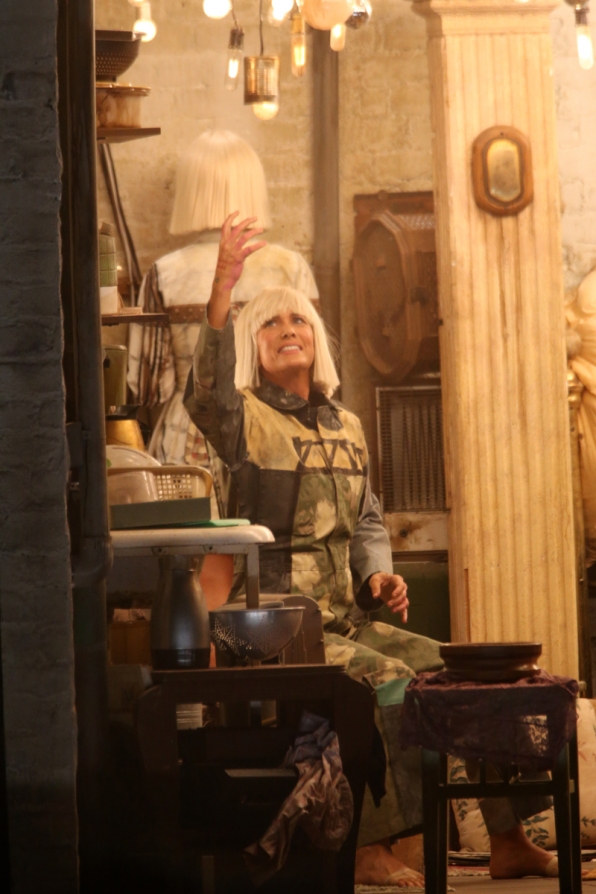 Kristen Wiig did her best Sia impersonation in 2015.

Why jaws dropped:
Hilarious actress Kristen Wiig is no stranger to shock-and-awe. Throughout her career, the star has split our sides with her over-the-top film and TV appearances, reminding us that life's too short to take too yourself too seriously.

At the 2015 GRAMMYs, the funny lady joined Sia on stage for a quirky performance of the GRAMMY-nominated track "Chandelier." Dressed in a skin-tone leotard and iconic blonde bob, Kristen pranced around the stage, lip-syncing and fake-fighting with tiny dancer and music video star Maddie Ziegler. 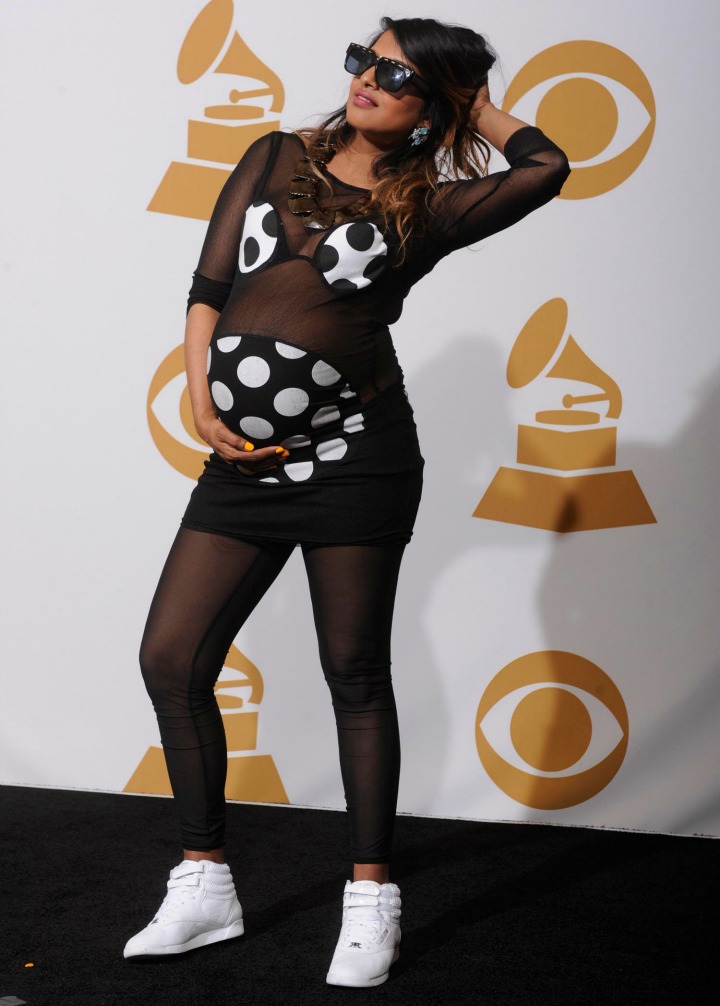 M.I.A. was about to pop during her "Paper Planes" performance.

Why jaws dropped:
Not many women would be able to completely dominate a stage full of rappers while nine-months pregnant, but M.I.A. is no ordinary gal. The English singer, songwriter, rapper, and GRAMMY-nominated artist made her performance of "Paper Planes" with Jay Z, T.I., Lil Wayne, Kanye and, of course, her darling baby bump, look absolutely effortless.

Thanks for setting the bar so high for the rest of us potential mamas, M.I.A.! 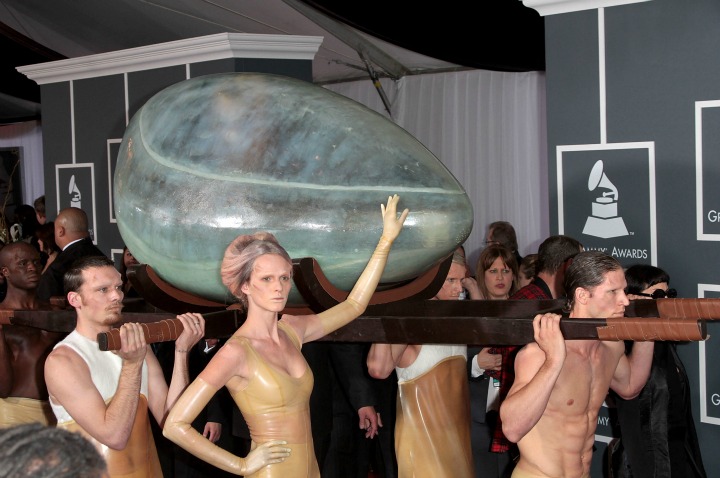 Why jaws dropped:
This red carpet arrival was shocking, even for Mama Monster. With a crew of latex-wearing men and women by her side, Lady Gaga hung out in an egg-shaped vessel until she was later "reborn" on stage during her "Born This Way" performance.

Rumored to have been incubating in the vessel for 72 hours prior to the show, the eccentric artist once again proved that we should always expect the unexpected. 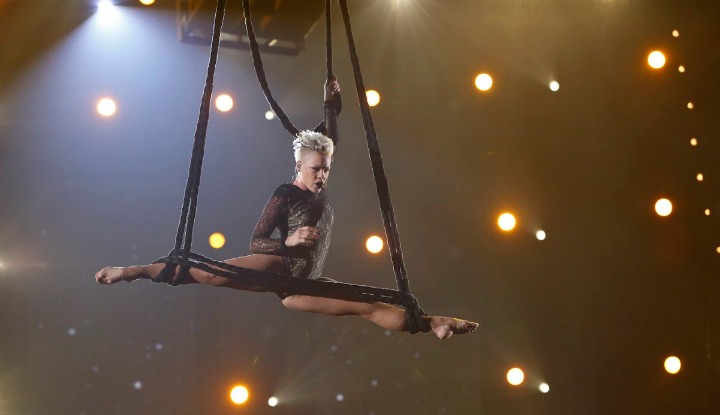 Pink wowed with an acrobatic act during her "Try" performance.

Why jaws dropped:
In 2010, Pink stunned audiences when she twirled from a delicate rope and sang her sweet song "Glitter In The Air." The performance was impressive, demonstrating both her vocal and athletic capabilities, and for years, we thought she'd never be able to top it. Boy, were we wrong.

Four years later, Pink was back on the GRAMMY stage, ready to blow us away. Ditching the light hues, she went straight for a lacy black leotard and ascended into the air on tightly wound black ropes. Twisting and twirling in the air like a trained acrobat, Pink managed to stay perfectly on pitch, saving enough of her breath to land back on the ground and belt out her GRAMMY-nominated duet with fun.'s Nate Ruess. 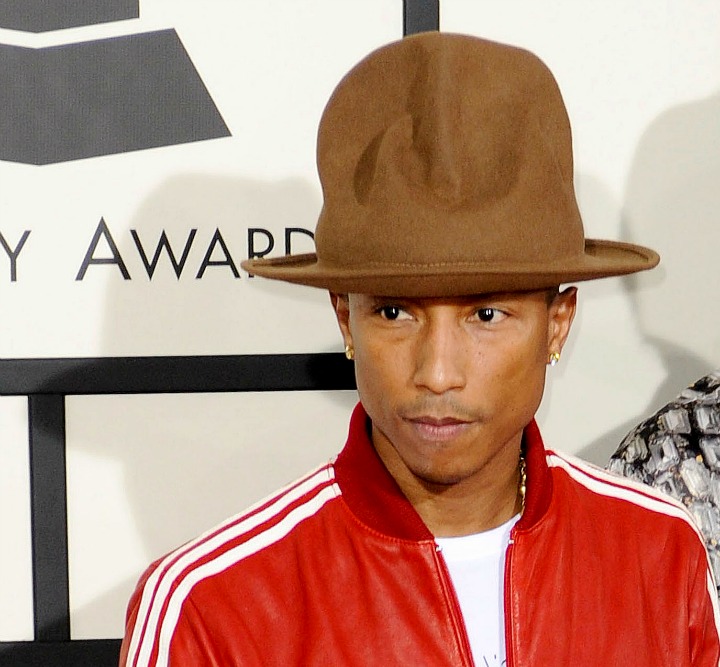 Pharrell's enormous hat was the talk of the town.

Why jaws dropped:
We're used to seeing barely-there costumes, the occasional wardrobe malfunction, and dresses made of meat, but somehow a sky-high hat shocked us all. When singer, songwriter, and producer Pharrell Williams arrived at the 2014 GRAMMYs in his vintage Vivienne Westwood head-topper, people went bananas.

By the end of the night, countless hat memes flooded the internet, and Pharrell's hat had a number of Twitter pages—one even has over 17,000 followers! Trends come and go, but wacky fashion statements are here to stay. 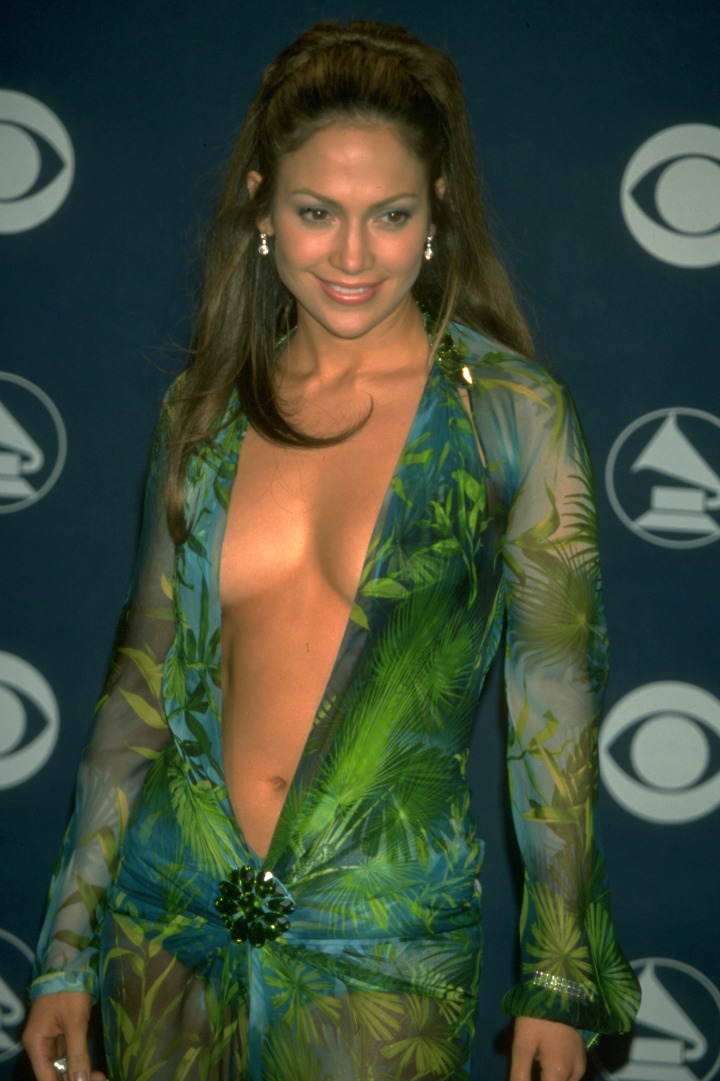 Why jaws dropped:
Back in 2000, showing a little skin was pretty common. But, from your head to your navel? Now, that was something people could hardly believe.

J.Lo's breezy Versace number has gone down in history as one of the most gabbed-about red carpet looks, and we can see why. What we can't quite understand is how she got it to stay put all night! 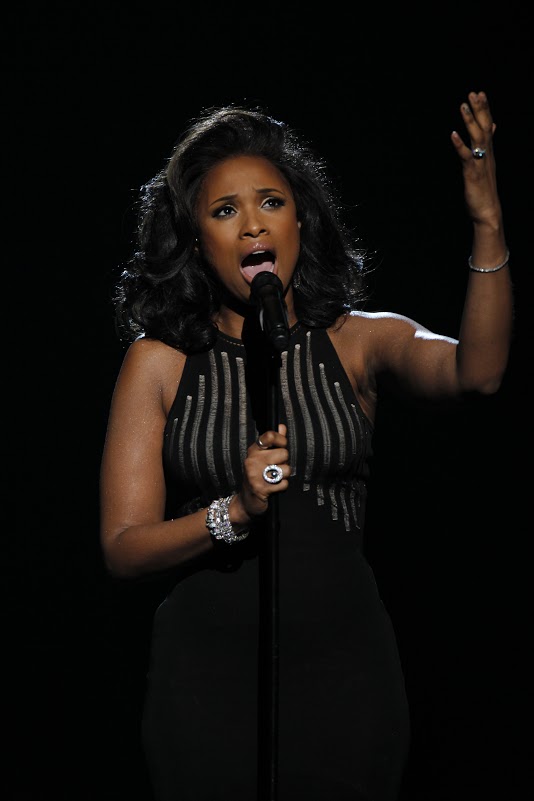 Jennifer Hudson made us tear up with her touching tribute to Whitney Houston.

Why jaws dropped:
A mere 24-hours after Whitney Houston's death, megastar Jennifer Hudson brought the house down with her gorgeous rendition of "I Will Always Love You" at the 54th Annual GRAMMY Awards. With barely any time to rehearse, Jennifer somehow put on one of the most emotional performances of the decade, completely nailing the classic hit, and ending the song with "Whitney, we loved love."

As soon as she hit the final note, the entire audience stood as they applauded and wiped the tears from their eyes.