Nashville knows how to party, and when the city's best and brightest stars win big at the GRAMMYs, it's always a celebration. From unexpected duets to all-star tributes and reunions, here are 10 of the best country music moments from the GRAMMY Awards. Stream the 2017 GRAMMY Awards on-demand. 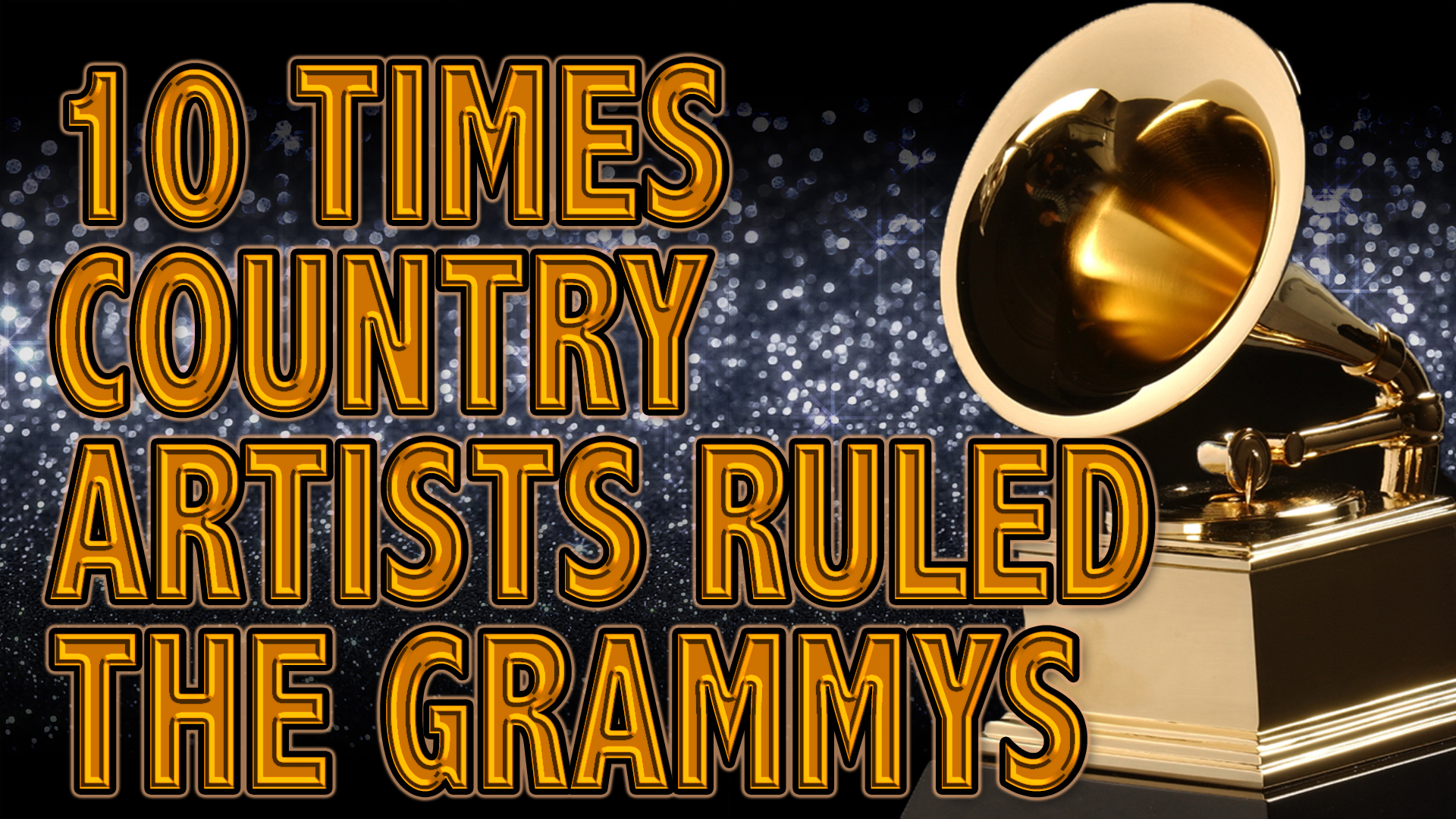 Nashville knows how to party, and when the city's best and brightest stars win big at the GRAMMYs, it's always a celebration.

Over the years, the genre's enjoyed several memorable moments at Music's Biggest Night®, including LeAnn Rimes's historic win in 1997 and Glen Campbell's rhinestone-studded goodbye in 2012. From unexpected duets to all-star tributes and reunions, here are 10 of country music moments from the GRAMMYs that'll cause you to kick up your heels. 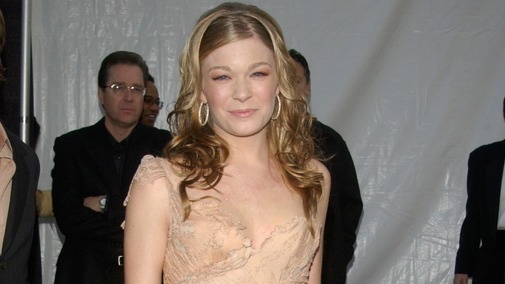 1. When LeAnn Rimes made GRAMMY history at just 14 years old.

In 1997, LeAnn Rimes became the youngest person to win a GRAMMY when she picked up the Best New Artist award, beating out the likes of beloved alt-rock bands like Garbage and No Doubt.

Thanks in part to receiving such a high honor at such a young age and her impressive debut album, Blue, the tween songstress quickly established herself as country's crowned jewel. 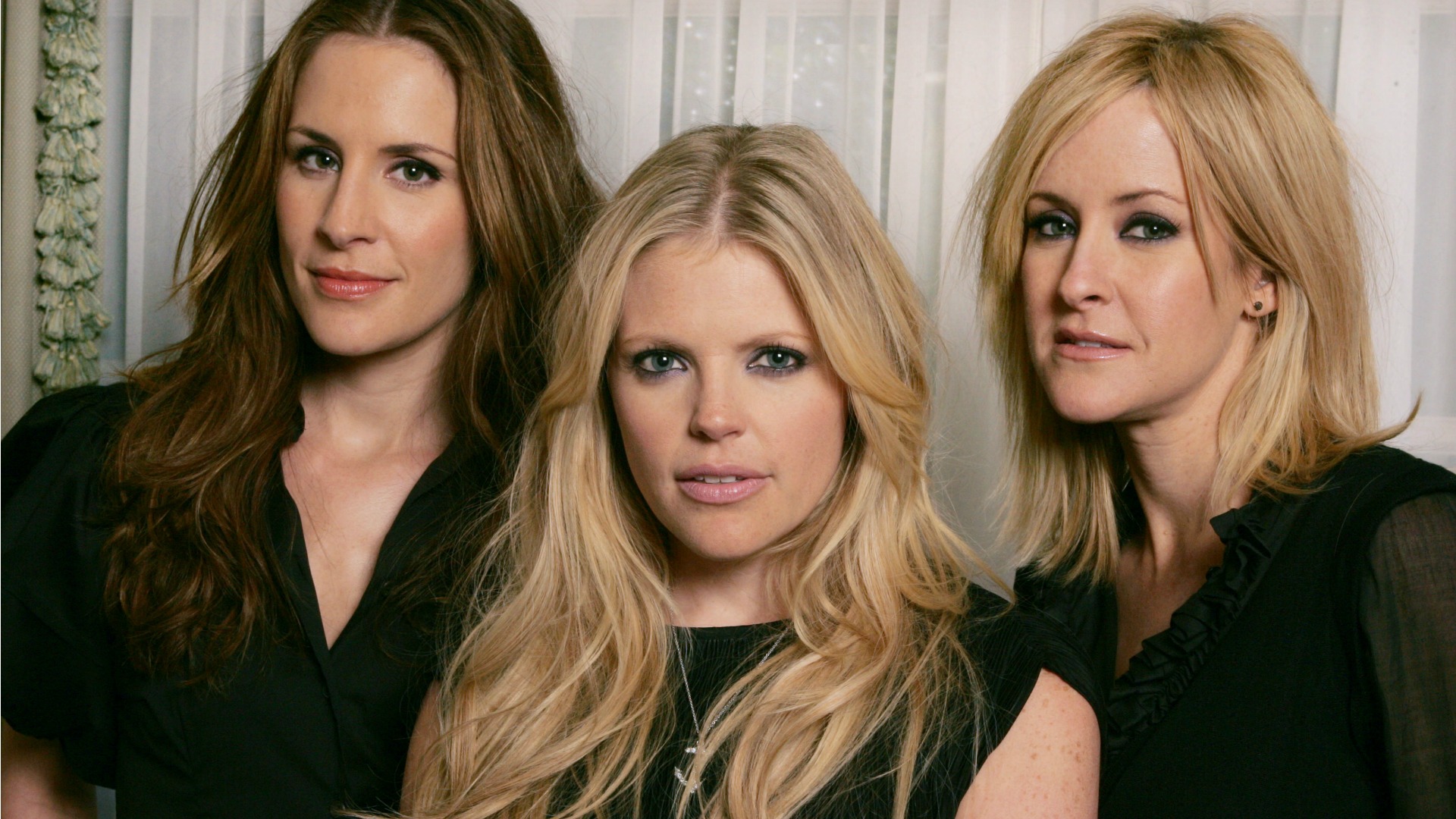 In 2007, The Dixie Chicks swept all five of the GRAMMY categories in which they were nominated, including the big three: Album Of The Year, Record Of The Year, and Song Of The Year.

It was a vindictive moment for the trio, who, four years earlier, sparked a political controversy with some harsh criticism of our then-President, which caused country radio to subsequently excommunicated them.

However, all seemed to be forgiven when the Chicks issued their defiant response at the 2007 GRAMMY Awards when they performed the aptly-titled "Not Ready To Make Nice," off their 2006 album Taking The Long Way. 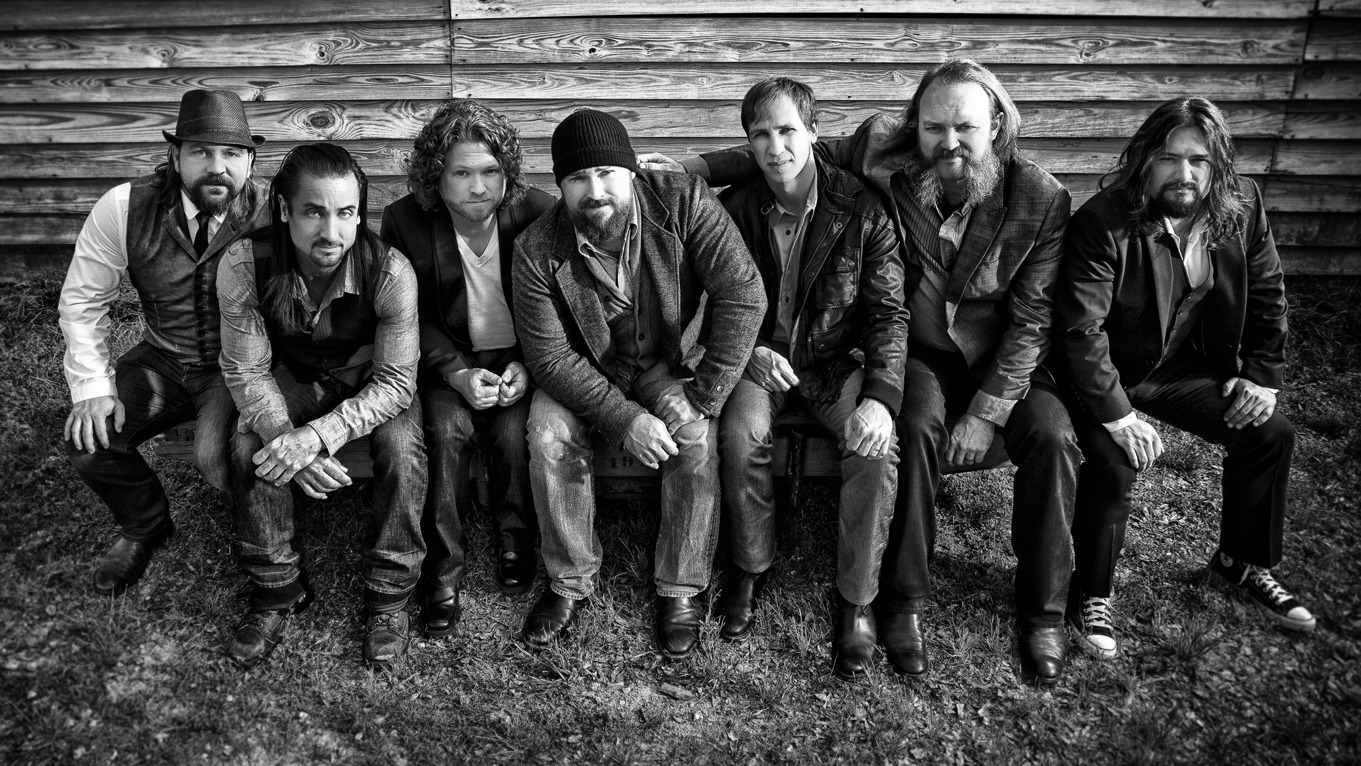 Not only did Zac Brown Band win Best New Artist at the 2010 GRAMMY Awards, but they were also bestowed the honor of performing "America The Beautiful" before being joined by living legend Leon Russell, who pounded away on the piano as Brown & Co. tore through their hit song "Chicken Fried."

Images of cold beer mugs and American flags flashed on the screen behind them, enhancing one of the most patriotic performances to ever the hit the GRAMMY stage. 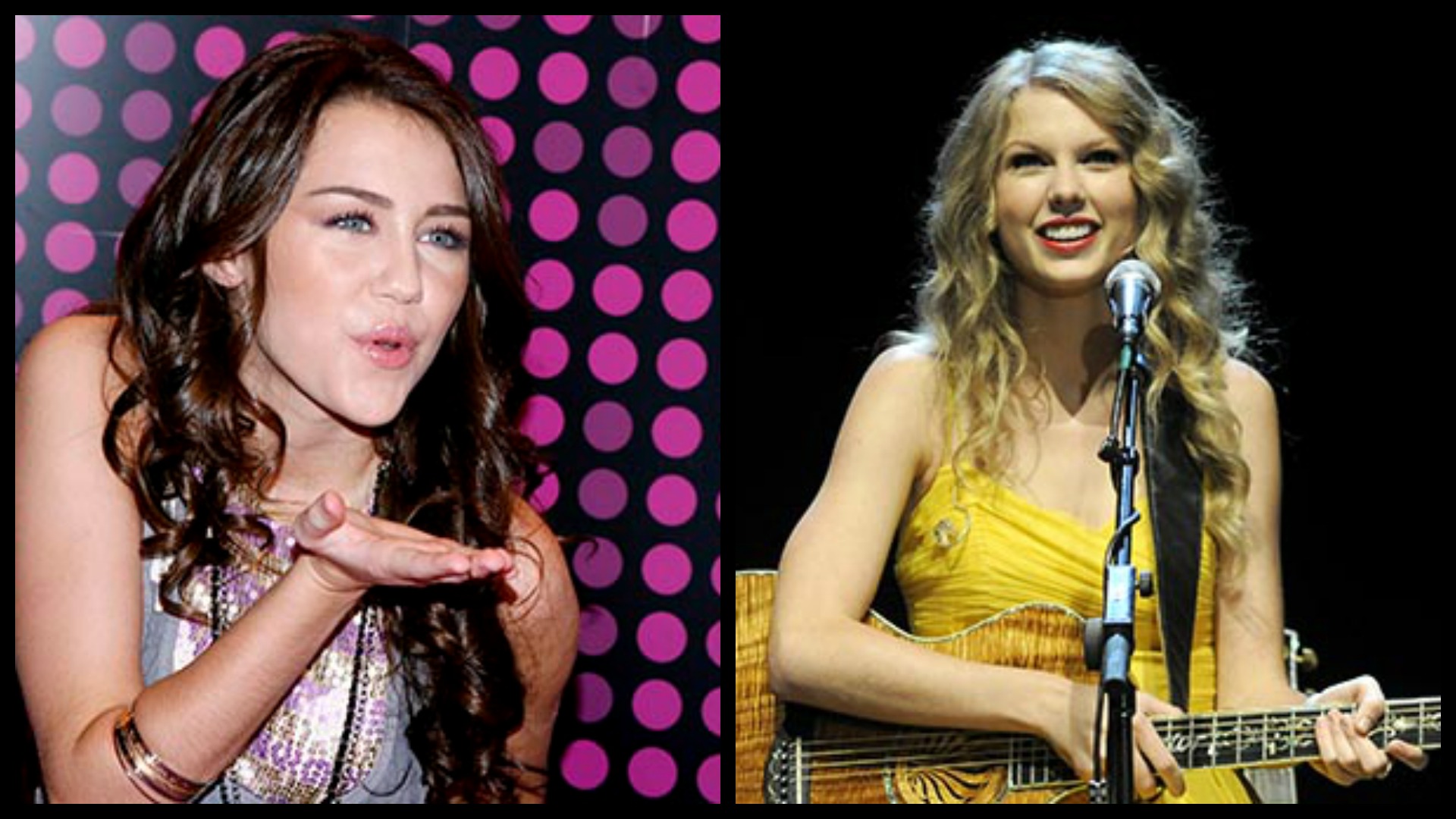 4. When Taylor Swift and Miley Cyrus did one for the teens.

Nashville darling Taylor Swift made her debut GRAMMY performance in 2009 alongside Miley Cyrus, who, at the time, was primarily known for her family friendly show on the Disney Channel.

The fresh-faced songbirds teamed up for an acoustic rendition of Swift's hit "Fifteen," singing sweetly about the anxieties and dreams that come along with adolescence.

Of course, both women went on to become superstars in their own right, but, for one night in 2009, they were the picture of youth and innocence for GRAMMY viewers. 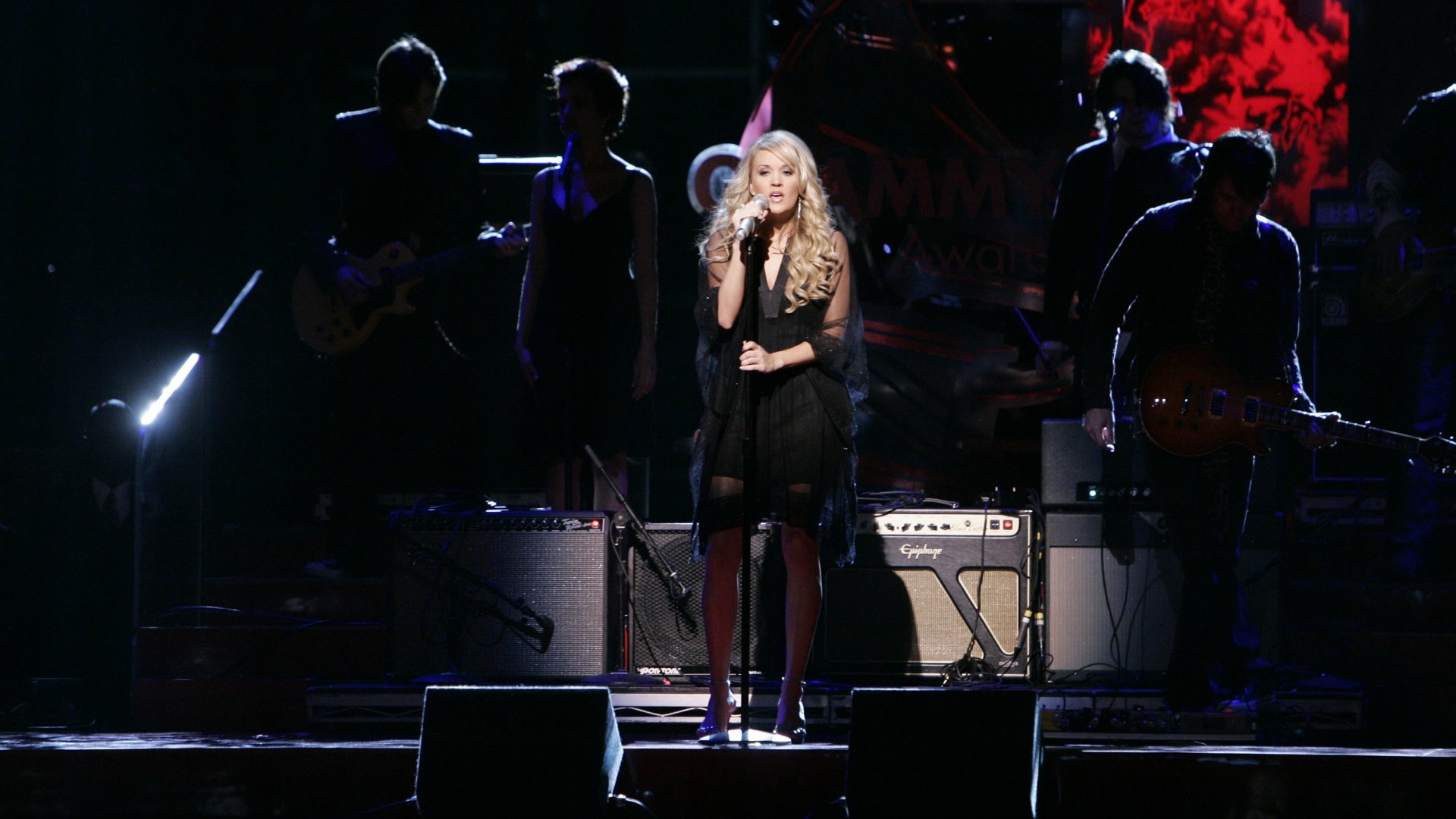 Carrie Underwood proved the critics wrong when she scooped up the Best New Artist GRAMMY Award in 2007.

At the time, she was only the second country artist to win the award (following LeAnn Rimes in 1997), and edged out a strong field of nominees that included Chris Brown, James Blunt, Imogen Heap, and Corrine Bailey Rae.

The same year, Underwood also won the Best Female Country Vocal Performance award for "Jesus, Take The Wheel," and went on to become one of the few Idol winners to have sustainable success in the music industry. 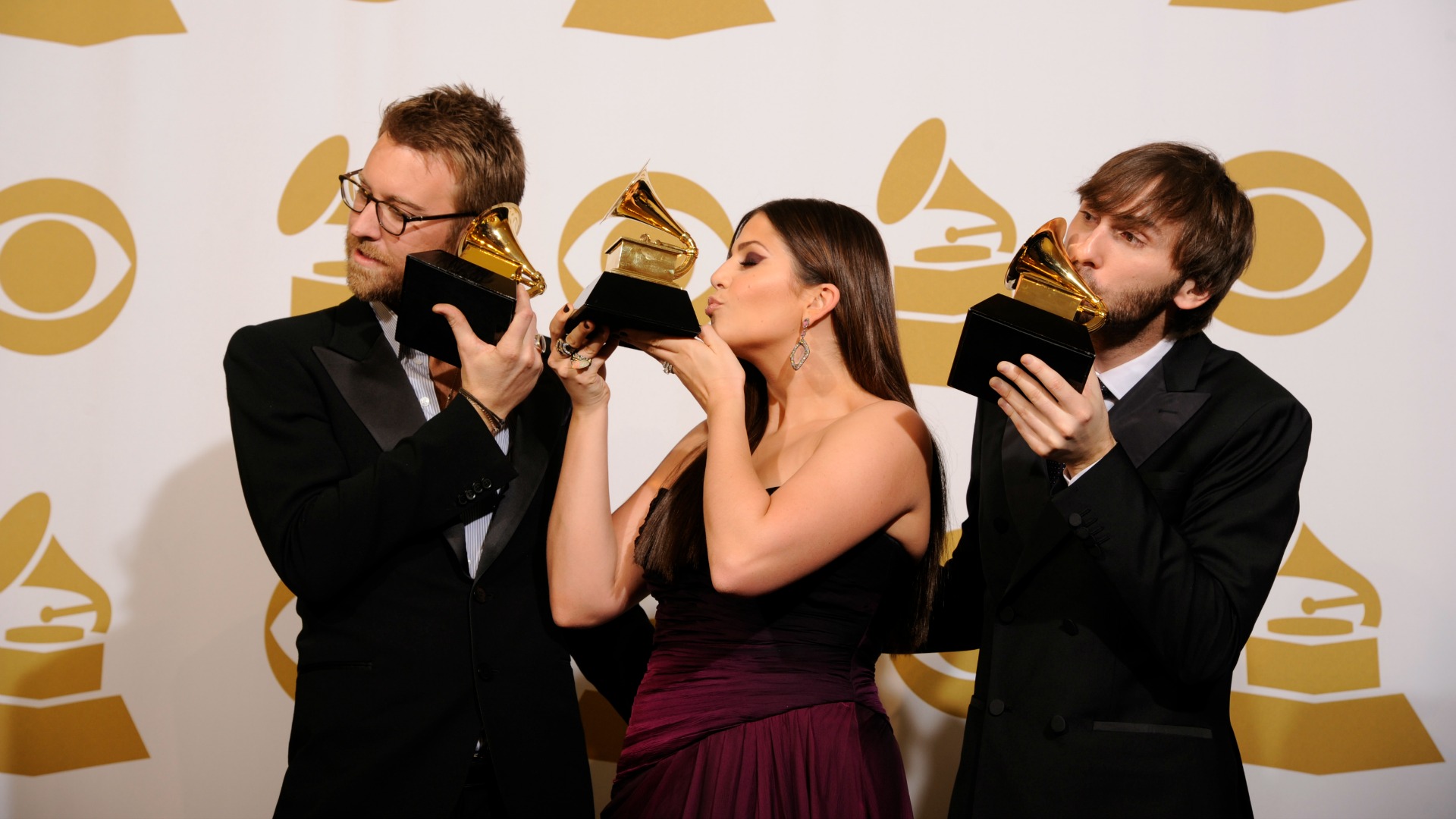 6. When Lady Antebellum capped off an incredible breakout year.

Lady Antebellum gave country a huge moment in the spotlight at the 2011 GRAMMY Awards when they scooped up five awards, including Record Of The Year and Song Of The Year.

Those two wins recognized their smash hit "Need You Now," which was pleading call for late-night companionship and was performed live by the country-pop trio on the GRAMMY stage that night.

With five golden gramophones under their leather belts, the band was poised for a breakout year, which helped usher in their next album, 2011's Own The Night, which debuted at the top of the Billboard 200. 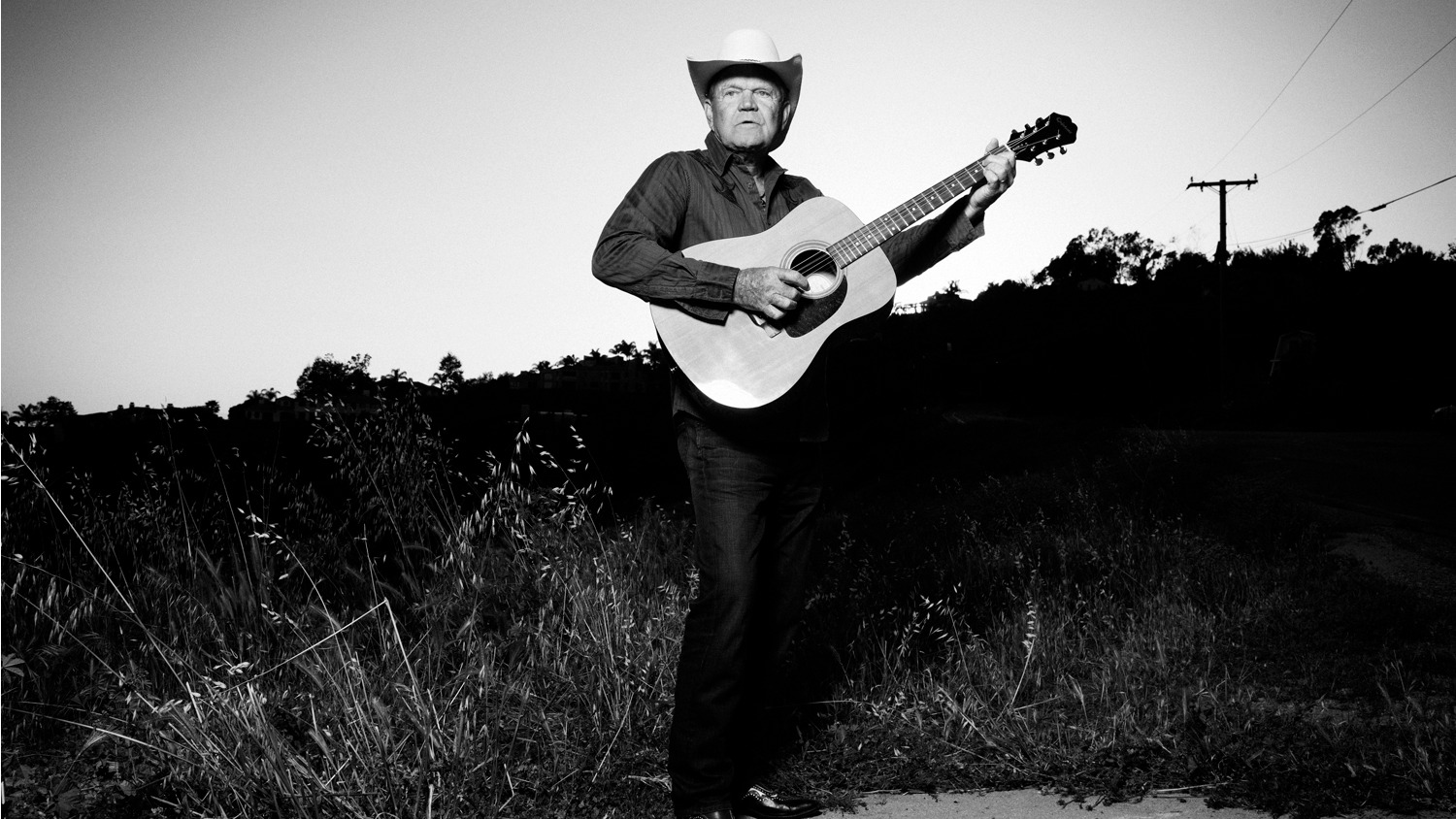 7. When Glen Campbell got a fitting tribute.

In 2012, country great Glen Campbell was 75 years old and had been diagnosed with Alzheimer's the year prior.

He was on a "goodbye tour" of sorts, and decided to give one of his finest farewell performances at the GRAMMY Awards, thanks to a little help from Blake Shelton and The Band Perry.

Sporting a white sequined jacket and touting a whole lotta energy, Campbell got the crowd on its feet with his biggest hit, "Rhinestone Cowboy," which was a fitting way to bid adieu to the country singer/songwriter. 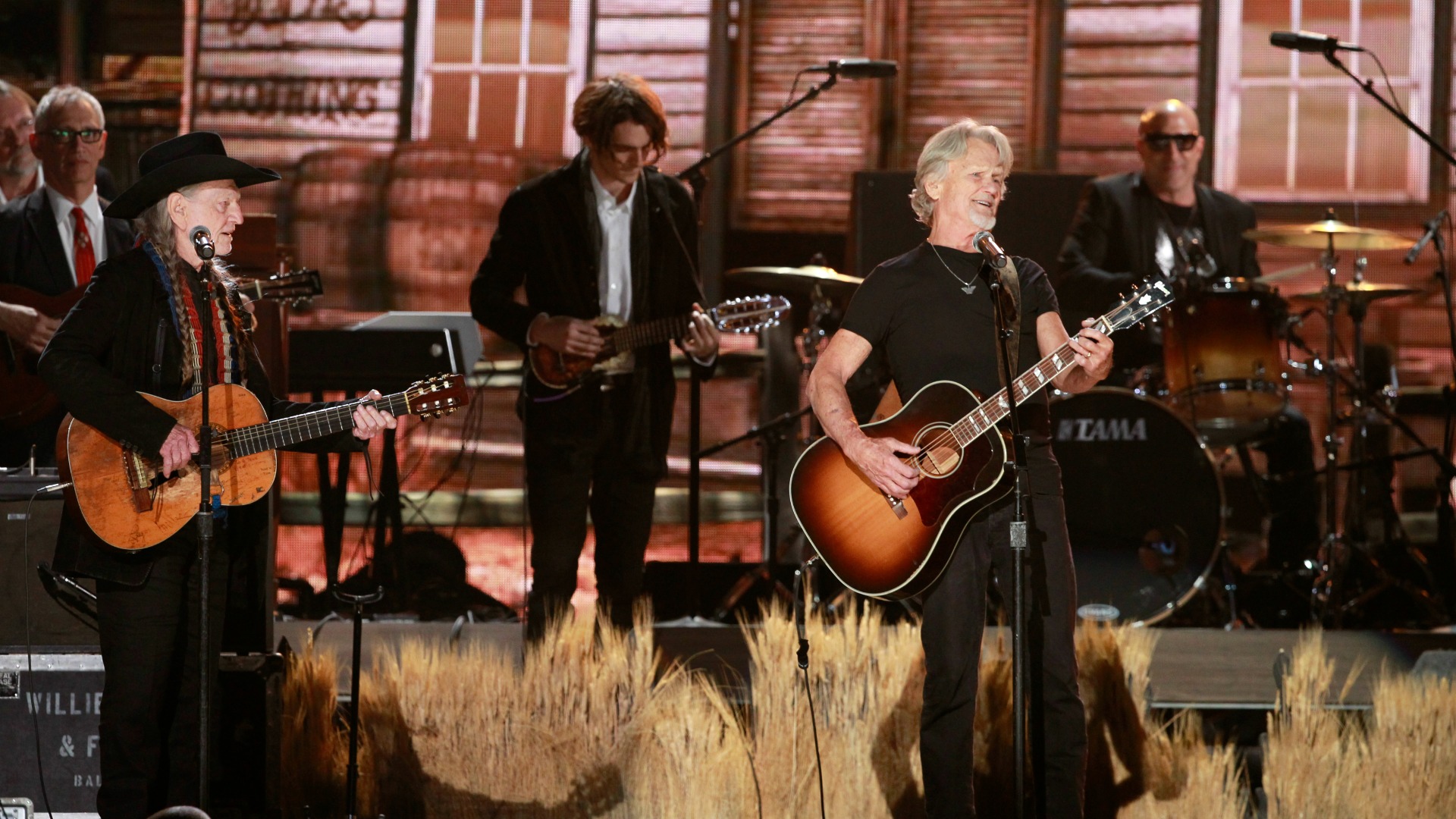 8. When The Highwaymen reunited.

The year 1984 was an exciting one for country music, as four of the genre's pioneering musicians—Willie Nelson, Johnny Cash, Waylon Jennings, and Kris Kristofferson—came together to form a supergroup called The Highwaymen.

Twenty years later, the two surviving members of the group, Nelson and Kristofferson, reunited for a special and spirited performance at the 2014 GRAMMY Awards.

The reunion opened with Nelson and Kristofferson singing the group's hit "Highwayman," before Merle Haggard and Blake Shelton joined them for Haggard's "Okie From Muskogee" and Nelson's "Mamas Don't Let Your Babies Grow Up To Be Cowboys." 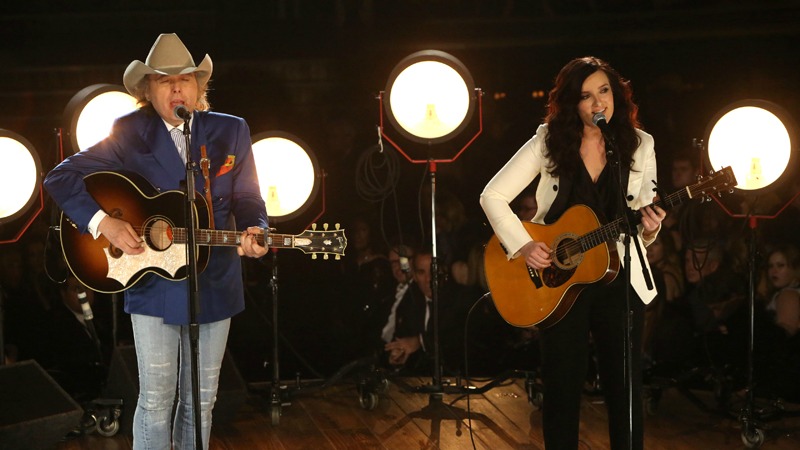 9. When Brandy Clark and Dwight Yoakam's duet stole the show.

During an evening that featured AC/DC's pyrotechnic-heavy opener and a burlesque-themed set from Madonna, Brandy Clark and Dwight Yoakam's duet was one of the quietest, but most moving performances of the 2015 GRAMMY Awards.

The country newcomer and the Stetson-wearing veteran teamed up for a gorgeous rendition of "Hold My Hand," a tender love tune from Clark's breakthrough album, 12 Stories. 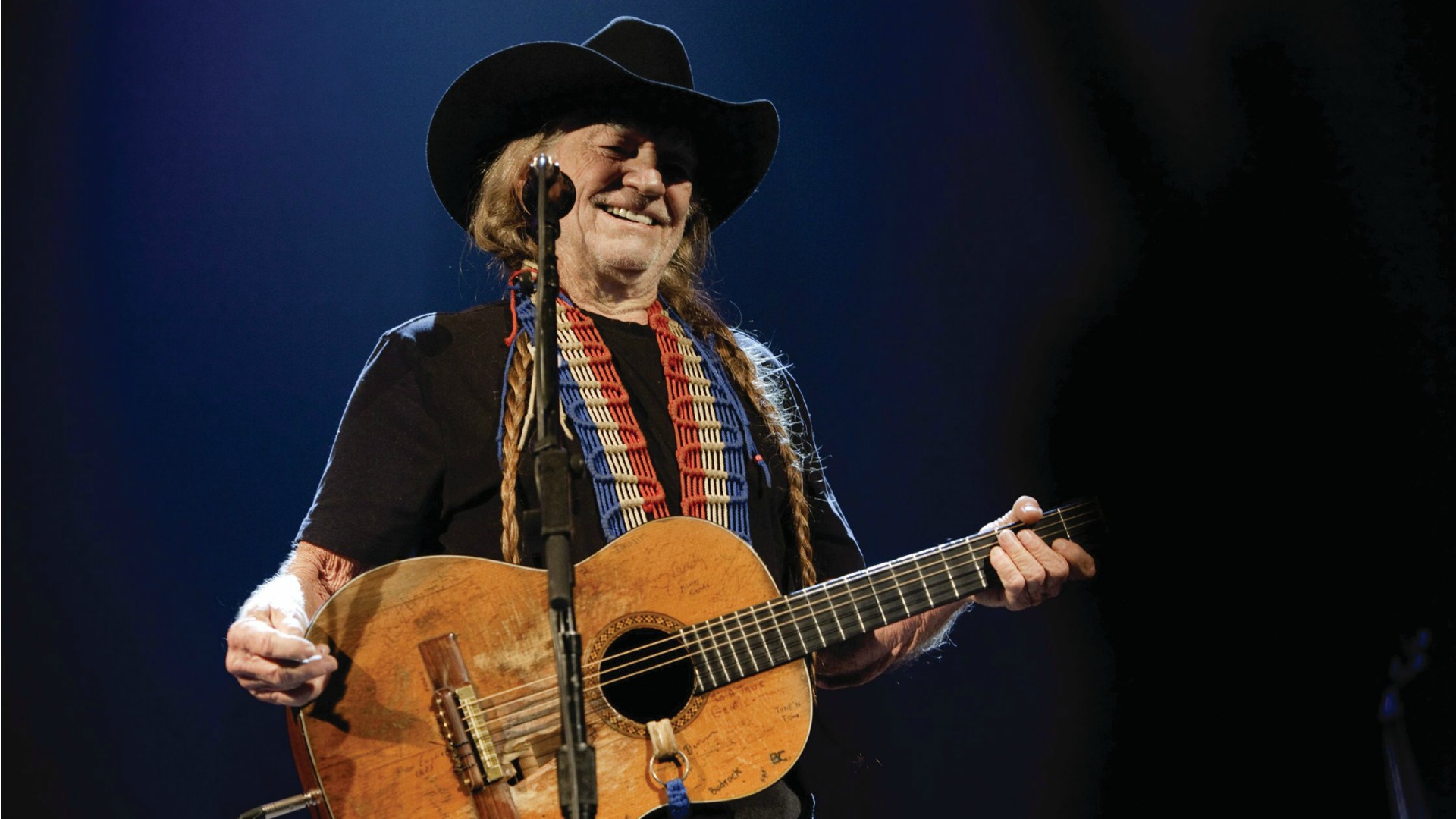 In 1990, Willie Nelson was among the first class of recipients for the GRAMMY Legend Award, which recognizes artists' "ongoing contributions and influence" in music.

In the case of Nelson, the 11-time GRAMMY winner continues to prove worthy of the prestigious prize by touring tirelessly and releasing new projects regularly.

In fact, the iconic Texan is up for one award in 2017—Best Traditional Pop Vocal Album for Summertime: Willie Nelson Sings Gershwin—and recently announced his next album of original work, God's Problem Child, is set to drop in April.

To date, Johnny Cash is the only other country artist to have received the GRAMMY Legend Award.