What Are Critics Saying About The Late Late Show With James Corden?: Late night television has a lot to look forward to.

Late night television has a lot to look forward to this week. James Corden will take his permanent seat at the The Late Late Show desk beginning tonight. If these reviews don't convince you that this is a show you need to be watching, we aren't sure what will.

On what inspired him to do the show:
“They are not my influences. I’m fans of all of them and there are times when I’ve lived in New York where I’m doing plays I’ve always, always enjoyed watching them, but it is not a thing that we have at home. But maybe that can be refreshing.”

On his appeal of doing the show:
“My favourite thing that I’ve ever done, and the thing that made me want to do this ultimately, was that I’ve been happiest in my career when I’ve been in plays, because I love a day with a focus.”

Variety’s Seth Kelley suggested that The Good Wife’s PaleyFest panel “served as as a warm-up for Corden’s project.”

“If PaleyFest’s ‘The Good Wife’ panel on Saturday night at the Dolby Theatre is any indicator of James Corden’s latenight hosting potential, the future looks funny.”

"There’s no question Corden has talent to spare: He can sing. He can dance. And he’s got an infectious laugh that makes it impossible not to smile in his presence.”

“In many ways, Corden must feel like a bit of an alien being dropped into Hollywood. During the morning our interview took place, his gigantic billboard was raised over CBS studios at rush hour. He stood on a crane with a bullhorn shouting down at pedestrians, ‘Hi. I am James Corden.’” 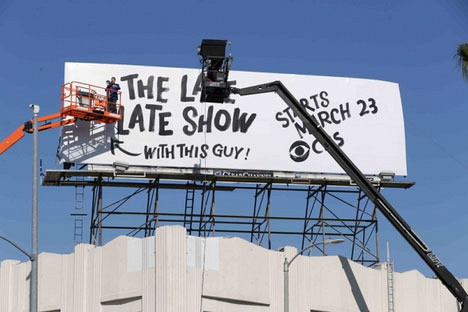 “Corden exuded confidence handling the substantial crowd at the Dolby Theater. When someone in the audience asked Margulies if she was ever going to get laid on the show, Corden shot back, ‘Said like a true Australian man!’”