James Corden couldn't stand another face besides his own on CBS Television City Studios.
A billboard of James Corden's face had been on the front of CBS Television City's largest studio since he arrived last year to shoot The Late Late Show. Recently, CBS decided to go a different direction with the billboard and promote their new show, Bull, which features former NCIS star, Michael Weatherly. Apparently, James just couldn't stand Michael's face smirking down at him every day, so he decided to take matters into his own hands. He and one of his writers, Nate Fernald, rappelled down the building to spray graffiti all over the Bull billboard (Bullboard?). Watch below:


However, when James had Michael on his show this Monday, Michael and his children got even by adding their own artwork to one of James' posters. 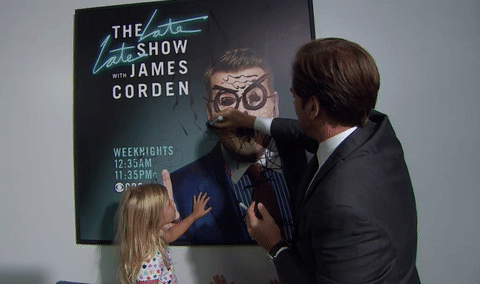