You didn't have to grow up in the '80s to be familiar with Magnum P.I.

The iconic CBS drama was a feel-good adventure that pop-culture junkies of every age can appreciate. But for everything there is a season, and the same is true of the brand-new Magnum P.I., which Executive Producer Peter Lenkov is bringing to CBS and CBS All Access come Monday, Sept. 24 at 9/8c.

Back To The Drawing Board

"This has been my white whale since I was about 14 years old," began Lenkov. "When I was a kid, I used to draw Magnum, P.I. cartoons. [And] I’m finally getting to do it with a great cast.”

Commenting on the way he hopes to update the series, Lenkov continued: “We’re trying to introduce the show to a new audience. I have four kids, and they don’t know anything about the old Magnum. But they thought [the pilot] was really cool. The spirit of the show still exists, but we’re just updating it.”

For a new era, Lenkov was especially eager to imbue a bit of girl power in the cast. Enter: Perdita Weeks as Juliet Higgins.

"This Higgins is a 2018 Higgins,” said Weeks. “That’s the only thing that’s really missing from the original—a strong, female character. It brings a new dynamic… There’s a little will-they-won’t-they.” 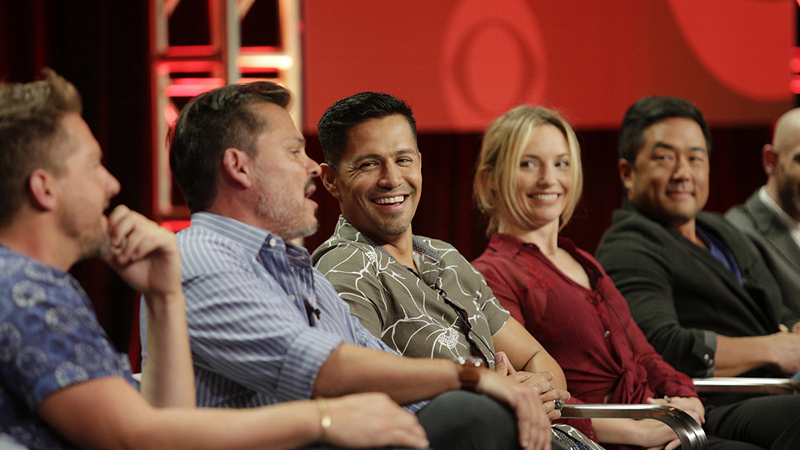 Look Out For Exploding Ferraris

Though Lenkov promised that the new Magnum is not a straight-up action show, there are still a lot of exploding Ferraris. Sounds expensive!

"It is a little sad to watch a Ferrari blow up,” said Hernandez. “But to drive them… it’s so much fun! They’re so powerful, and there’s also that mystique surrounding the red Ferrari.”

Hernandez went on to point out how Ferraris may have enjoyed increased popularity in the ‘80s because of their placement on the original Magnum. “People of a certain age find that to be the height of the ‘80s. The red Ferrari is a big thing, and I feel like without Magnum, P.I., Ferraris wouldn’t be a thing.”

The one thing Lenkov especially hopes to achieve with the new Magnum is a positive portrayal of Army veteran brotherhood.

"The original Magnum was about Vietnam vets returning home,” he reflected. “But they weren’t all perceived as heroes. Any movie that portrays a Vietnam vet was really dark. But [the original] Magnum was a really positive portrayal. [And] If there was ever a time to bring Magnum back, it’s now. We need positive portrayals of vets coming back home and making positive contributions.”