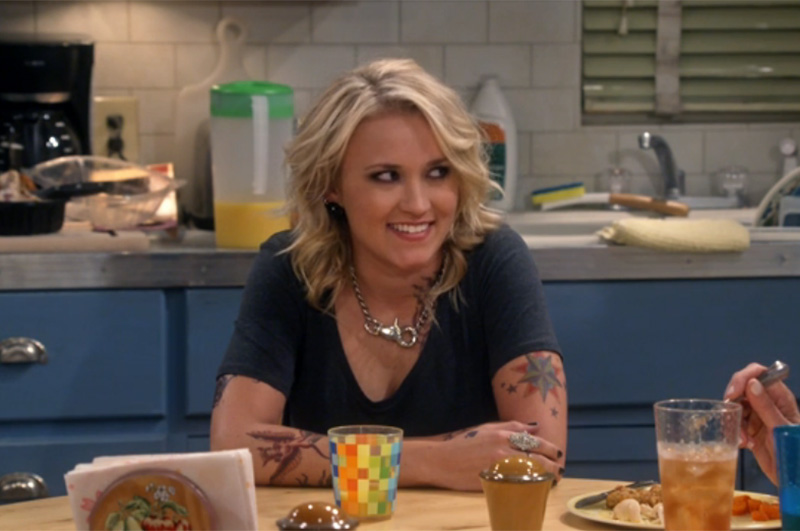 Actress Emily Osment opens up about her moving turn on Mom and how it fits into her acting career.

The young and talented Emily Osment, who first appeared on the last episode of Mom as Jodi, a teenage drug addict who Bonnie and Christy take under their wing, is nothing but overjoyed to be part of the series' team of strong women.

Though Emily's resume of TV work has leaned towards more youthful and bubbly characters—like Lilly Truscott on Hannah Montana, Gerti Giggles on Spy Kids 3-D: Game Over, and Gabi Diamond on Young & Hungry—walking in the shoes of a more complicated and dramatic teen on Mom has taught her a lot about herself and the craft she adores.

Hear what Emily had to say about Allison Janney and Anna Faris' secret on-set language, what she means by saying the sitcom is a "quieter funny," and what advice she wants every young actor to take. 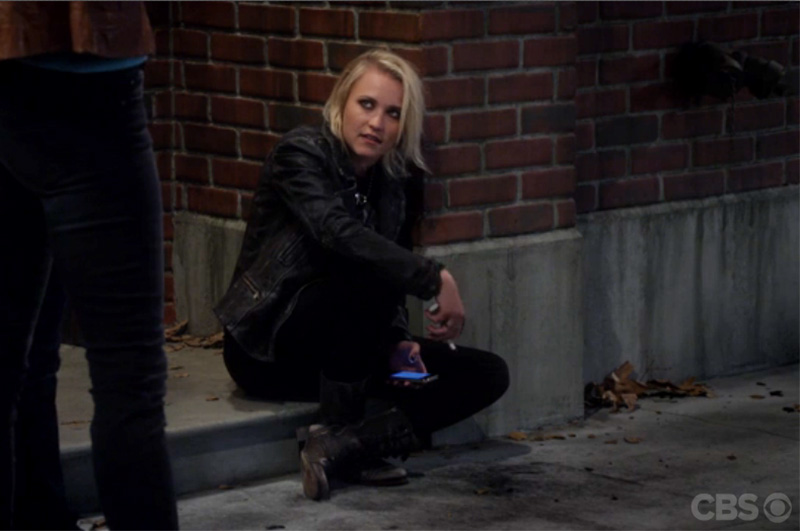 1. What attracted you to the role of Jodi, a character who appears to be a departure from past roles?

Emily: "I don’t even know where to begin. I think every actor can agree that when you’ve been playing a certain character for awhile—no matter what that role is—it’s always attractive to try something that's different. I’ve always loved dramatic roles and this was a unique experience because it was a very, very dramatic role in a four-camera sitcom setting.

Chuck Lorre and everyone else on Mom did such a great job of balancing that line that rides tragedy and comedy. They make you cry and then they make you crack up about it. It’s just been so incredible. I have worked with Chuck in the past and it’s been kind of a dream to get called back in for this. And I’m surprised every week when they say they want to have me back." 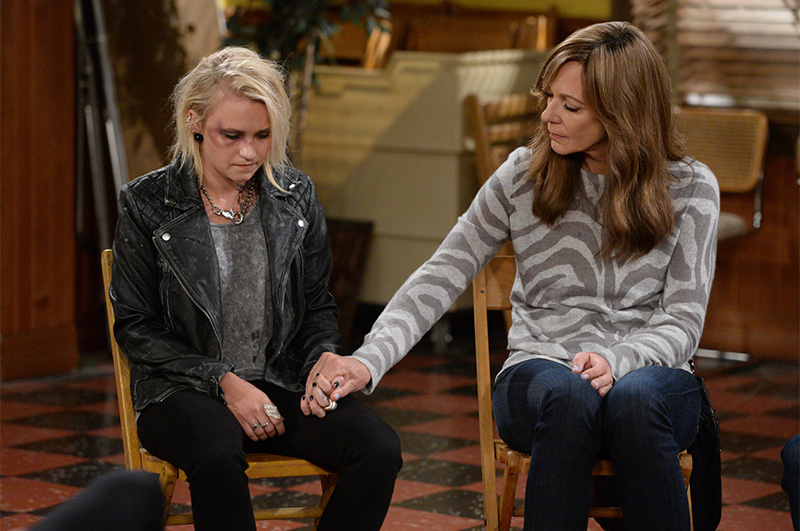 2. How did you prepare to play such a raw, stripped-down character?

Emily: "When I first auditioned for the role, the only information I really got was that [Jodi] was a recovering meth addict. I did watch quite a few documentaries for the body language and the characteristics of someone that’s either on meth currently—which I am on [meth in] the first scene of the first episode—and then when they’re recovering and coming down.

You just learn a lot about what that stuff can do to your body, especially when you’re trying to get off it. And all of that was played out in the episode. Everything that was written was very true." 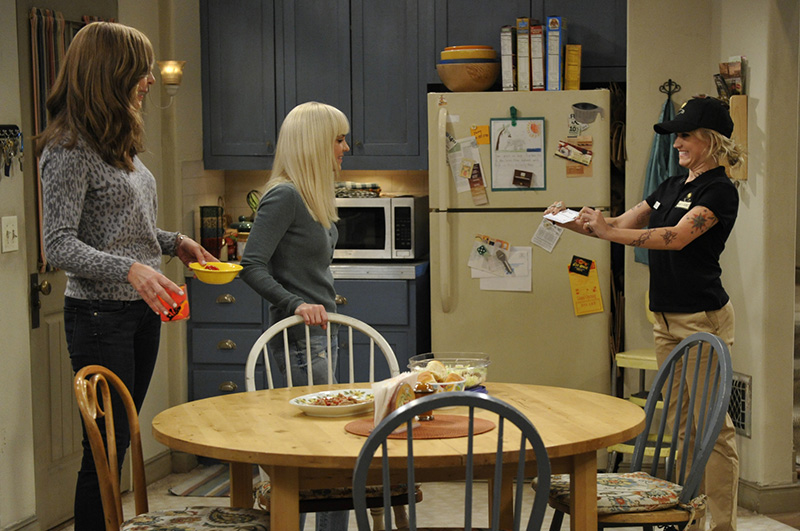 3. How do you think Mom is able to balance out their dichotomy of comedy and tragedy so seamlessly?

Emily: "[Mom] does really mirror real life. Things are tragic and sometimes you find a way to laugh about it.

The writing is so brilliant on this show and everybody on the cast is such a team. It’s refreshing to work with actors that truly invest in each other. I mean, comedy is all about your relationship with someone else, and the timing and the delivery.

These women just love each other and are so gracious with the way they are on stage. They’re just very giving as actors—and that’s so, so gratifying to work with." 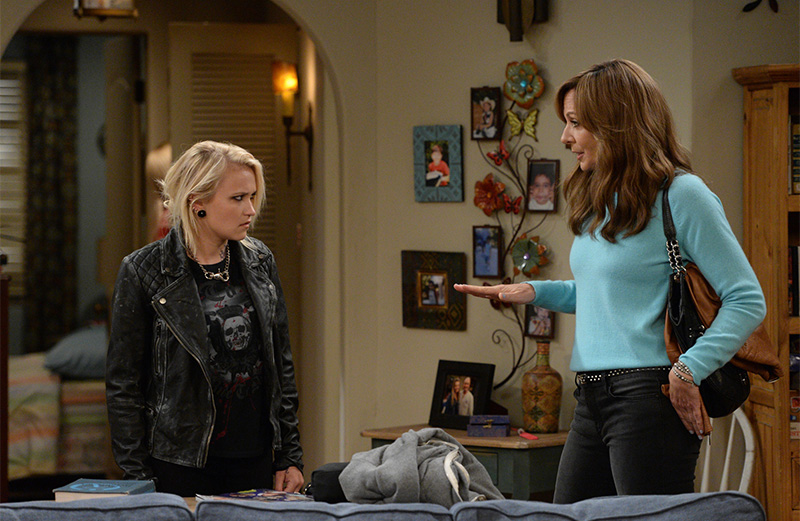 4. What was it like being part of a show that's known for its cast of strong female characters?

Emily: "I get butterflies every time I walk on set. It’s been such a dream and such a lesson on comedy, because I’ve done comedy in the past—and usually I do comedic roles—[but] this one was so different.

It’s been such an amazing learning experience standing there watching Allison Janney just be so open, vulnerable, funny, and loving. And Anna Faris is so sweet. It really has been so incredible. It is very refreshing to be around [them]. I grew up around strong women and I love working with strong women. I think we need more of them, always." 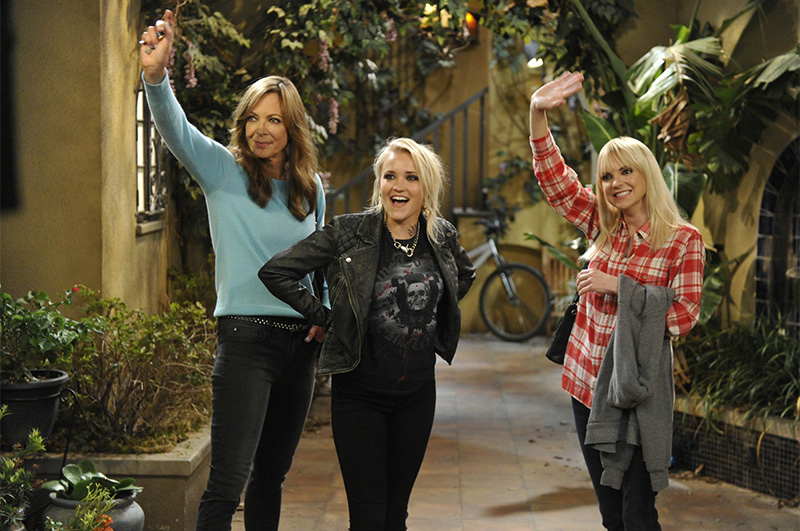 5. What was it like working with Allison Janney and Anna Faris?

And, honestly, it’s taught me so much about comedy, ‘cause on Young & Hungry—the other show I’m going back to after Mom—the comedy’s much quicker and more vibrant. It’s a louder kind of comedy, and [Mom] is a more subtle kind of comedy with lots of intention behind it. It’s just so cool...to sit there and learn every day." 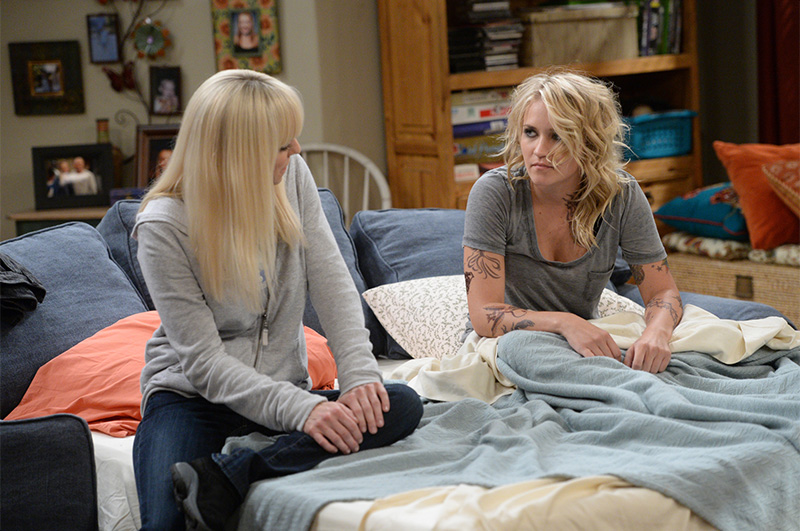 6. What's the transition been like to go from child star to adult actress?

Emily: "I don't think there necessarily was a transition. I didn't really feel that at all. I've been very fortunate to keep working throughout all my awkward, weird teenager years and when I was in college. Then pilot season brought me out of college and I started working on Young & Hungry. It just sort of flowed.

I haven't really thought about it as a transition; I've just been thinking about it as my career." 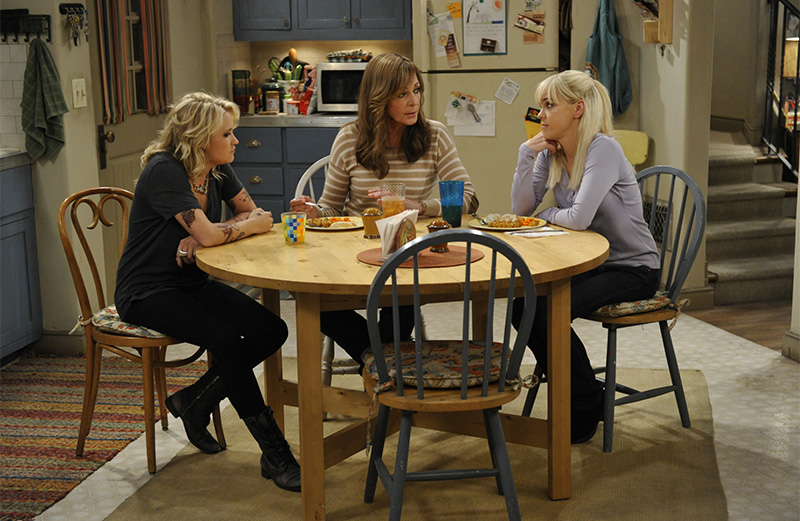 7. How is your music career going?

Emily: "I write a lot of music for artists and I'm working on something right now. It's terrifying because it's a complete and utter display of all your innards when you write a song. It can be really scary and it's a little tumultuous for me with work and for personal reasons.

I've found myself writing a lot recently and it's such a good release. Music takes a lot of time but I love it, and it's not something where I'm writing to hope it does well. I'm just writing to hope that I can maybe go back out on tour one day. 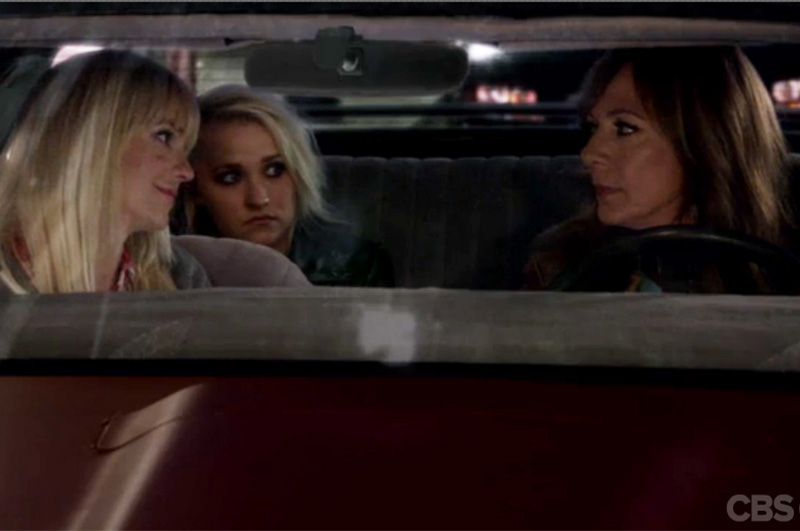 8. Do you have any advice for young actors looking to break into the industry?

Emily: "The best thing you can do is keep working and reading. That's one thing that I've realized this past couple of years. I always have a book with me.

Acting is so cool. It's what I want to do forever. I just find it so incredibly interesting. That's the thing—if you love something and find it interesting, there's no reason to ever stop trying to get to the place that you want to be.

I'm working real, real hard to just keep working all the time on that dream. You never want to have any off days, until Christmas and maybe Thanksgiving." 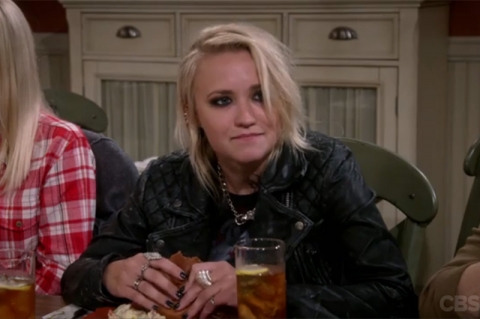 9. What can your fans expect from you next?

Emily: "I have no idea. That's kind of the beauty of living life as an actor. You have absolutely no idea where you're going to be in a few months. It's terrifying but it's also really great.

This role on Mom was so unexpected and I knew that I was going back to my role on Young & Hungry at the end of the year, so I wasn't sure how that was going to work out. It's been so cool for me to be able to fit this in in between [Young & Hungry's] Season 2 and Season 3. We just got picked up for 20 episodes, so we're in it for the long haul!

I'm still working on Family Guy and I have Love Is All You Need, which is a film I did last year that I'm totally in love with, so hopefully that's coming out soon."

Watch Emily make her second appearance on Mom on Nov. 19 at 9/8c, and catch all-new episodes of Mom every Thursday at 9/8c.