Use the form below to send us your comments. If you are experiencing problems, please describe them.
Player Help | All Access Help
S1 E6 22min  TV-G
Magoo is handing out food to the local neighborhood animals when he stumbles on a gigantic, horrific hamster that Fizz has released from some parallel dimension. Magoo thinks it's some poor, homeless dog with difficulties eating. / Magoo can't find the book that Linda lent him and he's ready to turn the house upside down to find it. The problem is that he is not in his house but in Fizz's loft. He makes such a ruckus that the hamster starts believing he's got a ghost in the house. / Air Date: Jan 6, 2018
Now Streaming 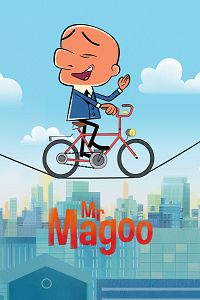 Subscribe
S1 E1 They Are Among US / Pinkbeard's Treasure / A Mountaineer Like No Other
Busy observing the sky in search of UFOS, Magoo accidentally finds himself wandering over to Fizz's house. Thinking that the hamster is none other than an E.T., with plans to destroy earth, Magoo decides to save the planet. / Magoo, hunting for Pinkbeard's treasure, mistakes the park for an island. Fizz and Weasel are there, selling ice cream that never falls on the ground. Magoo messes up their plans, confusing Weasel for Pinkbeard and the icebox for treasure. / Magoo has decided to go mountain climbing but in reality, he is climbing up a skyscraper! He mixes Fizz up with a wounded bird and ruins his plan: make everyone think that he is a superhero by saving Weasel, who is about to "fall out of the building".
Jan 01, 2018 22 min TV-G

Subscribe
S1 E2 Wallpapering Magoo / Lend Me Your Earpiece / Honey Bear
Magoo thinks that he is peeling off old wallpaper on Linda's walls, but he is actually destroying Fizz' hypnotic posters In order to get rid of his arch-enemy, Fizz hypnotizes Mr. Cat who suddenly, turns against his master. / Magoo finds himself shrunk and then dragged inside the President's head, along with Fizz. He thinks the hamster is a little, lost boy and decides to help him find his way home, preventing him from taking control of the President's brain. / Magoo thinks that he is on a camping trip but he is actually just in the city park. When he sees Weasel wearing a suit that allows him to stock a very special honey gathered by Fizz, he thinks he's a wounded bear and decides to help him...
Jan 02, 2018 22 min TV-G

Subscribe
S1 E3 Halloween Hold-up / Firefighter for a Day / Legs of Steel
Magoo is thinks is out trick-or-treating for Halloween. But he unwittingly robs a bank instead of Weasel. Fizz, whose plan was to heroically arrest the "pseudo" burglar, rushes over to Magoo's house to grab the money and take our little man off to jail. / Magoo is a part-time firefighter reservist whose rescue mission for the day is to save a cat in a tree. In reality, the cat is none other than Fizz, who is systematically incapable of activating his new "Fizzsounds" machine. / Thinking he is in the middle of a work-out at his local gym, Magoo inadvertently climbs onto a delivery boy's bicycle. It just so happens that he is transporting the biggest diamond in the world...the one that Fizz and Weasel were planning to steal! .
Jan 03, 2018 22 min TV-G

Subscribe
S1 E4 Mistaken Identity / Hats Off Magoo! / A Recipe for Success
At the supermarket, Magoo mixes his shopping cart up with a baby stroller. Fizz decides to save the toddler and become a media star. But to do that, he'll have to get the baby out of Magoo's hands before he goes home to cook up a pork roast for Marnie! / Magoo thinks that Fizz is a hat he is going to wear for his romantic date with Marnie. The hamster is going to have a heck of a time saving the planet from a fake meteorite and becoming a world-renowned hero as long as he is a hat! / Magoo thinks Weasel has opened a restaurant, and wants to help him improve it. He mistakes the FizzLab for a kitchen, and prevents Fizz, who he believes is the chef, from perfecting a formula that will turn all pasta into Fizz-shaped fizzetelle.
Jan 04, 2018 22 min TV-G

Subscribe
S1 E5 Skyfall / The Last Groundhog / Hamster Fishing
When Magoo treats Mr Cat to a parachute jump, the two friends land on the top of the AeroFizz. Convinced that they are marooned on a desert island, Magoo mistakes Weasel for another survivor who needs help while they wait to be rescued. / Magoo mistakes Weasel (in an animal costume) for a groundhog being hunted, and confiscates the hunter's gun. In reality, he steals a camera from Fizz, which the latter was using to make a super cute video to attract millions of views online. / Fizz is at the municipal pool, he wants to revolution the world of sub-marine hairdressing! But Magoo, thinking that he is actually fishing in a lake, starts trying to catch Weasel, who he thinks is a magnificent, huge fish, thereby sabotaging the hamster's efforts every time he tries to think.
Jan 05, 2018 22 min TV-G

Subscribe
S1 E6 Nice Little Doggy / Home Havoc / Whiter Than White
Magoo is handing out food to the local neighborhood animals when he stumbles on a gigantic, horrific hamster that Fizz has released from some parallel dimension. Magoo thinks it's some poor, homeless dog with difficulties eating. / Magoo can't find the book that Linda lent him and he's ready to turn the house upside down to find it. The problem is that he is not in his house but in Fizz's loft. He makes such a ruckus that the hamster starts believing he's got a ghost in the house. /
Jan 06, 2018 22 min TV-G

Subscribe
S1 E7 Fizz Tower / Hibernafizz / Doctor Magoo
Thinking he's hunting down a rat in his attic, Magoo finds himself on the theme park, devoted to...the glory of Fizz. He decides to get rid of the little pest the "rat", who is none other than that megalomaniac hamster. / Magoo comes across Fizz encased in ice and thinks he has found a prehistoric man. He thaws him out and acts like a Cro-Magnon, so as not to distress him. When Weasel tries to save Fizz, Magoo mistakes him for an ill-intentioned scientist. / Magoo thinks he's helping out at an understaffed veterinary clinic. In fact, he's at the supermarket, where Fizz is trying to gain popularity by selling his cleaning products. Magoo mistakes the hamster for the President's sick Yorkshire terrier.
Jan 07, 2018 22 min TV-G

Subscribe
S1 E8 Space Hamster / Poolwatch! / Magoo in Shining Armor
In order to make himself an object of worship, Fizz makes people believe he's an alien coming to share his wisdom. Magoo mistakes him for his favorite singer, Sultan, in the middle of an autograph session. As usual, he ruins Fizz's glorious arrival. / Magoo thinks that the whole neighborhood has been flooded, when in fact he is just at the local swimming pool. He starts trying to rescue all of the swimmers and sabotage Fizz's plan to become the greatest super hero lifeguard the world has ever seen! / Magoo, on a construction site, thinks he's been hired for a medieval theater show. Fizz and Weasel bump into Magoo at the top of the tower. He mistakes the former for a damsel in distress and decides to save "her" from the clutches of an evil prince.
Jan 08, 2018 22 min TV-G

Subscribe
S1 E9 Baby Steps / Ghost Hunt / Toes in the Sand
Magoo is babysitting the Neighbors' toddler. The baby flees and kidnaps Fizz mistaking him for a plush toy. Thinking he's playing hide and seek with the toddler, Magoo wanders across the dangers of New York with Mr Cat and Weasel on his heels. / Fizz has invented a machine which stops toast from landing butter-side down. Magoo, paying his neighbor a visit, sees some floating toast and believes a ghost is haunting their house. He refuses to leave until the ghost has disappeared! / Magoo thinks he is on a beach and that sailors are emptying their oil tanker right into the ocean. Wanting to put a stop to the pollution he keeps Fizz and Weasel from pouring concrete and embedding a huuuuge Fizz paw print in it.
Jan 09, 2018 22 min TV-G

Subscribe
S1 E10 Santa's Little Helper / Mega Magoo vs Dr. Fizz / At the Heart of the Crater
Magoo, a Christmas volunteer in a supermarket, thinks a burglar is entering overnight and decides to stop him. In reality, it is none other than Weasel, who is helping Fizz replace all the toys with Fizz plushies. / Fizz, controlling a robot, distributes free ice cream to everyone in the city. When Magoo mistakes him for a destructive monster, he gets sprayed with ice cream; now, believing he's been given superpowers, he uses them to get rid of the monster. / Magoo thinks that he is at the foot of a volcano, but in fact, he's next to a huge soup vat. And he sets it all awry. He thus stops Fizz from turning the vat vapors into clouds shaped like... Fizz. Magoo thinks that a volcanic eruption is underway.
Jan 10, 2018 22 min TV-G

Subscribe
S1 E11 Dusk of the Cucumber / Spinning Headlock Elbow Drop / Lost in the Subway
Fizz invents a cucumber that turns whoever is holding it into an object of human worship. When Magoo sees hypnotized passers-by being drawn towards Fizz and Weasel, he thinks it's the zombie apocalypse and grabs the cucumber as a makeshift weapon. / Magoo thinks that he is auditioning for a circus troop, but he is actually in a professional wrestling ring, in the middle of a fight against... Fizz, who is decked out in a super-muscle-bound outfit, ready to knock the little man out for the count. / Magoo thinks he is in the subway but actually, he's in a cave. Running into Weasel, he thinks he's lost and decides to help him find his way. He thus sabotages Fizz's plan who is trying to finish a "fake" prehistoric fresco in his effigy.
Jan 11, 2018 22 min TV-G

Subscribe
S1 E12 Dinosaur Island / Saving the Gnomes of Astroturf / The Golden Fizz
Fizz has reduced the size of the moon in order to model it in his own image. But Magoo thinks it's a dinosaur egg ready to hatch, so he's looking for his mother and protects him from the dinosaur eater: Weasel. / Magoo mistakes some kids at the park for gnomes in a magic forest. Fizz uses a remote to immobilize them, to win over their parents. Magoo steals this "magic scepter" that put a spell on the gnomes. / Fizz plans on replacing the statue from an Oscar-like award's ceremony, with a statue in his effigy. But Magoo grabs it, thinking he has found a magnificent object in a home decoration store. Fizz tries to get it back, but no way Magoo found it first!
Jan 12, 2018 22 min TV-G
Show More