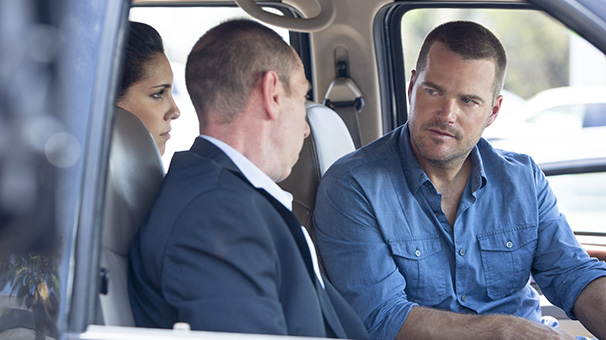 Insider here! If you're getting tired of watching repeats, you'll be happy to know the NCIS: Los Angeles crew is downstairs right now revving up for our FIFTH season! The producers are locked away planning the premier and the drivers are just about finished hauling our gear back onto the Paramount lot. All one thousand tons of it.

If you missed last season's finale, you should know that when we left off, the team had recruited their LEAST favorite person to help track down a nuclear arms dealer. Unfortunately, things didn't go so well. At least not for Sam and Deeks, who were both getting tortured the last time we saw them. Neither were things going well for Michelle Hanna (Sam's CIA wife) who we last saw falling from the thirtieth floor of a building in downtown Los Angeles. Basically, the whole operation went FUBAR, as Sam would say… if he could talk right now. I just read the first act of the Season Five premier and it looks like things may not be getting much better either. I don't want to spoil it so to find out who lives (if anyone) tune in to our premier and KEEP COMING BACK!