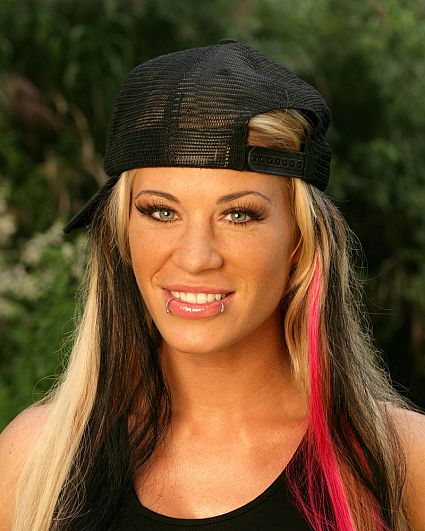 Ashley
Biography
Growing up in Long Island, New York, with a father, brother and uncle who competed in amateur wresting, Ashley Massaro was well-prepared to make it in the World Wresting Entertainment. A former gymnast, she competed in Miss Hawaiian Tropic pageants and was crowned Miss Hawaiian Tropic USA in 2002 and Miss Hawaiian Tropic Canada in 2005. She currently works as a model and a professional wrestler with the WWE. She came to the WWE as a contestant in the 2005 RAW Diva Search. After beating out seven other finalists, she received a one-year contract with the World Wrestling Entertainment.

Massaro tours around the world and appears in front of thousands of people at arena shows approximately four times a week. She appears on "WWE Raw," "Smackdown" and Pay-Per-View Weekly. She has done a tour of Iraq, Afghanistan and Kuwait, where she visited the troops with the WWE for the United Service Organizations (USO). She was on the cover of the April 2007, issue of Playboy. She has also appeared in FHM, Stuff, Maxim and the covers of Femme Fatale and FLEX magazines. She hosted several E! "Wild On" episodes and appeared on "Breaking Bonaduce" as his personal trainer. She has also guest-starred on CW's "Smallville" and "Extreme Makeover: Home Edition," and she brought her love of music to Fuse TV when she took part in a special edition of "The Sauce." MTV's “Celebrity Death Match” has also featured her in the claymation series. In her spare time, she visits numerous hospitals to boost morale, including the Bethesda War Veteran Hospital in Washington, DC.

Massaro received her Bachelor of Science degree in Communication with a minor in Business from State University of New York. She describes herself as spunky, quirky, optimistic, happy, resourceful, creative, adaptable and relentless. She is obsessed with all things music.

Massaro currently resides in East Northport, New York. Her birth date is May 26, 1979.