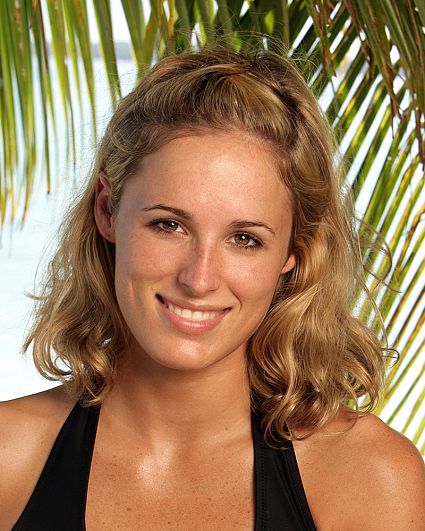 Candice
Biography
Candice Woodcock was born and raised in Fayetteville, North Carolina. She graduated from Terry Sanford High School where she was president of her class and captain of the soccer and cross country teams. She received a perfect score on the math portion of her SATs.

Woodcock won full merit scholarships to both the University of North Carolina at Chapel Hill and Duke University. She accepted the Morehead Scholarship to attend UNC-Chapel Hill and eventually received her Bachelor of Science Degree in biology and psychology with a minor in chemistry.

SURVIVOR: AFRICA inspired Woodcock to do service work in Africa. Following her freshman year of college, she spent 10 and a half weeks living in a mud hut with a tribal family in the western highlands of Kenya. She taught primary and secondary school in the village and designed her own service project where she ran a clinic that distributed over 700 pairs of eyeglasses that had been donated by parties in the United States. Inspired by her work in Kenya, Woodcock became the fundraising director and then executive director of Students for Students International, a completely student-run, non-profit organization at UNC-Chapel Hill that gives scholarships to students in Zimbabwe and Tanzania. Woodcock also spent a summer studying health care in Chile and Peru and another summer splitting her time between work at the Cancer Clinic at George Washington University Hospital and La Clinica del Pueblo, a free Latino clinic in Washington, D.C.

After graduation, Woodcock decided to take a year off before continuing her studies. She worked full-time for six months as an Assistant Director of Clinical Trials and as a Director of External Practice Development for an ophthalmology practice, and then part-time for the following six months. She has just begun graduate school at Georgetown University to attain a Master's Degree in physiology and biophysics. She then plans to attend medical school. She hopes to use her medical degree to do service work in developing countries and also in underserved areas of the U.S.

Woodcock enjoys spending time with her family and friends, working out, playing sports, being in the water and playing with her dog, Louis James.