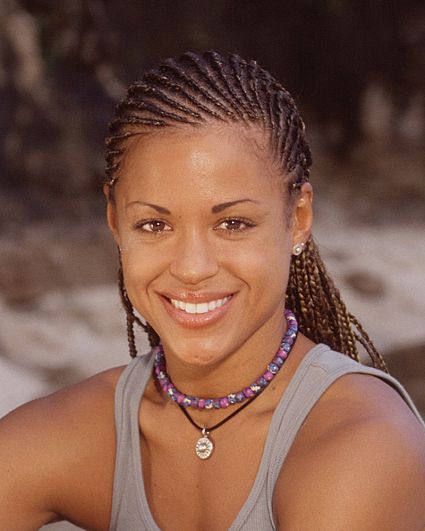 Alicia
Biography
Since finishing ninth on SURVIVOR: THE AUSTRALIAN OUTBACK, Alicia Calaway most recently worked in broadcasting as a health and fitness reporter for a network affiliate station in New York City. Prior to that, she worked for the Oxygen Network as a host and fitness correspondent for the program, "Pure Oxygen." In addition, Alicia co-hosted and reported for the ESPN anthology series, "The World's Strongest Man" and "The World's Strongest Woman." She also reported for the syndicated program "Marjoe Gortner's Holiday Celebrity Sports Invitational" and did freelance correspondent work for CBS' "Early Show" and the syndicated magazine show "Extra." She was also a spokesperson for Reebok.

In addition to broadcasting, Alicia has made personal appearances on behalf of companies within the entertainment and fitness industries, as well as non-profit organizations. She is also a mentor for teenagers.

Born in Bridgeport, Connecticut, and raised in Trumbull, Connecticut, where she lived for over 26 years, Alicia also lived in Norway for 2 months. She graduated from the Fashion Institute of Technology in New York City with two associate in applied science degrees, one with honors from the dean's list. Past professions include work as a computer graphic artist, aerobics instructor and personal trainer.

Alicia enjoys cooking, entertaining, and horseback riding. The accomplishment she is most proud of is when she won the AAU (Amateur Athletic Union) Ms Connecticut Amateur Natural Bodybuilding Competition in 1994. She is certified through the National Academy of Sports Medicine (NASM) and is a medical exercise specialist of the American Academy of Health, Fitness and Rehabilitation. She is also CPR certified with the American Red Cross.