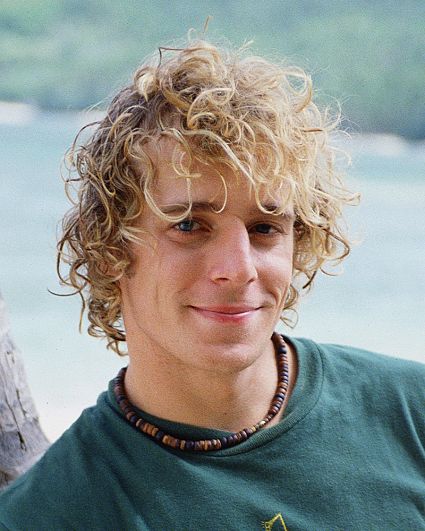 Gabriel
Biography
Gabriel Cade was born and raised in the tiny alternative community of Celo, North Carolina. His father is a doctor and his mother is a nurse. In addition, they run a small farm with goats, chickens, rabbits and fields of blueberry bushes. Cade has one brother, Jason, and a twin sister, Emily.

During his first two years of high school in Mitchell County, Cade was a competitive figure skater, a member of a singing quartet and was part of a symphony orchestra (having played classical cello since he was seven years old). He also studied jazz and ballet dancing. He then transferred to the North Carolina School of Science and Mathematics for his junior and senior year. As the school required community service, he spent two summers working for World Changers, an organization that assists in building homes for impoverished individuals. Graduating in 1996, he then traveled throughout Europe where he eventually began volunteer teaching English in a small town in France while also leading adventure trips for students.

Returning to the States, Cade enrolled at the University of North Carolina where he intended to pursue a double major in biology and drama with a double minor in English and French. During his freshman year, he completed a rescue scuba diving course to become certified. After his freshman year, he returned to Europe to continue leading the adventure trips. He then returned to the States and enrolled in a Sarasota, Florida-based school named New College. With no grades and no core requirements, if a course didn't exist, he was able to create it and call it an independent reading project. For a brief time, his major was French Science Fiction. While there, he was able to fulfill a lifelong dream of playing soccer with a semi-professional team while also coaching at a local middle school. In addition, he performed and taught ballroom dancing.

In the summer of 1998, Cade spent four months hiking the Appalachian Trail from Mount Katahdin, Maine, to Springer Mountain, Georgia (approximately 2,000 miles). He then returned to college, this time at the University of North Carolina, Asheville, until he decided to move to Los Angeles, California. He obtained a job writing for a national college newspaper where he ran the entertainment section. This afforded him the opportunity to interview his favorite celebrities, attend the Sundance Film Festival and participate in lavish press junkets. When he decided to leave the paper, he then began teaching an S.A.T. math prep course while bartending and serving as a chauffeur for an elderly gentleman.

Gabriel Cade's favorite hobbies are reading, writing, soccer, camping and learning new languages. He is fluent in French and moderately versed in three additional languages. He currently lives in Hollywood, Calif. His birth date is July 1.