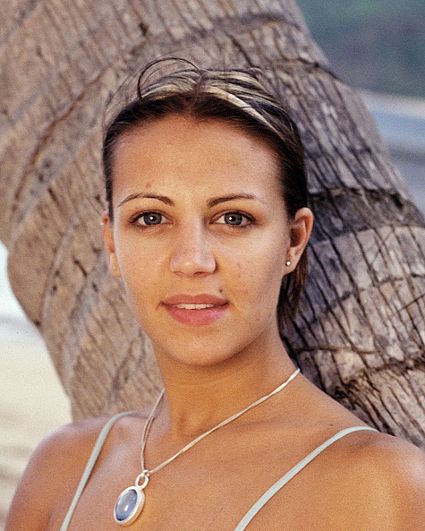 Sarah
Biography
Sarah Jones was born in Juneau, Alaska. While growing up, she moved back and forth between there and Virginia. In fact, she drove cross-country six times before she turned 13 years old. She later moved to Napa Valley, Calif., to attend Vintage High School where she was a cheerleader all four years. In 1996, Jones moved to Santa Barbara, Calif., to obtain an Associate of Arts degree in Business Administration with an emphasis on marketing from Santa Barbara City College. She then relocated to Huntington Beach, Calif., to obtain a Bachelor of Arts degree in Communication (with an emphasis on photography) from California State University, Fullerton. A member of Alpha Chi Omega Sorority, she held the office of Historian and was in charge of photographing all their events.

Most recently, Jones worked as an account manager for a clothing company while also doing freelance work as a still photographer. In addition, she works part time as a representative for a major beverage company while also maintaining work as a food server/cocktail waitress at a major restaurant chain. She enjoys rock climbing, dancing and traveling in her free time.

Jones has an older sister, Abby, who is married with two small children, a younger brother, Tay, and one younger sister, Samantha. Jones is extremely proud of her parents, especially her mother who is a breast cancer survivor.

Last August, Sarah Jones visited Hawaii, completing her ambition to visit every single state in the U.S. She currently resides in Newport Beach, Calif., with her cat, P'Nut. Her birth date is August 11.