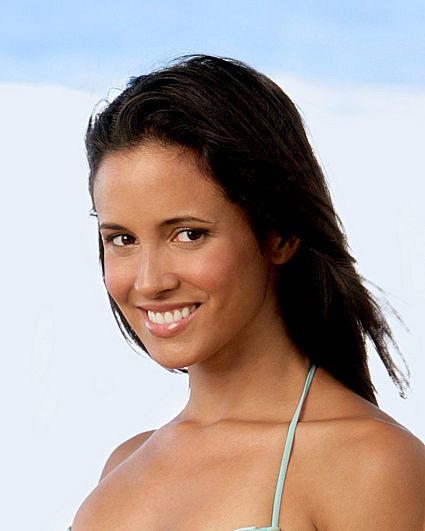 Monica Padilla is the first in her family to not only complete her undergraduate degree but also obtain a Juris Doctor.  Recently, she graduated from the Thomas Jefferson School of Law in San Diego, where she perfected, what she describes as, her power of persuasion. She fully intends to use her beauty and the fact that she “can sell ice cubes to an Eskimo” to her advantage in the game.

Exotic looks, in addition to intellect, have landed her a wide range of jobs, such as a clerk position at a well-known investment firm, as well as a position playing a theme park Pocahontas. With the keen ability to change from bookworm to party girl in a matter of moments, she is sure she will be able to adapt to anything she comes across on the island. She says that while in the Samoan wilderness, she will miss partying, clubbing and lunch with friends the most, which was exactly what she did in her free time even as she was in the home-stretch of obtaining her degree.

Much like Parvati and Amanda (from SURVIVOR: MICRONESIA), she plans to be as “sweet as pie,” while subtly using the “flirt card,” in order to come off as endearing rather than overbearing. In addition to killing her fellow castaways with kindness, she has every intention of pulling her own weight around camp while studying their words and actions meticulously to “learn about her enemies before she chooses her weapon.” Confident that she can win the title of Sole Survivor, Monica plans to buy a designer purse as her first selfish purchase.

Monica resides in San Diego, Calif. and her birthday is July 14th.