Joaquin Shares His Story of the Surprising Tally That Sent Him Packing: Season 30’s sixth eliminated talks about his blindside and that eastcoast bromance

John Cochran, simply known as "Cochran" to Survivor fans, competed on the show during Season 23 and walked away as Sole Survivor on Season 26. After the most recent castaway Joaquin Souberbielle had his torch snuffed by Jeff Probst, Cochran sat down with the former Survivor player for a Q&A. Read on to hear how the interview played out. 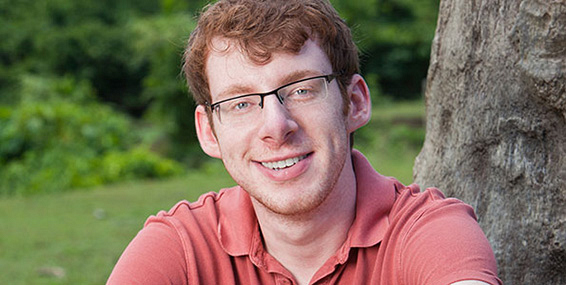 By John Cochran
Marketing director Joaquin Souberbielle had somewhat of a rollercoaster Survivor experience.  After a few initial strategic slipups (“neutral” option, anyone?), Joaquin managed to regain the trust of his fellow White Collars, and seemed well-positioned after a tribal swap landed him on the physically dominant Escameca tribe.  Unfortunately for Joaq, a thrown challenge and an ill-fated bromance with Rodney turned him into a real Dead Man Joaquin (get it?  Like “Dead Man Walking”).  After last night’s blindside, I talked to Joaquin about that bizarre thrown challenge, his post-merge plans, and unrequited bro-love.

Cochran: Let’s go back to the very start.  It’s day one, and you and So are faced with choosing between food for your tribe and a clue to the immunity idol for yourself.  You and So choose the idol clue and concoct a lie about there being a “neutral” option that you claim to have picked.  Naturally, your tribemates are skeptical.  Do you feel like the suspicion about you this lie created put you in a hole you had a hard time getting out from?

Joaquin: I regretted it immediately after day three — it ruined my chances of keeping So alive in the game, which is very unfortunate.  But I don’t feel like it hurt my chances of moving forward with my tribe — because what you don’t see is, after day three, Tyler, Carolyn, and I basically became the power team on our tribe.  Max and Shirin were on the outs starting day four until the mix-up.  So, of course, I regret it because my girl went home and I wish I could’ve kept her around longer.  Just for the record, though, the “neutral” thing was not my lie; sorry, So.

Cochran: I was surprised that, even after the bungled “neutral” lie, you seemed to have pretty good relationships with your White Collar tribemates.  How did you manage to ingratiate yourself so well after that day one mistake?

Joaquin: It’s funny — the only thing I have to thank Shirin for is being so crazy that it drew me, Carolyn, and Tyler together and it built this extremely strong bond.  And Carolyn had this hatred for Max, which was great because —  I didn’t mind Max, but I couldn’t stand Shirin, and Max and Shirin were great friends.  So guess what: sorry Max, [expletive] you — you did it to yourself.  You take the crazy person on the tribe and you become best friends with her, then everybody else is gonna look at you like, “Uh, alright.”

Cochran: You mentioned the danger of teaming up with the crazy person on a tribe, but you went ahead and closely aligned with Rodney, who didn’t have the best track record with his own tribemates.  Why did you make this move, instead of, say, teaming up with Joe, Sierra, and Tyler, since Sierra clearly had no interest in working with Rodney?

Joaquin: The thing is, I got there and I don’t know what went on the prior twelve or thirteen days before I arrived.  So I finally see somebody I could vibe out with and talk about real things and laugh with.  Rodney’s a clown — he’ll make anybody laugh.  He’ll also make you want to kill him, but that wasn’t the case with me.  Of course, looking back, I probably should’ve taken Joe — the thing is, I was worried about bringing Joe into the merge and having four No-Collars on the other side and then him linking up, making it five, and then that would’ve been a disaster.  Honestly, I thought everyone was thinking the same way as me.  Unfortunately, they were not.

Cochran: Let’s talk more about your relationship with Rodney.  Watching at home, it was clear how intense the bromantic passion he had for you really was.  You, on the other hand, seemed slightly less bromantically attached.  Was this a true bromance, or was it kind of one-sided?

Joaquin: Listen, like I said, you go out there and you’re with these people you can’t vibe out with, and then Rodney probably saw me and was like, “Finally, another bro — somebody I can talk to about girls and going out and partying.”  He’s my very good friend even to this day.  We talk almost every single day.  He’s come down to visit — we’ve gone out for New Year’s Eve. We cause a lot of trouble together.  So it’s definitely mutual — that’s my boy right there.

Cochran: Beyond your bromance with Rodney and your earlier bond with So, it wasn’t clear what sort of relationships you had with the other players.  How did you connect with everyone else?

Joaquin: Carolyn and Tyler and I were very, very, very close.  When we got to the mix-up and I saw Tyler was on my team — who at the time was my closest ally — I was ecstatic.  I got along with Max; I thought him and his funny delusional thinking was hilarious.  I thought he was a good guy.   Sierra, like you saw, I got along great with her.  We vibed out and laughed a lot.  Even with Mike and Dan… I’m a very easygoing person; it’s hard for someone not to like me.  At the end of the day, I’m a likable person; I’m very social.  I can talk to anybody.  Like I said at the beginning, my job doesn’t define me.  I’ll go out with any of these people and have a drink and — before you know it — it’s 3 in the morning and we’ve spent the entire night talking and laughing our faces off.  And that’s basically how it was with every single person there.  Except for Shirin.

Cochran: Not everyone can be your friend out there, though.  Who did you view as your biggest threats?  And were you aware how big a threat Mike was?

Joaquin: Challenge-wise, it was Joe.  It was me and Joe carrying our team every single challenge.  So I basically thought of Joe as the biggest threat out there.  Because at any point in time either him or I can completely come from the back in third place and take our team to first.  Strategy-wise, yeah, it was Mike, but I was gonna have to wait until we hit the merge to get him out, but unfortunately I never got to that point.

Cochran: Alright, so you brought up challenges.  What happened with last night’s thrown challenge?  Whose plan was it?  Who was in on it?  Were you not aware that thrown challenges almost always anger the Survivor gods?

Joaquin: I was not in on it.  Rodney brought it to my attention the day before the challenge.  Then I spoke to Tyler about it, then we spoke to Rodney again and tried to convince him that it probably wasn’t the smartest move.  I believe the people who were involved were Rodney and Mike and maybe Dan, but if you see, Dan won his round, so… It’s a really good question.  We’re going to have to wait for one of them to take a loss for us to find out exactly what the [expletive] they were thinking.

Cochran: The preview for next week’s episode showed us that the merge has finally arrived.  Assuming last night’s tribal council had gone the way you wanted, what were your plans for the post-merge game?

Joaquin: In an ideal world, I thought I was going in there with me, Tyler, Rodney, and Sierra.  Then, on the other side, obviously I had Carolyn, who was my really close ally.  And then Rodney said that he was really close with Kelly and that we were going to head over there, and be us six against them.  I wasn’t worried — I was dying for individual play.  I just wanted to go out there and try and represent myself and not be held back by people who can’t finish a [expletive] puzzle and decide they want to do a 50-piece puzzle instead of a 10-piece puzzle.  For the record, that was not me choosing that 50-piece puzzle (in episode one); I actually grabbed the 10-piece first, and I got yelled at by Shirin to grab the 50-piece.  I had nothing to do with that [expletive].

Cochran: Ok, back to last night.  We saw #blindside pop up at the bottom of the screen when you got voted out.  Was it a true blindside?  Or was there a certain point during tribal council where you sensed things might not be going your way?

Joaquin: Last night’s tribal council was probably the longest one so far this season.  I was just sitting there, and the Blue Collars were still fighting at tribal council, so I was like, “Ah, this is [expletive] amazing.  It doesn’t get any better than this.”  I think at one point Jeff asked me something, and I just wanted to let them keep fighting.  They were still ragging on Sierra, so I’m like “This poor girl can’t get enough of this beating” and then, at the last minute, she ends up writing my name down.  It was unreal.  I even felt safe when there were three “Joaquin” votes and three “Joe” votes — I was like, yeah, this last vote will be Sierra’s vote for Joe.  I know, [expletive] ridiculous.

Cochran: Let’s end with something a little more uplifting.  What would you say is your happiest memory from your entire Survivor experience?

Joaquin: I wouldn’t put it as one memory.  I’d probably have to say the relationships that I made with these complete strangers.  That I have these people in my life forever who understand what I went through.  And I can pick up the phone and call them and say, “Hey, my plane just got misdirected and now I’m in Kansas City and I’m spending the night; you wanna go grab a drink?” and boom, “Yeah, of course.”  Just these bonds and relationships that I’m going to have for the rest of my life.  These people are absolutely amazing.  It was worth every night that I starved, every night that I got rained on.  It was the most amazing experience ever, and I hope I get the chance to do it again some time.