Drop your buff and let's take a look back at the very first time the tribe had spoken.
The most striking moment about re-watching the first episode of Survivor—which originally aired May 31, 2000—comes barely 10 minutes in, as the first-ever group of castaways salvage anything they can from a boat in the middle of the South China Sea, before being marooned on an island off the coast of Borneo.

Host Jeff Probst (who hasn't aged a day!) walks through the madness, introducing the world to the phenomenon that Survivor is about to become, when he says, "39 days, 16 people, 1... Survivor!"

STREAM: The Very First Episode Of Survivor On CBS All Access 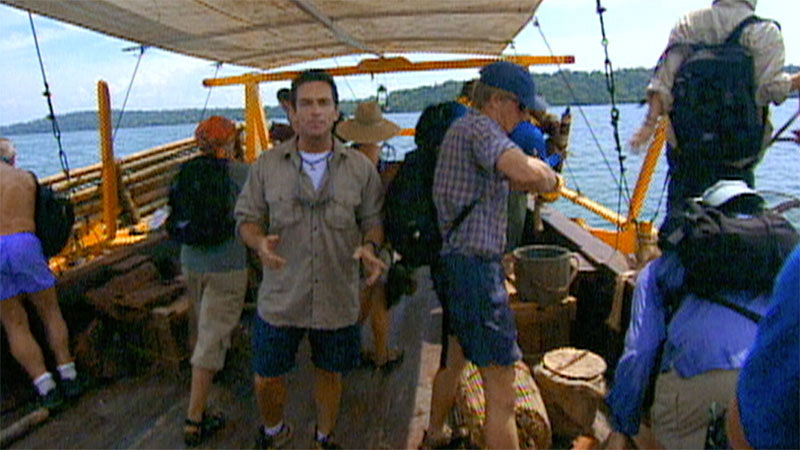 It's then that we realize Survivor, one of the longest-running reality shows—now in its 37th season—has been a fully baked, game-changing series from the very start.

If you haven't revisited the first season or the first episode since it first aired, what you'll find can hardly even be classified as nostalgia. That's because Mark Burnett's vision of the competition series is so clear and focused from the start, it's an exercise in television mastery as much as a blueprint for what the series will later become.

Of course, one thing that's kept Survivor fresh for 37 seasons—besides new locations and gameplay twists—is the variety of personalities, and Borneo set the tone for the culture clashes that were to come over the next 18 years. 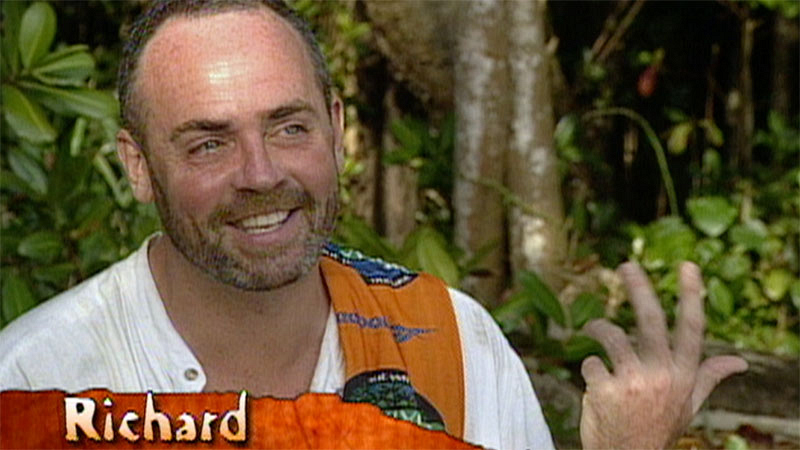 Unlikely friendships at the Tagi tribe
Future Sole Survivor Richard Hatch is remembered for his landmark victory, of course, and also his penchant for walking around in the nude. What's striking in this first episode, however, is how abrasive he comes off.

Almost as soon as the Tagi tribe arrives at their beach—which takes two hours after jumping ship—he puts a target on his back by wanting to talk strategy before the castaways even get started unpacking or building the shelter.

Say what you will about Richard, he was nothing if not confident about how the season would play out.

"I've got the million-dollar check written already. I mean, I'm the winner," Hatch tells the camera, adding with a knowing smirk, "It's that kind of cocky attitude that really makes people hate your guts." 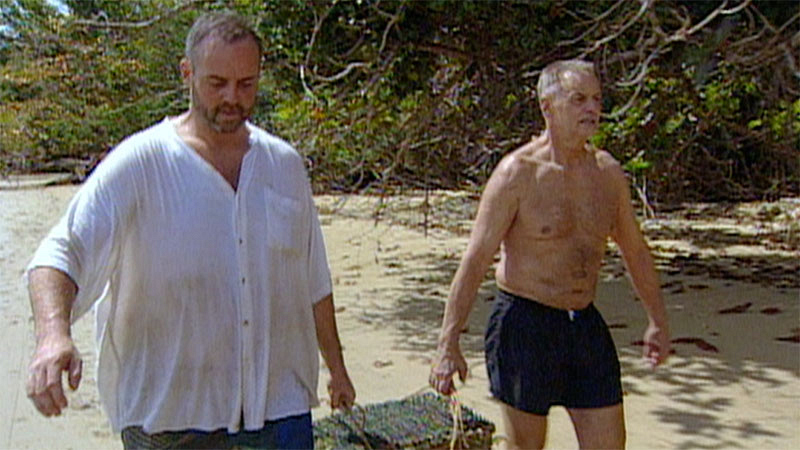 For this reason, it's not really a surprise when we see Richard start to hit it off with Rudy Boesch, a 72-year-old ex-Navy SEAL who has taken it upon himself to be the alpha of Tagi.

Though Rudy starts the episode being a little too aggressive, he seems to figure it out eventually: "If they listened to me, they'd all have haircuts... I gotta fit in, not them," he admits. "There's more of them than there is of me."

It's an attitude that along with the eventual alliance Richard formulates with Rudy, Kelly Wiglesworth and Sue Hawk, gets him all the way to the Final 3. 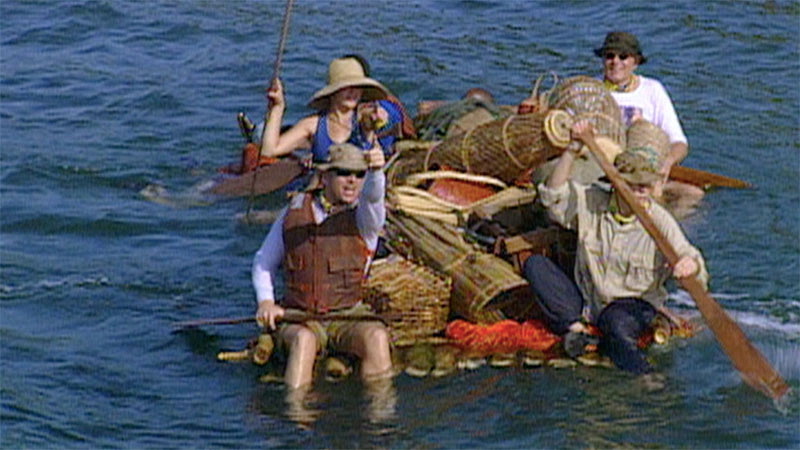 The Pagong castaways struggle
The other tribe, Pagong, has a tougher go of it in the Season 1 premiere episode. Not only does it take them longer than Tati to get to camp—three hours—after being marooned but the eldest castaway, 64-year-old B.B., takes on a somewhat polarizing leadership role much like Rudy does at Tagi.

And, just like Rudy, he manages to frustrate some of his tribemates with his overzealous work ethic.

B.B. works hard to construct a sturdy shelter for the tribe, all while complaining the other castaways are lazy and refusing to take a break even when Gretchen pleads with him to take it easy so they can all remain competitive in the challenges to come. 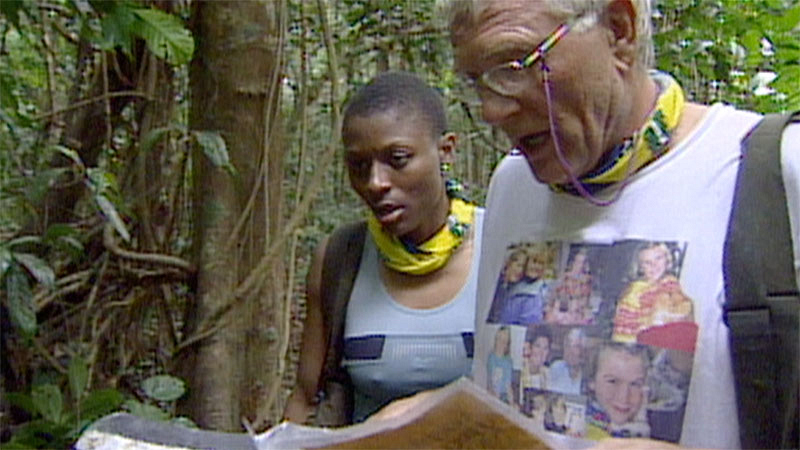 There is some levity at Pagong, however, with B.B. and Ramona finding a map to the tribe's watering hole and the pair head off on an adventure to find it.

"As long as you and I know where the water is and we don't give up the water map," B.B. says, capriciously. "They won't be able to vote us out!"

Unfortunately for B.B., his plan doesn't pan out as he hopes—he's ultimately voted out in Episode 2. 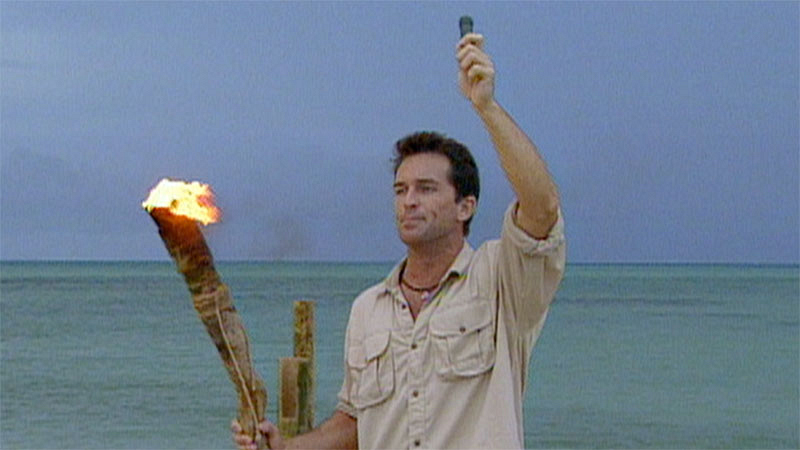 As far as Survivor challenges go, this one is relatively simple: The castaways must guide a raft carrying a primary torch through water along a course, lighting every torch along the way, with each tribe member keeping at least one hand on the raft at all times. 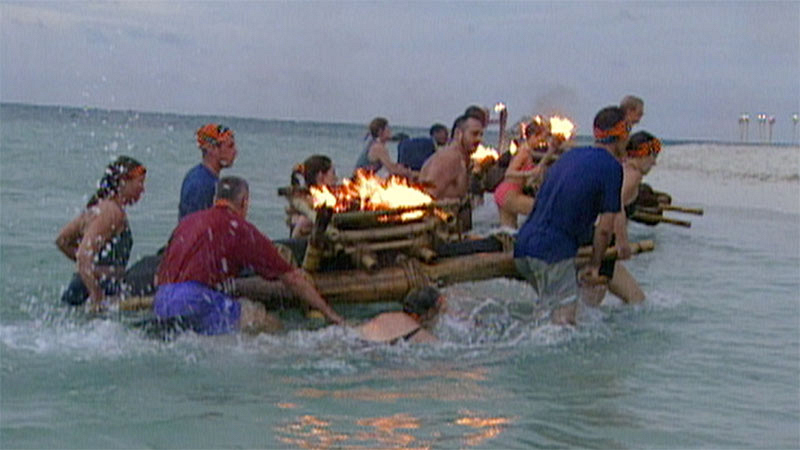 "Don't put me in the position of having to make a judgment call," Jeff tells the castaways before they begin. "There's too much at stake!"

Despite strong leadership and good teamwork from Tagi, a stumble by 67-year-old Sonja costs the tribe their victory, and Pagong walks away with 50 waterproof matches for a campfire and the coveted Immunity Idol.

Jeff then tells Tagi the loss means they'll have to spend the night reflecting—before they head to Tribal Council the following day, where they will be the first tribe to vote someone off the island. 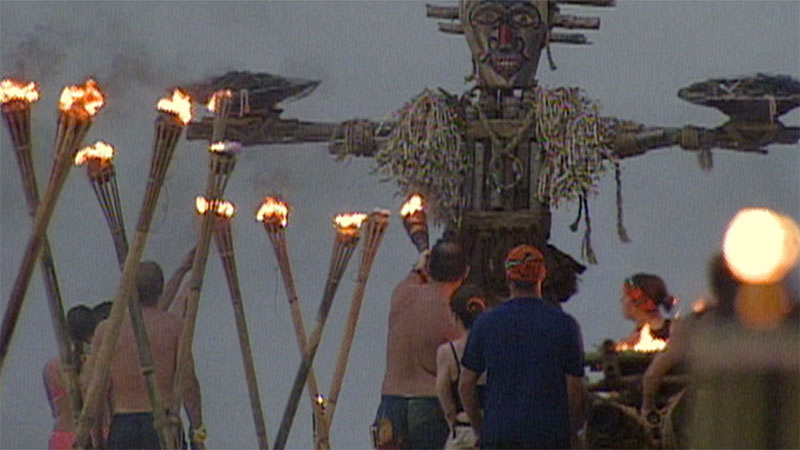 Sonja speaks to the camera about her tribe's loss, saying, "I feel responsible because I couldn't keep up," and it turns out her intuition was correct because the following day would not go well for her. 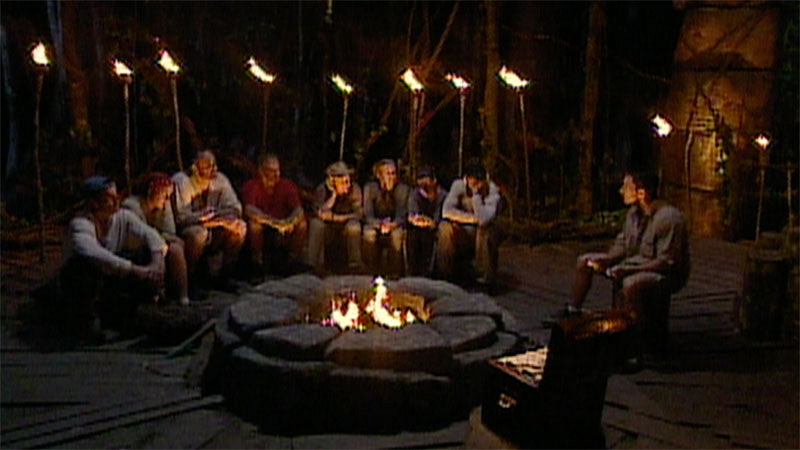 The intense debut Tribal Council
After a long trek through the jungle, Tagi is greeted by Jeff, where he implores them to light their torches. In a line that will soon become iconic for the millions of Survivor fans across the world, he says, "On the island, fire represents life—these torches now represent your life, your identity here at Tribal Council."

Jeff asks the castaways about their first days on the island and explains how Tribal is going to work but, unlike seasons to follow, when the castaways begin voting, everyone seems to be on a different page. There's no real strategy at play—yet—and the vote appears to be truly up in the air. 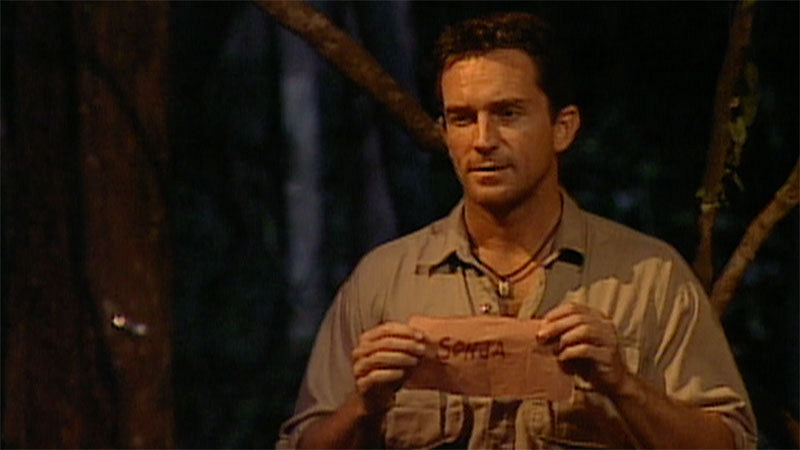 Jeff delivers a poignant speech before he reads the votes, which is a sentiment that repeats in future seasons.

"Before I read these votes, I just want to commend you on the courage it's taken to get this far," he tells the members of Tagi. "There were a lot of steps along the way; any of you could've turned around, nobody did. In my book, that gives you bragging rights for life."

In the end, though, someone has to be named the first person ever voted off Survivor and the unlucky castaway is Sonja, likely as a consequence of her stumble during the first challenge.

(Though, bringing a ukulele as her luxury item to camp may not have helped her case.)

Of course, as Sonja has her torch snuffed, we first hear Jeff utter those four immortal words: "The tribe has spoken."

"Being the first to be voted out is a little humiliating," she reveals later. But, despite her temporary humiliation, Sonja seems to understand the reasoning behind it and even admits that her team did the right thing.

TV history in the making
The first episode of Survivor is certainly a treasured artifact of reality TV history, but the events that would cement Survivor's legacy come throughout the rest of its debut season.

Richard Hatch's formation of a voting alliance would impact the very nature of gameplay for every season of Survivor to come.

And who can forget the first time the castaways eat rats to survive? Or Sue's incredible Jury speech that set the bar impossibly high for all castaways to come? Or even the very first Merge?

Once you revisit the first episode of Survivor, you won't be able to stop watching the rest of Season 1—and quite possibly, the 36 seasons that follow.

Stream all 37 seasons of Survivor, including Survivor: David vs. Goliath, on CBS All Access.