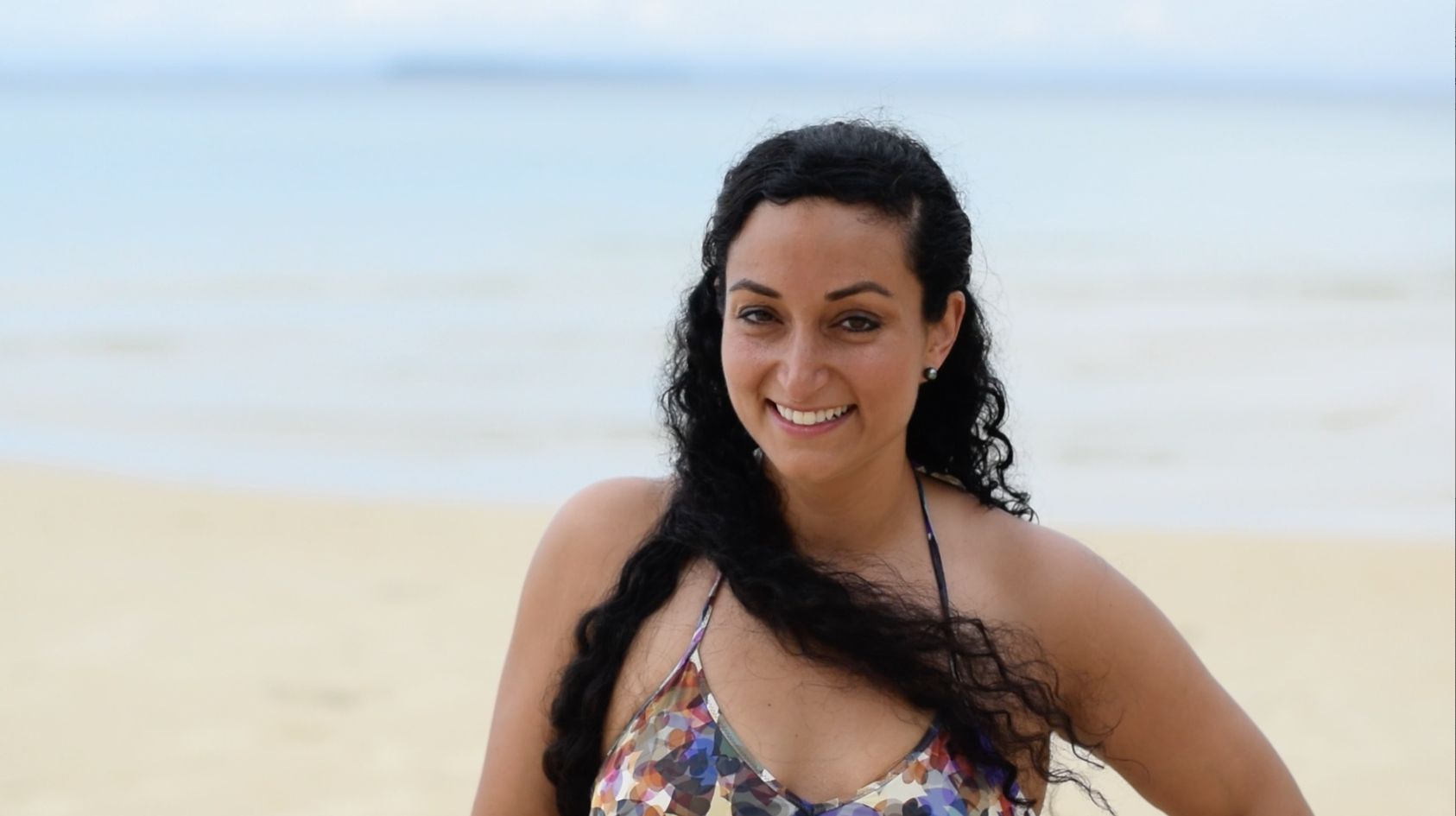 On Episode 2 of Survivor Cambodia, Shirin Oskooi ended up getting voted off camp, which made her two-week Second Chance run bittersweet, especially when you consider how this superfan just competed in Survivor: Worlds Apart.

As she walked off camp last night, Jeff Probst reminded the group, “This season offers a second chance to change what didn’t work the first time but, if you don’t change, history is destined to repeat itself.”

We were able to catch up with Shirin and she shared 12 insights about her experience on Survivor Cambodia, including her thoughts on Abi-Maria Gomes, who she'll be rooting for from home, and how both seasons stacked up to each other. Read on! 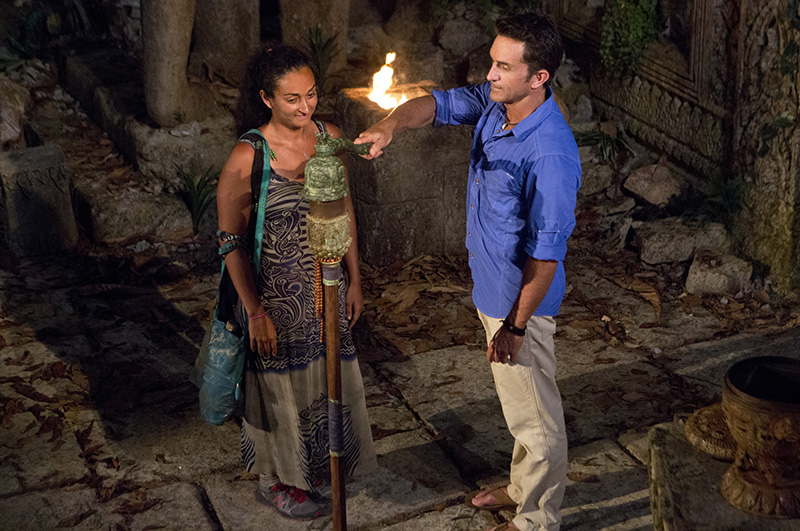 Shirin: "When Jeff Varner told me that he wanted to vote out Spencer [Bledsoe] or Abi, I should have just said, 'Okay, great,' and gone with the flow. And, instead what I did was I freaked out, got really angry because Varner was flipping on our alliance, and so I went behind his back to try to get him out and protect my people. I got caught and then I got voted out because of it.

I really should have channeled my inner Sandra Diaz-Twine and just said, 'As long as it ain’t me… [I’m good].'" 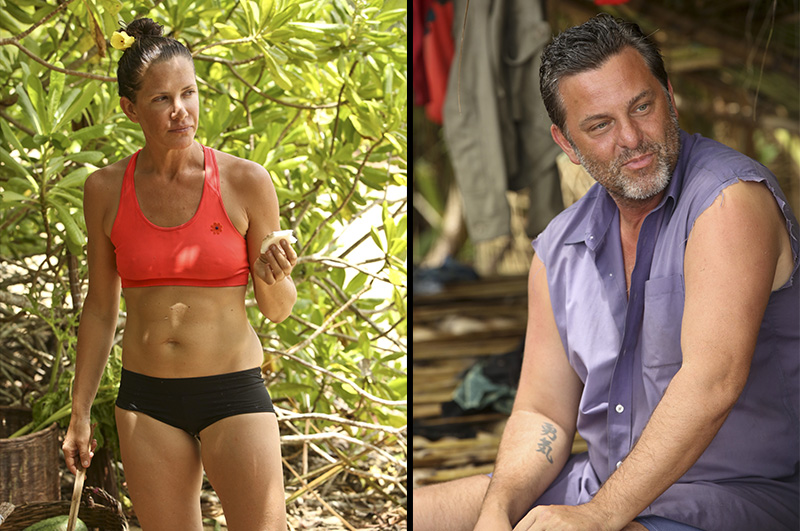 2. How do you think you ended up in the minority, even after helping to get Vytas out the week before?

Shirin: "It’s clear that all the old-school people had a connection with each other, even before the game. Varner and Kelly Wiglesworth have been friends for 15 years. One vote is not going to change that. And, so, I was lucky and skilled to have been able to get Varner to vote with us for that first vote, but then he fell back in line with his old-school buddies.

As soon as I was coming for him, he made the right move.” 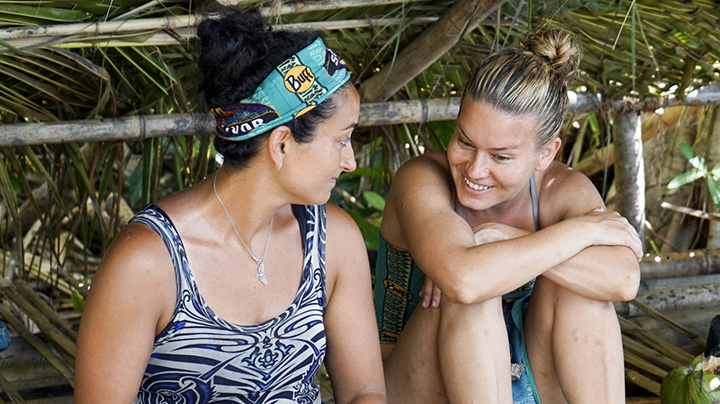 3. Abi-Maria said she wanted to work because of the similarities between you both. What do you have in

common?
Shirin: "Abi and I have absolutely nothing in common, except for the fact that maybe she got emotional the first time around and I got emotional in my first season.

But, what caused those emotions was totally different. What caused mine was [that] I was viciously attacked by a number of people on my cast when I was just there having a good time and not doing a whole lot to deserve those personal attacks. Abi on her season, was the one lashing out on people and personally attacking them... she gets emotional and crazy in a different way.

You’re not even seeing a fraction of what it’s like to live with her. We landed on the beach and she started telling me about Peih-Gee Law being evil because her gut tells her so, she thought Kelly reminded her of Denise Stapley from her season, and she hated Denise, and Terry Deitz reminded her of Michael Skupin and she hated him... she would create these associations with people from her past and use that as a fictional excuse to attack people." 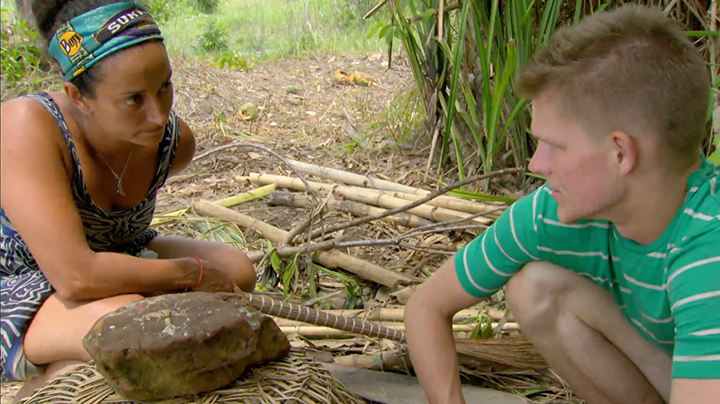 4. How do you think Spencer, someone who said he could relate to you more than anyone else

this season, will do in the coming weeks?
Shirin: "I think Spencer is the smartest and most strategic guy out there. I hope this was a wake-up call to him, to double down and have deeper connections with people. Spencer is exactly the right person to take the right lessons from what just happened at our Tribal Council and turn that into a positive for himself.” 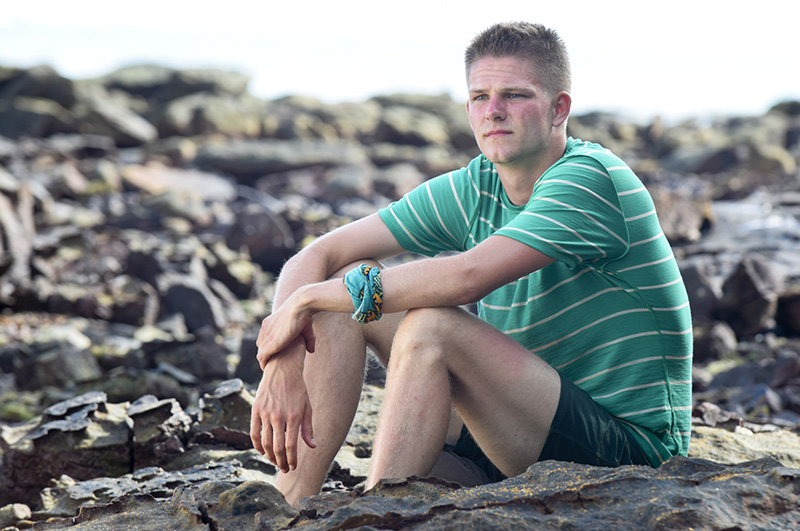 5. So, do you regret working with Spencer?

Shirin: "Not at all. We did a really good job of hiding our friendship, which was how we were able to vote Vytas out. We made sure no one ever saw us talking just by ourselves.

Another thing is this: half of my tribe was not even willing to work with me upfront, so I didn’t have the luxury of being able to pick and choose my alliance. Spencer was a great sounding board and together, we came up with targeting Vytas. Had we targeted Terry, Varner wouldn’t have voted with us." 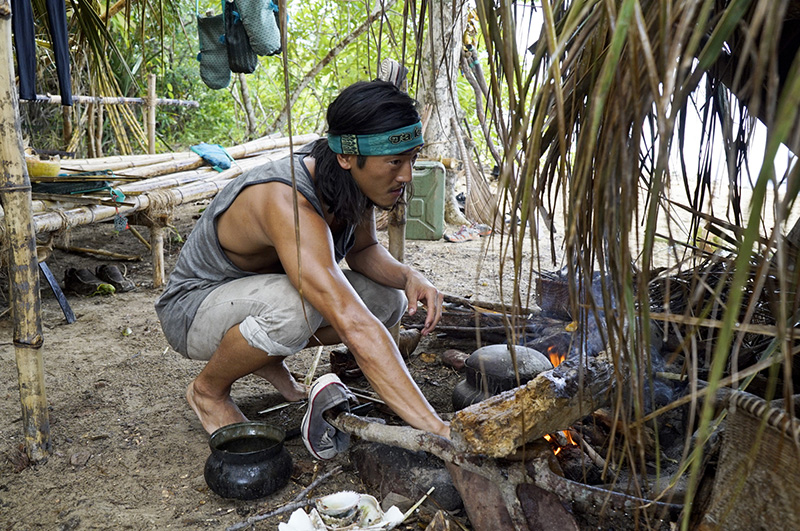 6. Do you really think Ta Keo is out to get Woo next, and should he take what you had to say to him to

heart?
Shirin: "I think if Woo Hwang has half a brain at all, he will definitely take what I had to say to heart.

And, my main message was him was, you’re aligning yourself with a bunch of old schoolers who have known each other for a decade, and if you think they’ll choose you over each other, then you’re delusional. Second of all, Woo is one of the most athletic people in the game… so the second someone like him makes it to the merge, he’s going to be a target, because no one is going to want to compete against him.

He should be worried. Literally, we were offering him world, the sun, the moon, the stars, and he said, 'No.' You don’t say, 'No.' You take what you can get. He’s now shown Spencer where his loyalties lie, and if anything, Woo’s alienating the new schoolers that were on his side." 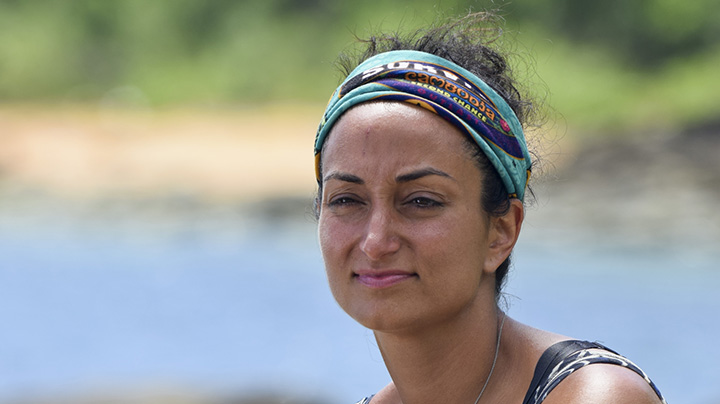 7. Looking back at both seasons, what has been your favorite Survivor memory?

Shirin: "It was from my first time playing [and] winning the beef stew reward. It was right after Max Dawson was voted out. I was on the bottom and no one was talking to me. At the Reward Challenge, Jeff Probst keeps going, 'Beef stew, mac and cheese, hot chocolate, smores... plus you get to see turtles on the beach laying eggs.'

And, I thought, that is a tailor-made reward for me, but I’m not gonna get it. I’m gonna lose. And then we won, and we got to eat all this amazing food. It was magical." 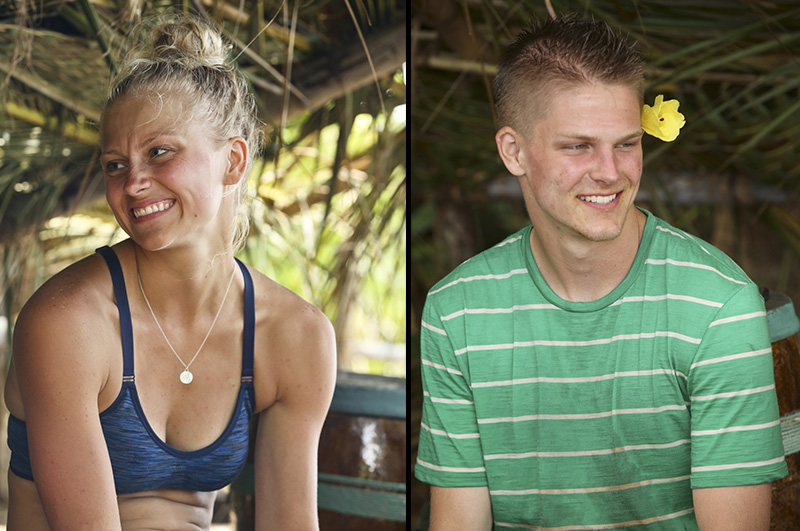 8. Which castaway could you picture winning the title this time around?

Shirin: "Obviously, my loyalty goes to Spencer and Kelley Wentworth. Kelley is playing a great game of, 'I’m going to fit in, but if people approach me, I’ll let them know just how good I am,' and now she’s got that Hidden Immunity Idol in her pocket.

And, then you’ve got Spencer, who's a little more aggressive. I think he’s underestimated, because he’s so young. They have no clue how intelligent and strategic he is… they’re not gonna see it coming." 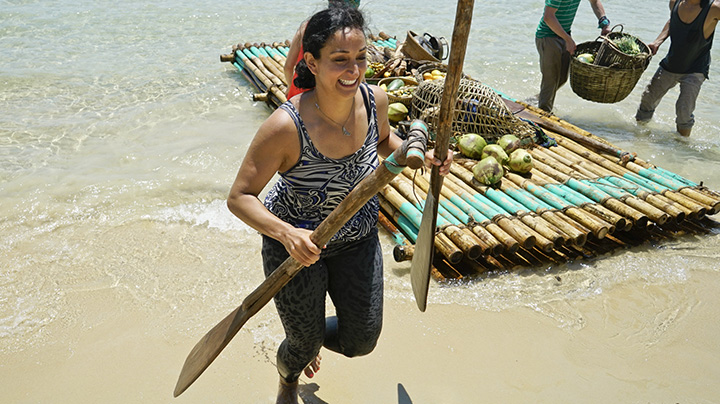 Shirin: "I would say that this season had a different energy because it was returners. People showed me a kindness that I didn’t get from half of my starting tribe from my first season.

Tyler Fredrickson and Joaquin Souberbielle were rude and mean to my face from day 1. I thought, 'Wow, this is Survivor. I thought we were all supposed to be nice to each other even if we’re faking it. What’s going on?' And, so, Season 30 had this darkness to it that Season 31 doesn’t have." 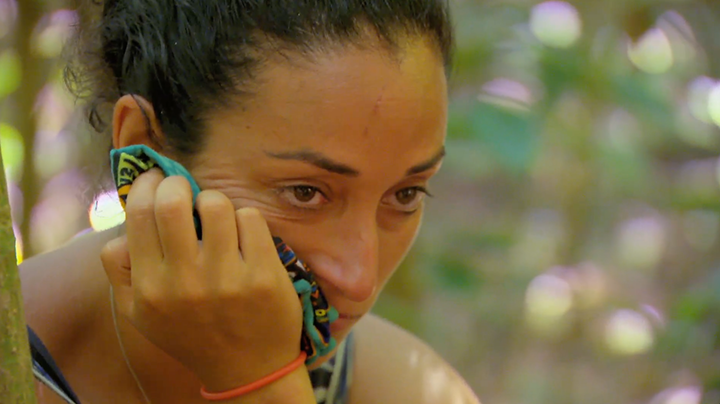 10. Would you say your first season was more emotionally taxing than your second chance?

Shirin: "That’s a hard one. In terms of the season and the people itself, yes, and not to mention, I went a lot farther.

This season was a lot more lighthearted and I didn’t face a lot of the same struggles, but because I was coming off the heels of my first season, I was a little emotionally-drained... and then having to babysit Abi and be around her all the time. But overall, it was much more lighthearted this time around." 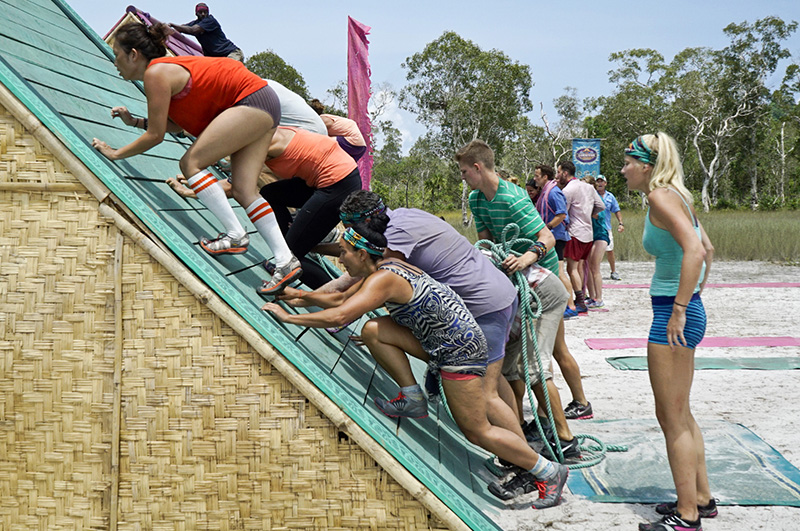 11. How has your life changed since being on Survivor?

Shirin: "It hasn’t changed a whole lot. I'm still a regular person. I’m still loving my job at Yahoo! with my boyfriend, got great friends, living in San Francisco… I think the only difference is that now, I’m a little more involved in the Survivor community. I used to just watch the show as a fan and that was it, but now I’m listening to podcasts, engaging with fans on Twitter. It’s a fun experience talking about a show that I love.

I was hanging out with Rob Cesternino the other day and, in my mind, he was always that guy from Survivor that I loved. It’s just crazy." 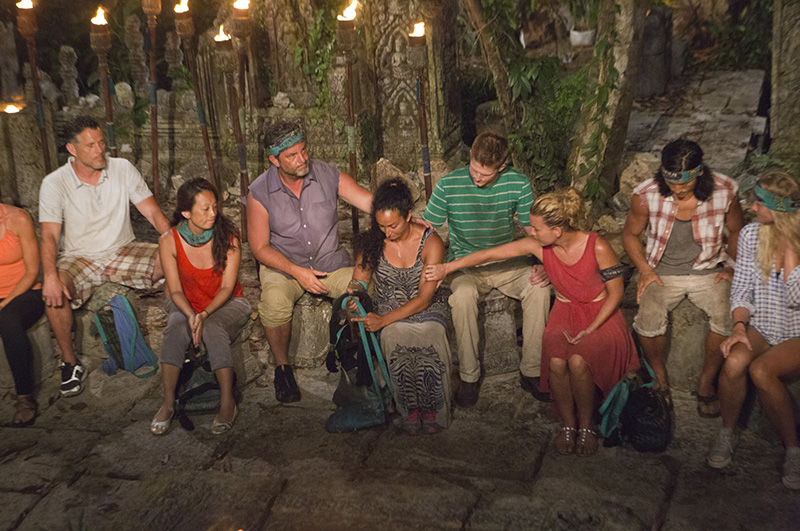 Shirin: "I’m super excited to going back to being a fan of Survivor—and for next season of the show!"