As president of the United States, Barack Obama didn't think it was appropriate to say or tweet just anything that came to mind.

Enter Luther, Obama's anger translator, played to perfection by Keegan-Michael Key. Like Obama, Luther has been laying low since Donald Trump took office. But he stopped by The Late Show on Tuesday and had a few things to get off his chest. 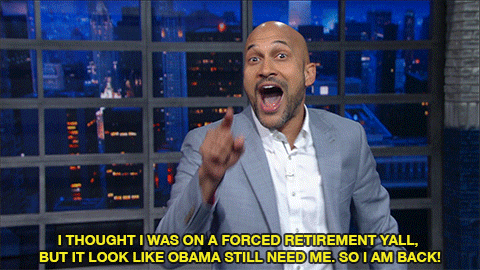 Luther's appearance happened to be during Russia Week on The Late Show, featuring the results of Stephen's trip to Moscow and St. Petersburg. You can watch Tuesday's full episode include Stephen's monologue, his conversations on the streets of St. Petersburg with ordinary Russians, and more. Throughout the week, Stephen will have nightly segments about his visit to Russia and will welcome guests including Jason Bateman, Cara Delevingne, and Muse.