The star of the new series gives the scoop on her character during an appearance on The Late Show.

There's nothing like a little hand-to-hand combat between a Klingon and a Federation officer to get Stephen Colbert excited.

Star Trek: Discovery will premiere in the U.S. on CBS All Access Sunday, Sept. 24, following a broadcast premiere on the CBS Television Network. But production has been so top secret that even The Late Show host hasn't seen it yet. Fortunately, Sonequa Martin-Green (First Officer Michael Burnham) dropped by on Wednesday and brought a clip featuring her character's intense encounter with a Klingon.

Sonequa shared a number of details about the new series, which is set about 10 years before Captain Kirk's five-year mission. She also demonstrated the perfect Vulcan salute, which she had to get down pat since her character is related to Spock. Sonequa and Stephen also spoke about what America could learn from Star Trek these days, and how filming for such an iconic franchise leads to some unusual encounters—like meeting actual royalty on set. 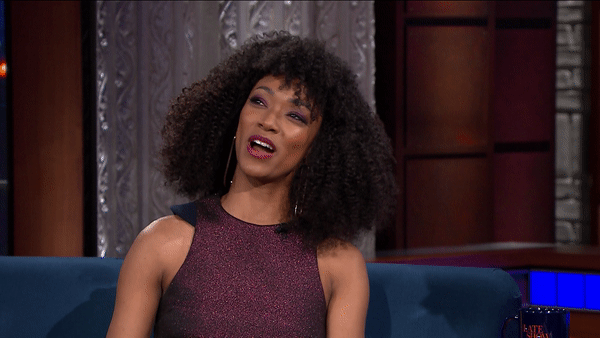 Can't wait for more from the new series?

Star Trek: Discovery will premiere in the U.S. on CBS All Access Sunday, Sept. 24, following a broadcast premiere on the CBS Television Network.