Eli Gold Vs. Ruth Eastman: Who Will Control The Florrick Campaign? 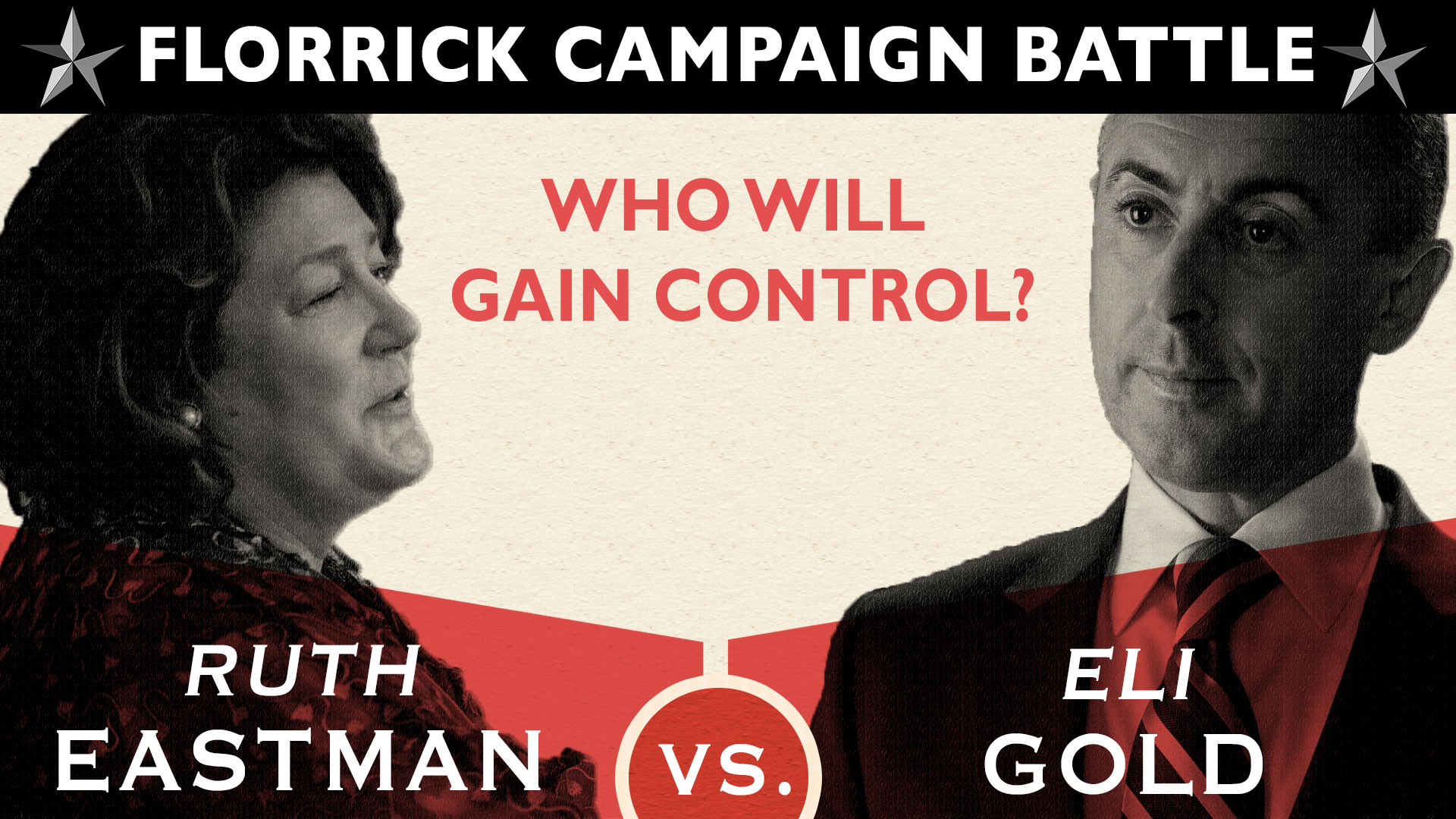 Eli Vs. Ruth: Welcome To The Main Event!

Stepping into the ring is Ms. Ruth Eastman, a high-profile presidential campaign strategist who will be leading Peter Florrick's race to the White House. In the other corner is Mr. Eli Gold, Peter's long-time, quick-witted sidekick, friend, and past campaign manager.

This season, the king and queen of campaign strategy will go toe-to-toe in the ring for the Battle of the Florricks. We're talking about a lot of intellectual muscle in a tight space! Who will gain control? Let's take a look at the first few rounds... 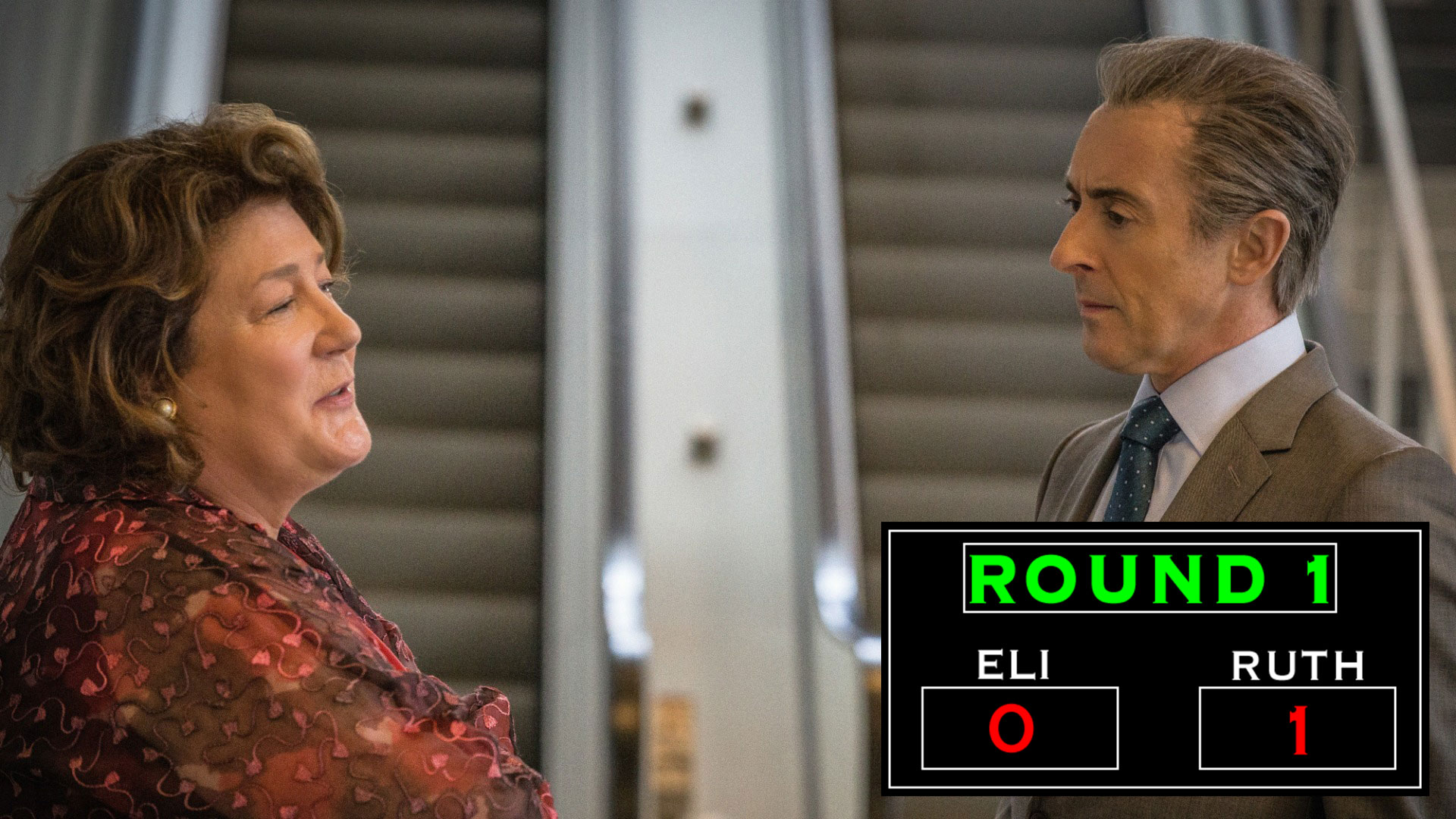 Winner: Ruth
Why: She not only took Eli's job—she and Peter played it to look like it was Eli's idea.

After chasing down Ruth Eastman and begging her to consider meeting with Peter Florrick to discuss representing him for the upcoming presidential election, Eli Gold returned to Peter's office only to discover that she was already there.

Turns out, Florrick had spoken to her before and, upon Gold's return, told his longtime advisor that Eastman was taking the reigns. After supporting Peter through years of scandals and encouraging him to run in the first place, Gold quit on the spot.

Knockout Quote: "I got you here! You wouldn’t be here without me. When you were polling nothing, when you were banging your freakin' ethics coordinator, I stuck by you!" - Eli Gold 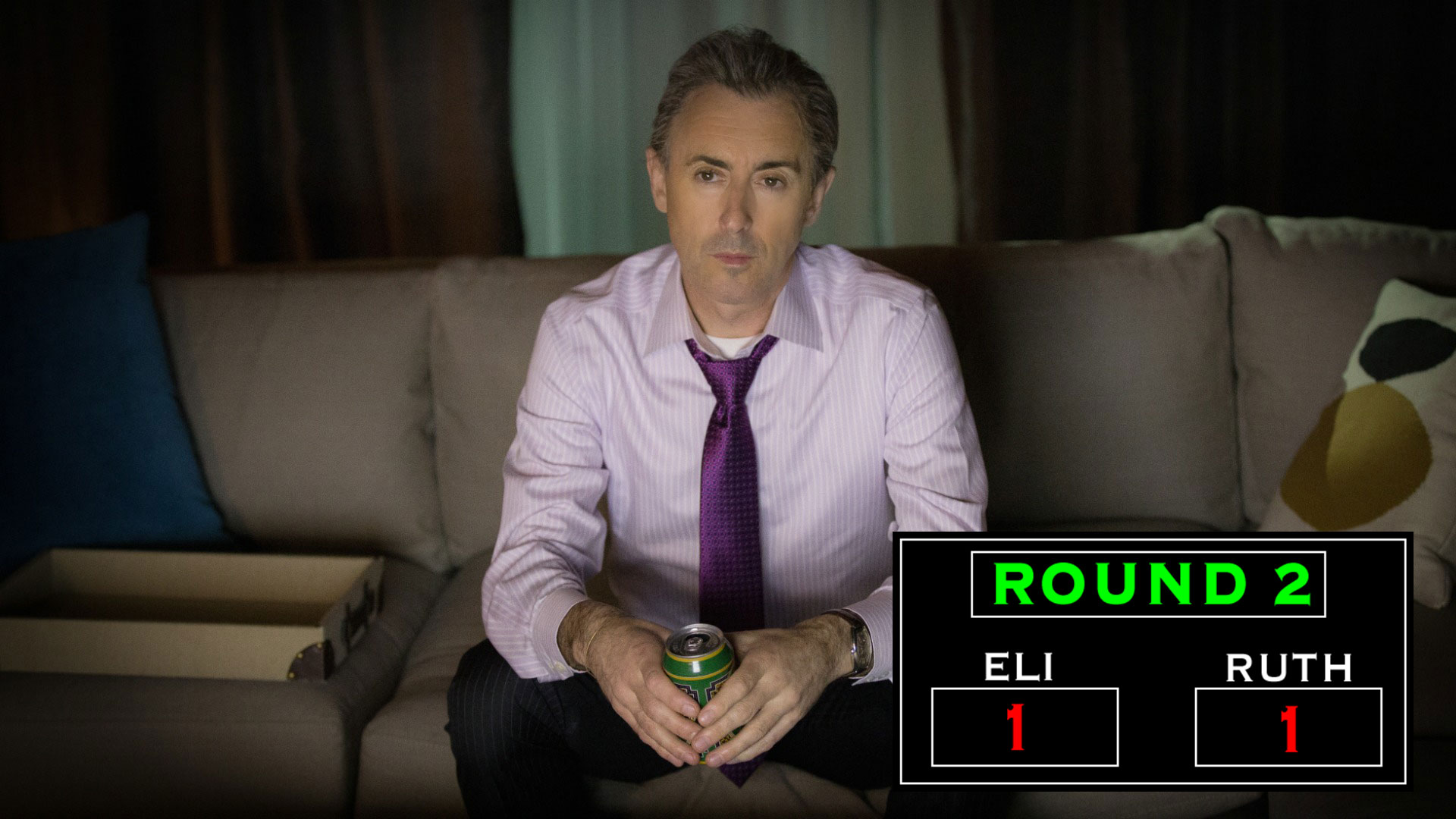 Round Two: The Fight For Alicia

Winner: Eli
Why: Eli may have split with Peter Florrick's presidential campaign, but he did nab a coveted position as Alicia's chief of staff.

After hearing that Eli quit, Alicia visited his apartment. He made some rude comments out of anger, but later tracked her down to apologize. After being forgiven, he asked Alicia to consider him for her chief of staff position, pointing out that Eastman would try to "rehabilitate" her image.

Later, Ruth Eastman offered Alicia a ride to court—an obvious ploy to get the presidential hopeful's wife under her thumb. She told Alicia that rehabilitating her image is a part of the grand plan. Not one to cave, Alicia informed Ruth that Eli would be acting as her chief of staff.

Knockout Quote:
Ruth Eastman: "That won’t work, it’s too soon. I’d like you to meet a few other options."
Alicia Florrick: "No, I’m good with Eli." 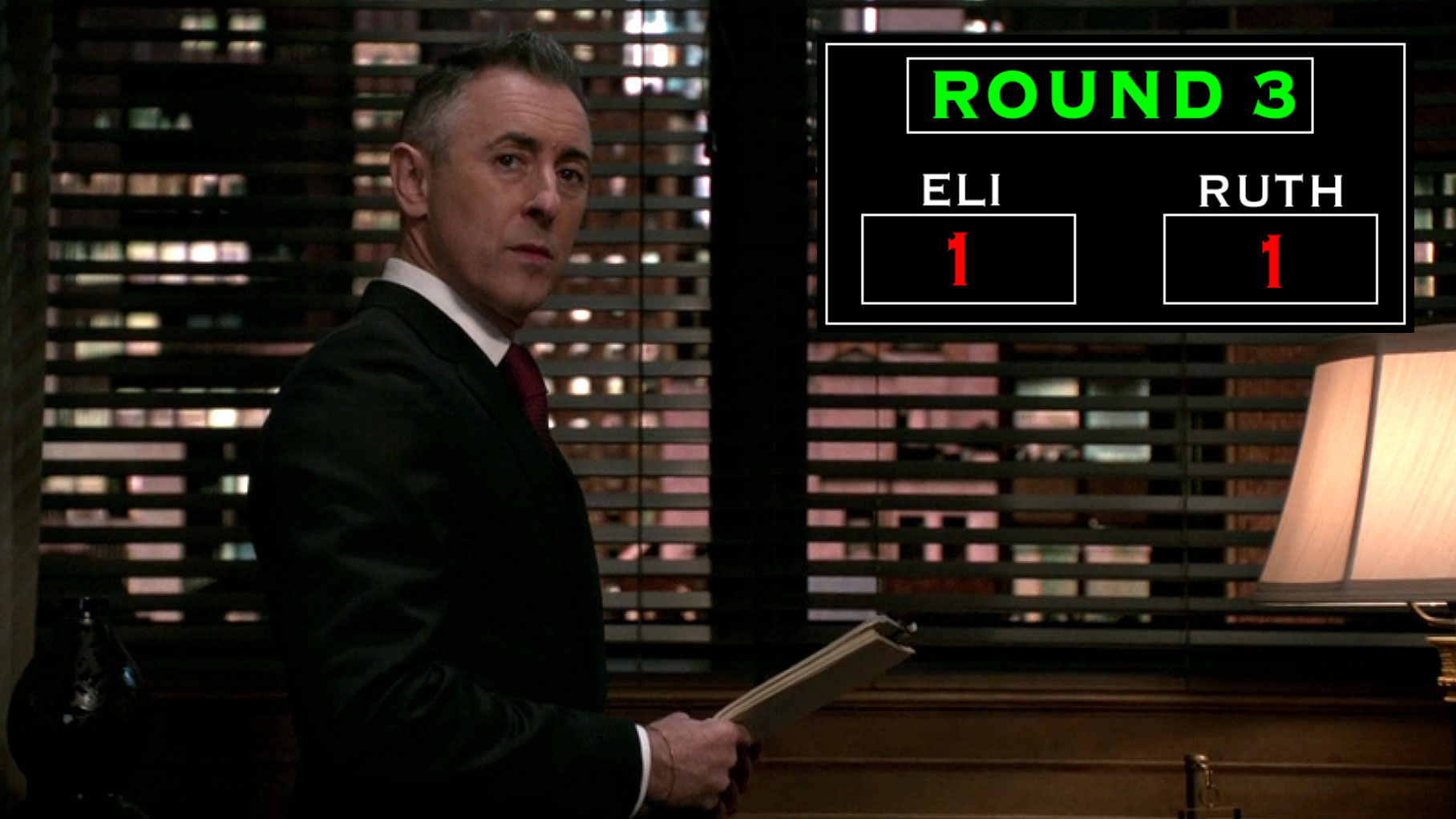 Round Three: Blows Thrown At The Florrick Office

Winner: Tie
Why: Ruth is the force behind Peter, but Eli is now behind Alicia.

After her conversation with Alicia Florrick, Ruth went to Eli's office to tell him to step down as her chief of staff. When he refused, she upped the ante by threatening to have Peter Florrick amend her contract to stipulate that she would be the one to choose Alicia’s chief of staff.

Knockout Quote:
"You and I don’t have time to tell each other lies, so let’s not. I plan to use Alicia’s rehabilitation campaign to undercut you and, eventually, destroy you." - Eli Gold 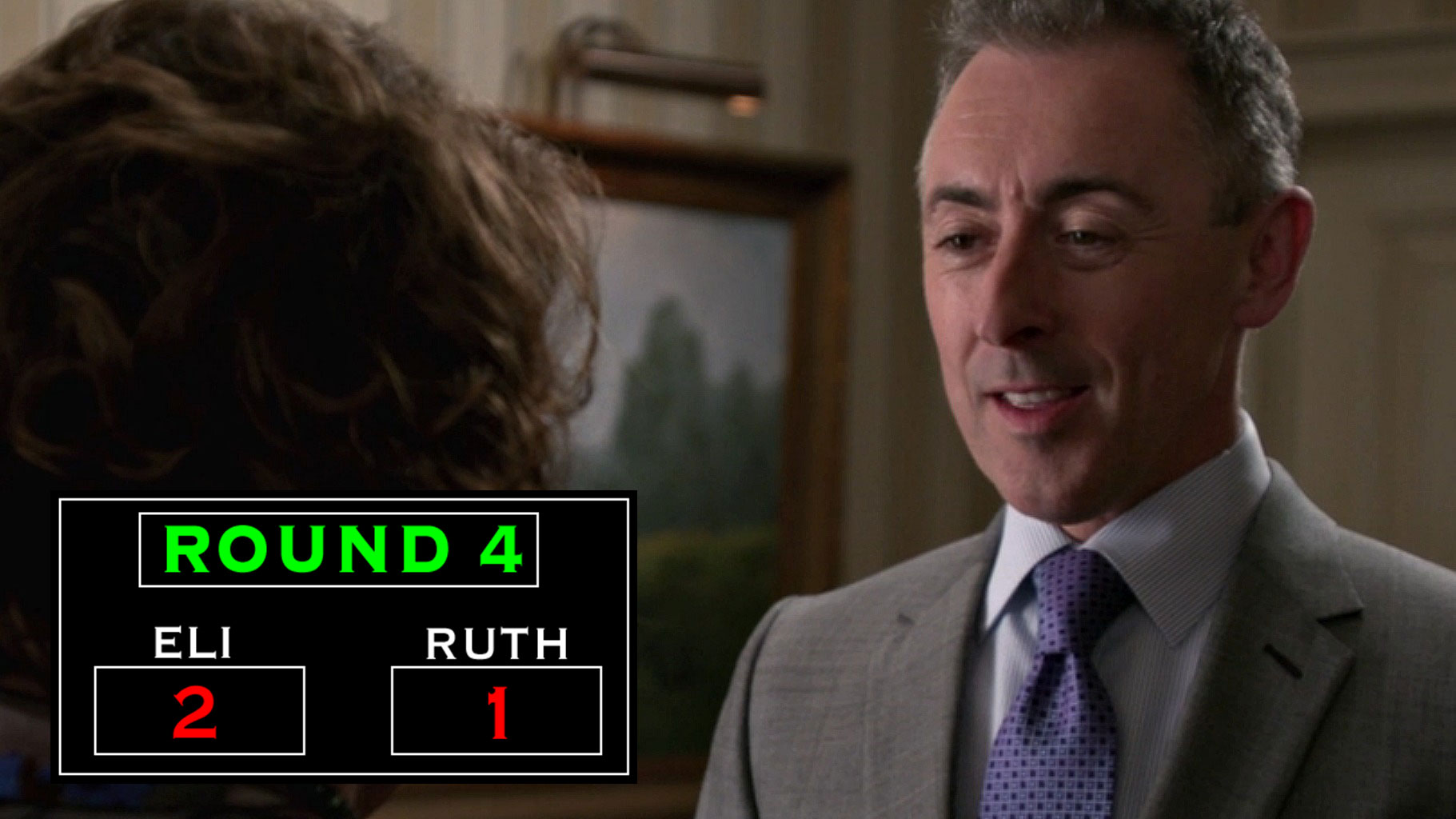 Round Four: Eli Hits A Nerve

Winner: Eli
Why: If Eli wasn't getting under Ruth's skin, she wouldn't be making threats.

Eli returned to Peter’s office with an apology for his attitude after he found out Ruth would be replacing him. He made it clear to Peter that he understood there was no longer room on the campaign, and the two men shook hands.

On his way out of the building, Ruth had a few words for Eli. All fake smiles aside, Ruth— in no uncertain terms—threatened to ruin Eli's life if he came near Peter again.

Knockout Quote:
"If you speak to my client again, I will destroy you and all those who you hold dear." - Ruth Eastman 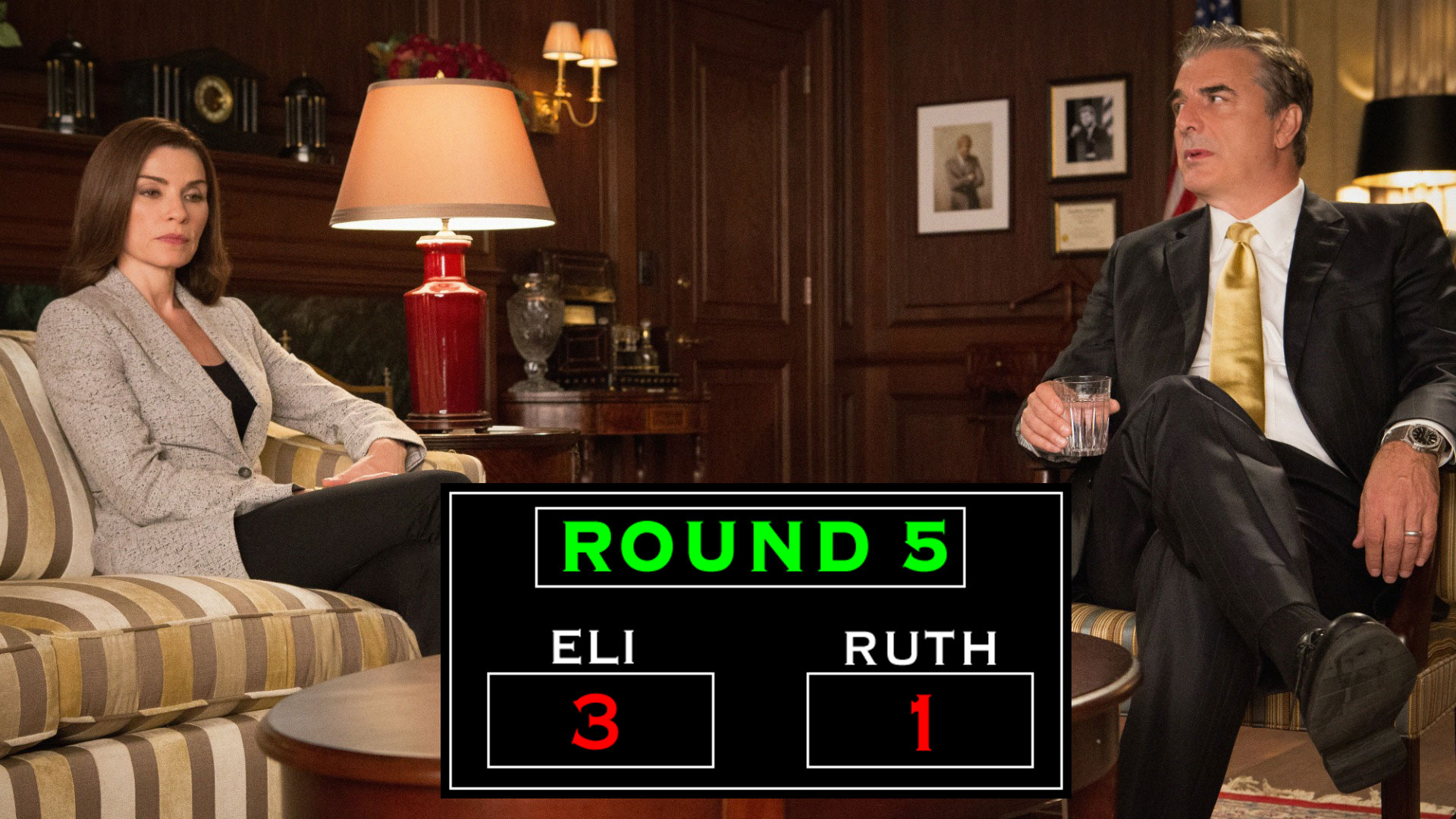 Round Five: The Florricks Fight

Winner: Eli
Why: While an inadvertent win, a W is a W. With Alicia in his corner, Eli is able to maintain his position.

Alicia visited Peter in his office, where he told her about Ruth's plans to follow her around with a camera crew as part of an effort to recast her "image." He also said that Eli had to go, because Peter needs Ruth and those were her orders. Instead of capitulating, Alicia doubled down by reminding her husband that he needed her, too. After pointing out that Peter needed the public to see that he has a family that will continue to stand by him, he conceded, saying, "Eli is all yours."

Knockout Quote:
"You need me and I won’t stand without him." - Alicia Florrick 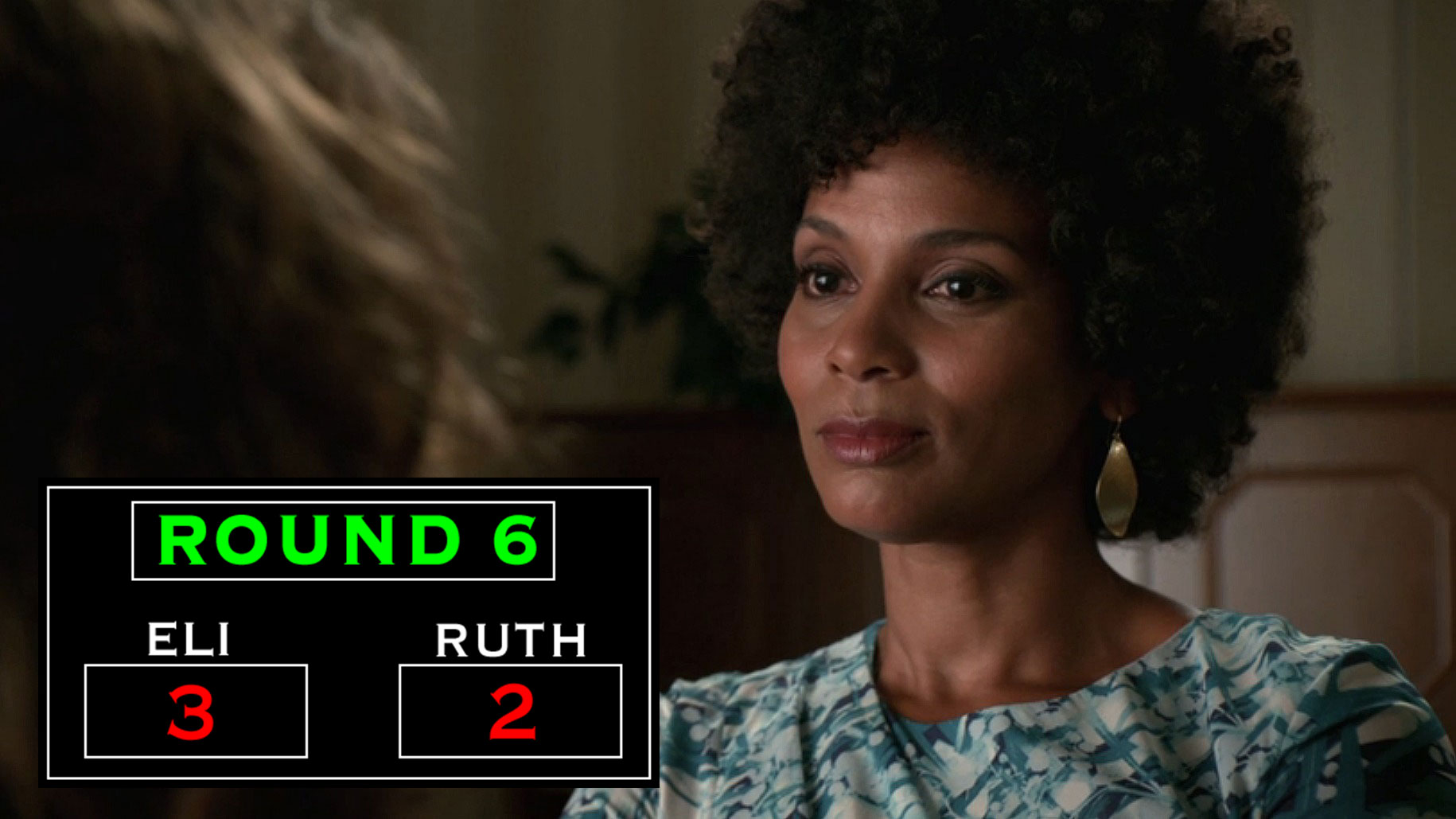 Round Six: Ruth Finds A Gatekeeper

Winner: Ruth
Why: By convincing Nora to act as a spy, she can gain intel into Eli's campaign strategy.

Ruth convinced Nora to become Eli’s assistant—but to report back on everything he does. It appeared to work. Nora approached Eli while he was waiting for Alicia outside of a meeting to tell him that, because she doesn’t like Ruth, she now wants to work for him. 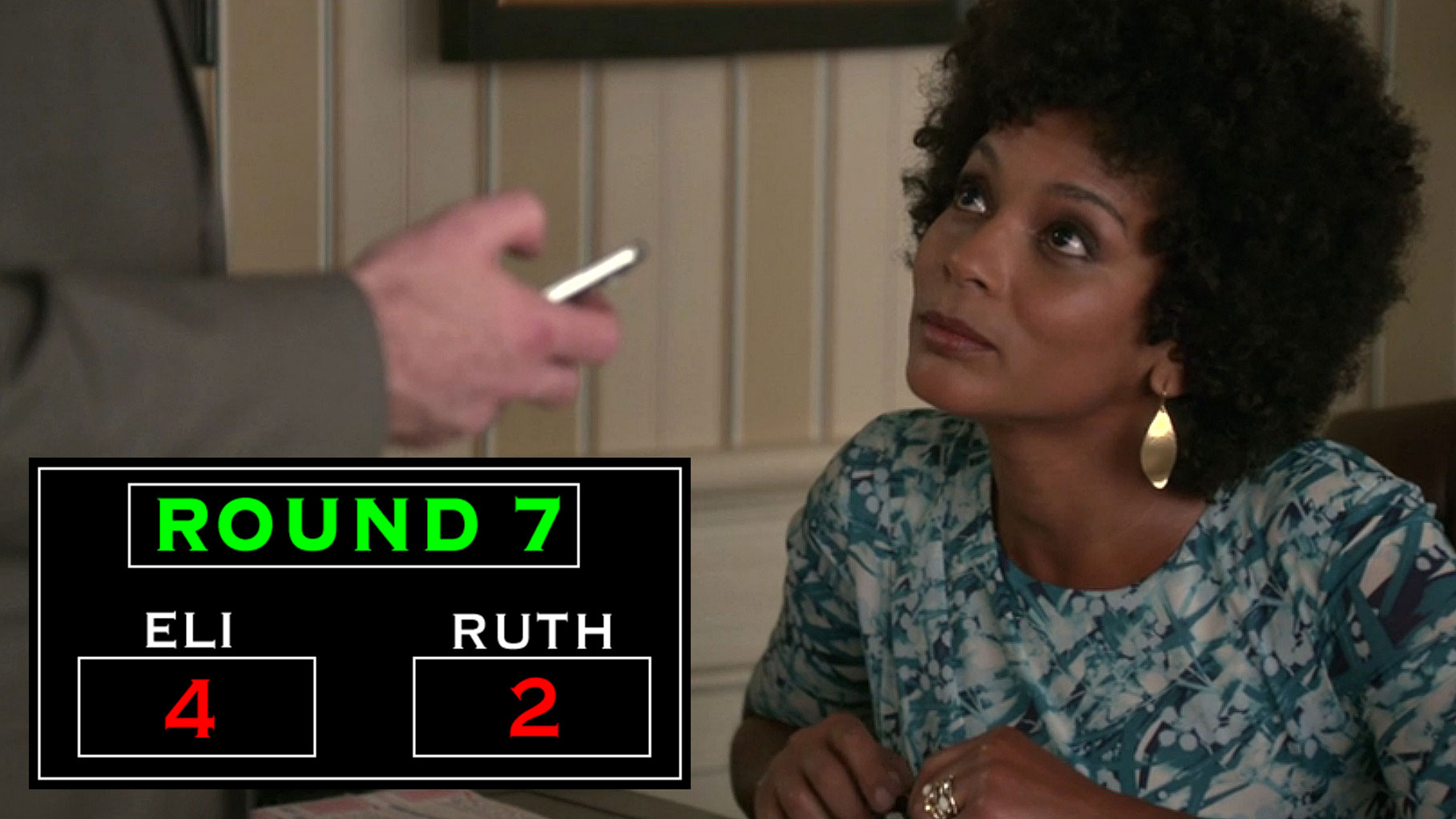 Winner: Eli
Why: Though Ruth convinced Nora to be her eyes and ears, the second her back was turned, Nora confessed to Eli.

While in Peter's office speaking to Nora, Ruth popped her head in to say she has total control over Alicia’s public persona—and that Eli is on "probation." After leaving, Nora leaned over and whispered to Eli about her deal with Ruth.

Knockout Quote:
"Eli! I’m supposed to keep tabs on your for Ms. Eastman, tell her everything you're doing." - Nora 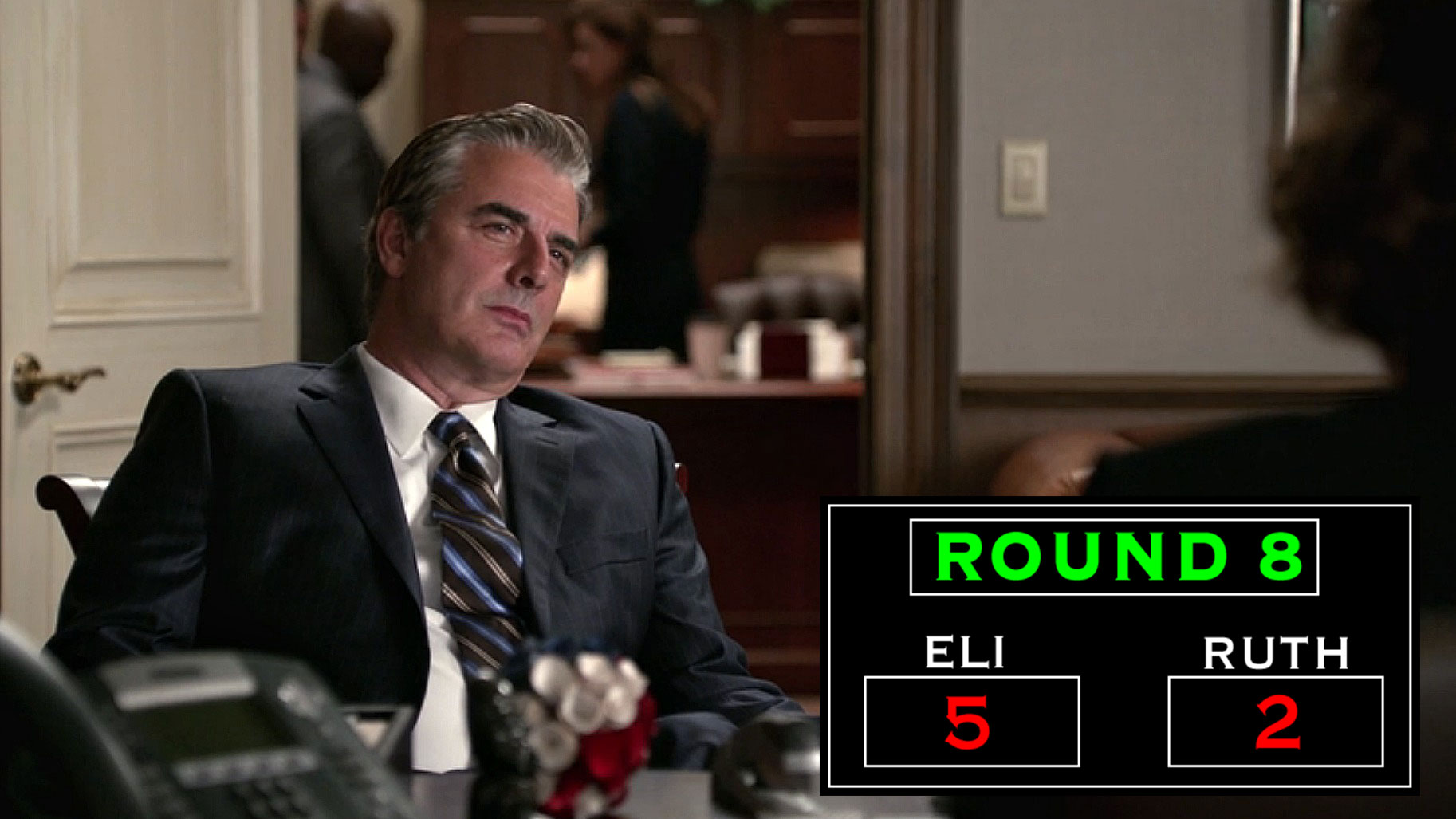 Winner: Eli
Why: Not only did Eli make a successful move for Alicia's career, he got Peter's attention and a hat-tip from Ruth.

After hearing that Eli had secured an endorsement from Frank Landau and a post on the election board for Alicia (the very board that found her guilty of voter fraud last season), Peter asked Ruth to call Eli and compliment him on his brilliant political move. 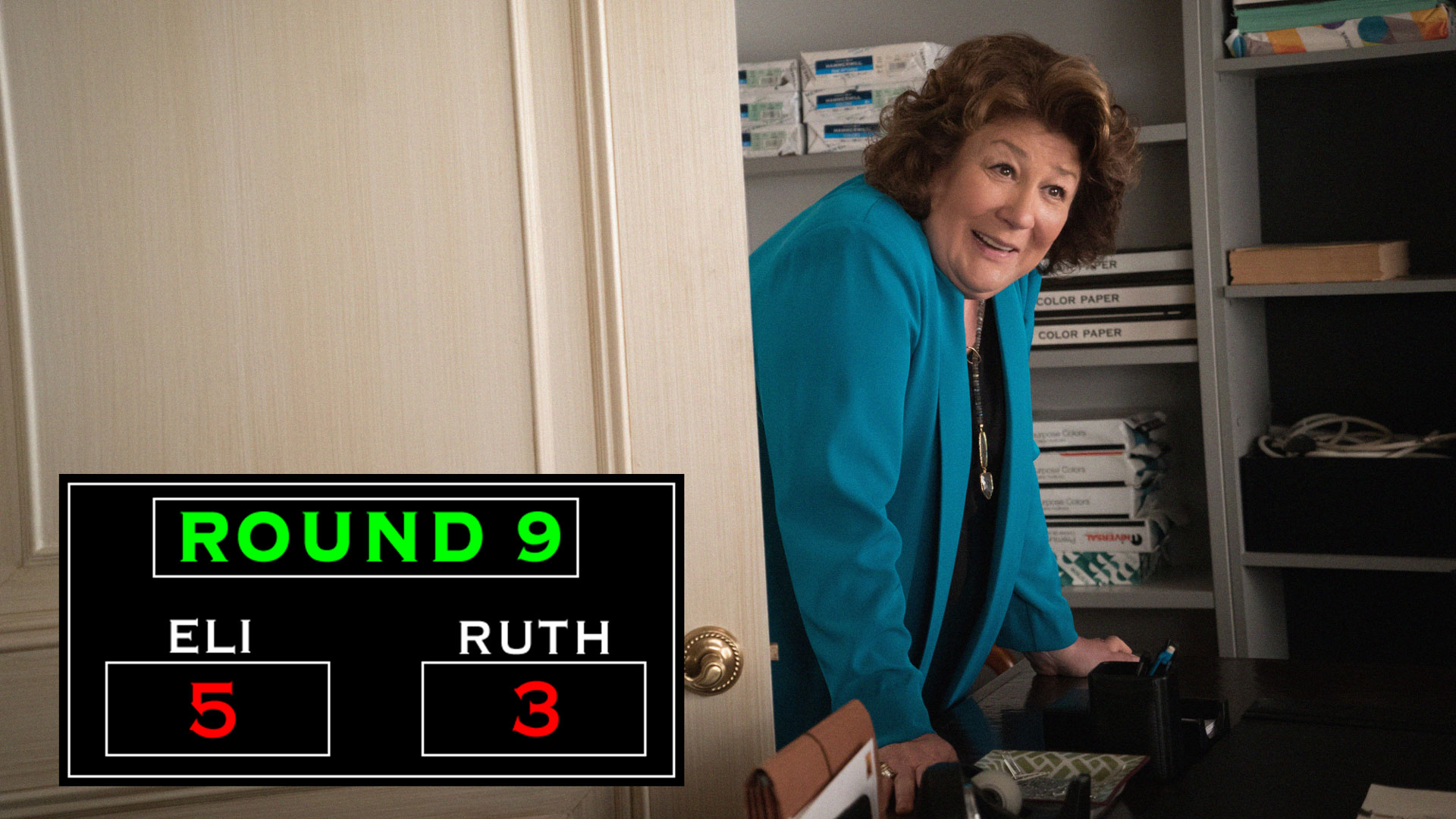 Round Nine: Ruth Puts Eli On The Ropes

Winner: Ruth
Why: Not only did she provide Eli with the world's smallest office, she gets to keep him on an even tighter leash.

After telling Eli the wrong time for Peter’s committee so that he'd show up late, Ruth insisted on him working in-house. Eli pointed out that Ruth had taken over his office, but she knew that was coming and provided him with a new office—err—more like a new closet. 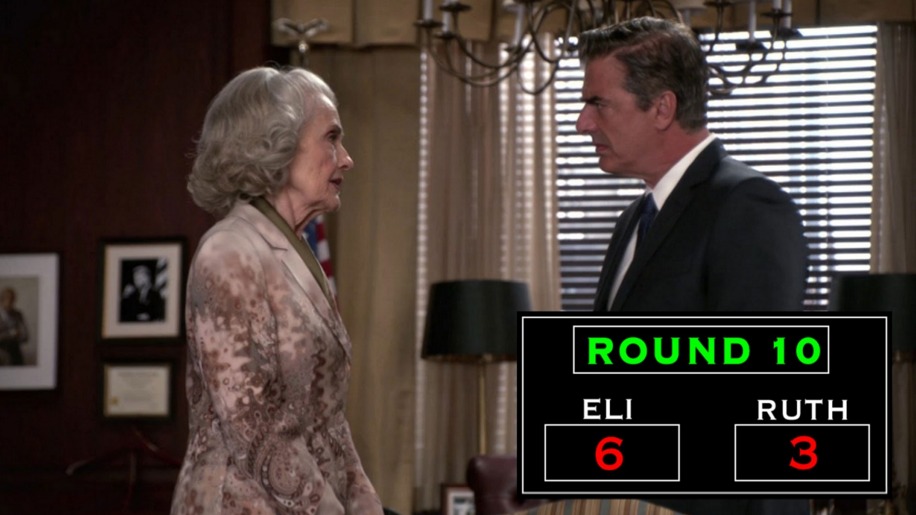 Round 10: Eli Pulls Peter's Family Into The Mix

Winner: Eli
Why: Knowing that only Peter’s family could take priority over his campaign, Eli capitalized on the upcoming vote on physician assisted suicide by getting Grace and Jackie involved. After Ruth barred Jackie from entering a staff meeting, Peter’s mother shared her dislike for the her son’s new chief of staff.

Knockout Quote:
“Your campaign manager, Ms. Eastman, is not serving you well and she’s disrespecting me." - Jackie Florrick 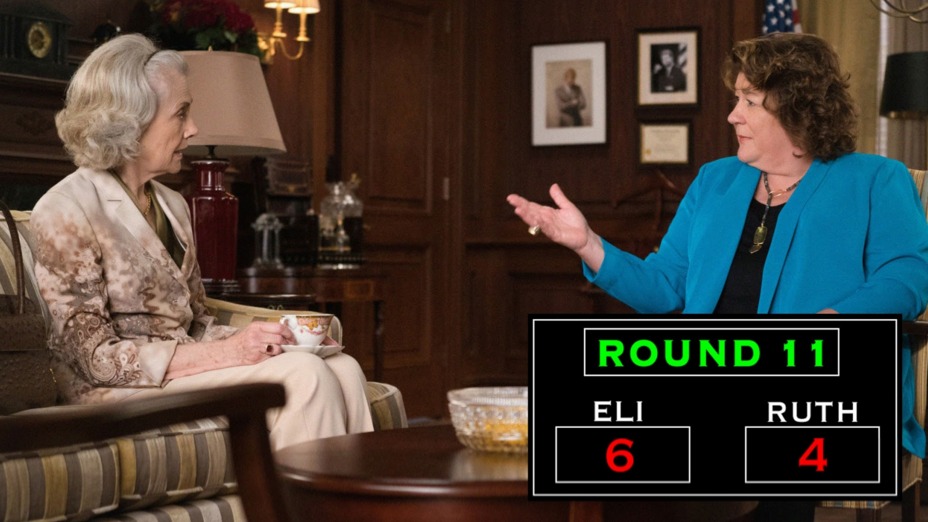 Round 11: Ruth Brings The Family Under Her Wing

Winner: Ruth
Why: Ruth won’t be played for a fool. After both Jackie and Grace came into the office to see Peter in a short amount of time, Ruth figured out that Eli was behind the visits. In order to counteract any negative feelings, Ruth took time to sit down with both Peter’s mother and daughter—ensuring them that they were both essential to the campaign.

Knockout Quote:
“You’re always going to have your boy’s ear, Ms. Florrick, and I promise you, you’ll always have mine, too.” - Ruth Eastman 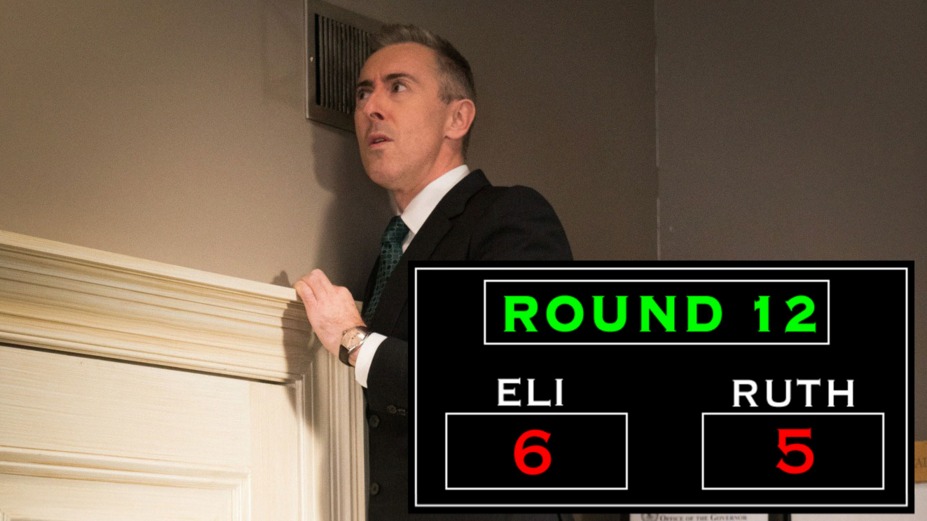 Round 12: Eli Tries To Turn Peter's Loss Into His Own Win

Winner: Ruth
Why: While traveling to Iowa to shake hands and kiss babies, Peter used Ruth’s strategy to talk about cutting back pensions—a strategy that did not go over well. When Peter returned to his Illinois office, he gave Ruth a piece of his mind. Eli stacked up just about everything in his office so he could eavesdrop on the conversation through the heating vents. Seeing an opportunity to get his foot back in the door, Eli rushed over to offer his assistance. To his dismay, he arrived just in time to see Ruth handing Peter the latest polls—showing that he’d just made big gains. 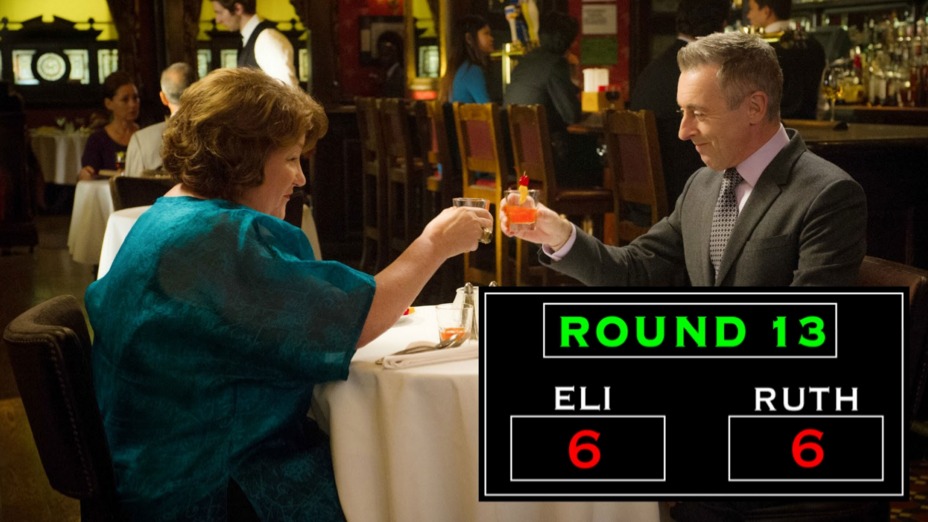 Round 13: Ruth Extends An Olive Branch In The Form Of An Alabama Slammer

Winner: Ruth
Why: Ruth invited Eli to a restaurant under the guise that it was going to be a full staff meeting. Eli was suspicious from the start—lying to her about his family background. His deceit was fruitless because Ruth had already done an extensive background check—and made it clear that Eli could either get with the program or get out.

Knockout Quote:
“You’re a new tree in my forest. I want to know more about that tree. That’s all. Because, unless I chop it down, that tree is now a part of my life." - Ruth Eastman 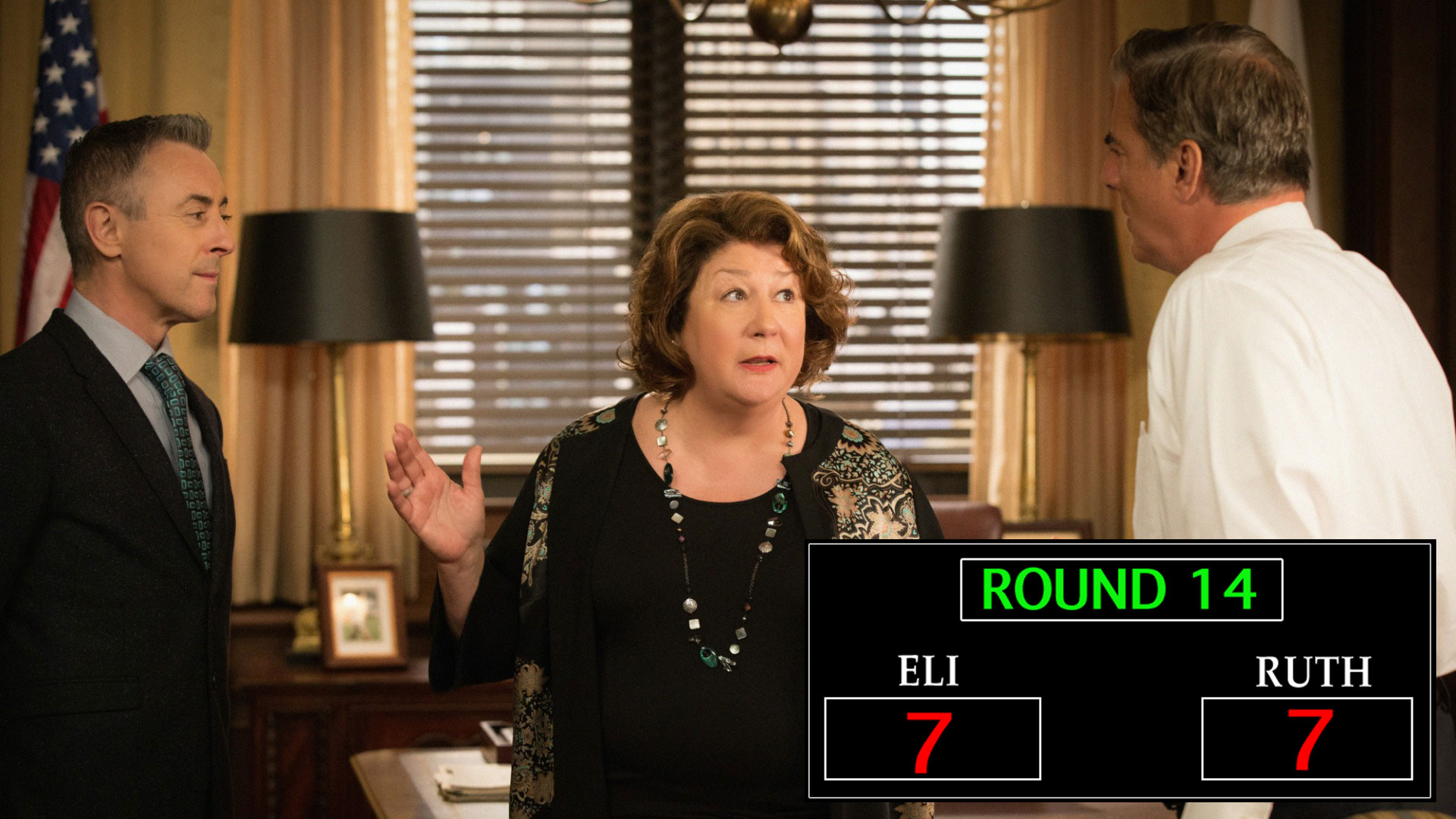 Round 14: Angling For An Introduction

Winner: Tie
Why: Eli and Ruth both use Democratic Committee Chairman Frank Landau as a pawn, maneuvering and countering one another until it becomes clear that Landau is so shady, neither of them will come out on top.

Knockout Quote:
"Sometimes, to stop the cancer, you have to endanger the patient." - Eli Gold 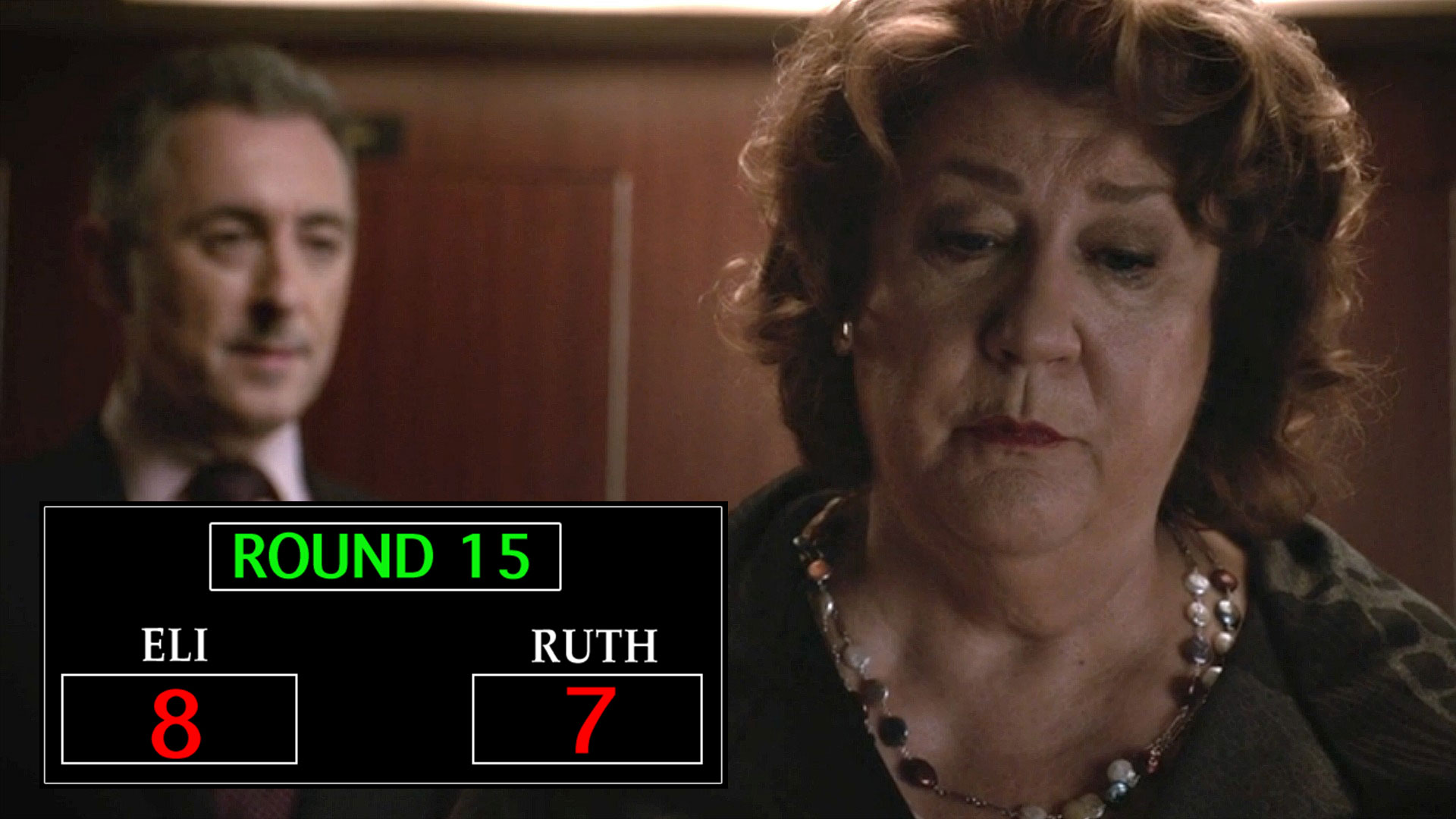 Winner: Eli
Why: In a bold move, Ruth pushes the campaign to do the "Full Grassley" in order to make the nightly news and, hopefully, make a strong showing in the Iowa Caucuses. While the Florrick bus did reach all 99 counties in the state, Peter won a mere 4—far behind the front runners.

Knockout Quote:
Eli Gold: You overreached. You sweet talked Peter, convinced him that he could win the presidency. You attacked the frontrunner and ended up alienating voters.
Ruth Eastman: I don't need the Monday morning quarterbacking, Eli. I did exactly as you would have: follow the polling data.
Eli: For any other candidate? Yes. But not this one. You were with him 24/7 for months and you missed the most fundamental thing about the man. Peter Florrick is not number one, not nationally. She is.
Ruth: Yes, Eli, we all know Hillary Rodham Clinton is a giant.
Eli: No, not Hillary. Alicia.