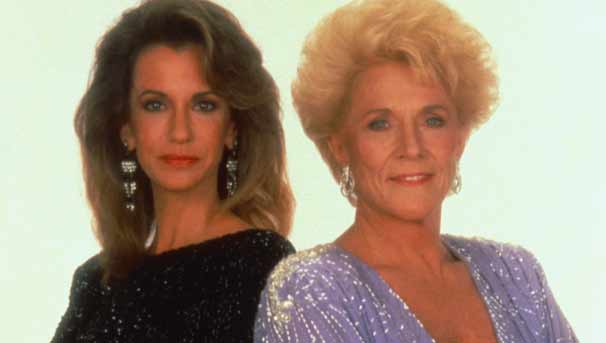 The Feud: Katherine vs. Jill

Katherine vs. Jill The ongoing feud between Katherine Chancellor and Jill Foster Abbott sets a record as daytime's longest rivalry. For nearly 27 years, these two women have been constantly getting in the way of the each other's happiness. Whether it's over men, money, or the custody of a child, Katherine and Jill are always in direct competition. In the beginning, the relationship between Jill and Katherine was amiable and without problems. Jill was a struggling teenager working in the beauty salon that Kay Chancellor frequently attended. At the time, Kay was having problems with her alcoholism and her marriage and Jill proved to be a great listener. She enjoyed Jill's company so much that she hired her as her personal assistant. The move from rags to riches was a dream come true for Jill and she spent practically all her time at the Chancellor Estate. Jill had good intentions and tried to help Katherine with her failing marriage to Phillip. Katherine's incessant drinking and smoking, however, continued to drive him away. Jill started spending more time with Phillip and the two eventually fell in love. In time, Katherine grew suspicious of Jill's involvement with Philip and in an attempt to protect her marriage, she introduced Jill to her handsome son Brock. At first, the pairing seemed to solve Kay's problem. The two supported Kay through her withdrawal and 12-step program with Alcoholics Anonymous. Jill still had feelings for Phillip however and was plagued with guilt because of her illicit affair. She knew that a relationship with Phillip was impossible and she finally resorted to marrying Brock. When Jill learned she was carrying Phillip's love child, however, the marriage ended and the affair was exposed. With intentions of marrying Jill, Phillip flew to the Dominican Republic to get a quick divorce from Katherine. She picked him up from the airport and desperately tried to convince him not to go through with marrying Jill. When he refused, Katherine lost control of the car and drove it off a cliff. Phillip was critically injured and married Jill from his death bed. He passed away and shortly thereafter, Jill gave birth to Phillip Chancellor III. By this time, Katherine and Jill were mortal enemies. Katherine attempted to â€œbuyâ€ baby Phillip for one million dollars but Jill refused. Jill attempted to sue Katherine for her fortune but lawyer Mitchell Sherman declared Jill's marriage illegal because Katherine had signed the divorce paper while intoxicated. The women continued to go at each other's throats until the next challenge presented itself in Derek Thurston. Jill fell madly in love with handsome cosmetologist, Derek Thurston. She hoped to marry him and share in his dream to open a beauty salon called The Golden Comb. Katherine, however, was determined to come between the happy couple. She lured Derek in with her money and married him to spite Jill. Katherine grew to truly love him but eventually accepted the fact he didn't reciprocate her feelings. When Katherine was committed to Fairview Sanitarium (from drugged chocolate), Jill seized the opportunity to steal back Derek. She celebrated sweet victory over Katherine when Derek proposed and they married. Katherine, however, faked her own death to escape the sanitarium and stole her husband back! Feeling outdone and tired of waiting for Derek to return, Jill turned her attention to Katherine's friend, John Abbott. Jill started to work at Jabot Cosmetics and entered a close working relationship with John. The two eventually fell in love and tied the knot. Katherine kept a close eye on the relationship waiting for the right opportunity to meddle. Jill had an illicit affair with John's son Jack and Lindsey Wells blackmailed her with compromising photographs of the couple. Lindsey sold the negatives to Katherine who used them to destroy Jill's marriage. She sent a photo of Jack and Jill, in puzzle form, to John. When he finally pieced it all together, he suffered a stroke from the shock and divorced Jill. The next battle the women faced was in the courtroom, where they fought for custody of Phillip III. All the sordid details of Phillip's birth and his father's death were exposed and, in the end, Katherine was awarded temporary custody without the right to adopt.

Through the years of feuding, there were only two brief moments when a truce was called. In one instance, two joined forces to dissuade Phillip from marrying Nina Webster. In a second, Jill came to Katherine's side when she was diagnosed with breast cancer. Phillip eventually married and Katherine received a clean bill of health allowing them to continue doing what they did best -- hate one another. In an effort to fool and humiliate Katherine, Jill paid a homeless man she found in the park to seduce her enemy. She gave the unknown stranger (Brian Romalotti) the name Rex Sterling and sent him to Katherine's door. Katherine and Rex fell in love and, even when she discovered his true identity and original motives, the happy couple married. Disappointed by the outcome of her plan, Jill began to work her feminine wiles on the unsuspecting Rex. When Katherine was kidnapped and replaced by an impostor (Marge), Jill seduced Rex. When the real Katherine returned, she was horrified to learn that Jill and Rex had married. Katherine had the marriage declared illegal and told John about Jill's involvement with Rex. Jill still loved John and hoped the two could one day reconcile. In the end, the two enemies reluctantly joined forces in order to get their respective man; Katherine remarried Rex and Jill eventually remarried John. Although Katherine and Jill were always involved in each other's business, the next big clash concerned the ownership of the Chancellor Estate. After her second divorce from John, Jill moved back to Katherine's house. While searching in the attic, she found proof that Phillip had intended her to inherit Chancellor Estate. She immediately sued Katherine and was awarded ownership. Under the same roof, Katherine and Jill were constantly butting heads. The tension at the estate eventually pushed Katherine over the edge. She contemplated drinking and suicide to escape her living situation. She moved out on the streets and was reunited with her granddaughter, Mackenzie, in the process. Katherine notified her son (and Mac's father) Brock and he returned to Genoa City. Most recently, Brock, Mackenzie, and Katherine have all moved back to Chancellor Estate. Half owner Jill still lives there as well, and the feud lives on.