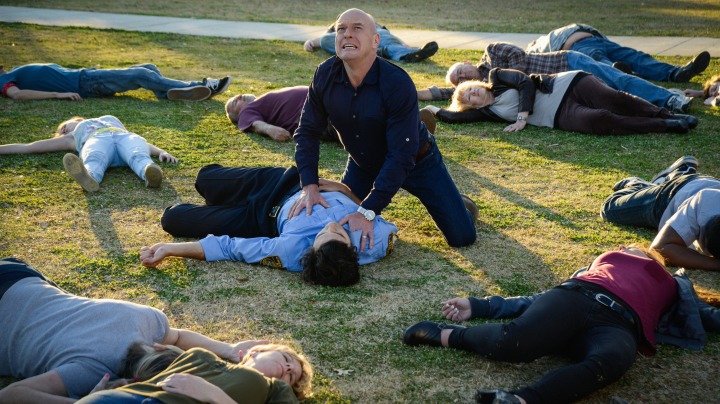 When a strange power surge caused most of the town to collapse.

After a bizarre magnetic force destroyed buildings and vehicles, the people of Chester’s Mill mysteriously fell unconscious. In order to save his son, Big Jim did something completely out of character by nearly taking his own life.

Thankfully, Julia arrived at the scene and stopped Big Jim’s suicide attempt, reminding him that the Dome doesn’t want more bloodshed. Immediately after she said that, the force field vanished and everyone regained consciousness. 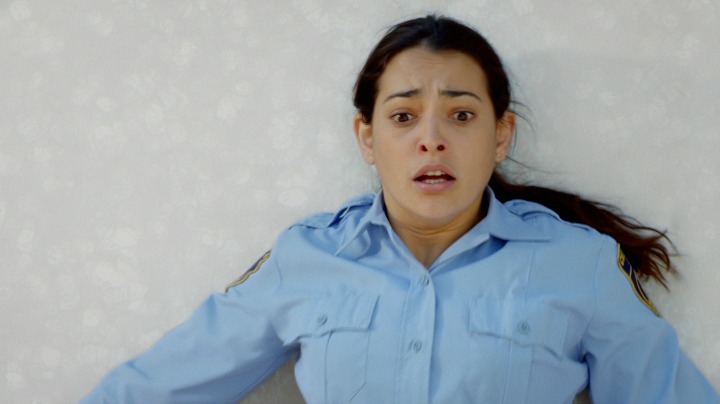 When Linda sacrificed her own life to save Barbie’s.

Linda may have made some bad decisions in the past—becoming Big Jim’s sidekick isn’t really the greatest way to make friends—but she redeemed herself in the end when she died protecting Barbie. By selflessly pushing Barbie out of the way of an oncoming SUV, Linda reminded Chester’s Mill that courage and selflessness would be the traits that ultimately define them, even in the worst of times. 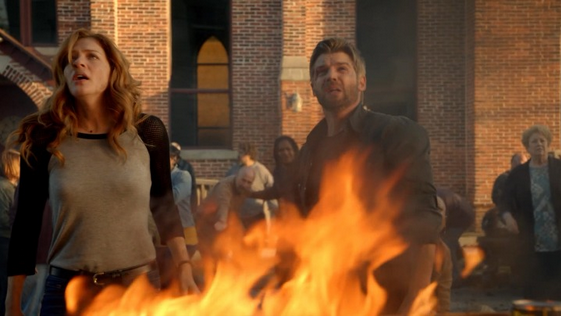 When they stuck together, even when their food supply went up in flames.

Life under the Dome was becoming increasingly difficult. Deaths and murders haunted Chester’s Mill and spontaneous climate changes kept them anxious about what could happen next. But something else was starting to concern them as well; their food supply was running low.

Weeks of living under the Dome meant Chester’s Mill was blocked off from trade and nearby resources. If they wanted to survive for another few months, they’d need to start conserving the food they had.

Under Julia’s lead, the town organized a food bank, and everyone pitched in by donating non-perishable items. However, their charity was short-lived when an explosion in the food bank caused the provisions to go up in flames. While most people would lose all hope in that situation, Chester’s Mill stuck together to salvage what food remained. Their efforts were rewarded when Andrea revealed that she had an entire basement filled with non-perishable items and cooked up a massive meal for all. 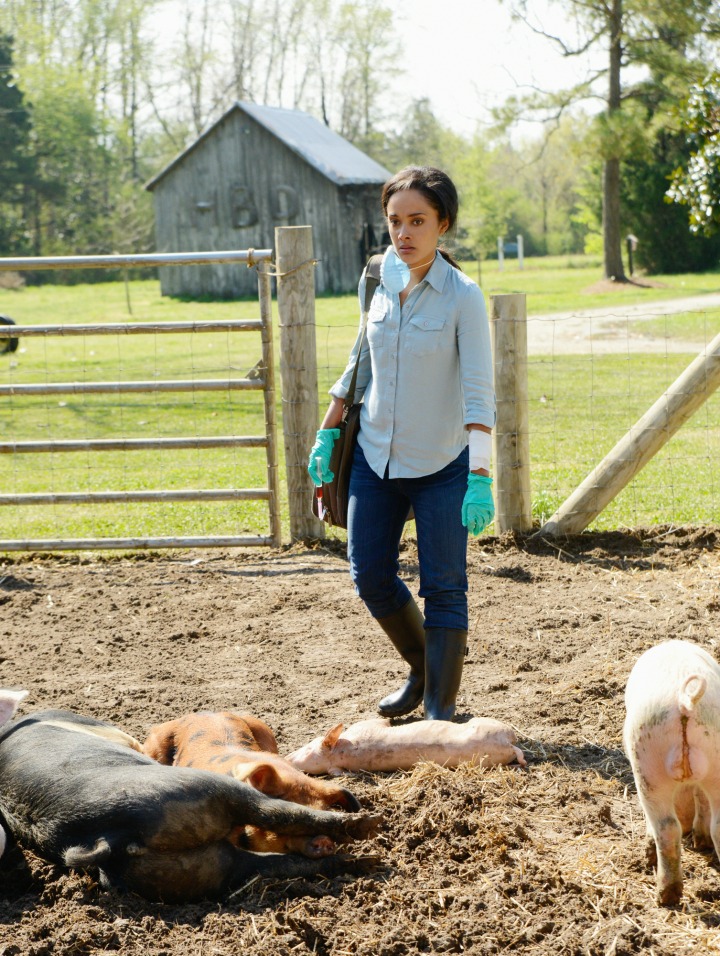 When Rebecca and Big Jim decided not to infect the entire town with a pig virus.

As food supplies dwindled, so did Rebecca’s patience. She knew that in order to preserve enough resources for everyone in Chester’s Mill, they’d have to “thin the herd.” Of course, they’d need to make these deaths seem random and accidental in order to maintain the town’s trust.

While visiting a local pig farm, Rebecca learned that some of the animals had been infected with a virus and were unexpectedly dropping dead. Instead of being concerned about the diminishing livestock, Rebecca saw an opportunity and devised a plan to use that same strain to pick off the weaker citizens of Chester’s Mill.

After discovering the pig virus had mutated, Rebecca decided to spare the weaker citizens their lives and abandon her Darwin-inspired plan. For once, the pragmatic scientist put aside numbers and equations and relied solely on her emotions. 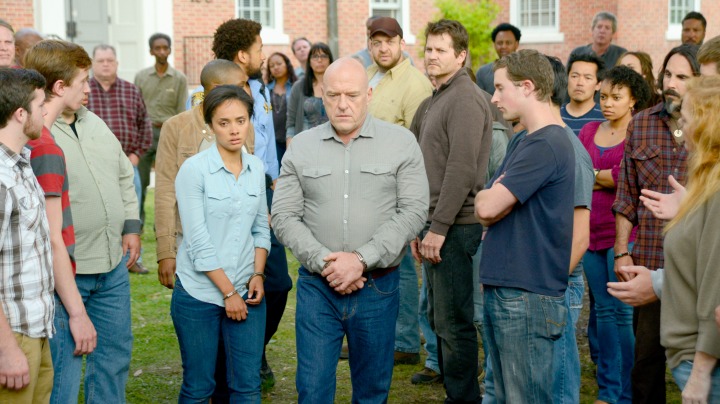 And when the town forgave them for plotting to kill everyone.

Learning that the two people you trusted most to protect your town were actually plotting to kill people wouldn’t be easy. Forgiving those same two people would be even harder. Yet, the townsfolk accepted Big Jim and Rebecca back into their lives and even granted them the opportunity to redeem themselves. 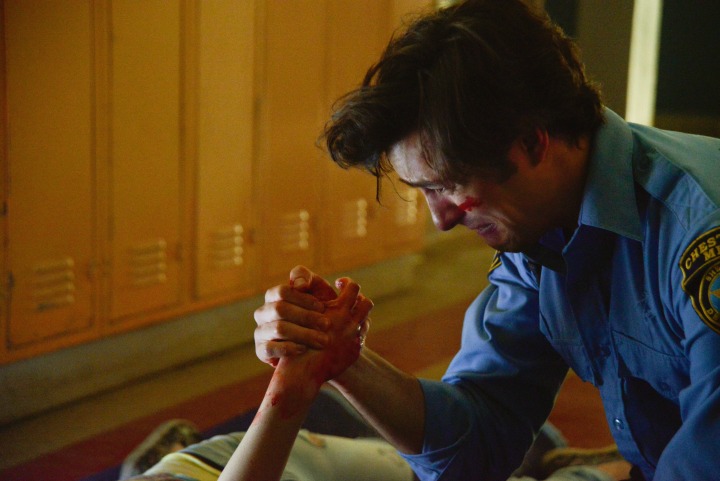 When Junior devoted himself to serving the town, even after Angie died.

Junior hasn’t been dealt an easy hand. His mother died when he was a child (or so he thought), his father proved to be an egomaniac, and then he lost the love of his life. While he was obviously broken up about Angie’s murder, he didn’t let his heartache keep him from protecting Chester’s Mill. Nothing could bring Angie back to him, but he could honor her life by selflessly serving others. 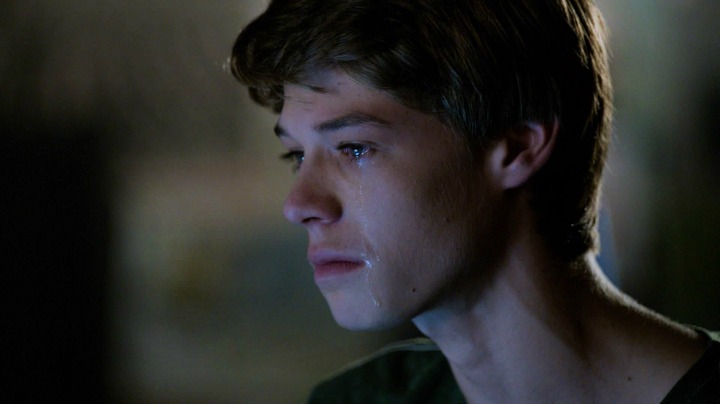 When Joe didn’t give up hope, even after losing his family.

Angie’s death didn’t just affect Junior. Joe was absolutely devastated by his sister’s death, and he used that pain as motivation to find who killed his sister and why.

Of course, Joe couldn’t have pushed forward without help. Throughout all of the heartache, Joe had an amazing support system in Norrie, Julia, Melanie, and Barbie. The Dome might be responsible for causing a lot of damage, but it sure did bring people closer together in times of need. 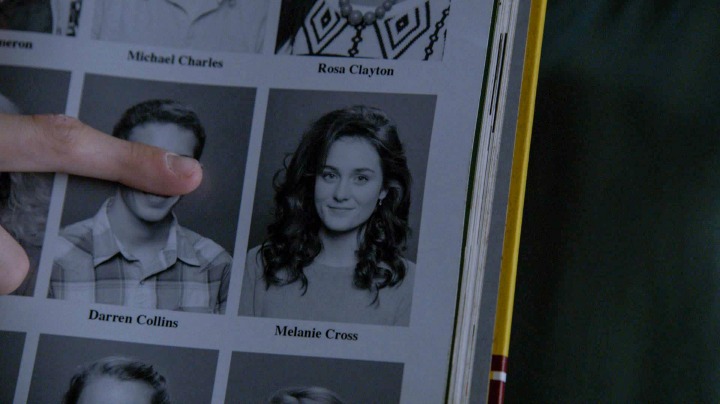 When people chose to trust Melanie, even though her life story was pretty unbelievable.

We’ll admit that we’d be pretty spooked if we met someone who claimed she had no idea who she was only to later find out she’d been dead for the past 25 years. But the people of Chester’s Mill are no strangers to the bizarre, and they eventually took Melanie under their wings. If that’s not taking a leap of faith, we don’t know what is. 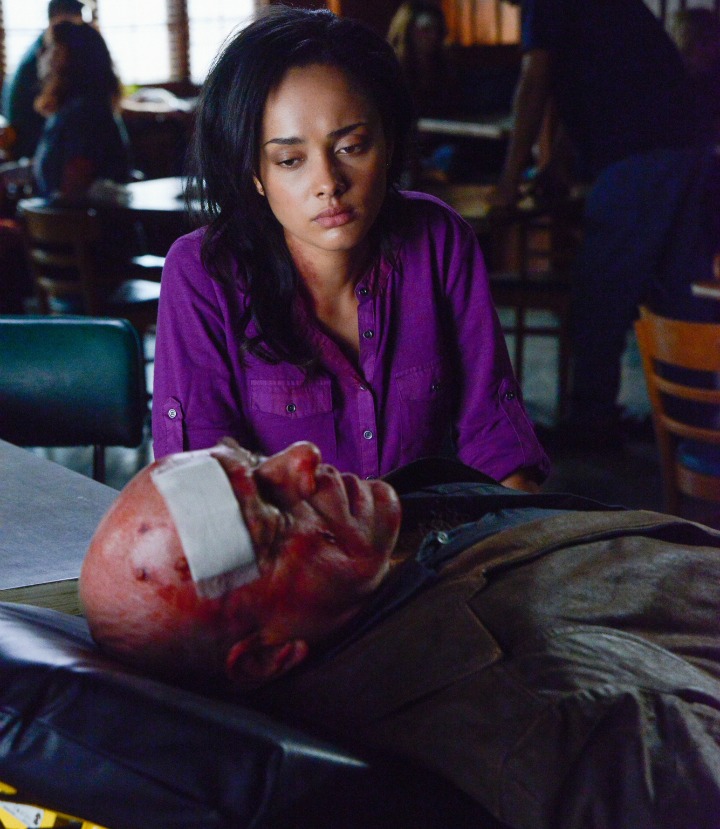 When they set up a triage center at the Sweet Briar after acid rain fell from the sky.

The Dome unleashed a lot of strange phenomena on Chester’s Mill, but none as quite so  horrifying as the time it poured bloody acid rain from the sky. However, even an acid attack couldn’t keep the town from helping each other out. With their limited resources, they set up a triage station in the diner, helping everyone who was scalded by the rainfall. 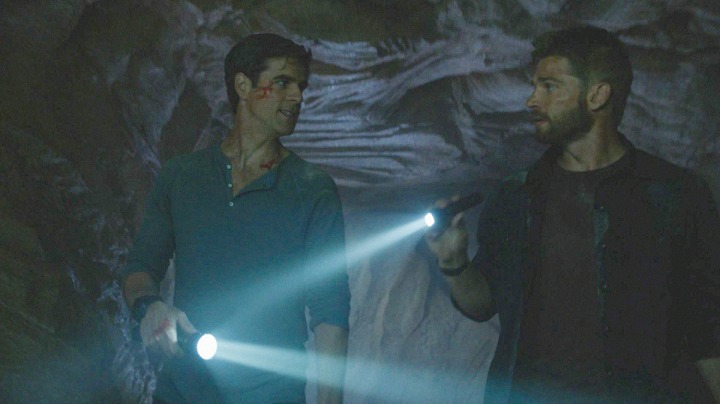 When Barbie chose to work with Sam, despite all the bad Sam has done.

After Sam admitted to killing Angie, we thought Barbie would for sure want him dead. But, in true Chester’s Mill fashion, Barbie worked to forgive and continue to work alongside Sam for the sake of the town. Without reestablishing the trust between them, the men would have set the town up for disaster by removing two of its most valuable leaders. 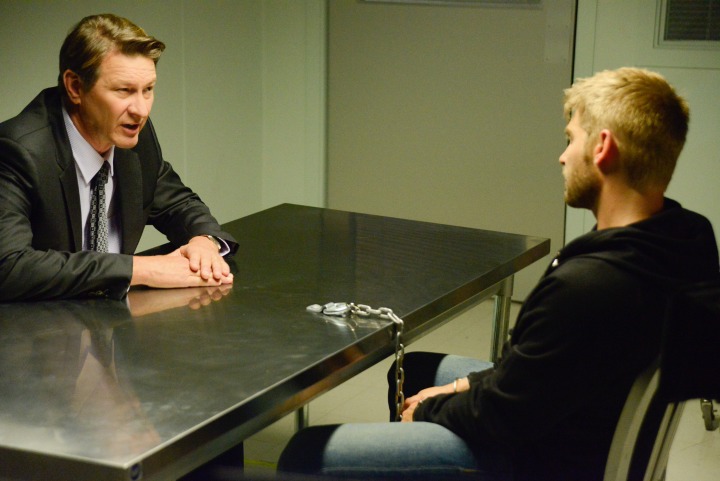 When Barbie persevered after learning his dad was using him for the egg.

Barbie has had one heck of a ride. After cutting his repelling rope loose and falling through the cave, he wound up in his hometown, Zenith. When he arrived, he was reunited with some of his old business partners, who immediately set him up on a heist. Instead of following through with their plan, Barbie set up the thieves by taking them to his father’s property and having them apprehended.

He was surprised to find his father was so caring and inquisitive after years of limited communication. Of course, we later learned he was putting on an act in order to use Barbie to get to the egg. Despite this deception, Barbie remained strong and didn’t let his father’s actions control him. 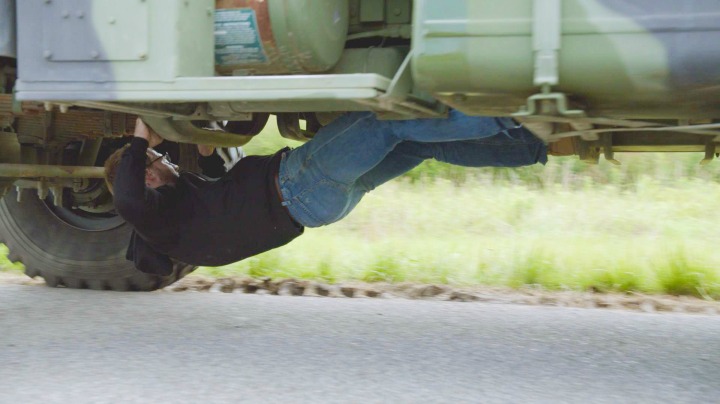 When Barbie and Julia had faith they would see each other again, even though everyone said he was dead).

Determined to see Julia and share information about the outside world, Barbie disguised himself as a government employee and made his way through security. From there, he clung to the bottom of a military vehicle and headed for the Dome.

He knew the mission would be risky and that he could even be killed for trying, but the prospect of helping Chester’s Mill was too much for Barbie to pass up. To be a true leader, you’ve got to take some risks, and Barbie does just that. 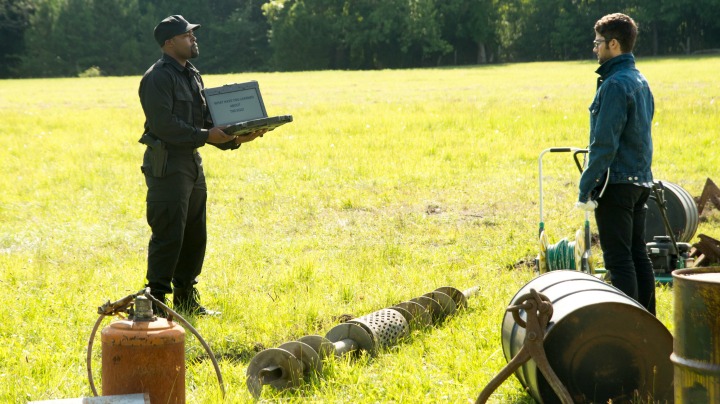 When they chose to trust Hunter, even after he lied to them.

Joe and Norrie followed Hunter to the edge of the Dome, only to learn he’d been working with the government to dig up information on the egg. They were rightfully angry, but instead of casting Hunter out, they listened to him and still treated him with respect. Perhaps it was their faith in him that drove him to call off the military, or perhaps he was just tired of living a lie, but Hunter transformed himself from a threat to a great ally.

Whoever said people can’t change has clearly never been to Chester’s Mill. 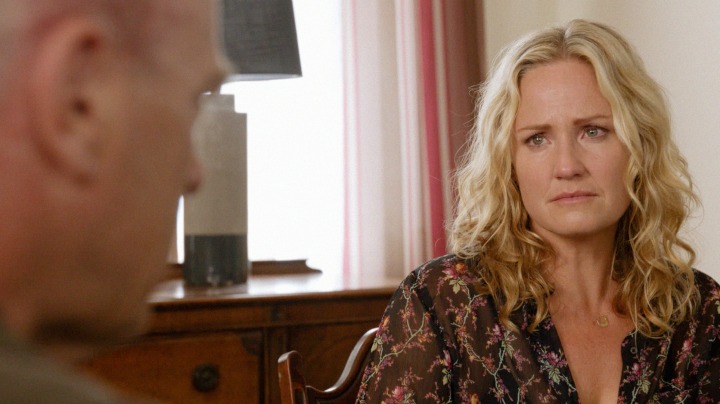 When Big Jim pushed his anger aside and embraced Pauline.

Big Jim Rennie may have a hot temper, but we can’t say he doesn’t love his family. After spending nine years believing his wife, Pauline, had committed suicide, Big Jim found himself face-to-face with her under the Dome. When he realized the Dome wasn’t just playing an evil trick on him, Big Jim grew angry. We can’t blame him, either. After all, he did have to bury the love of his life nearly a decade earlier.

Surprisingly, he didn’t let anger overcome him. He was given a chance to lead Chester’s Mill alongside his wife, and he took it. 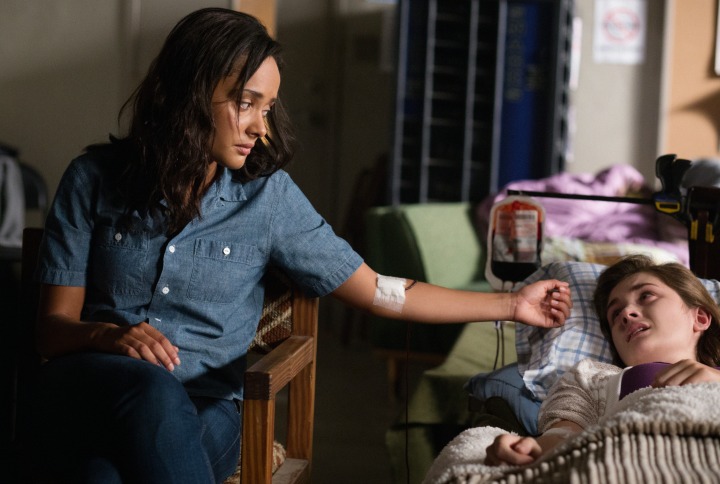 When Rebecca realized there are some things in life that don’t have an explanation.

Melanie’s health took a turn after Big Jim threw the egg over the cliff and into Zenith. In an effort to save her life, Rebecca set up a blood transfusion. During the process, Rebecca and Melanie had a conversation about faith and science that really challenged the way our favorite science teacher thought.

All of her life, Rebecca believed in the power of statistics and facts, trusting nothing that didn’t have a set explanation. Then she met Melanie, who had returned from the dead, and her perception started to shift. Maybe faith and science really could co-exist. 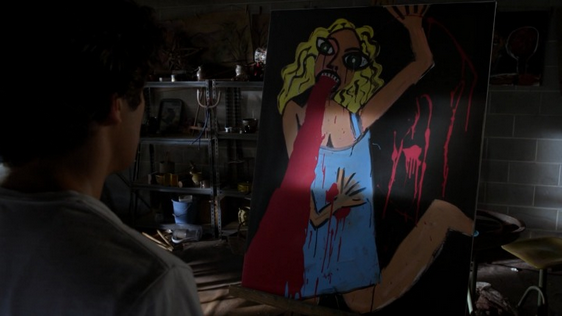 When Pauline tirelessly worked to protect Chester’s Mill, despite its impact on her sanity.

For years, Pauline suffered from excruciating headaches and gory visions. When it all became too much, she faked her own suicide in order to protect her family and friends in Chester’s Mill. But when the Dome came down, she didn’t leave them to suffer.

By embracing her visions and letting them guide her, Pauline was able to predict some of the greatest tragedies to take place under the Dome. In the end, she surrendered to her most personal vision yet, letting herself die in order to keep others safe. 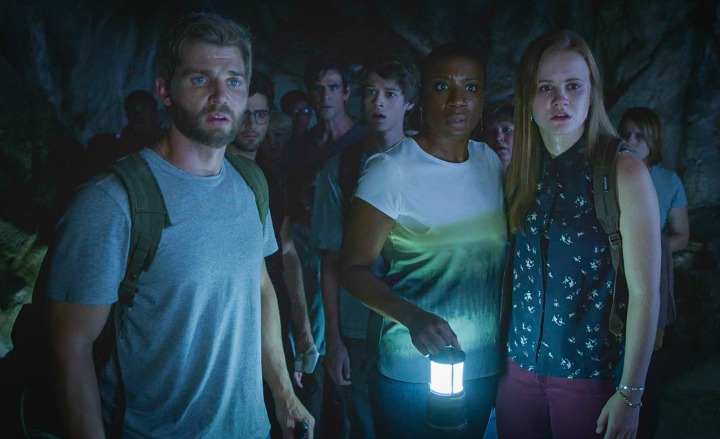 When they searched for the light at the end of the tunnel.

Determined to escape, the townspeople came up with a plan and elected Barbie as their leader. Unsure of what they would encounter, they embarked on a journey through the caves in search of a sign. The mission wasn’t easy, and they found themselves questioning the Dome and each other.

Then, a miracle happened. A single butterfly led them to a cave wall, which crumbled to the ground. On the other side, Melanie promised to take them all home. Finally, a light at the end of the tunnel.