Getting To Know Scorpion's Elyes Gabel

Elyes Gabel on CBS's high-octane drama, Katharine McPhee, and his second life as a musician.
Tough to say which is the most eclectic: Elyes Gabel’s acting resume (Game of Thrones, World War Z, Interstellar), his background (born in England, raised in Canada, and part Algerian/Indian/Dutch/Irish/Portuguese), or the herd of nerds he commands on Scorpion as computer genius Walter O'Brien. Whichever the case may be, Scorpion has become a hit thanks in large part to Gabel and his chemistry with on-screen love interest Katharine McPhee. So there was plenty to talk about when Watch! caught up with the 32 year old actor (who pronounces his name EL-ee-as Ga-BELL) for a conversation that was, you guessed it, eclectic.

So let’s start with the shoot. Had you ever been to Vietnam or Cambodia?
Yeah! I shot an episode of one of the first shows I did, an English show called Casualty, in Cambodia. So we were there for about three weeks. We shot in Phnom Penh and Angkor Wat. It's a beautiful place.

What’s been the most fun thing so far this season?
Rather than getting hung up on the details of whether formaldehyde can melt at a certain temperature and then it won’t be too loud so it won't disturb other people who are listening at a certain decibel rate and the hertz they hear isn't too low for a human to hear, we're navigating that line between having geniuses who seem like they know everything but also have some things to learn. So we don’t get hung up on the technical science as much as we do the characters.

That was still some pretty impressive technical jargon right there.
Yeah, I just made it up! [Laughs] You give me in an inch, mate, I'll take a yard. But look, the show's not written by people with 197 IQ; it’s written by incredibly intelligent, creative artists, so the writers put a lot of humor into it. And the heart and humor is the thing that keeps people coming back.

Scorpion deals with some serious real-life issues such as hackers, nuclear weapons, etc. How much do you and the show’s writers follow what’s going on in the news?
We don't all get together and discuss what’s happening in the news in relation to possible storylines, but it's important to be cognizant and educated regarding foreign affairs and cyber security issues, which have a huge impact on our lives and this internet era that we live in. Cyber threats play an important and prominent role in the world Scorpion inhabits. The perils of lost data and security are themes that affect every individual with a web footprint in the world.

Thanks to people like Bill Gates and Mark Zuckerberg, being a little on the geeky side is now actually cool. Were you ever called a nerd in school?
Absolutely, at different times! I enjoyed certain subjects like music, French, drama, and there are accolades in school that serve to categorize who you are in a social dynamic. Hello, geek head! 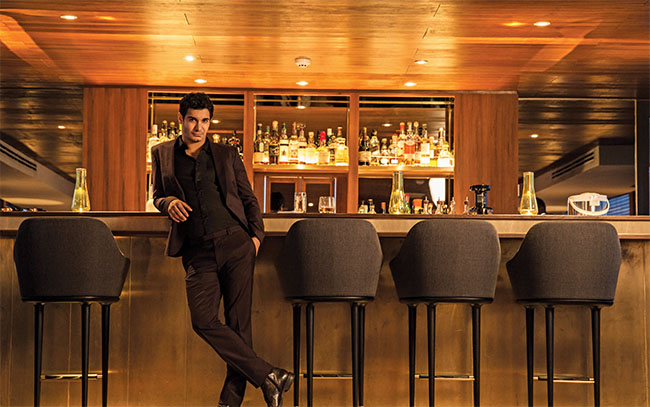 Who in the cast would be the best in an actual crisis?
Me, of course it would be me! I'm the person they chose to play a person with a 197 IQ! Who else would you pick? The guy who tells people what to do! Other people are better at certain things but I started the company, didn't I? [Laughs] No, it really depends on the scenario.

Zombie apocalypse.
Zombie apocalypse? Me! [Laughs] I am the most robotic character. So if you're looking for someone to interrogate or create some form of a mole to get deep into the cell of the zombies, then I’m the one who is the least human.

Let's just have every single answer be you.
Yeah, I know, it’' so egoistic.

Do you have a personal preference of whether the Walter-Paige thing speeds up or continues to take the scenic route?
Listen, who doesn’t want to take the scenic route if we’ve got time? We do 24 episodes this season, so we've got time—a lot of time. [Laughs] So put the radio on and enjoy the nuances of that relationship. Because everything's so quick and fast on this show, I like having something that's a slow burner.

What would you say you’ve learned from working with big directors like Chris Nolan and Marc Forster?
I think one of the things I found with Interstellar and more emphatically World War Z is that you try to search for authenticity. If it is a large-scale, large-scope thing, something that has these large themes, you let the idea bloom through grounding it with the people in that film. So it's your job as the actor to work out where you fit in.

Are Game of Thrones fans the craziest of all? Do they walk up to you in airports and speak Dothraki?
[Laughs] I was in the Isle of Man when I was doing another film with Kit Harington, who plays Jon Snow. I was in this shop, somebody said I was in Game of Thrones, and this guy shook my hand and then made the weirdest noise. [Gabel pauses to emit the high-pitched moan of a dying animal for a full 15 seconds.]

What is that?
I don’t know! Do you think I wanted to spend more time with a guy who did that?! I wanted to get the hell out of there! I don’t know if that was a Dothraki yell or what.

Having lived all over the world, is there any place you identify with the most?
Not really—I think that's the point of being a transient alien! I miss London sometimes, but it doesn't mean I don't feel at home over here in L.A. I've developed a certain life living here for four years now.

Yeah, what kind of stuff do you do when you’re not working?
I’m getting back into playing sports; I play with a soccer team out here. I play tennis. I play a lot of music as well. I play guitar and I’m trying to get back into recording and playing live. My interest is definitely trying to record and put out some music finally. It's been in the offing for a while.

How would you describe your music?
I like incredibly haunting melodies, live sounding arrangements. I have a range of influences like the Beatles, Sam Cooke, Fleet Foxes, Bon Iver, et cetera. I hope to be making some music very soon. Playing live music is a huge passion of mine.

Would you ever do a song with Kat?
She’s got an amazing voice; I’d be privileged to do a song with her! It has to be a marriage of styles though, you know? Rather than just doing something for the sake of doing something. She has an incredible voice but also a great musicality and knowledge about what she likes. And the more we get to know each other in a creative sense, I feel like she has a very similar taste in certain pieces of music and the creation of it.

Very well said. Okay, let's close on a laugh. What's the funniest on-set shenanigan?
We mess around on set quite a lot, and we do a lot of accents. It's important to keep it light when the world's gonna' fall apart. [Laughs] Kat and I have a nice little song... [Switches to a sing-song voice] "On Scorpion, you're always going to die. On Scorpion, in every episode, you're always going to die!"

Watch Scorpion on Mondays at 10/9c on CBS and CBS All Access.