Joey McIntyre On His New TV Show Return Of The Mac

New Kids on the Block’s Joey McIntyre is ready for his second act on Pop’s new comedy.
His name has been screamed by galaxies of girls since the age of 12, when he signed on as the youngest member of the 20 million-unit-selling boy band New Kids on the Block. As a solo artist, he’s unleashed six albums, including the Billboard top 10 hit “Stay the Same.”

But Joseph Mulrey McIntyre, aka Joey (or sometimes, the manlier “Joe”) McIntyre, has done anything but stay the same.

Although New Kids on the Block disbanded in 1994, the Boston-born singer has stayed omnipresent in music—a fact burnished by the still-roaring reunion of NKOTB, which will be making grown women weep this spring and summer. McIntyre has also racked up a slew of acting triumphs from off-Broadway (Tick, Tick... Boom!) to Broadway (playing Fiyero to Idina Menzel’s Elphaba in Wicked) to film (The Fantasticks) to television (Boston Public and heaps of guest spots). As they’d say in Beantown, this dude has wicked chops.

Now 44, McIntyre is psyched to unveil his new television creation, Return of the Mac, on the Pop network. Producing, co-writing and starring in this meta-as-it-gets, eight-episode comedy series, he plays “Joey McIntyre,” a scripted version of himself, as do his wife of 13 years, Barrett, and his three kids, Griffin, 9, Rhys, 7, and Kira, 5. Much of Return of the Mac was even shot at the multitasking star’s own L.A. home, where Watch! caught up with him for a fun photo shoot and chat.

So where does real life end and make-believe begin? From fatherhood to growing up gracefully to wearing, ahem, a leopard-print Speedo, Mr. McIntyre reveals (almost) all.

Hey, Joey! Or should I say Joe?

So, Joey, hit us with Return of the Mac’s premise.

The tone is Curb Your Enthusiasm meets Parenthood meets Episodes. It’s about me, in between jobs, doing school pickups for my kids, but really wanting out of the house. ’Cause when Daddy has a job, it’s good for everybody! [Laughs.] Because of that, I take jobs I probably shouldn’t. Because I really want to be a serious actor, which I tell [my real-life friend] Adam Ray, who plays my music manager and wannabe acting agent, and he says, “We’re gonna do it!”

But that’s not what happens, right?

Of course not. He sets up a meeting with what I think is, like, Showtime, where I’m going to pitch my crime novel series. But my manager says, “No. This is for The Comfy Channel.” I say, “WTF is The Comfy Channel?!” But the kids are screaming, so I’m, like, “Fine—let me out of the house!” We get there and they offer me a late-night talk show. I say no, but then I bump into January Jones, who’s a big New Kids fan, and she says, “OMG, you’d be amazing doing that!”

So, like any red-blooded heterosexual [man], I turn on a dime and say, “Right? I would be amazing!” The arc of the eight episodes is me taking the show, quitting it, playing tug-of-war with being a serious actor, and then coming back and dealing with a bunch of funny Comfy Channel characters, all mixed in with my family life.

Finish this sentence: Filming a TV show with my wife and kids has been...

… invigorating, fun and sometimes very stressful. I had cast a lot of friends for the pilot and when we got to the role of my wife, she stepped up and was great. With the kids, I didn’t know how disruptive it’d be, but it wasn’t a big deal. They had fun and only missed a couple of days of school. The cool thing with my wife—and a lot of couples will identify—is that when you have kids, their lives are so full, you barely have time to talk about your own lives. You’re talking the kids’ schedules or doing stuff around the house before bed and then you—maybe—have a few minutes in bed together. And, if you’re lucky, you’re doing really fun things. [Laughs.] But most of the time you’re ready to crash. With Return of the Mac, I didn’t have to explain to Barrett what happened at work—she was a part of it. We were sharing a journey together, and that was delightful. 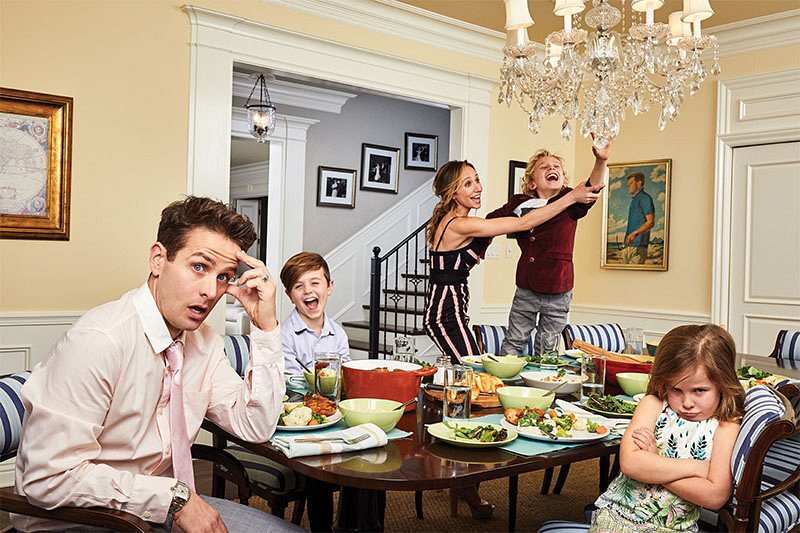 How impressed with Joey McIntyre, the star, are your kids?

Sometimes I wish it had more weight! [Laughs.] But sometimes it does. I was at the park the other day with my son, Griffin, and a friend and her daughter. We’re pushing the kids in swings and I’m telling my friend about the show and I say, “Yeah, I created it, I’m producing it and starring in it.” And Griffin goes, “He’s like Lin-Manuel [Miranda]!” My son loves Hamilton, and he recognizes that Lin-Manuel started it, worked hard, did the whole thing. So you couldn’t pay me a bigger compliment! If my son thinks I’m like Lin-Manuel, well, that’s a decent example to set for your kids about working hard and taking chances.

Word is that you “took a chance” in Return of the Mac, and there’s a scene with you in a leopard-print Speedo...

[Long pause, then big laugh.] Yeah, yeah, yeah! I make a deal with The Talk’s Aisha Tyler after [New Kids member and Return of the Mac co-executive producer] Donnie Wahlberg, who plays my consigliere, calls her after I make a couple of faux pas. He arranges for her to show me the talk-show-world ropes. But she’s sort of mafia-esque: “I’m gonna clean this up for you, but you might have to do something for me.” Cut to me at home with my wife. “Aisha’s gonna help, but I’ve gotta do one thing to close the deal.” Cut to me washing Aisha’s car in a leopard Speedo. With her looking at me like a piece a meat! [Laughs.]

Right. And the beautiful thing is—not to compare myself to the Rolling Stones or Paul McCartney—you can still be cool now no matter what age you are as long as it feels right. So I guess I’ve got another solid 30 years ahead of me.

Totally. OK, now that you’ve broached the subject of music legends, tell me: what do all former teen heartthrobs such as you and a few Return of the Mac guest stars like Joey Lawrence and NSYNC’s Joey Fatone have in common?

Love of the stage. There’s something about being in a place where you can touch people, and we all got that chance. But when you’re famous at 15 or 16, sure, it’s taken hard work, but you also have to have gotten a bunch of breaks. So it sort of seems like it’s meant to be. But when you have that opportunity, it’s all about what you do with it. I’m super grateful to be doin’ what I’m doin’ and still in the game.

The Pop network is about fans and fan culture. What are your thoughts on today’s fan culture, with its devotion to shameless lip-syncers?

It’s easy to get old fogeyish and say, “These kids don’t understand.” That being said, these kids don’t know what they’re missing. I’m old-fashioned, probably because I’m the youngest of nine kids and my parents weren’t baby boomers. So, for instance, take boy bands like One Direction. They’re talented, super sexy, and make great records. But they don’t dance. They don’t perform. The idea that people fill stadiums watching people just stand there is dumbfounding to me. It’s unheard of where I come from. If you’re a song-and-dance boy band like New Kids, that’s part of the equation. Until it isn’t. And right now, it isn’t. Very strange. OK, that’s my little soapbox thing. [Laughs.]

Bravo. As an ace actor, what’s your dream role?

Hmm. Well, even on Return of the Mac playing quote-unquote “myself,” once they say, “Action!” you’re advocating for a thought or a feeling, and in that moment, that’s a dream role. I don’t see my dream role as being on an hourlong drama. I’d rather work my ass off for eight episodes, go through the ups and downs of calling the shots—and of compromising—than have a steady gig for seven years. [Pauses.] Of course, in two years when you’re interviewing me because I’m on NCIS, then that’ll be a different story!

Other than being a decent husband and dad, I have to say Return of the Mac, because of the process. You can’t do it alone; you have to ask for help and be willing to compromise. And I haven’t always been able to do that. I think the fruits of that openness have led me to being able to create something, have a network and studio come together, and make it happen. I can pat myself on the back now and say, “Good for you. You did that. You showed up and were part of the team, and look what we have because of it.” Why not let that be a legacy I can build on? That I show up—I show up and I give my all. Ya know?! There’s nothin’ better!