In Praise Of Homeland's Carrie Mathison

Claire Danes has created a woman of substance with her Homeland heroine.
As we move through the seventh season of Homeland (a show that sometimes gets uncomfortably close to what we think is going on in the world), let's take a moment to sing the praises of Carrie Mathison, played by award-winning actress Claire Danes, the most unlikely—and perhaps the most necessary—heroine on TV.

Yes, Carrie can act a little alarming. She has a gift for creating drama that, let's just say, might be avoidable. Remember when she and Saul cleverly contrive to have her institutionalized so that she can get the goods on the Iranian bank that financed the Langley bombing? Surely there had to be an easier way to get that financial information than three months of torture in a mental hospital. Where's Bob Mueller when you need him? 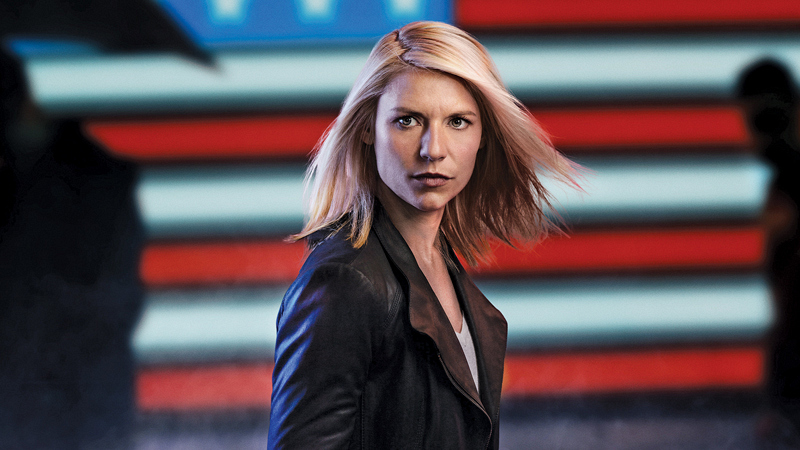 Danes' portrayal of the complex Mathison has earned her two Golden Globe wins.

Let's start with the fact that she's fearless. And relentless. There are moments in the show where I'm saying, "Oh, for God's sakes, give up, go home, put on your fake wedding ring, and find yourself a handsome stranger to schtup." She never does. Instead, she plows on, and in the process makes terrible decisions and puts people in danger. But when she screws up, it's usually out of some twisted sense of loyalty.

For example, when Peter Quinn (played by Rupert Friend) was so horribly damaged by sarin gas, Carrie took him in to live in the basement of her townhouse—thus endangering her own child and losing custody. It's heartbreaking because we know how much she adores her daughter and how much she struggles to balance her maternal instincts with her devotion to Quinn, her patriotism, and her need to excel in her work. 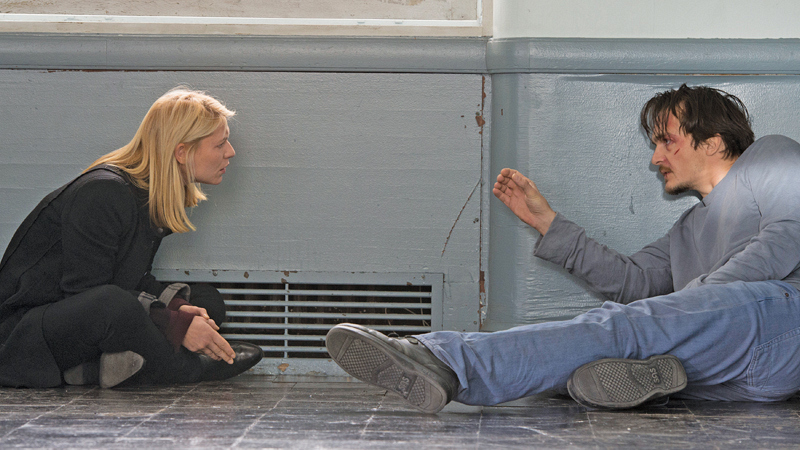 Carrie Mathison (Claire Danes) does whatever it takes to help her friend and colleague Peter Quinn (Rupert Friend).

And then there's the little matter of her mental condition: bipolar disorder, which is so central to who she is. She has a love/hate relationship with many entities in the show, but perhaps most of all with her own mental instability. When she is on her medication she can function, more or less. But when she is off her medication she believes herself to be more insightful; she develops a sixth sense about who is a bad guy. As soon as she goes off her meds, you're just waiting for that next manic scene with the connect-the-dots diagram and the arrows all over the walls. And the strings—always with the strings. People think she's crazy, and she is. But she's also right.

Recently a friend with bipolar disorder told me, "Homeland has the best depiction of this illness that I've ever seen. Medication makes you flat and not able to feel. Mania is fun and a rush, but ends in destruction. Carrie knows she is great at her job because she is bipolar—the grandiosity makes her think she can do anything, and that, combined with poor impulse control, is very helpful in her line of work." 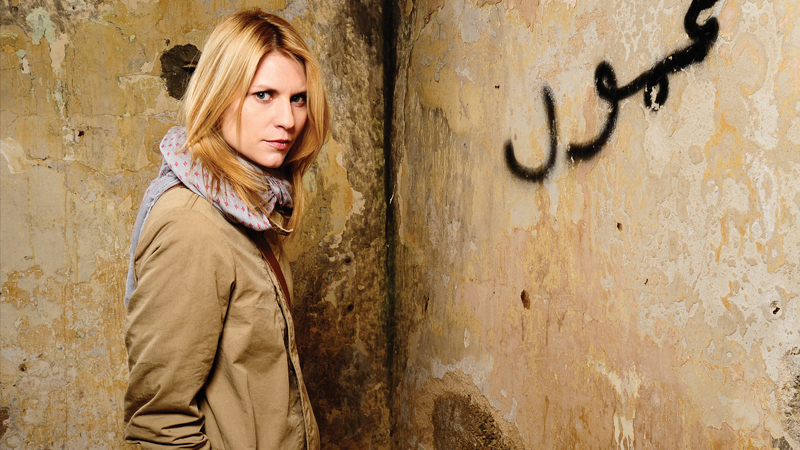 "Carrie Mathison is the most unlikely—and perhaps most necessary—heroine on television."

But then there will be one train wreck or another, she will have to go back on her meds, she'll feel flat and empty and not as competent, and she'll go off them again. It's an endless cycle that's true for so many, even those of us who are not battling ISIS.

Indeed it is Carrie's imbalance, not her heroism, that makes us root for her. We love her most when she's doing something stupid—and she does something stupid a lot. But she always has a moral compass, even if the morality is lost on most people around her. Take, for instance, the scene after Nicholas Brody (played by Damian Lewis) becomes a double agent, then is betrayed and hanged in Iran. Carrie surreptitiously draws a star for him on the memorial wall. Did he betray the country and act on our behalf only under duress? Yes. But did he deserve that star? Yes, that too. 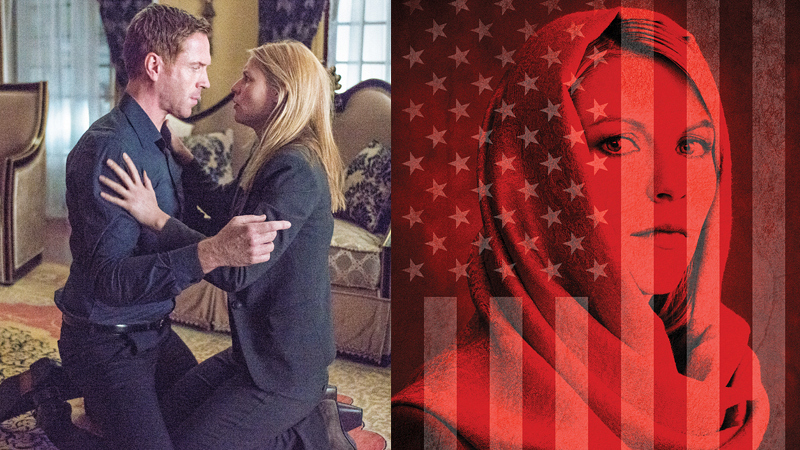 "We love her most when she's doing something stupid. But she always has a moral compass."

We love her, too, for her rapacity and often poor judgment in relationships. (Having two mentally ill parents and a mother who bailed when you were a teenager doesn't generally set you up for a lifetime of sound sexual decisions.) Carrie's taste in men could kill her, and almost has. She lives outside the bounds of sexual norms, just as she is outside, well, any other kind of norm.

But there is a side to our love that may be even darker, summed up perfectly by Amy Hargreaves. She plays Carrie's sister, Maggie, the calming and stabilizing center of the Mathison family, if not of the whole show. It is Maggie whom Carrie both loves and resents—knowing that ultimately all of her spycraft and world-saving wouldn't be possible without her sister.

"I think that as women we have a secret—or maybe not-so-secret—thrill in watching Carrie put herself first no matter what," Hargreaves says. "We, as women, sacrifice and often put ourselves behind our kids and our partners. But not Carrie. Her occasional indifference to her child and her subpar mothering might speak to a secret part of us ladies... the part that sometimes wants to just say screw it, and go out for milk... and never come back." 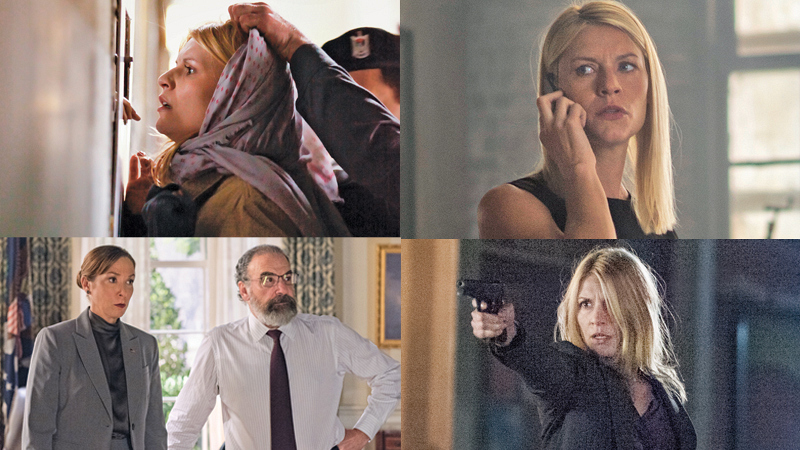 Like everyone else on the planet, I'm trying to figure out where this season will land us. The show has occasionally been frighteningly prescient, with plot lines predicting, for example, the Alex Jones phenomenon and the Russian bot infiltration. (Though in Season 6, the fake news turns out to be created by us.) But more centrally: Where does Carrie go, what does she do, where is her daughter, and will there be a soul mate who isn't even more unbalanced than she is?

Only one thing is certain: The show will continue to play to our most enduring fantasies. It's not just the fascinating moral ambiguity of the government and military—particularly close to the bone right now—that keeps us watching. It's the idea, embodied by Carrie Mathison, that as individuals, what's wrong with us is actually what's right with us. That our flaws can make us, if not better, then Byronically thrilling: mad, bad, and dangerous to know.

Homeland airs on Sundays at 9 p.m. ET/PT on Showtime, and streams on Showtime Anytime.