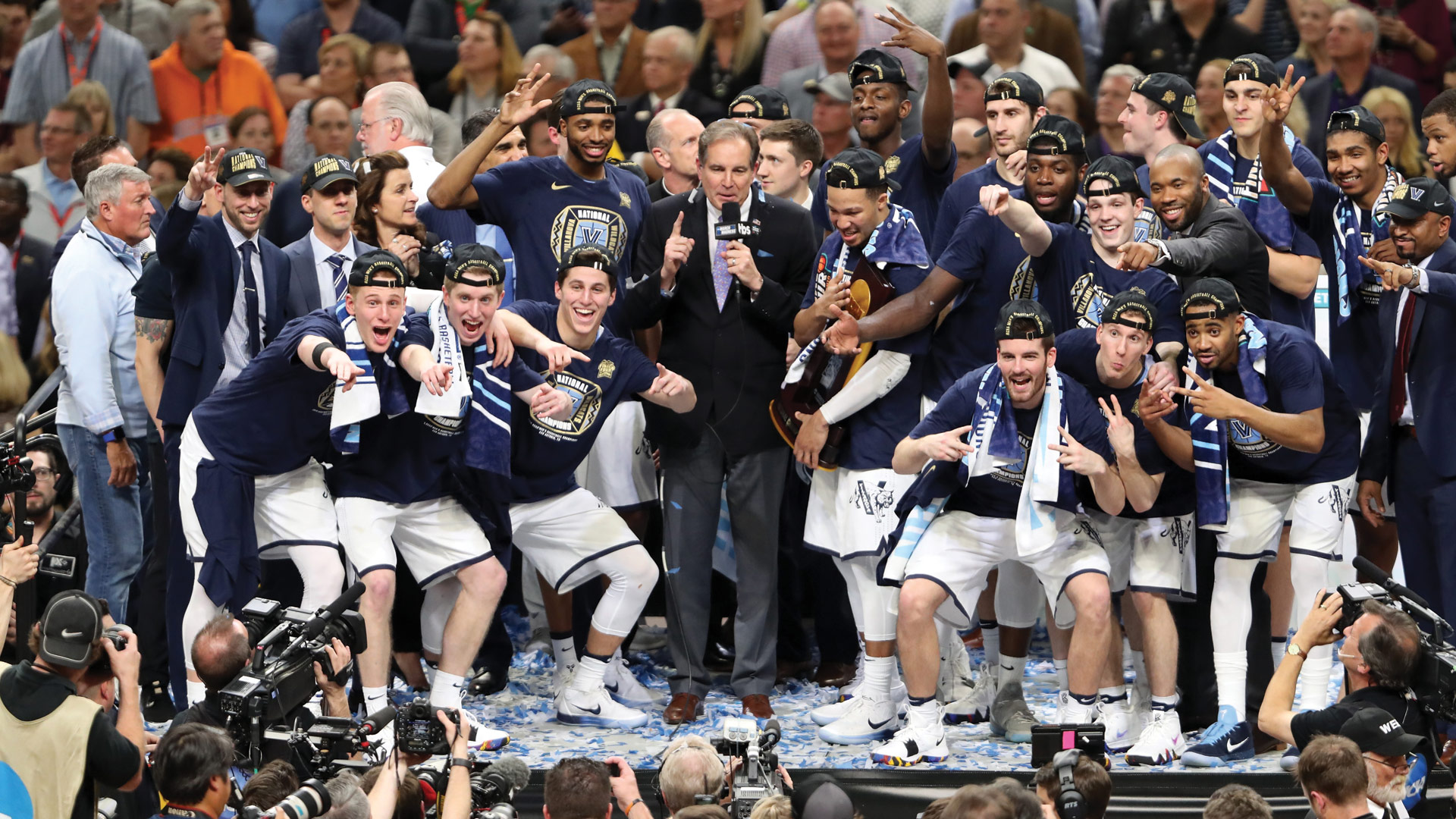 The most heart-pounding, buzzer-beating highlights from NCAA March Madness

As college basketball enthusiasts across the country begin their annual descent into March Madness we're reminded of what we love about the NCAA Division I Men's Basketball Tournament: the predictable chaos of one month, 68 teams, and a single shared goal to survive and advance.

From top-seeded showdowns to bracket-busting Cinderella stories, there's always a new step to learn at the Big Dance. To mark the occasion, we break down 10 of the most memorable moments in tournament history.

Pictured above: The Villanova Wildcats celebrate their April 2, 2018, Final Four victory against the Michigan Wolverines with CBS sportscaster Jim Nantz. 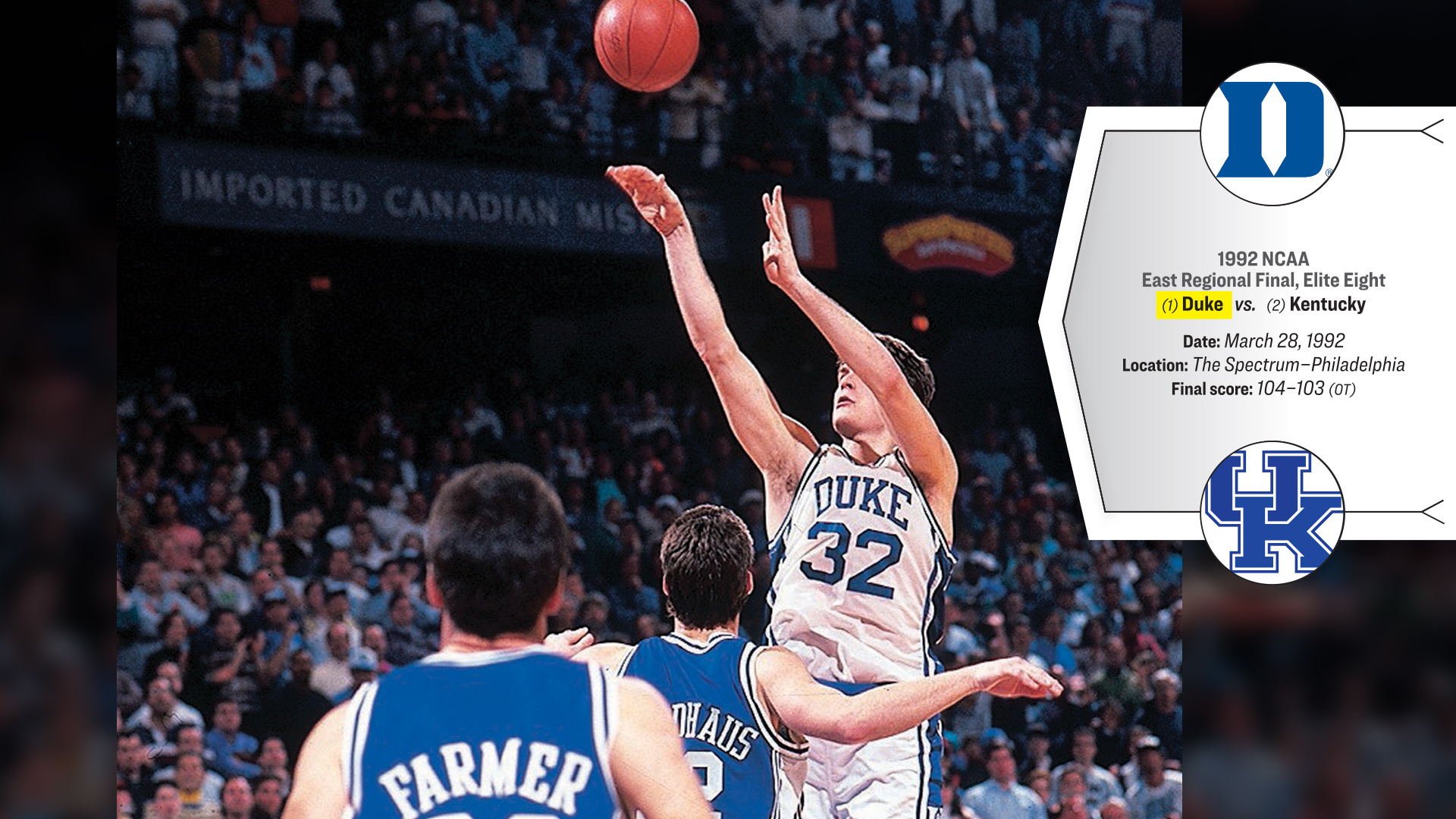 Was the 1992 East Regional Final the greatest basketball game of all time? It depends on whom you ask. (Maybe don't ask anyone in Lexington—still raw.) Less debatable: Nearly three decades later, no play remains more permanently burned into our collective memory.

The rest is iconic pandemonium: announcer Verne Lundquist's bellowed "Yesss," Laettner's jubilant scramble, shooting guard Thomas Hill's shocked head clutch, and a moment in which the Duke Blue Devils became one of the most beloved—and reviled—teams in the history of sports. 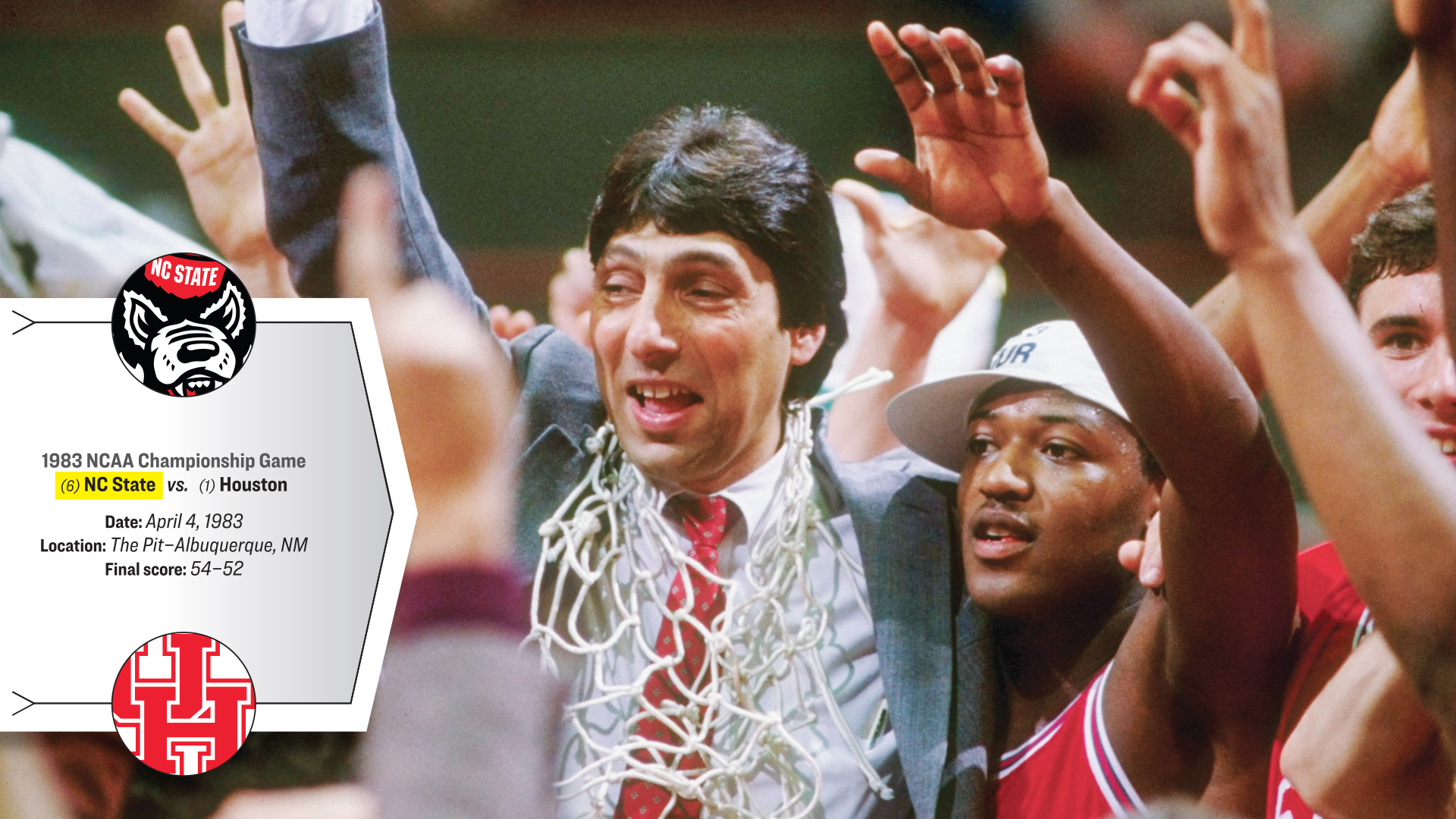 Jimmy Valvano wants somebody to hug

The celebration can't always be as smooth as the winning shot, but the late NC State coach Jim Valvano turned an impromptu display of raw emotion into one of the most endearing moments in tournament history.

Up against future NBA stars Hakeem Olajuwon and Clyde Drexler, the heart and soul of Houston’s "Phi Slama Jama" squad, NC State shouldn't have had much of a prayer. But foul trouble (Drexler's) and altitude sickness (Olajuwon's) helped keep things knotted late into the second half. With 4 seconds on the clock, State guard Dereck Whittenburg launched a Hail Mary from near half-court—he'd later call it a pass—that missed everything but his teammate Lorenzo Charles' hands.

A putback dunk at the buzzer snapped Houston’s 26-game winning streak, cemented an all-time upset, and sent a visibly shocked Valvano sprinting up and down the court in search of someone—anyone—to embrace. Euphoric and spontaneous, Jimmy V's victory lap of temporarily unrequited love remains the NCAA gold standard. 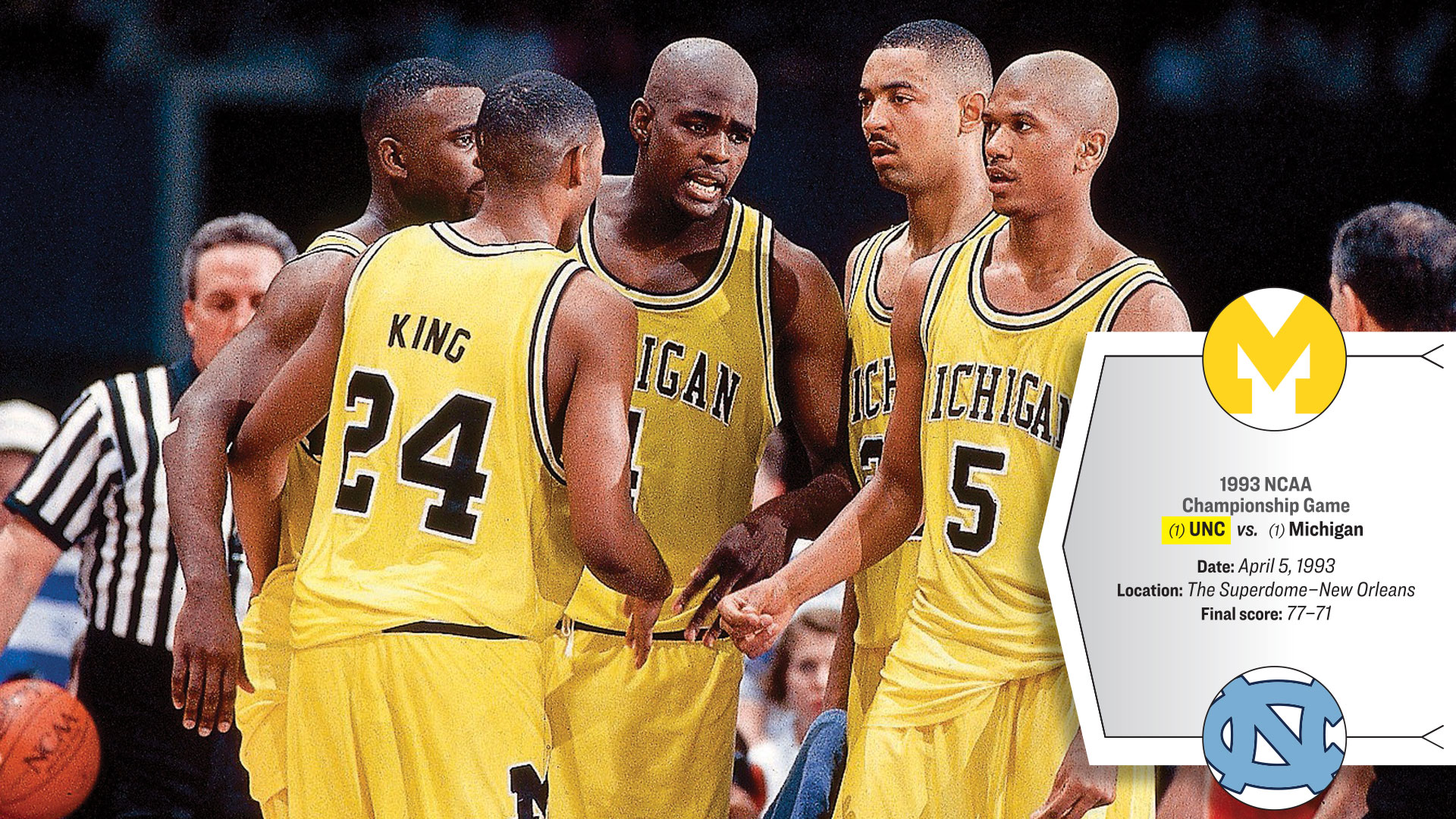 Webber calls for the T.O., gets a T

Michigan's Fab Five—the university's storied, once-in-a-lifetime recruiting class—had reached the finals a season prior as freshmen, so for Chris Webber, Jalen Rose, Juwan Howard, Jimmy King, and Ray Jackson, the 1993 tournament was about unfinished business, this time against the University of North Carolina.

Down 2 points with 19 seconds left in regulation, Webber rebounded a missed UNC free throw and promptly committed an egregious yet uncalled travel. It was a glimmer of false hope for Michigan fans, who had to think luck was on their side. Perhaps thrown by his misstep, Webber dribbled into the frontcourt and drove to the corner, directly into a smothering UNC double-team. Then he pivoted away from the pressure, trained his eyes on an official, and instinctively extended his fingertips to his palm—timeout. The only problem?

Michigan had no timeouts remaining and was subsequently called for a technical foul. UNC sank two free throws, then two more on a desperation foul, and that was that.

For fans, the play lives on as one of the most costly mental errors ever committed, and an enduring potential nightmare for any coach facing a final possession. In the tournament, time waits for no man. 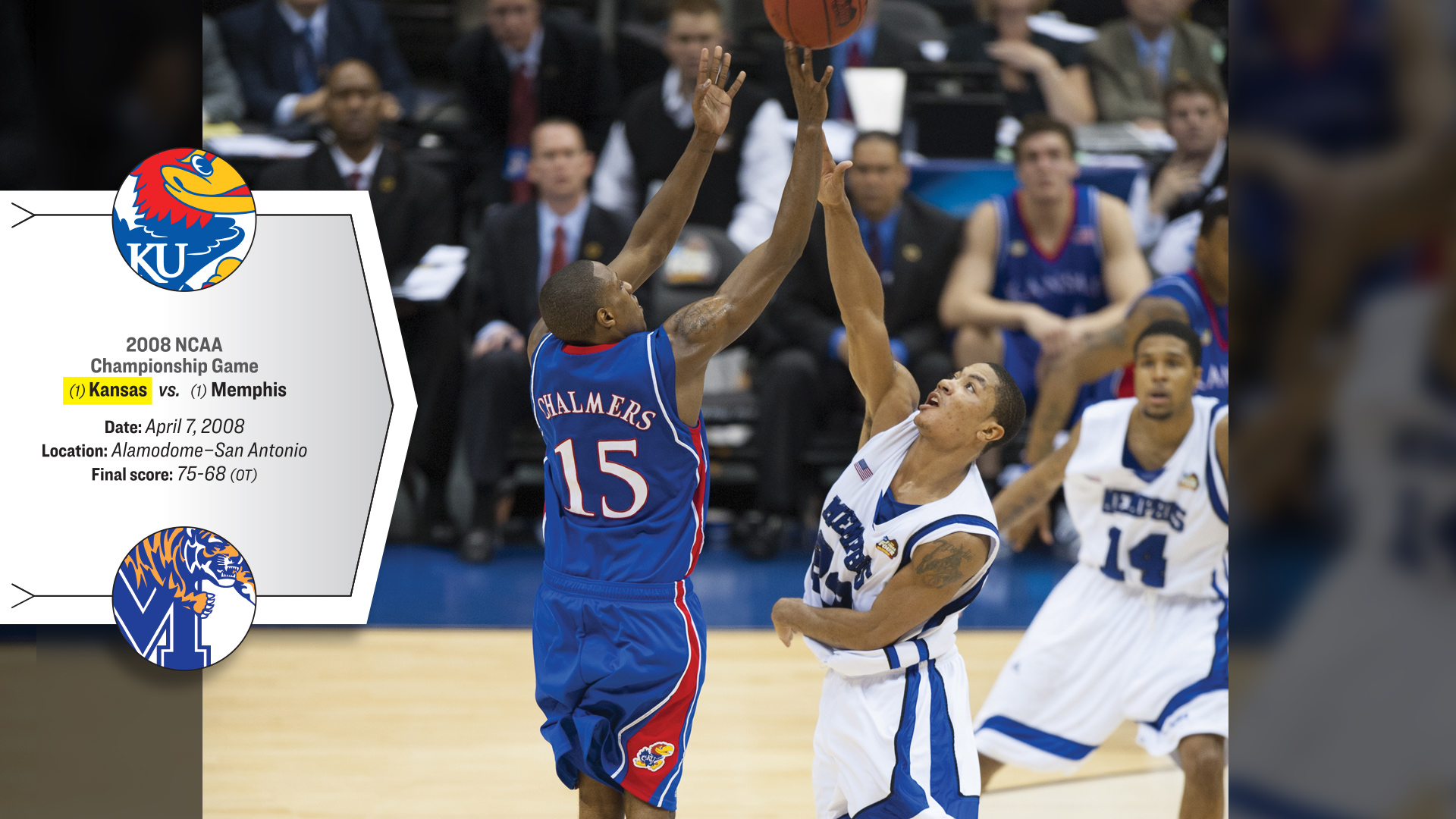 The 2008 tournament was a good year to go chalk in your brackets: For the first time in history, all No. 1 seeds made the Final Four. If you think that sounds boring, well, you’d be wrong.

Kansas, led by guard Mario Chalmers, and Memphis, led by guard Derrick Rose, traded buckets all night before the Jayhawks countered a late Tigers run to erase a 9-point deficit at the end of regulation. The play of the game—called "Chop" by Kansas coach Bill Self—came when Chalmers darted off a screen on the right wing to the top of the arc, took a handoff pass from Sherron Collins, and nailed a fadeaway 3 with 2.1 left on the clock. (Kansas had made only two 3-pointers in the game previously, proving that, when you’re finding your stroke, it's better late than never.)

Kansas took the lead in overtime and never looked back on its way to the school’s first national championship in 20 years. For a game that could have gone many different ways, Chalmers saw only one outcome. "I knew it was good the moment it left my hand," he later told reporters. "I knew we had them, too. You could tell on their face they were defeated." 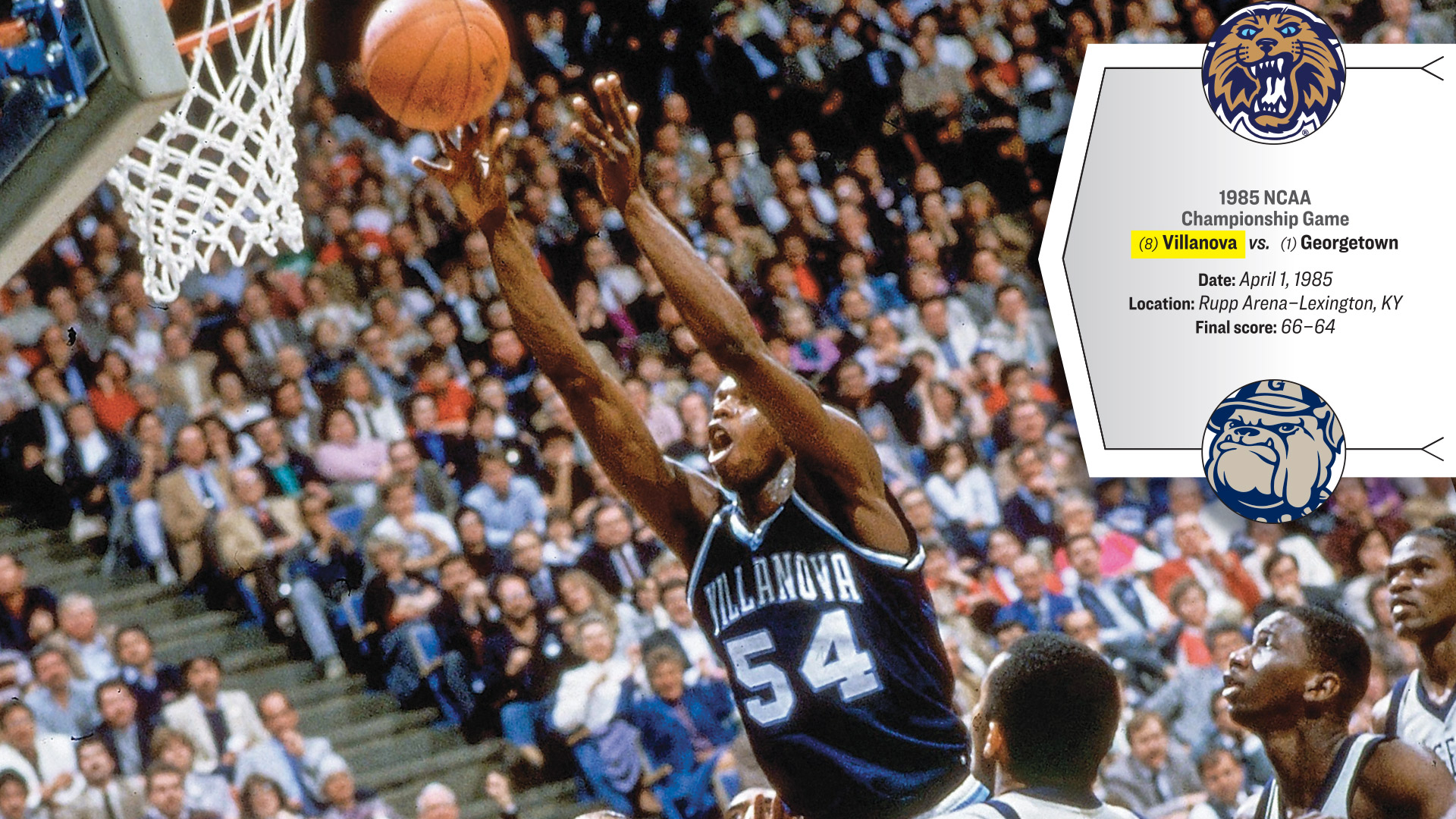 Something that college basketball analysts have long repeated but possibly never believed: It’s only a matter of time before a 16 seed takes down a 1. Say what you would about dangerous and motivated mid-majors and the growing overall parity in college athletics—when you looked at the running tally (a definitive 0–135), it didn’t quite seem like an in-this-lifetime scenario. Then it happened.

Virginia, coming off a 31–2 season and an ACC championship, was heavily favored against the UMBC Retrievers of the America East Conference. The squads battled to a 21–21 halftime tie, but in the second half—led by senior guard Jairus Lyles—the underdog started scoring at a breakneck pace, exposing the Cavaliers' usually stingy defense.

If the seemingly impossible felt somewhat anticlimactic by the final buzzer, it was only because the game ended not with a prayer, but with a slow and systematic dismantling. Putting a finer point on things after the game, Virginia coach Tony Bennett said, "That was a thorough butt whipping." The Retrievers' Cinderella run would be short-lived—they lost to Kansas State in the next round—but by busting brackets and capturing hearts, they earned a piece of tournament immortality. 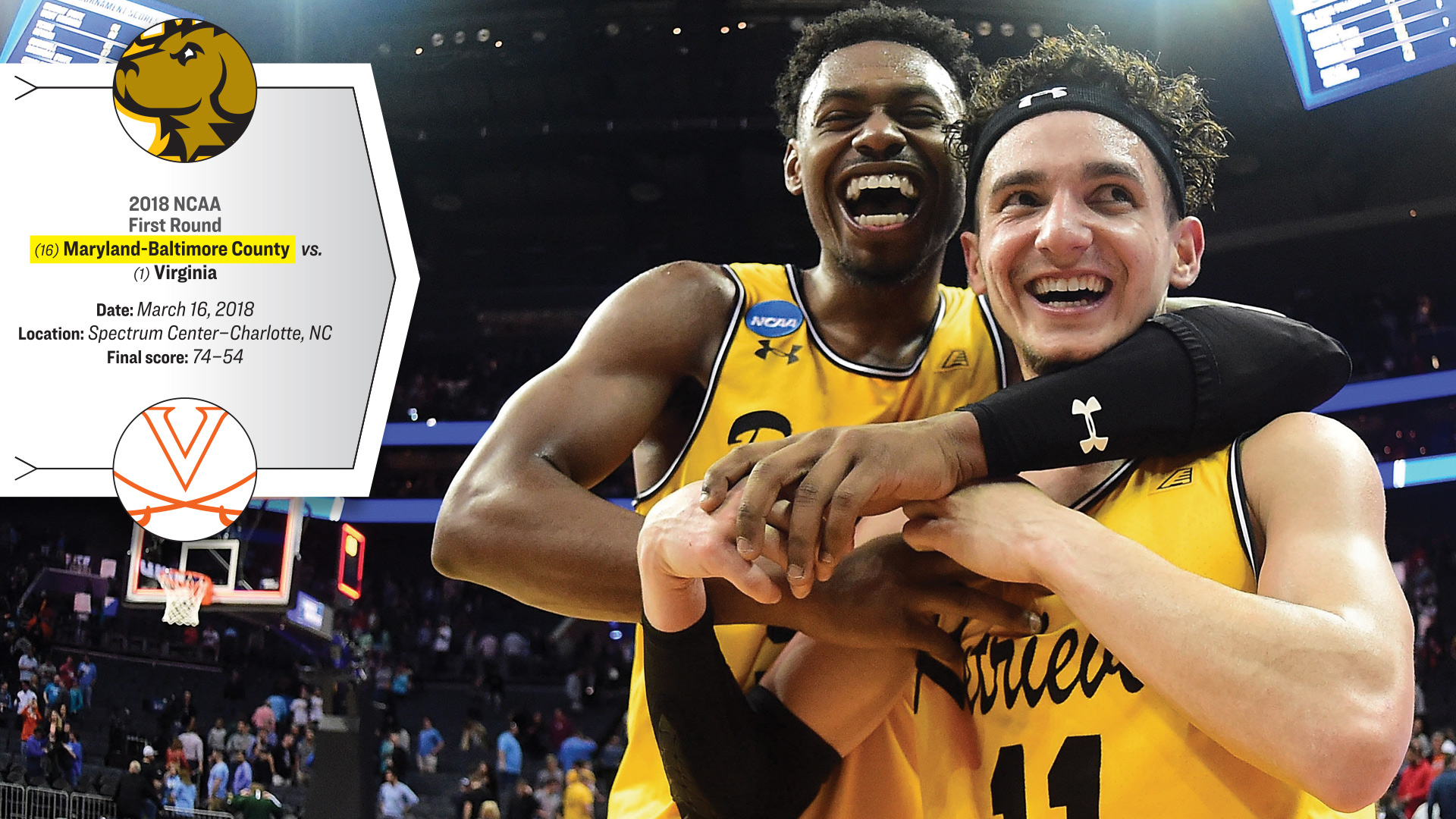 March Madness is famous for its David-and Goliath moments, but by the time the finals roll around there are usually more giants than giant-killers left standing. The 1985 Villanova Wildcats are a notable exception; they still hold the distinction of being the lowest seed—an 8—to win it all, knocking off top-seeded Michigan and 2-seed UNC on the way to a showdown with Big East foe Georgetown.

So how do you take down a team that’s already beaten you twice in the regular season, one led by All-American center Patrick Ewing? It helps to play a flawless game, and 'Nova nearly did just that. Sparked by 16 points from forward Ed Pinckney, the Wildcats shot an astounding 78.6 percent from the floor on 22-of-28 shooting. The team missed only one field goal in the second half.

Of course, by today's high-octane offensive standards, 28 attempts is probably the more puzzling stat and, yes, this game featured a healthy dose of the "four corners" offense. (It was also the last tournament game of the pre-shot-clock era.) But Villanova's first of three national championships proves that it’s less about how many shots you take and more about how many you make. 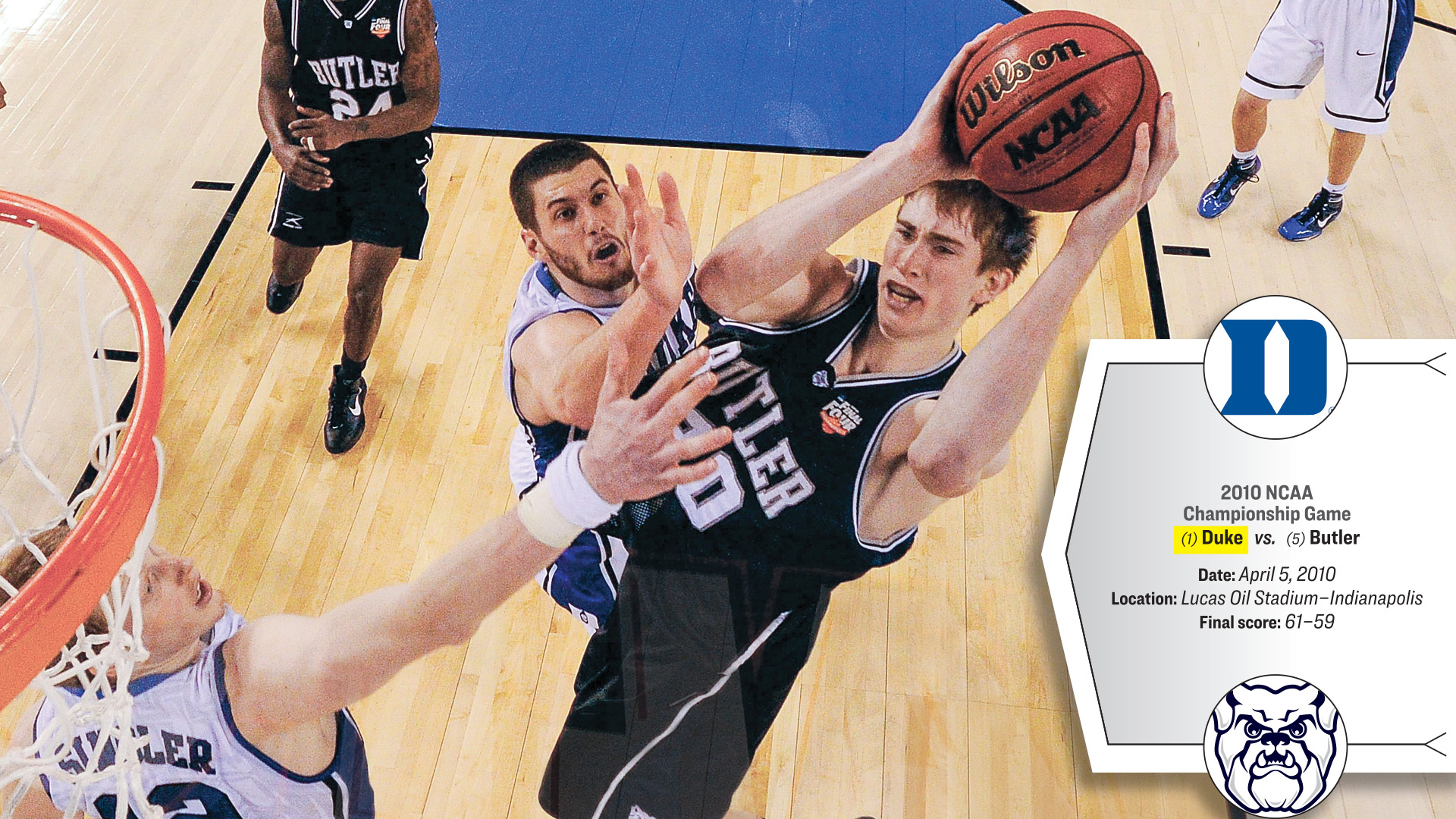 March Madness is all about speed, from the breakneck pace of play to the fractions of seconds that separate improbable wins and crushing defeats. But occasionally, the rules of time and space cease to apply.

In 2010, the Butler Bulldogs were down 1 with 3.6 seconds to play. A foul put Duke big man Brian Zoubek on the line, where he would make the first and intentionally brick the second—a bit of Krzyzewski-ian strategy to force Butler to secure the rebound, drive the court, and attempt a final shot without the benefit of a timeout to set up a play. As the ball caromed off the rim, Butler sophomore Gordon Hayward grabbed it, rolled to his right, and pushed upcourt, launching a high-arcing runner at half-court. Twenty minutes later—or was it two-tenths of a second?—the basketball hit backboard, then the front of the cylinder, and ultimately rimmed out.

The Indy Star called the shot "3 inches from the greatest basketball story ever told," and Duke and Butler fans alike had an excruciating amount of time to see that story being written between the ball leaving Hayward's fingertips and ricocheting off the iron. For Duke, it was the first championship since 2001. For Butler, it would have been the first ever (they’d return a year later but fall to UConn). For both squads, it was a moment of truth that seemed to extend into eternity. 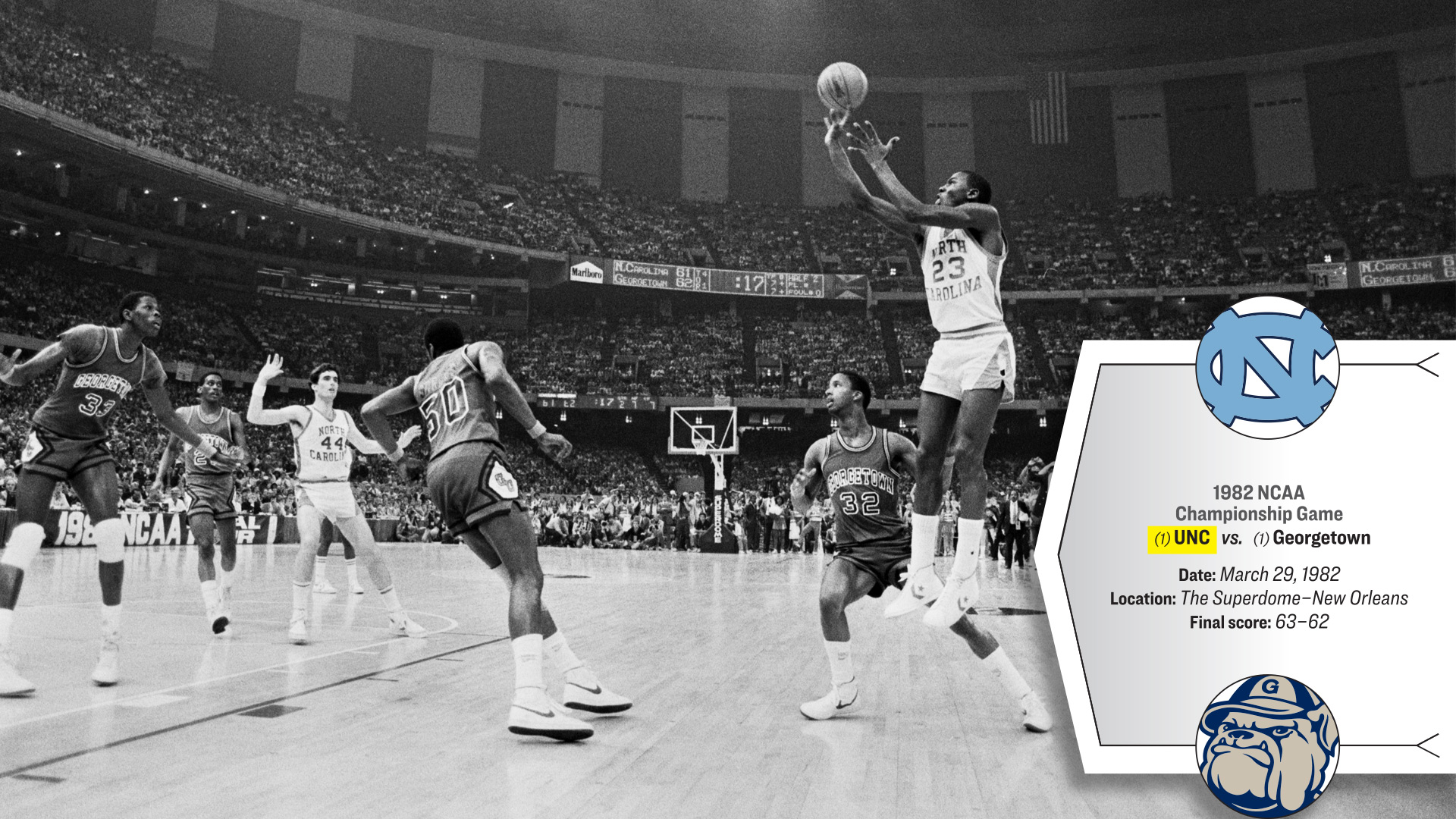 James is Worthy, but Michael is Jordan

Legendary North Carolina coach Dean Smith won his first NCAA championship in grand fashion, in a game that featured 15 lead changes and a court full of future NBA AllStars, from Patrick Ewing to James Worthy to a plucky freshman named Michael Jordan. The game’s final seconds, however, really separated the goats from the G.O.A.T.

Down a point with less than a minute to play, UNC needed a basket and turned to Jordan—rather than Worthy or Sam Perkins, as most were suspecting—to deliver it. MJ took a cross-court pass, elevated from the left wing, and drained it.

If it was brilliant strategy to keep the ball out of Worthy’s hands, Georgetown took a decidedly different approach on its final possession. Hoya guard Fred Brown, mistaking Worthy for a teammate, passed it right to him, icing a now-legendary game that featured a little bit of everything, including one of the earliest clutch performances from the man who would become His Airness. 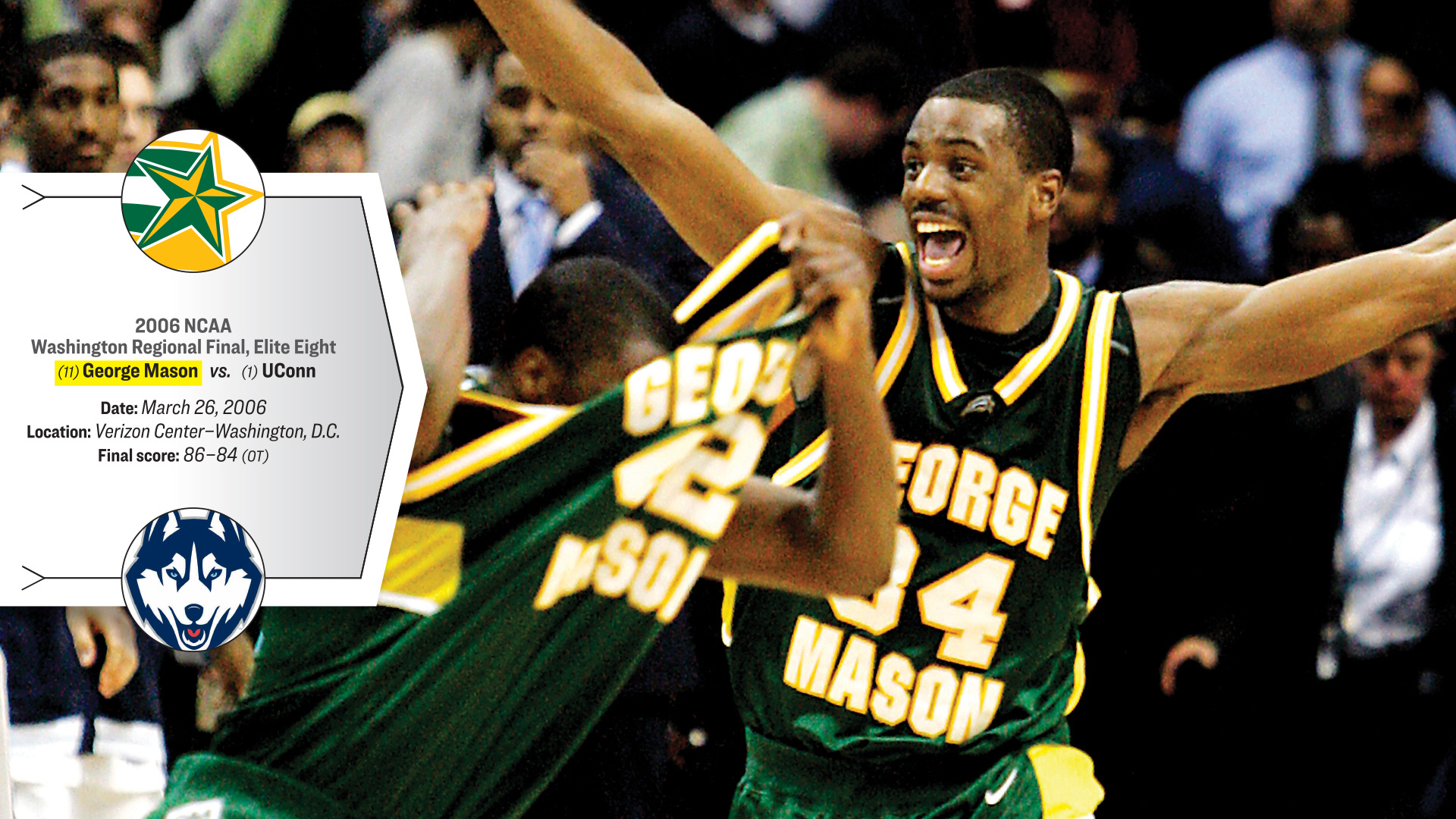 March Madness wouldn't be March Madness without a yearly Cinderella or two, but the glass slipper doesn't fit every team the same. In 2006, when George Mason sneaked in with a controversial at-large bid—they didn’t even win the Colonial Athletic Association championship that year—coach Jim Larranaga's squad wasn’t thinking one-and-done. The Patriots knocked off sixth-seeded Michigan State (their first tournament victory ever) and then embarked on an underdog run for the ages.

After beating defending champion UNC and fellow mid-major Wichita State in the Sweet Sixteen, George Mason drew the matchup of a lifetime, top-seeded UConn, a game that many thought would allow them to head back to Virginia with their heads held high. Again, George Mason had other plans. Facing a Huskies squad that would soon have five players taken in the NBA draft, George Mason relied on tenacity to make up for lack of size, pushing a wild game to overtime, and then to a 2-point victory. At the buzzer, as UConn's desperation 3 missed the mark, announcer Verne Lundquist exclaimed, "By George! The dream is still alive!"

George Mason is among three other 11s (LSU in 1986, VCU in 2011, and Loyola-Chicago in 2018) as the lowest seeds to make the Final Four. The Patriots finally lost to the Florida Gators, the eventual champions. As far as fairy tales go, however, none have quite equaled their magic. 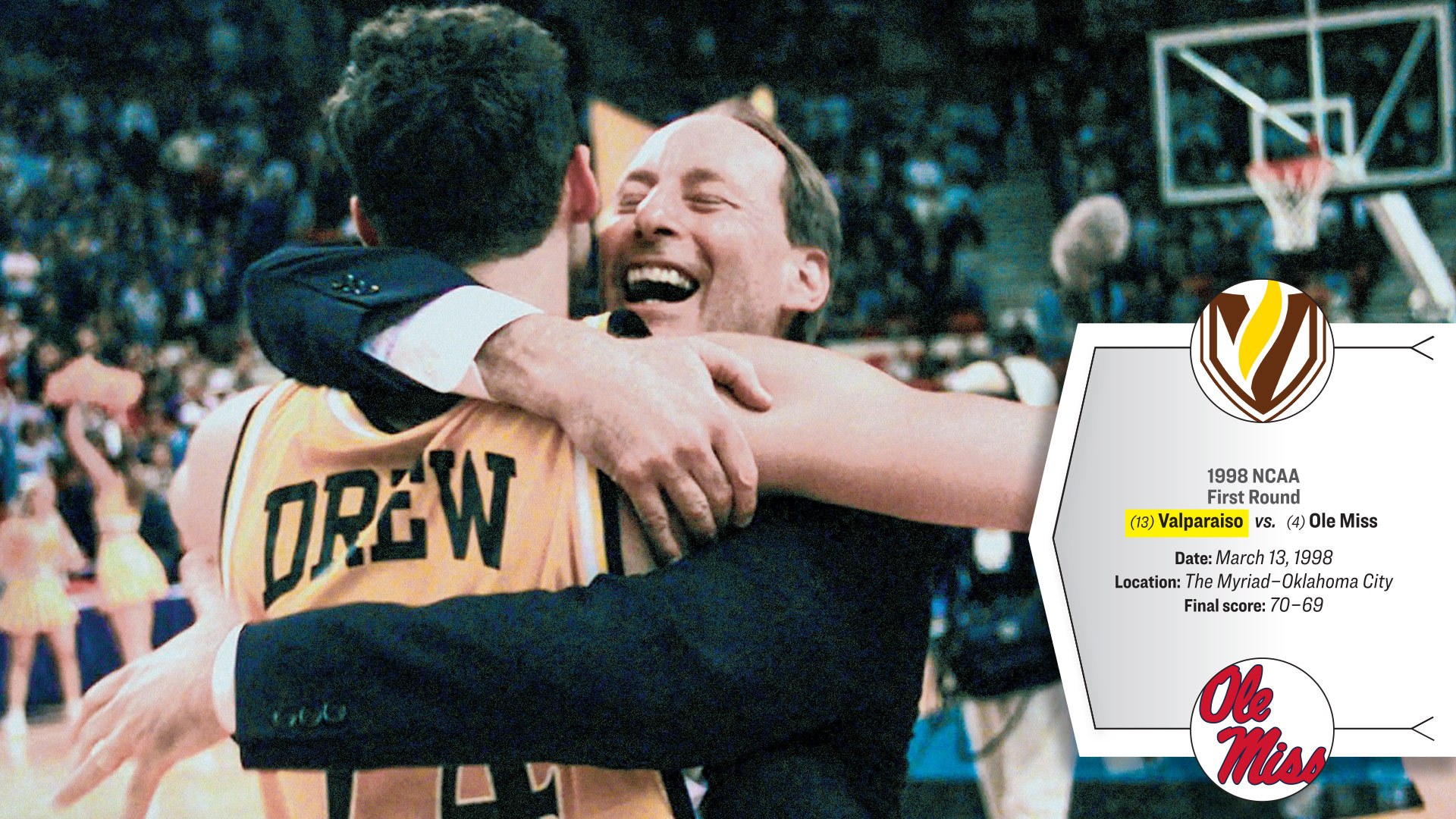 Bryce Drew sinks it, just like dad drew it up

Anyone who ever played rec league basketball remembers the coach’s son who led the team in bricked 3-pointers and squad-crushing nepotism. Valpo guard Bryce Drew was not that player.

Down 2 after a pair of missed Ole Miss free throws and a scramble for a loose ball, the Crusaders found themselves with 2.5 seconds to push upcourt and get off a shot. Homer Drew—Valpo’s head coach and Bryce’s father—called a play named “Pacer.” Valpo forward Bill Jenkins caught a half-court inbounds pass from guard Jamie Sykes and tapped it to Drew, who buried the 23-footer as time expired.

As memorable as the shot is Bryce Drew’s celebration—a belly flop at the top of the key that turned into a frantic dog pile—and the elder Drew swallowing his son up in his arms. Call it a Cinderella story and a family affair.