Mind Your Mummy Mommy, Mario // The Beauty of Kootie

Use the form below to send us your comments. If you are experiencing problems, please describe them.
Player Help | All Access Help
S1 E2 23min  TV-Y7
Hip and Hop steal the golden mummy case of Prince Mushroom-khamen, a dead ringer for Mario, and awaken the wrath of Mommy Mummy Mushroomkhamen who tears up Desert Land in search of her kidnapped son. The Mario Brothers come to the aid of the terrified Desert Landers, but Queen Mushroomkamen mistakes Mario for her son and drags him back to the tomb with her, and to make matters worse she mummifies Mario and puts him down to a 10,000 year long nap! Knowing that the only way our heroes can rescue Mario is to return the real prince to his mother, they blast into Kastle Koopa on a steam powered mummy sled and rescue the golden case. // King Koopa is siphoning off all the oil from Desertland to power his doomship! But when his Koopalings mess up and cross the oil pipes with the water pipes, things get really sticky. Desperate, the Sultan calls for the Mario Brothers. Air Date: Sep 15, 1990
Now Streaming 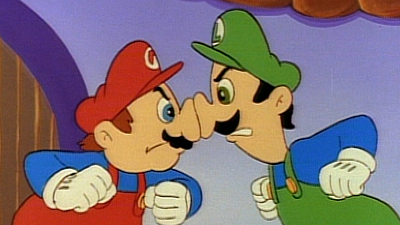