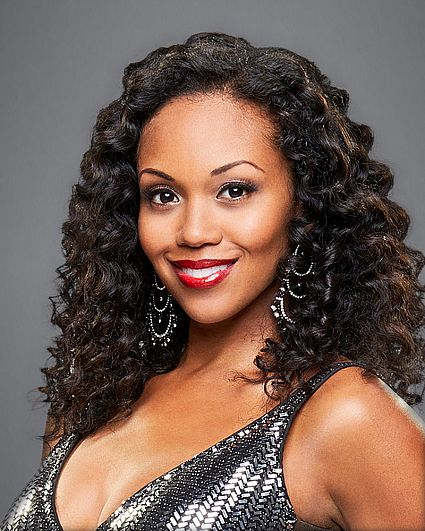 Amanda Sinclair
Mishael Morgan
Biography
Mishael Morgan returned to The Young and the Restless in September 2019 as Amanda Sinclair, a powerful and mysterious lawyer. She previously played the role of fan favorite Hilary Curtis from May 2013-July 2018.

For her work as Hilary Curtis, she received two consecutive Daytime Emmy nominations for Outstanding Supporting Actress in a Drama Series.

Morgan was born in San Fernando, Trinidad and is the middle child of three girls. At the age of five, her family immigrated to Toronto, Canada. She was studying Political Science at York University when a near death experience had her rethink her decision to go to law school. When she decided to pursue acting, Morgan impressed producers at her very first audition, landing her a role in Trey Songz "Wonder Woman" music video. Soon after, Morgan scored her first series regular role as Tracy Dupont-Roymont in YTV's Family Biz (2009).

Morgan continues to make a name for herself on both the small and big screens, landing roles on hit television shows like The Best Years (2009), Republic of Doyle (2012), and CW's Beauty & The Beast (2012) and Supernatural (2013). She has also appeared in feature films like Beat the World (2011), Casino Jack (2010), Total Recall (2012), and Swearnet (2013). She recently filmed starring roles in the television movies Hometown Holiday and A Widow's Nightmare.

In her spare time she enjoys watching movies, baking, working out, sharing laughs with friends and family, and eating. She and her husband are the proud parents of son Niam and daughter Naliyah.