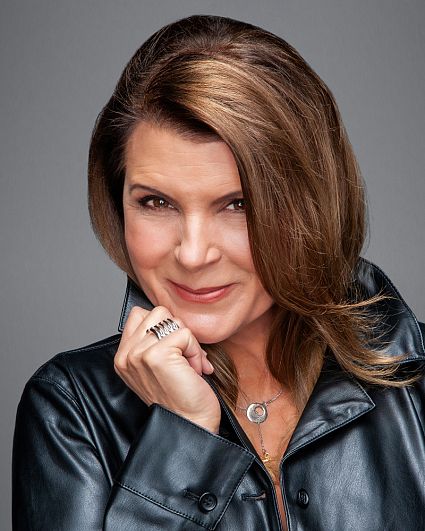 Kimberlin Brown portrays one of the most popular villainesses in daytime drama history, “Sheila Carter,” on The Bold and the Beautiful.

In the role of “Sheila Carter,” Brown debuted on The Young and the Restless in 1990 and crossed over to The Bold and the Beautiful in 1992. For the next three decades, Brown has played “Sheila Carter” on both shows. Brown’s recent credits include the film Five Hour Friends, co-starring Tom Sizemore, American Hero, and the award-winning short The Necklace.

Brown’s career began when she was discovered by famed modeling agent Nina Blanchard. She soon began acting in films such as Who’s That Girl with Madonna, 18 Again with George Burns, The Opposite Sex with Courtney Cox, and Eye of the Tiger, with Gary Busey. Brown guest-starred on many episodic prime-time television serials, including Matt Houston, TJ Hooker, Diagnosis Murder, and Six Feet Under. Her other daytime drama credits include long-time roles on One Life to Live, Port Charles, and All My Children.

Brown is the recipient of two Soap Opera Digest Awards for Outstanding Villain/Villainess for her role as “Sheila Carter” on The Bold and the Beautiful.

Brown’s busy acting career overlapped with one of her other passions, design. She successfully designed, built, and decorated spec homes in Las Vegas. In 2006, after many years of requests from friends, family, and acquaintances to help decorate their own homes, style their wardrobes, design their accessories, and having gone back to school to study design, Brown formally launched her own design business, K. Brown Design. She and her husband of over 30 years, Gary Pelzer, also own and operate several companies, including a small avocado farm in North County, San Diego.

Most recently, Brown began a career in political activism. As a proud American and Republican, she was a prime-time featured speaker at the 2016 Republican Convention in Ohio following Dr. Ben Carson. She fervently spoke about small businesses and specifically, women in business.

Brown enjoys skiing, boating, golfing, shooting, gardening, and most importantly, spending time with family. She spends her free time actively involved in charity work, including The Cystic Fibrosis Foundation and Susan G. Komen Foundation through American Airlines Celebrity Events and The Blue Angels Foundation, supporting our country’s veterans. Most notably, and demonstrating her true hands-on spirit, she has twice been a bone marrow donor. She has never met either recipient but has been told they are both doing well.

A Hayward, California native, Brown lives with her family in San Diego, CA. She celebrates her birthday on April 29.

The Bold and the Beautiful is the most-watched U.S.-produced daytime drama series in the world. The show debuted on March 23, 1987, and is currently in its 35th season. The Bold and the Beautiful airs on the CBS Television Network (1:30 PM / ET and 12:30 PM / PT) produced by Bell-Phillip Television Productions, Inc. Bradley Bell is the executive producer and head writer.