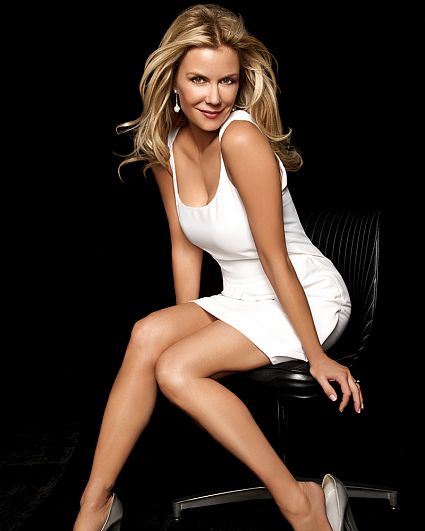 Katherine Kelly Lang originated the role of Brooke Logan, the show's quintessential heroine, at THE BOLD AND THE BEAUTIFUL's inception on March 23, 1987.

Lang is one of three children in a show business family.  Her parents are Keith Wegeman, an Olympic long‑jump skier who went on to play television's "Jolly Green Giant," and Judith Lang, a film, television and commercial actress.  Her grandfather was Charles Lang, a famed motion picture cinematographer.

Lang graduated from Beverly Hills High School where she concentrated more on becoming a jockey or training for the Olympics than studying to be an actress.  She took only a few drama classes in school, but fate guided her into her acting career. It began on the set of "Skatetown USA" when the producers took one look at Lang and cast her as the lead's (Patrick Swayze) girlfriend.  She signed with an agent and soon landed roles on "Happy Days," "Masquerade," "Magnum P.I." and several "Last Precinct" episodes.

Lang appeared in the Showtime miniseries "Training Camp... First and Ten." Soon after, she was cast as "Gretchen" on the Network's THE YOUNG AND THE RESTLESS, which led to appearances in films such as "The Nightstalker," "Mr. Boogedy" and "'Til the End of the Night."  Also, she is known for appearing in all of the Beach Boys' music videos which epitomize her as the modern California Girl.  Additionally, Lang guest-starred in "Lonesome Dove," playing a tough gunslinger determined to avenge her brother's murder, as well as in the original cable movie "Flashframe."

Lang loves sports and the outdoors, and spends her days off running triathlons and participating in Ironman competitions around the world, as well as riding her bike and horses.  She owns several horses and competes in 25-mile and 50-mile cross‑country races. At the special invitation of the Sheik of Qatar, she placed third in the International Desert Marathon in 1996.